A police chief ordered his officers not to try to rescue a drowning man as his van sunk into the River Thames, an inquest heard.

Surrey Police Inspector Gary Cross today admitted instructing officers at the scene not to go into the river to try to save John Byrne, the greenkeeper at the world-famous Wentworth Golf Club.

Witnesses at the river bank heard screaming and shouting from the submerged vehicle, the coroner was told.

His body was later pulled from the vehicle which sank 12ft below the surface following the incident at Shepperton, Surrey.

Father-of-one John Byrne, pictured, died aged 39 in 2016 when he drove his van into the River Thames. An inquest heard today Surrey Police officers were told not to dive in to try to rescue him because the risk was ‘too great’ and officers did not have proper training

The jury of seven men and four women heard that Mr Byrne had been heard screaming and shouting while his vehicle sank and began drifting down the Thames towards a lock. His van was found in water 12ft deep, 15ft from the river bank.

Inspector Cross told the inquest in Woking how he was in charge of the Surrey Police control room on December 8, 2016, when the father-of-one, whose wife was expecting twins within days, drove his vehicle into the Thames.

The inspector confirmed to Assistant Surrey coroner Darren Stewart that he had personally made the direction to officers not to go into the water.

Inspector Cross told the jury: ‘The fact the vehicle was fully submerged and floating down the river, officers would have been ill-equipped and not trained to go into a fast-flowing river with undercurrents.

‘I’m not sure we have significant training to allow us to go into the river in our occupation. I remember having some training as regards to entering water some years ago.

‘The recollection I have was that to go into deep or fast flowing water was something we would discourage.

‘I thought they would distract from any potential rescue efforts of that vehicle by boat crews by putting themselves in serious risk and which I didn’t believe would have a positive effect on what was happening at that time.

‘I would sum up by calling it risk vs reward. I wouldn’t have said that lightly. I felt the risk was too great in those circumstances. I would say that if, after putting that out, a unit would have called up to challenge it I would have happily reviewed that decision.’

The assistant coroner then asked if any of the officers at the scene had a different view and said one was having difficulty putting on a life preserver over their radio and belt.

Inspector Cross said: ‘I would always listen to an officer on scene if they had a different view.’ 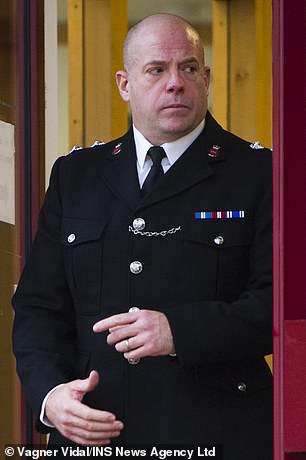 Despite three 999 calls being received by police call operators, Inspector Cross confirmed that he only became aware of Mr Byrne at 8.20pm when a member of the public called the police.

Inspector Cross told the inquest in Woking, Surrey: ‘I recall the first I was aware of it was that sadly he had driven his van into the Thames – that was the first point I had any knowledge of Mr Byrne.

‘We had a call from a Mr Andrew Silk to say a male has driven a van into the river and the driver was still in it.

‘We called the fire services and the force dispatched our specialist resources. The call handler in the call centre was still getting information from the person on the other end of the call.

‘We called a helicopter at 8.22pm and learned a drone operator was available, we just got whatever resources we had available to give us the best view and the best picture we could of what was going on.’

He said: ‘At 8.22pm it was reported that the windscreen was fully submerged. Then the report coming in said “can’t see the male any more. Informant can hear the male shouting”.

The jury was told by 8.26 the control room was receiving information from officers at the scene.

Boat crews were rushing towards the drifting vehicle and fire services were deploying towards the Shepperton Lock, the keepers of the Thames Lock systems had been contacted.

Then at 8.27pm, the order came through the police radio systems: ‘Units advised – no officers to go in water.’

The coroner also revealed Mr Silk was told not to go into the river as well by a call handler.

Inspector Cross said: ‘We would always discourage, unless if he was appropriately trained to do something like that.’

At 8.47pm, marine resources, boats brought by the fire service, were on the scene but no divers had reached the bank.

The coroner asked: ‘Given it was a half hour after the vehicle submerged and no one had been seen coming out the river. you’re not realistically expecting anyone to come out at this point?’

Inspector Cross agreed and the inquest heard that it was not until 9.36pm that air bubbles could still be seen rising to the surface of the water from 39-year-old John Byrne’s sinking van and divers entered the water for the first time to confirm that he was dead.

His body was recovered at 9.48pm and he was identified as John Byrne, from Shepperton, Surrey, based on identification found with him.

Police records updated after 10pm showed the van had come to rest at a point in the river 15ft from the bank, where the entry point was surrounded by a barrier.

At 11.58pm sonar equipment discovered the vehicle 12ft below the water. 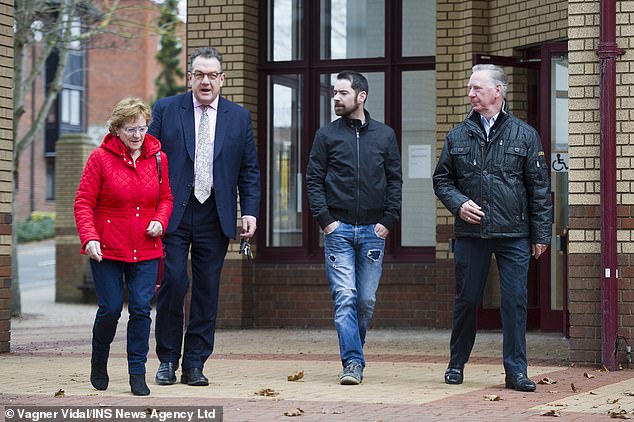 Last week his widow Cheri told the inquest her late husband had been ‘dying inside, bit-by-bit’ and had looked ‘possessed and like his soul was gone’ the last time she saw him alive.

The qualified nurse said first time she knew about the 39-year-old’s plans to kill himself was when she received a police voicemail message on the day of his death, she said.

She added the mental health professionals who had been managing her husband’s care after he was discharged from a mental health ward knew that he had a suicidal intent but did not warn her.

Mrs Byrne told the inquest that at the time of her husband’s ‘breakdown’, their son Oisin was two and she was heavily pregnant with twins.

She added: ‘I didn’t know he was receiving treatment for mental health until his breakdown in October 2016.’

Mrs Byrne said she had thought occasional GP visits had been to do with Mr Byrne’s sciatica, and had put his low mood down to chronic pain.

She continued: ‘He had been prescribed anti-depressants but he said he didn’t want to take them. And he never did take them, I’ve still got the packet unopened.

‘His episode started in October 2016, I wouldn’t know what the trigger was. I tried to get hold of him at work one day and I couldn’t. I phoned his work and they said he hadn’t been in that day and previous days.

‘He had been saying he’d been going to work but he’d been sitting in his van all day and coming home at night.

‘I don’t know why he wouldn’t discuss it with me. He had learned how to wear a mask when he came home every night to me and Oisin, to try to be the best husband and dad he could, when inside he was dying bit-by-bit.’

The inquest heard that Mr Byrne had been working as the groundsman at the prestigious Wentworth Golf Club.

Mrs Byrne described an incident on October 30, 2016, when her husband revealed he had ‘blown through every penny of their savings’ and the couple was now in debt because he had been gambling and had taken her card.

An argument ended with her calling the police, but she made clear her husband had never been violent towards her or their son.

He had previously gone missing before and his wife said she realised he was ’emotionally sick and damaged’.

She told the inquest her husband had self-harmed while at St Peter’s Hospital in November 2016 having mental health treatment because a member of staff had incorrectly told him she was taking out a restraining order against him, for her and her son.

And she said she was given no advice from the Home Treatment Team from Surrey and Borders Partnership NHS Healthcare Trust on how to care for him once he was discharged on December 6.

Mrs Byrne said: ‘We were just drowning. We had no help, no support. I didn’t know how to support my husband, he was sick in trying to come home to us. I didn’t know what to do or how to do it and this was all in front of our little boy.

‘It wasn’t right, it just wasn’t right. We tried to go out shopping but everything was too much for him, he was overwhelmed.’ 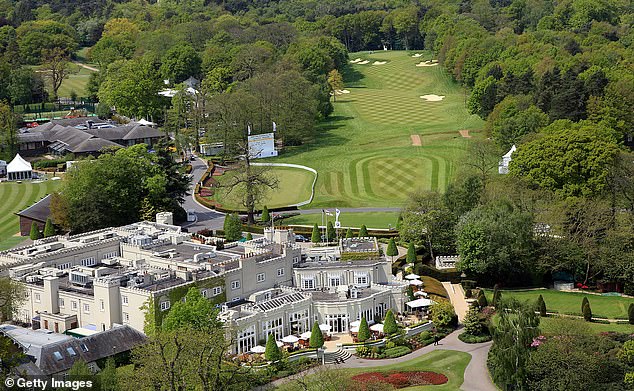 Mr Byrne worked as a greenkeeper at the world-famous Wentworth golf club in Surrey, pictured

She said that on the day of Mr Byrne’s death on December 8 2016 she could not see any big difference in his demeanour when he said he was going out for a walk to clear his head.

Mrs Byrne described the last time she saw her husband alive, when he returned home after several hours at the nearby Barley Mow pub. She told the coroner: ‘He came back and he wasn’t right. He looked like he was possessed.

‘He didn’t seem drunk, he just seemed possessed.  His eyes were piercing, his face was very stern.

‘He did smile, but it was the clown-of-clowns smile.  He wouldn’t take his jacket off, his hat off, his gloves off, like he wanted to be there but didn’t want to be there.

‘He was trying to be really good in front of our little boy, but it didn’t feel safe in the room.

‘I pretended to write Christmas cards while he was on the floor with Oisin, and Oisin was really enjoying himself but it was like I didn’t recognise him.

‘How do you describe someone when it looks like their soul’s gone? I can’t describe it, I don’t have the words.

‘I went upstairs and I was putting Oisin to bed, and Jack came up and put his head around the door and smiled, and I think he was saying goodbye.

‘And that was the last time me and Oisin saw him alive.

‘And as for his twin daughters, the only time we brought them together with him was when they stood by their dad’s coffin in the church.’

She said she received a voicemail from police shortly after that, at 6.42pm, telling her the Home Treatment Team knew John was planning to drive into the Thames and that they wanted to find him.

She called them back to report the van had now gone, which she realised when she came downstairs from putting Oisin to bed.

For confidential support call the Samaritans in the UK on 08457 90 90 90, visit a local Samaritans branch or click here for details.