Police are investigating reports that a gang dressed as the Ku Klux Klan were pictured dressed outside an Islamic Centre in Northern Ireland.

Photographs of the group outside the centre in Newtownards County Down have flooded social media.

The incident in the town was reported to the Police Service of Northern Ireland at 5pm on Sunday and the force is treating it as a hate crime.

Inspector Richard Murray said: ‘We are also aware of images that are circulating that show people dressed as Ku Klux Klan members.

‘Our enquiries are ongoing, and we are treating this as a hate incident at this time.

‘Hate crime, in all its forms, is totally unacceptable. It is the responsibility of each and every one of us to ensure that we live in a society where diversity is respected.

‘If you or someone you know is the victim of a hate crime please contact police or your local support agency. ‘ 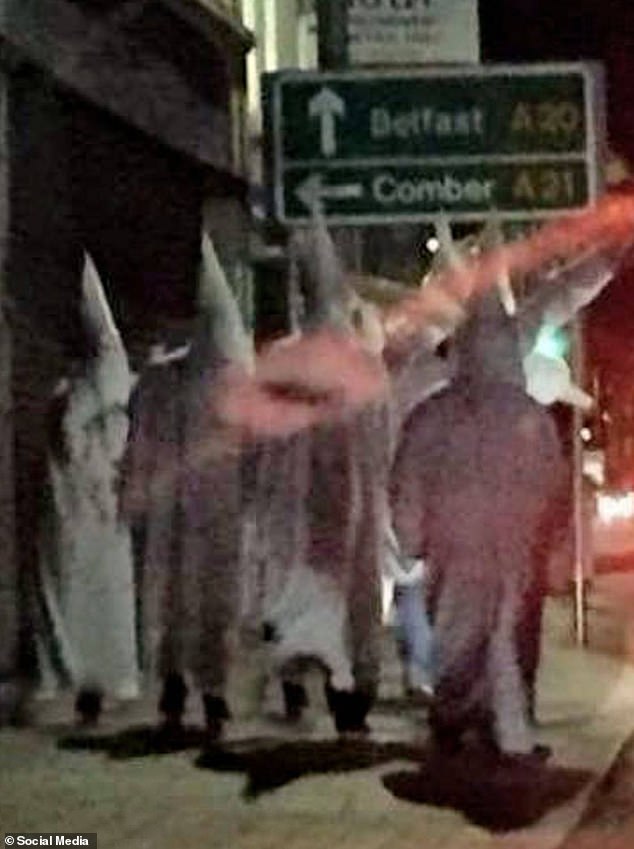 Speaking to the Belfast Telegraph, she said: ‘I’ve seen the pictures on Facebook and social media of this group of men, women or whatever.

‘Some people might try to say they were out for Halloween but I’d have to say if that’s the case then these are certainly not the most appropriate costumes to be wearing.

‘It is not appreciated by our community, it is not funny and it should definitely not be treated as a joke.’

She added that CCTV cameras are installed all around the centre of Newtownards and that the group would have been caught on camera.

She added that she hoped police would be studying the footage.

The Ku Klux Klan, commonly called the KKK, is a racist group established by white supremacists in the United States.

The group were notorious for killing black people during the civil rights movement in 1960s America.