Police make murder arrest after man, 63, is run over and killed in ‘targeted attack’ hours after Stonehenge summer solstice celebrations

A 23-year-old man has been arrested on suspicion of murder after a car struck down and killed a pensioner in a suspected targeted attack, just hours after the summer solstice celebrations.

Murder squad detectives are investigating the fatal collision on the A303 Eastbound which took place on Friday afternoon at 4.50pm near Solstice Park in Amesbury, Wiltshire – just seven miles from world heritage site Stonehenge.

A vehicle is believed to have intentionally hit the 63-year-old man before driving off.

The victim was rushed to hospital in an air ambulance but sadly succumbed to his injuries and passed away in the early hours of this morning, triggering a murder investigation.

A police spokesman said the victim’s family were today being supported by specially trained officers.

The spokesman said it was a busy road, and believed the horrific incident would have been witnessed by shocked commuters driving home for the weekend.

They would have witnessed the attacker flee the scene after the vehicle failed to stop, the spokesman added.

Usually a sleepy civil parish Amesbury, home of Stonehenge, had been hosting an estimated that 10,000 people on Friday as they gathered at the Neolithic monument to greet the start of the longest day of the year, according to Wiltshire Police.

Following investigations, officers have today confirmed a 23-year-old man from Watford, Hertfordshire, was arrested on suspicion of murder, and was held in custody at Gablecross Police Station in Swindon, Wiltshire. 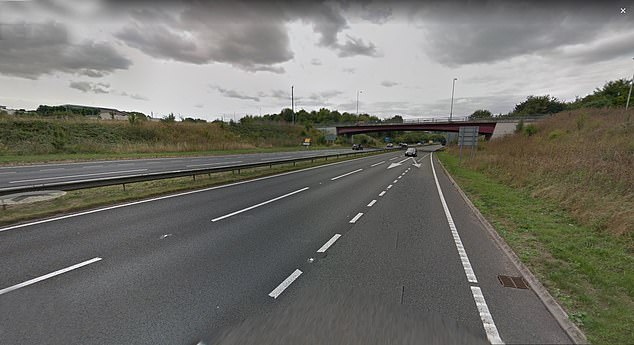 The fatal collision on the A303 Eastbound which took place on Friday afternoon at 4.50pm at Solstice Park in Amesbury, Wiltshire, (pictured) just seven miles from world heritage site Stonehenge

The scene of the incident was just fifteen minutes drive along the A-road from the famous Stonehenge site – and just hours after revellers were leaving the site following Summer Solstice 2019, the longest day of the year.

It was feared the fatal incident may have been connected to the astronomical celebrations just hours before.

Speaking this afternoon a spokesman for Wiltshire Police said: ‘We don’t know at this stage, but we will be pursuing all lines of enquiry.’

One local resident, who did not wish to be named, said: ‘I was stuck in traffic for hours while I was on my way to the The Amesbury Archer Harvester near Solstice Park – I had thought it was rush hour traffic, but it was only when we saw the police officers, the cordon and the helicopter approaching the A303 we realised it was something serious.

‘When we got there, everyone was talking about it – they had also seen the police and the helicopter.’ 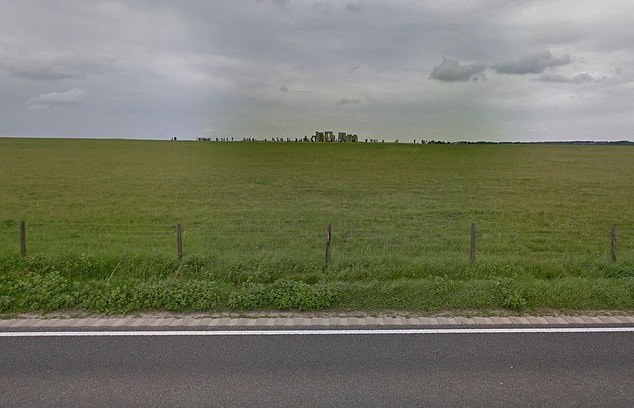 Another woman said: ‘We didn’t hear or see anything – we obviously heard about it on the news. It’s terrible – and we saw the traffic building up over the afternoon.’

One witness, Sarah Levett (corr), wrote on Facebook: ‘There were two ambulances and one helicopter in the field next to it. Seemed very serious.’

Another witness was in a coach full of school children, just moments behind, caught in the lengthy traffic following the horrific incident.

Sarah Armstrong (corr), wrote: ‘I was seconds behind it on a coach full of 10 & 11 years returning from a residential trip to Devon… wasn’t nice at all.’

Det Supt Julie Mackay who is leading the investigation said: ‘We would like to speak anyone who may have seen this collision on Friday.

‘This is a very busy road and I believe there would have been a number of drivers and road users who would have seen this incident.

‘Also, if you have any dash-cam footage of this please come forward. Anyone with further information should call 101 and quote crime reference number 54190059972.