By George Odling and Neil Sears for the Daily Mail

The mounted police officer seriously injured when her horse bolted during a Black Lives Matter protest has revealed how she is ‘just about hanging in there’.

But PC Nicky Vernon said the support she had received had reminded her the ‘thin blue line’ was ‘unbreakable’.

One of those offering support was grandfather-of-three Chris Frost, 58, whose life she saved after a crash.

PC Nicky Vernon (right) said the support she had received had reminded her the ‘thin blue line’ was ‘unbreakable’ and she has been helped by Chris Frost, 58, (left) whose live she saved after a crash

He told of his horror at seeing video footage of PC Vernon being knocked from her horse when she collided with a traffic light in Whitehall last Saturday after thugs threw missiles at them.

She is in hospital with a collapsed lung, broken collarbone and shattered ribs.

Mr Frost, a self-employed builder, has stayed in touch with the officer who came to his rescue in March 2018 when he suffered a heart attack after his car crashed on the A20 Sidcup bypass in Kent.

PC Vernon, who was on her way to work, pulled over and dragged Mr Frost from the car. She performed CPR on him for ten minutes before an off-duty firefighter joined her.

When paramedics arrived, they used a defibrillator to restart his heart. He was in intensive care for four days and was fitted with a pacemaker before being discharged. 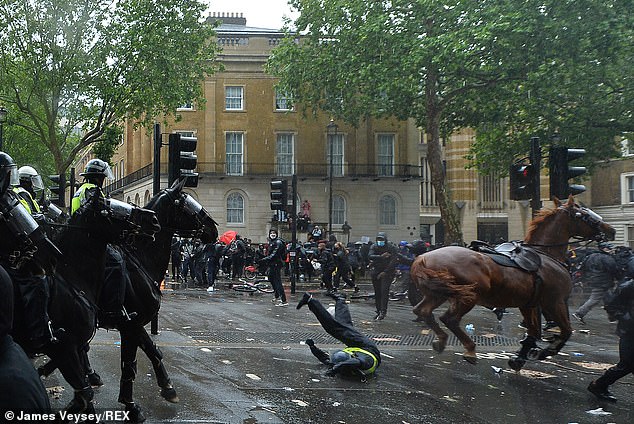 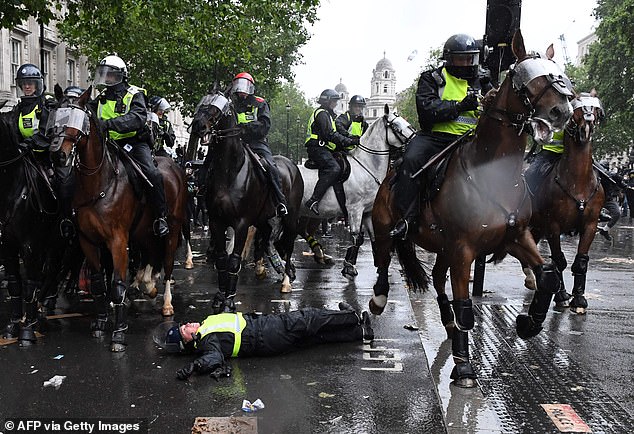 PC Vernon is in hospital with a collapsed lung, broken collarbone and shattered ribs

Mr Frost said yesterday: ‘I’m eternally grateful – she saved my life. I hope she gets better and suffers the least amount of trauma possible. Nicky was injured doing a job… to protect the public.’

In an emotional post on Facebook this week, PC Vernon wrote: ‘I’m just about hanging in there with the outpouring love and support from my family, friends and even strangers. It’s humbling to receive such support and a constant reminder of the strength of that blue line.’

She added: ‘For some reason it’s referred to as “thin” but it seems it’s made from something stronger than you can imagine. Just unbreakable.’

She urged fellow officers: ‘Hold it for me until I get back.’