London has been rocked by three stabbings in the space of ten hours as blood poured onto the capital’s streets following the easing of lockdown.

Separate attacks yesterday saw a young man killed in Poplar, a police officer knifed in Hendon and another man left fighting for his life after an assault in Haringey.

The attacks came just hours after another victim, stabbed to death in Dulwich on Wednesday, was named and pictured for the first time.

The fatality in east London last night, near Crossharbour DLR station, is being treated as murder, and is the 60th in the city this year.

Police were called to Alexia Square shortly after 6pm and found a man believed to have been in his late teens or early 20s with stab wounds.

Despite emergency services carrying out first aid the man was pronounced dead at the scene.

A second man, believed to be in his late teens, was rushed to hospital by London Ambulance Service.

A crime scene is in place and no arrests have been made, the Metropolitan Police said.

The attack came less than five hours after a police officer was stabbed chasing a man suspected of having a knife.

Scotland Yard said officers were called at around 1.15pm to reports of a man seen in possession of a knife in Hendon Way, north-west London.

After tracking down the suspect, the man fled from officers who gave chase and one was stabbed in the arm, the force added. 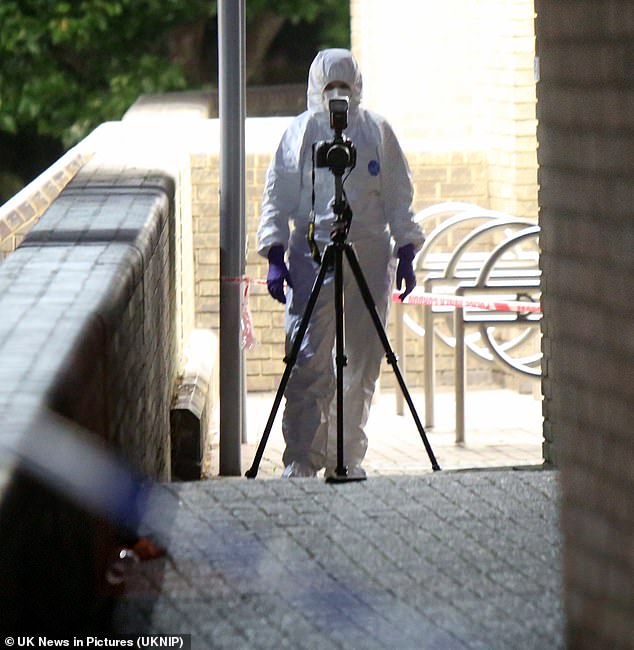 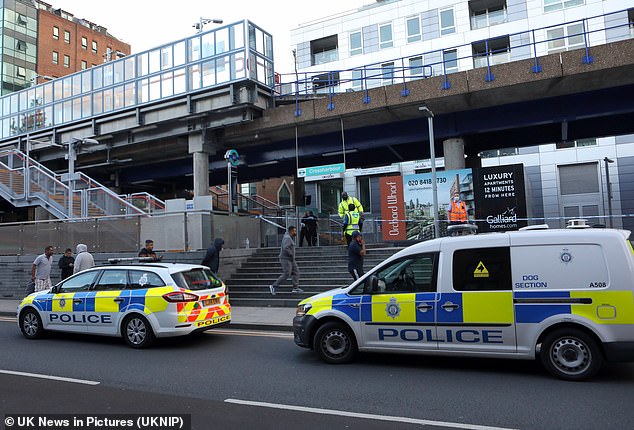 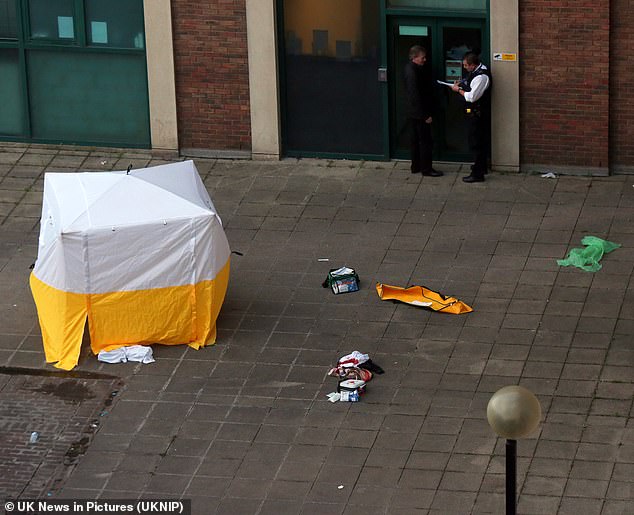 The man was then tasered and arrested on suspicion of grievous bodily harm, it added.

Police said the man was also taken to hospital as a precaution.

The officer has been taken to hospital for treatment and his condition is not life-threatening, the Met added.

North West North Area Basic Command Unit commander Roy Smith said: ‘This is another example of the dangers our officers face on a daily basis as they go about their duty protecting the people of London.

‘Knowing that there were reports of a man in possession of a knife, this police constable and his colleagues ran to challenge and apprehend him – these are truly brave actions.

‘I have visited the injured officer in hospital and thankfully he should make a full recovery from his injury.’

Mayor of London Sadiq Khan said: ‘In an appalling incident a police officer was stabbed while doing their duty and protecting Londoners. I’m thankful their injuries are not life-threatening and send my best wishes for a swift and full recovery.’ 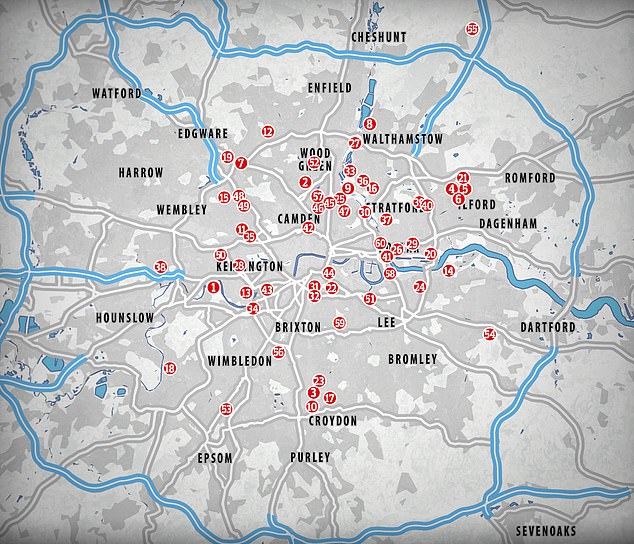 Then at around 10.40pm last night, another man was knifed in Westbury Avenue, Haringey.

The 23-year-old has been taken to hospital where his condition has been assessed as critical.

There has been no arrest at this early stage.

Detective Inspector Paul Ridley from North Area CID said: ‘This was a sustained attack which has left the victim fighting for his life in hospital. It is absolutely crucial that witnesses come forward.

‘The nearby Westbury Public House was open and I urge any patrons that may have seen the assault or the offenders making off to come forward.

‘I would also like any persons with private or dashcam footage on their vehicles to present that to the investigation team as there could be vital clues.

‘If you know who is responsible then I urge you to do the right thing and inform Police or Crimestoppers in confidence.’

Police also yesterday identified the victim of a stabbing in Dulwich on Wednesday evening as 18-year-old Donnell Rhule.

Homicide detectives from the Specialist Crime Command are leading the investigation. They believe Donnell was attacked on Lyall Avenue before making his way to a parade of shops on Seeley Drive.

A 26-year-old man was arrested on the evening of 10 July on suspicion of murder. The man has been taken into police custody. 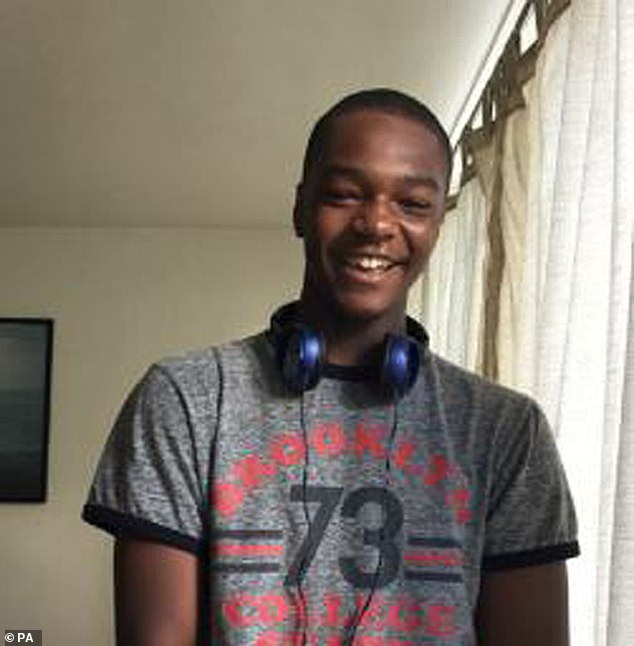 DCI Rob Pack, Senior Investigating Officer, said: ‘I would like to speak with anyone who witnessed the stabbing or who saw anyone leaving the scene. This is a generally quiet area, so I am certain that a number of people will have seen or heard something significant.

‘Although one person has been arrested we are still very much in the early stages of the investigation. We know a number of suspects and vehicles were involved in this murder and I’m appealing for help in identifying and tracing them.

‘If you have any information that can help the investigation, no matter how small you may think it is, please get in touch. It may be that vital piece of evidence that completes the overall picture. You can be assured that you will be dealt with professionally and any concerns you may have will be addressed.’

Anyone with information is asked to call the incident room via 101 quoting reference CAD 6306/8July. Alternatively, to remain anonymous contact the independent charity Crimestoppers on 0800 555 111.

Ch Supt Colin Wingrove, Commander of the Met’s Central South Command Unit, said: ‘I am saddened to hear of this tragic murder and our thoughts are with Donnell’s family, friends and the wider community. We are committed to bringing them the justice they deserve and we are supporting the Specialist Crime Command who lead the investigation.

‘Our local safer neighbourhood officers will provide an increased policing presence in the coming days to provide reassurance and support. I urge anyone with any information about the events leading to this tragic loss of life to come forward and tell us.’

In the last week alone there have been four fatal attacks, coming after more coronavirus restrictions were lifted by the Government last Saturday.

Forces insisted earlier in the pandemic that they were braced for an explosion of violent crime with tensions that have built up during lockdown spilling onto the streets.

Dr Simon Harding, director of the National Centre for Gang Research at the University of West London, and a former Home Office and Metropolitan police adviser, told the Guardian in May: ‘We’re going to have the backwash of everything that’s happened over the last two months.’

‘There’s a crimewave coming, a tsunami on the way.’