PC Mia Kerr came across two members of the public trying to save a badly wounded victim in a courtyard. The young officer drew her baton and guarded the courtyard’s entrances so they could treat 36-year-old Frenchman Sebastien Belanger

Paramedics did not know where at least four victims of the London Bridge terror attack lay dying, an inquest heard yesterday.

Ambulance crews waited 100 yards away for nearly 40 minutes as members of the public and police officers desperately tried to save the seriously injured.

As the atrocity unfolded, junior police officers made a series of frantic radio calls for paramedics to help them. But senior ambulance staff claimed they never received those calls from the police or their own control room.

Instead, they were preoccupied with setting up incident command structures, rather than treating the injured, the Old Bailey heard.

Senior paramedic Andrew Beasley even admitted he still did not know where four victims lost their lives, two years after the attack.

The absence of paramedics meant badly wounded victims had to be carried to ambulances.

PC Clint Wallis, who was one of the first officers to arrive, tried in vain to save the lives of three victims by giving them CPR.

Gareth Patterson QC, acting for six victims, said it must have been ‘immediately obvious that a lot of paramedics and ambulance service personnel would be needed’.

PC Wallis agreed, saying: ‘We were asking members of the public if they could see paramedics to flag them down and ask them to assist us. It became quite clear there were no ambulances or paramedics being sent to us and they were probably being held at a rendezvous point away from the scene.’

As three knife-wielding fanatics rampaged through the streets, PC Mia Kerr came across two members of the public trying to save a badly wounded victim in a courtyard. The young officer drew her baton and guarded the courtyard’s entrances so they could treat 36-year-old Frenchman Sebastien Belanger. 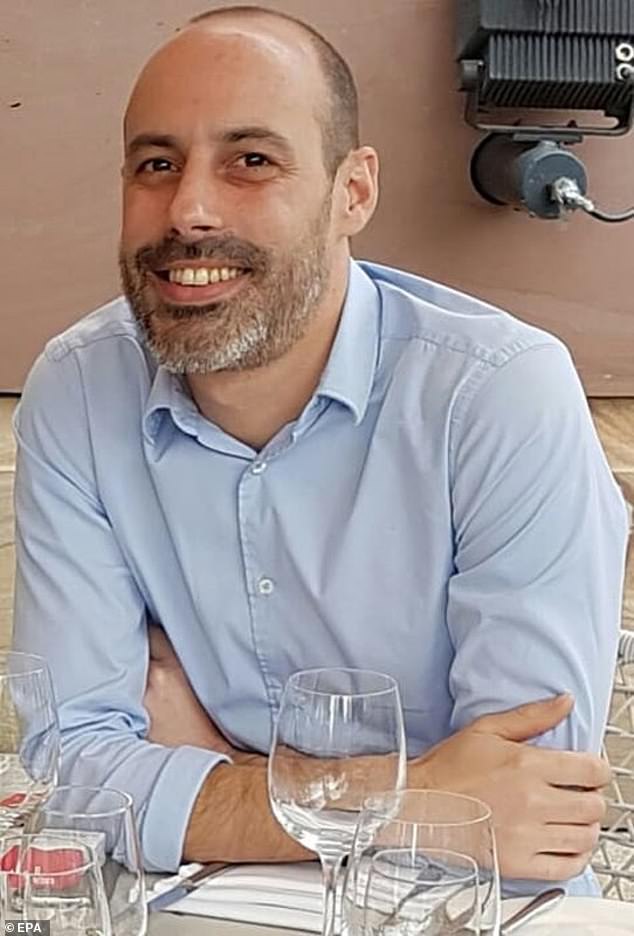 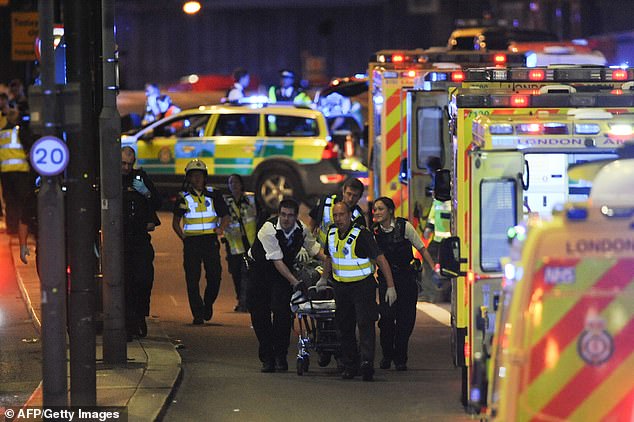 Police said it was difficult to find paramedics on the night of the 2017 attack, pictured

PC Kerr, who later received a commendation for bravery, admitted she was scared, adding: ‘I was exposed. I felt like I was the only person people were looking to for help. I only had a year’s service on the response team.’

The policewoman said she had been asking for paramedics on her radio ‘right from the word go’ but none arrived for more than half an hour. Mr Patterson thanked PC Kerr for her role in trying to save the French chef, who died minutes later. She arrived at London Bridge at 10.12pm – six minutes after Kharum Butt, 27, Youssef Zaghba, 22, and Rachid Redouane, 30, launched their attack.

Before being shot dead by police, they murdered Christine Archibald, 30, and Xavier Thomas, 45, with a van and fatally stabbed Sara Zelenak, 21, Alexandre Pigeard, 26, Kirsty Boden, 28, James McMullan, 32, and Ignacio Echeverria, 39, as well as Mr Belanger. Another 48 people were injured. The inquest continues.