Police should not automatically grill terror suspects on their religion

Police should not automatically grill terror suspects on their religion in the wake of the Westminster attack, a watchdog has said.

Max Hill QC, the independent reviewer of terrorism legislation, made the recommendation in a review of the investigation launched following the attack in March last year, called Operation Classific.

Twelve people were arrested after terrorist Khalid Masood killed five people before his was shot dead but those detained were all released with no further action.

Those arrested included Masood’s relatives, friends and people who lived at Birmingham addresses that he had used.

Mr Hill’s report found that none of the suspects were arrested on the grounds of their ethnicity or religion, but that some were quizzed about their faith due to Masood’s extremist views and support of Islamic State.

He said: ‘I regard this as providing a justification for the religious context of some of the questions posed in interviews during Operation Classific.

‘However, every interview is case specific and it does not follow that it would be appropriate to ask very detailed religious questions in every case where a Muslim has been arrested on suspicion of terrorism-related activity.

‘I therefore recommend, in the interest of clarity, that the police take this opportunity to review training on the circumstances and extent to which such questions will be necessary in future interviews.

‘I accept, however, that questioning detainees about religion or any other matter occurs with careful thought and planning.’ Max Hill QC (pictured) said none of the suspects were arrested on the grounds of their religion, however added that some were quizzed about their faith due to Masood’s extremist views

Mr Hill’s 44-page assessment also called for ‘greater thought and clarity’ on whether and when it is necessary to transport detainees sometimes hundreds of miles from where they are arrested.

Three of the individuals were arrested in Birmingham but questioned in London.

In another finding, the senior barrister recommended that ministers consider giving police the option to release suspects arrested under the Terrorism Act on bail before charge.

Mr Hill concluded that a consequence of the circumstances and pace of the post-attack investigation turned out to be the arrest and detention of 12 people ‘whom it transpired were not culpable and who were consequently all released without charge and, in police language, NFA’d (no further action)’.

The reviewer added: ‘Having analysed the hour-by-hour events as they unfolded, I conclude that it would be wrong to criticise Op Classific for the number of arrest and detention authorisations. 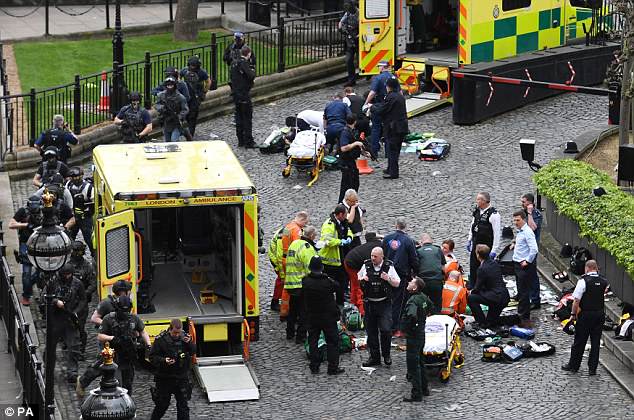 ‘Doing the best that I can to recreate the investigation ‘in the moment’, based upon all of the investigation materials made available to me, it seems to me that each such decision was reasonable and proportionate at the time.’

Ben Wallace, the security minister, added: ‘Our comprehensive terrorism legislation gives the police the powers they need to investigate terrorist atrocities and we were all witness to their swift and effective work following the Westminster attack.

‘We are pleased that Max Hill QC has concluded that the investigation was impressive, flexible and fast-moving.’