Police think drone may have filmed rape attack in woodland

A drone could have captured the horrific moment a woman in her 20s was raped in broad daylight, according to police.

The victim was walking along a path through woodland at Amberswood Nature Reserve in Wigan when two men began to follow her, Greater Manchester Police say.

Officers say that two other men were stood in front of her as she turned a corner, and she was then raped. The attack was reported at about 2.15pm last Sunday.

The victim was walking along a path through woodland at Amberswood Nature Reserve (file picture) in Wigan when two men began to follow her, Greater Manchester Police say

Someone was flying a drone in the area at the time, police claim, and may have inadvertently captured footage. They have now asked the pilot to come forward.

Detectives also want to trace and speak with a number of potentially key witnesses – a person wearing a white coloured coat and two people who were walking a dog.

Detective Inspector Rick Thompson said: ‘We’re following a number of lines of enquiry but we need anyone who may have heard or seen something out of the ordinary to get in touch with us as soon as possible.’

Amberswood, created as a result of mining, is a 400-acre nature reserve with lakes, ponds, woodlands and wetlands – popular with runners, ramblers and dog walkers. 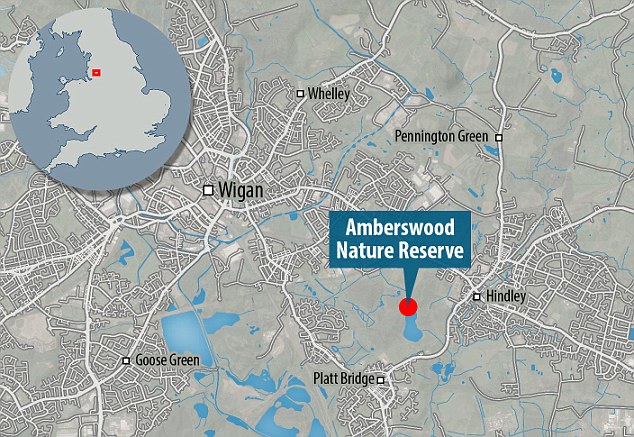 Police said the woman is being supported by specially trained officers, and additional patrols remain in the area while the investigation continues.

Mr Thompson added: ‘I appreciate this is a remote area of land but it is a place where a lot of people go for a walk or take their dogs and we know that there were people in the park at the time.

‘We are particularly interested in speaking to a member of the public who was believed to be flying a drone around the time of the incident and may have inadvertently captured some footage that could help us. 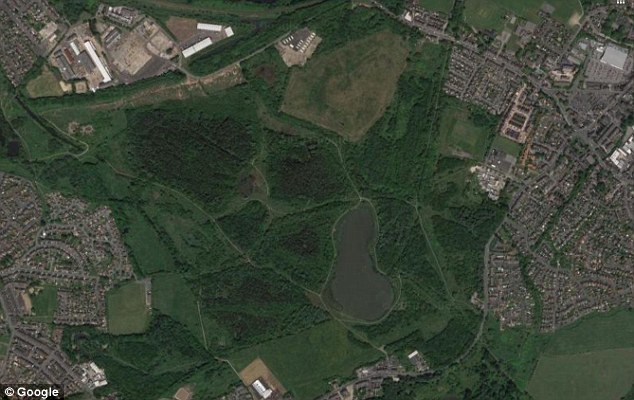 Officers say that two men were stood in front of the woman as she turned a corner at Amberswood Nature Reserve (pictured from above), and she was then raped

‘We would also like to speak to a person who was wearing a white coloured coat and two people who were walking a dog. These people may hold key information and I want to urge them to please contact us as soon as they can.

‘If anybody else believes they may have seen or heard something, no matter how small or insignificant you think it may be, to please call us.’