Police in Thailand have used water cannons against pro-democracy protesters in Bangkok as thousands gathered to demand the release of activists.

The demonstrators, part of an anti-monarchy movement that has been rallying for months – defied an emergency decree banning large gatherings for a second night running.

Some 2,000 protesters chanted for the release of arrested activists and hurled obscenities at Prime Minister Prayut Chan-O-Cha in the city’s main shopping mall district before several hundred riot police advanced towards them in formation, calling on the protesters to go home or face the water cannon.

A few metres away, hundreds of activists blocked the road behind a makeshift barrier, calling for the riot police to ‘get out!’ and singing the Thai national anthem.

Police fired water from the cannon, pushing back the protesters who used umbrellas against the blue liquid.

Onlookers claimed the liquid was laced with chemicals and caused irritation to the eyes of some of the protesters. 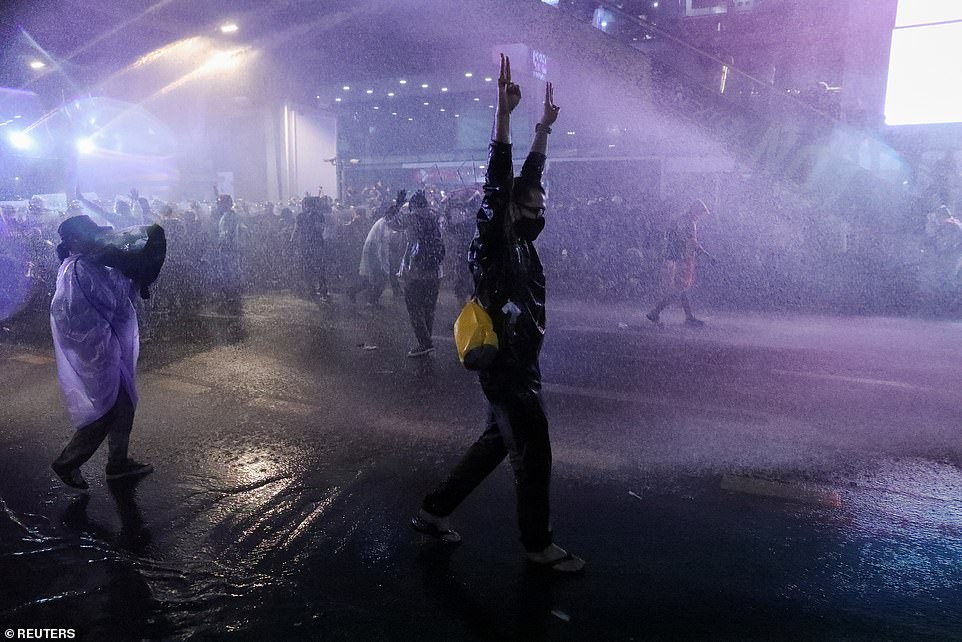 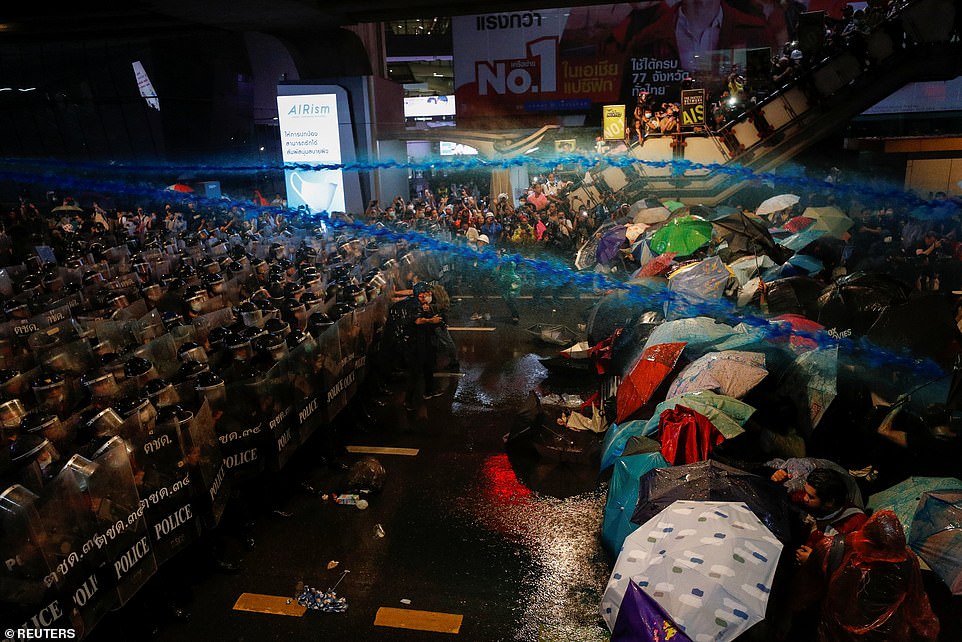 Police fired ‘chemical-laced ‘water from the cannon, pushing back the protesters who used umbrellas against the blue liquid

‘The younger generation will not stand for the status quo any longer,’ design student Pim, 20, told AFP news agency earlier on Friday, as the protesters raised their arms to display a three-fingered salute adopted from the Hunger Games movies.

The kingdom’s political elite has been jolted by a youth-led movement that has demanded the resignation of Prime Minister Prayut and issued a once-taboo call for reforms to Thailand’s powerful monarchy.

Friday’s protests came just hours after around two dozen prominent activists were arrested, including two under a rarely-used law prohibiting violence against the queen. 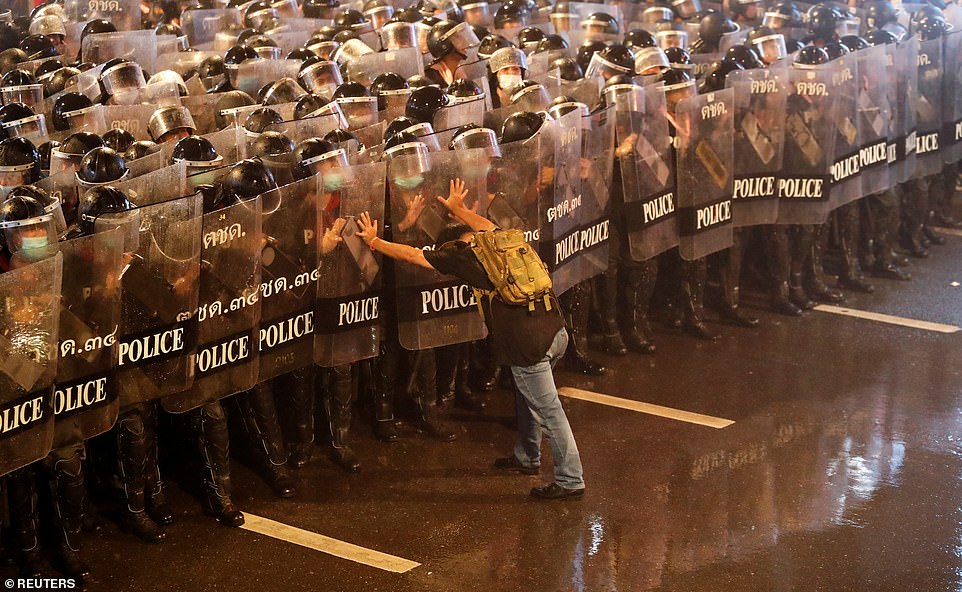 The kingdom’s political elite has been jolted by a youth-led movement that has demanded the resignation of Prime Minister Prayut and issued a once-taboo call for reforms to Thailand’s powerful monarchy. Pictured: A protester pushes against police riot shields at Friday’s rally 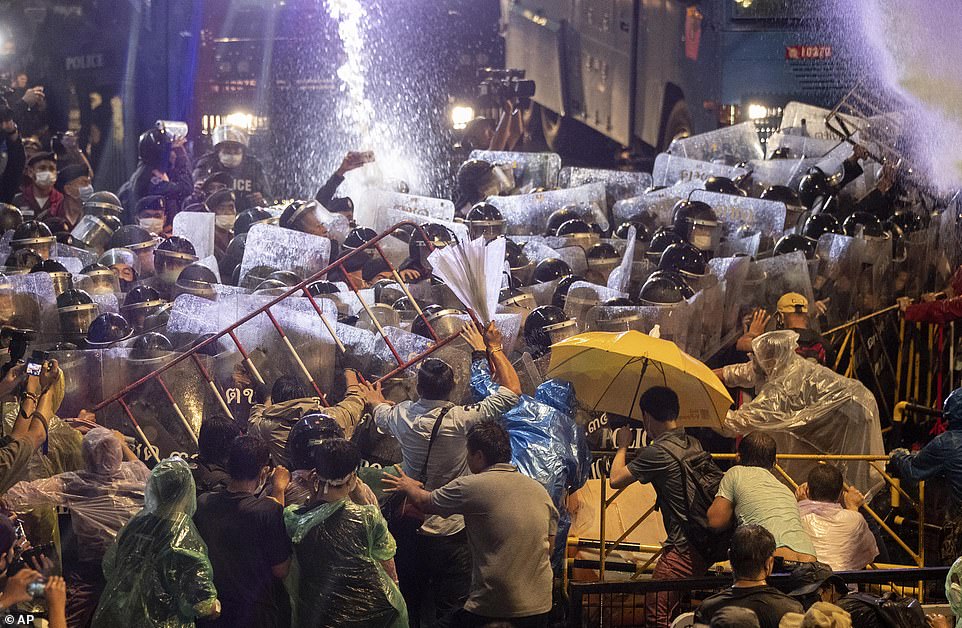 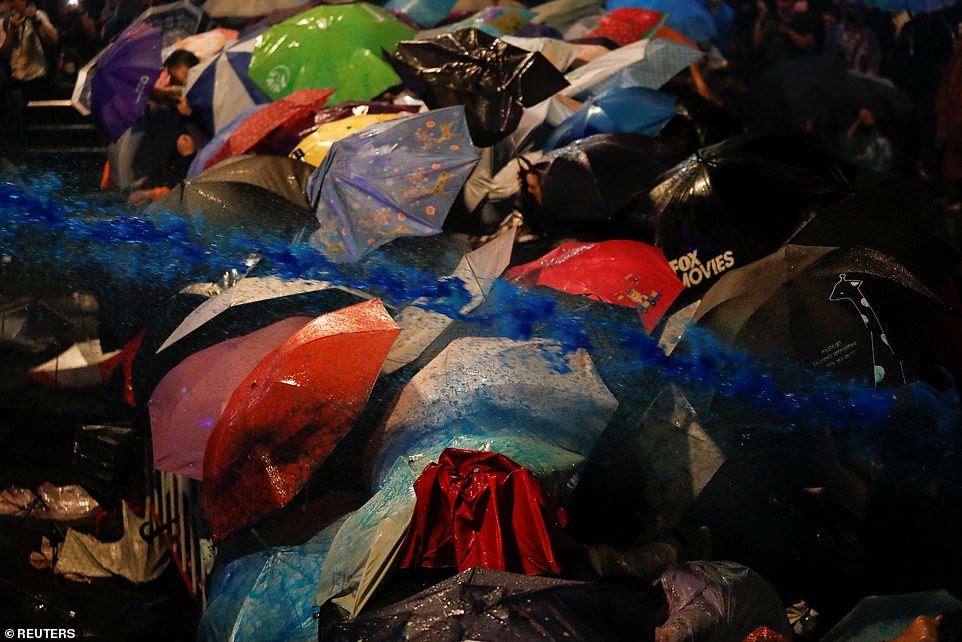 Onlookers have claimed the ‘chemical-laced’ water cannons fired at protesters contained an irritant. Other photos show protesters washing their eyes after being hit 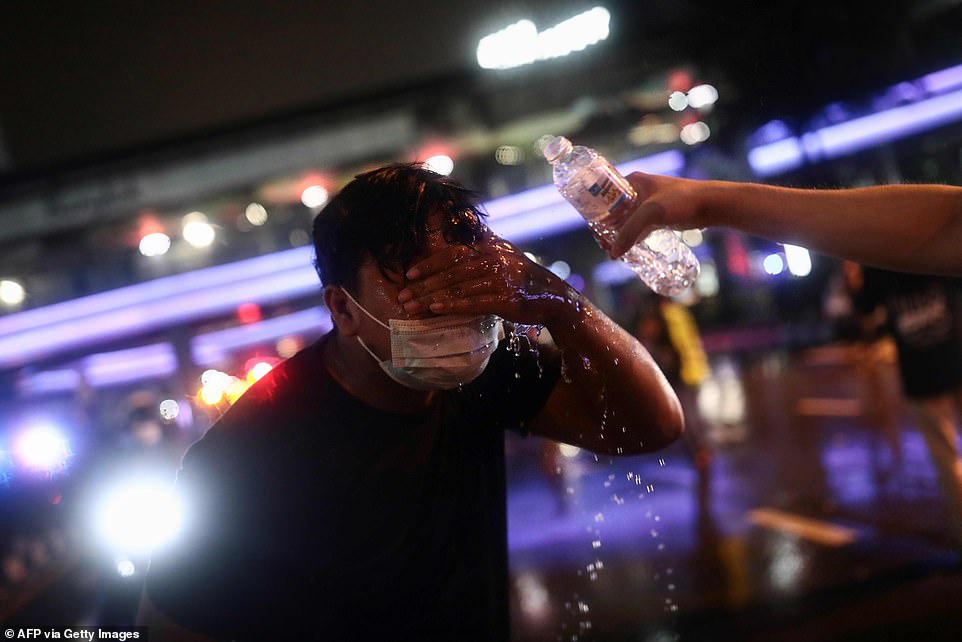 Ekachai Hongkangwan and Bunkueanun Paothong received the unusual charge for being part of a protest that crowded royal motorcade carrying Queen Suthida on Wednesday during a large demonstration near the capital’s Government House.

Paothong said during a Friday morning Facebook broadcast that he was surrendering himself to police.

‘I am accused of trying to harm the queen,’ he said. ‘I am innocent. That was not my intention.’

Ekachai told AFP news agency by phone he had also been charged and police later confirmed he was in their custody.

Ekachai is a veteran activist who has been physically attacked several times, in apparent response to his criticism of the military.

Paothong, a university student also known as Francis Bunkueanum, has been involved in organising the recent protests. 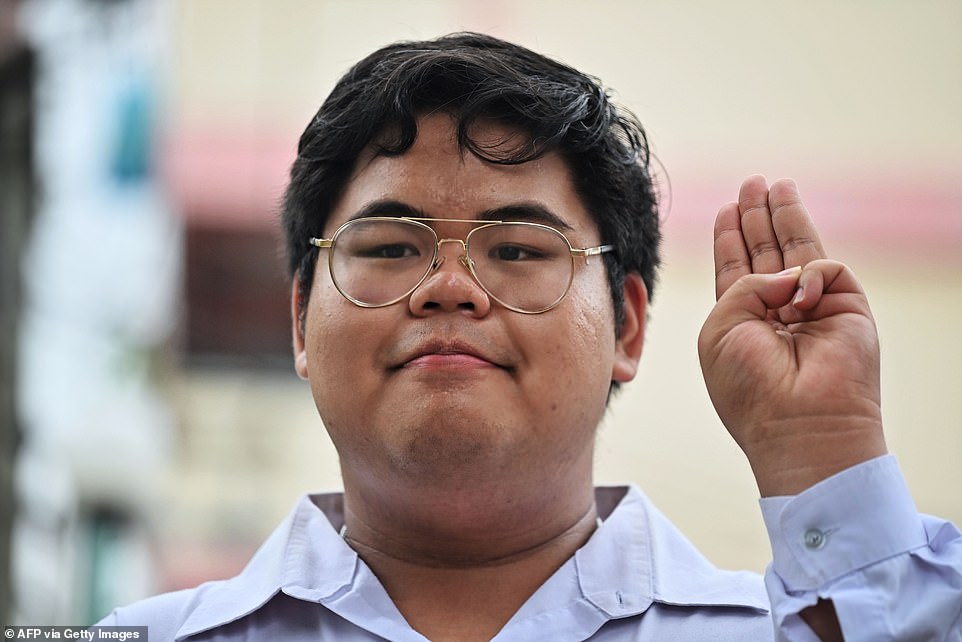 Pro-democracy activists Bunkueanun ‘Francis’ Paothong holds up the three-finger salute Thai protesters have adopted from The Hunger Games films before entering the Dusit Police Station on Friday. Paothong will answer charges of harming the queen over a protest near her motorcade on Wednesday 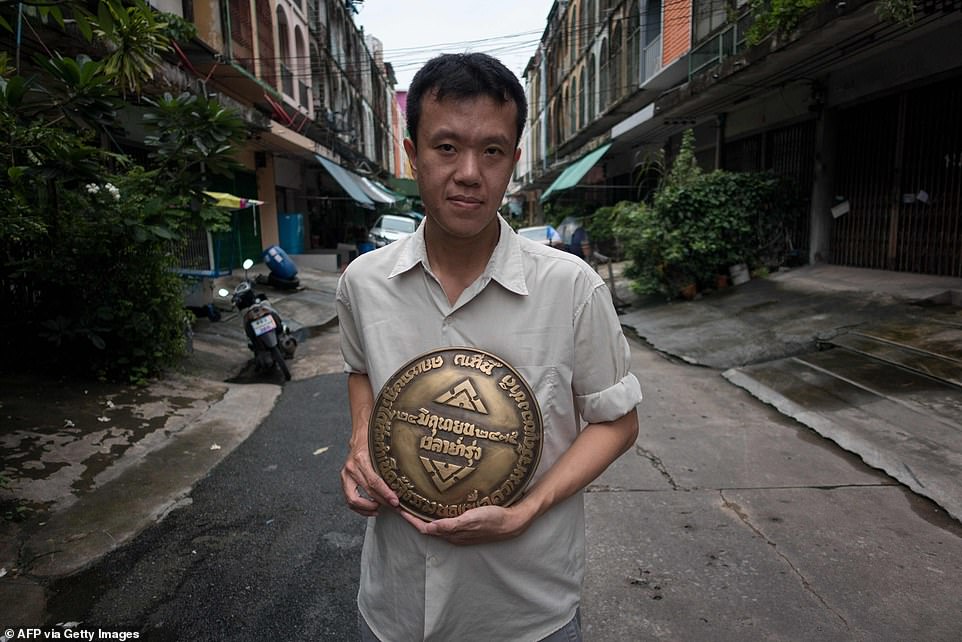 Dissident Ekachai Hongkangwan holds a replica of a plaque commemorating the year Thailand went from being an absolute monarchy to a democracy in 1932.  Ekachai is a veteran activist who has been physically attacked several times, in apparent response to his criticism of the military 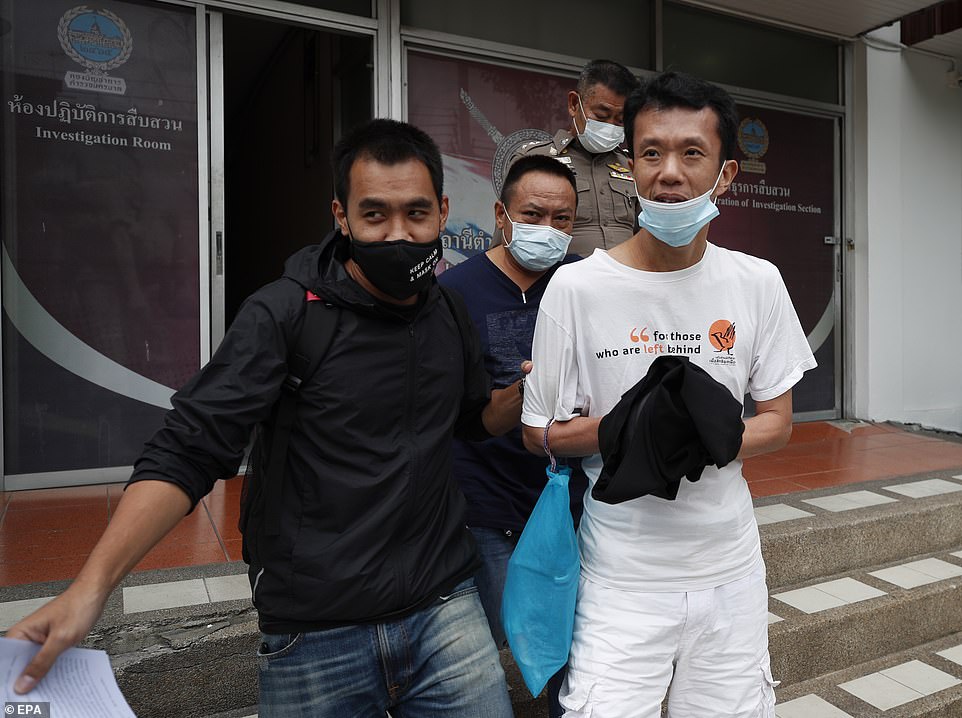 Both men could face anywhere from 16 years to life in prison under a law that has not been used for decades and punishes any ‘act of violence against the queen or her liberty’.

It is not clear why the pair were singled out.

The Wednesday incident in which the two were allegedly involved was stunning to most Thais, because by tradition and law, members of the royal family are treated with the utmost respect.

Security personnel stood between the vehicles and the crowd, but there was no visible violence and none was described by witnesses. 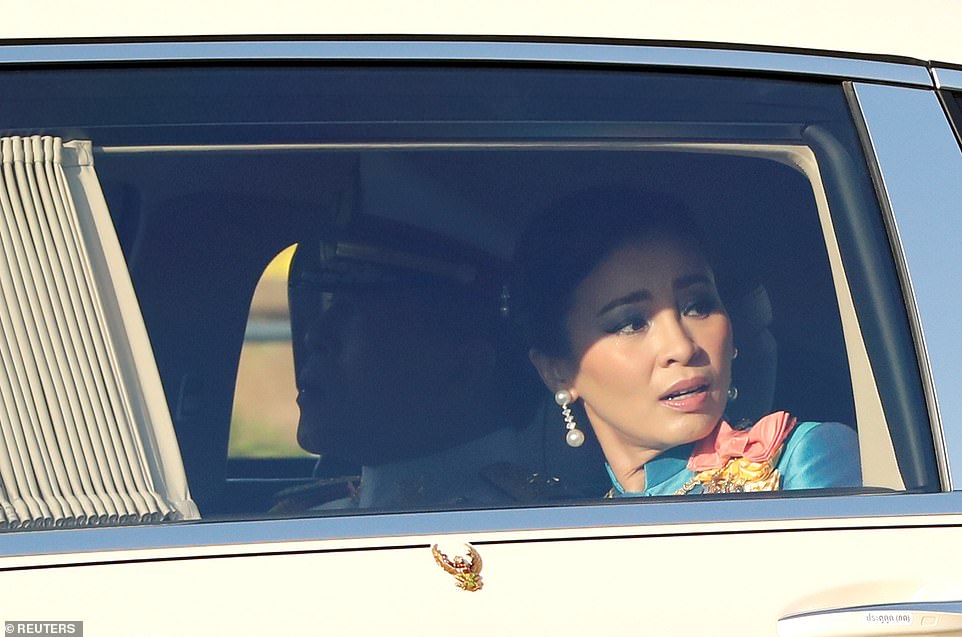 A motorcade containing Queen Suthida (above) and other members of the Thai royal family passed through a road where anti-government protesters had gathered outside the Government House on Wednesday. Two men are now facing life in prison in connection with the event for allegedly harming the queen 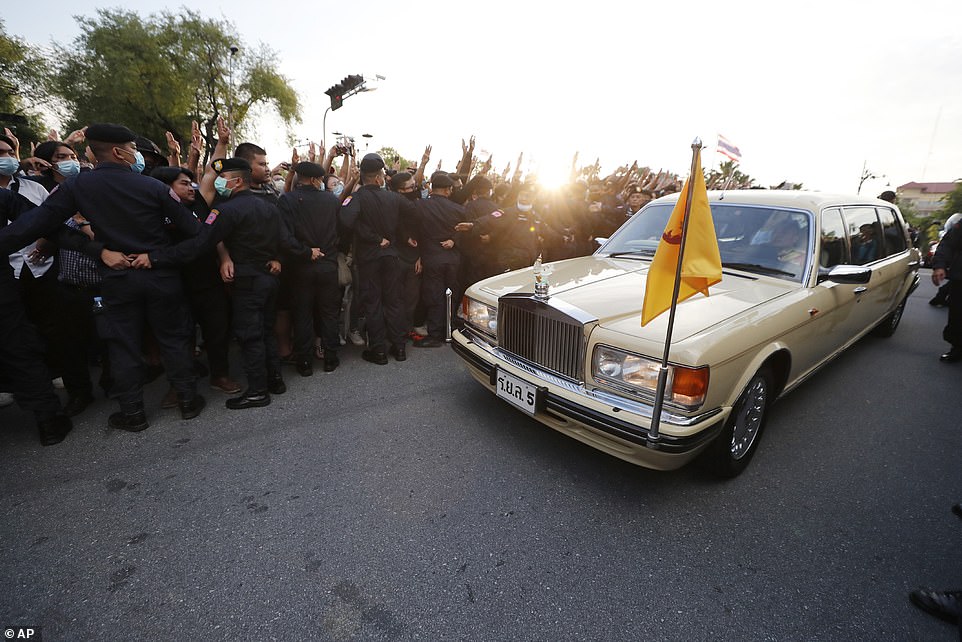 Security personnel stood between the vehicles and the crowd, but there was no visible violence and none was described by witnesses

The incident took place during the third major rally in Bangkok called by the protesters.

They began at the city’s Democracy Monument, after which several thousand marched to Government House, where the offices of Prime Minster Prayut are located.

At the same time, King Maha Vajiralongkorn and other members of the royal family were driving to attend a royal religious ceremony at the Grand Palace.

Queen Suthida’s motorcade encountered a small crowd that had gathered at Government House ahead of the main body of protesters.

‘We were not notified by the police of the upcoming royal motorcade in which we had no way of knowing because they were not informing us,’ Paothong told reporters on Friday.

‘Once we knew that there was a motorcade of the queen and the heir presumptive to the throne I tried to break away from the line and use my megaphone to have everyone move away from the police barriers so the motorcade can pass through easily,’ he said.

Friday’s announcement of the charges against the Ekachai and Paothong is the first time such serious charges have been levelled against pro-democracy activists, many of whom have already been hit with lesser charges, including sedition and breaking coronavirus rules on gatherings.

Their movement’s demands include the abolition of a strict royal defamation law – which shields the monarchy from criticism – and for the royal family to stay out of politics.

They are also calling for new elections and changes to the constitution to make it more democratic. 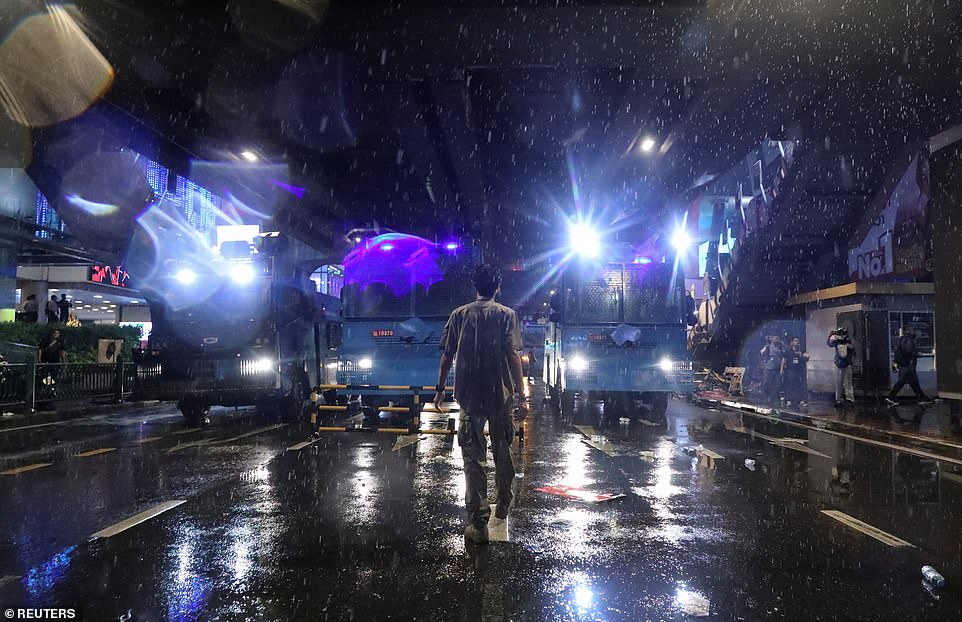 A man faces off against riot police vans during a protest in the popular Ratchaprasong shopping district in the Thai capital, Bangkok 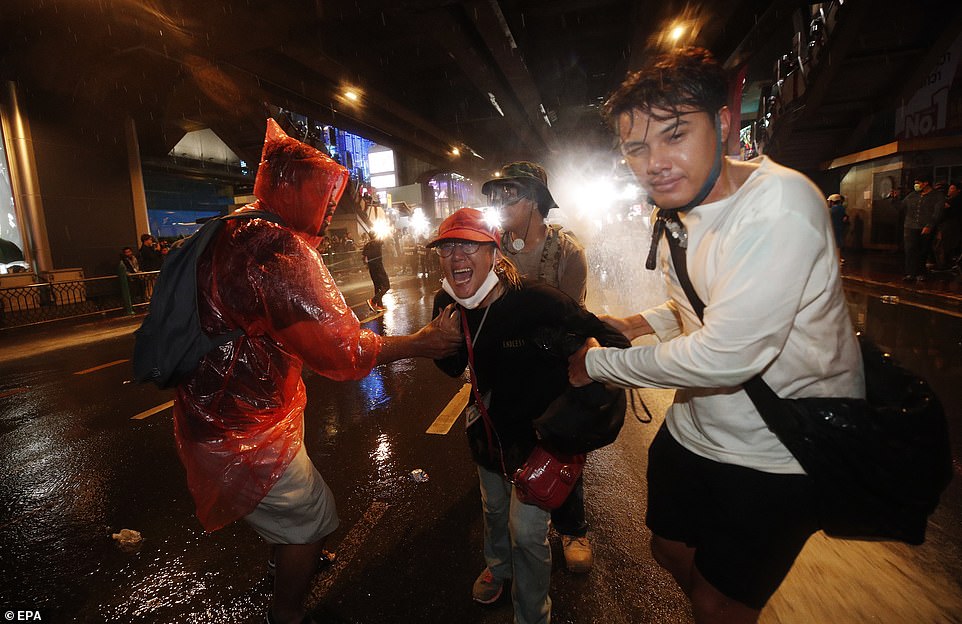 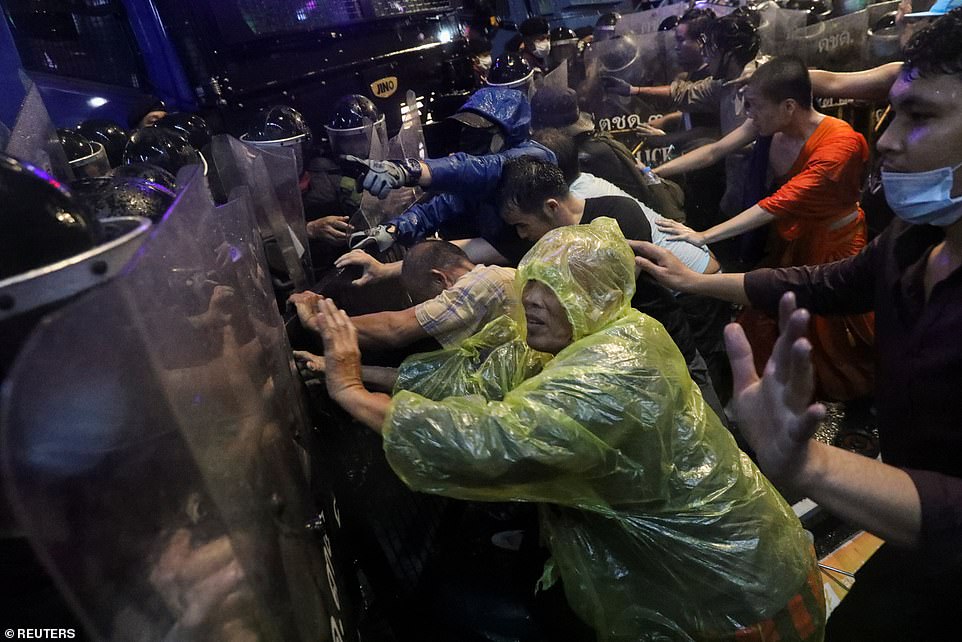 Protesters resisted police efforts to break up their demonstration, pushing back against riot shields, which police used to push back the crowd 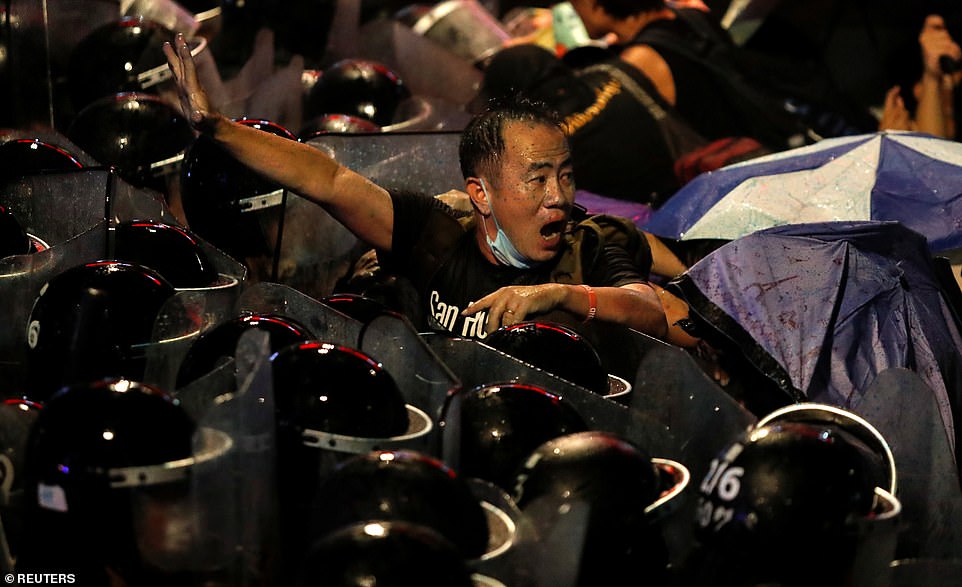 Among the other activists arrested Thursday was Panusaya ‘Rung’ Sithijirawattanakul, whose detention was live-streamed on Facebook.

Anon Numpa, another leading activist, said he was forcibly taken by helicopter to Chiang Mai in northern Thailand.

His lawyer Krisadang Nutcharut told AFP that Anon had been refused bail and was being held in Chiang Mai prison.

‘Keep on fighting! My freedom is a very small issue compared to the entire struggle for democracy,’ Anon posted on Facebook late Thursday.

The legal aid group Thai Lawyers for Human Rights said at least 51 people have been arrested since Tuesday in connection with the protests. 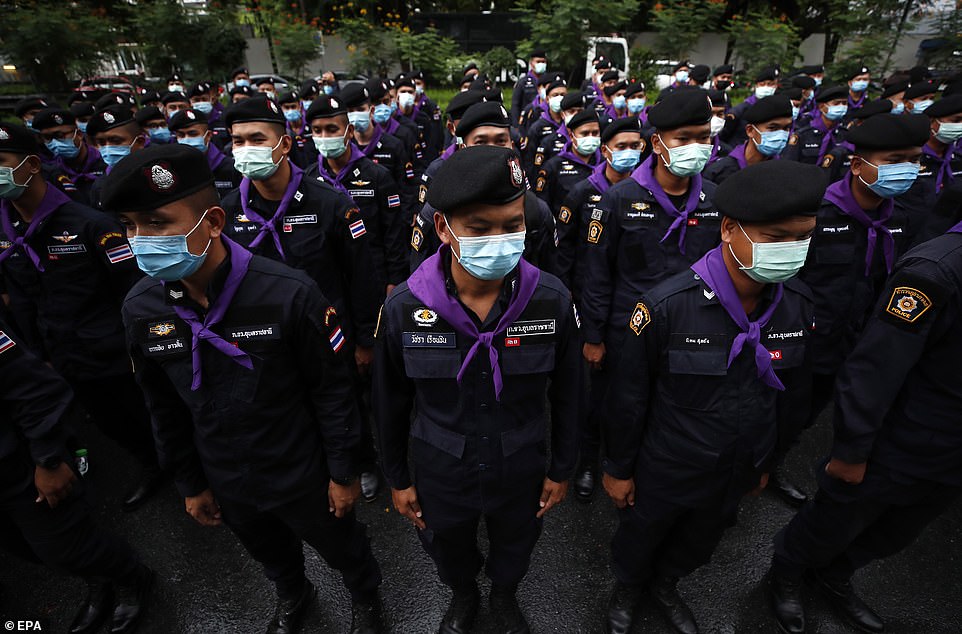 Thai police are pictured standing guard near a pro-democracy protest on Friday. The police, along with the military, have been the target of criticism levelled by demonstrators 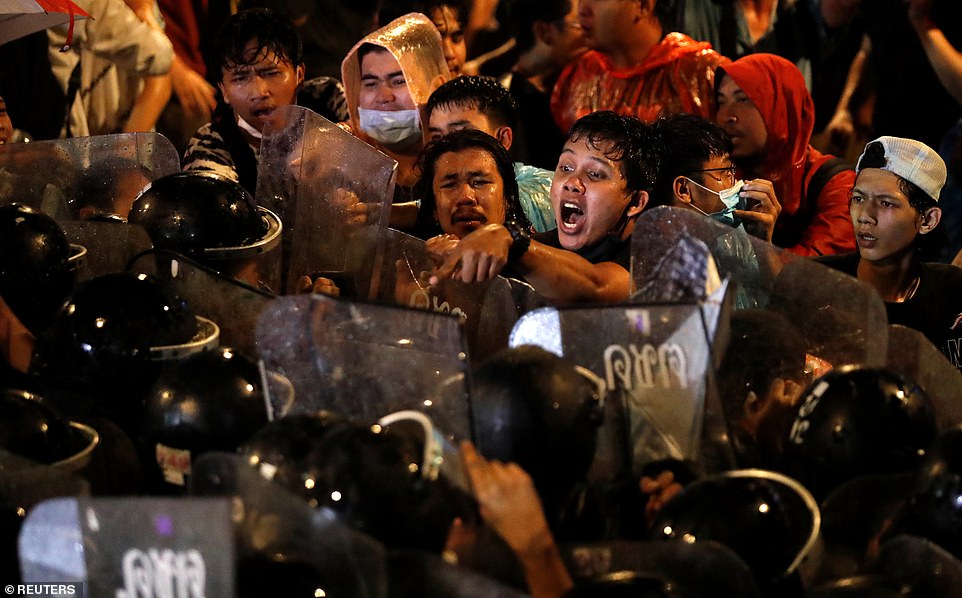 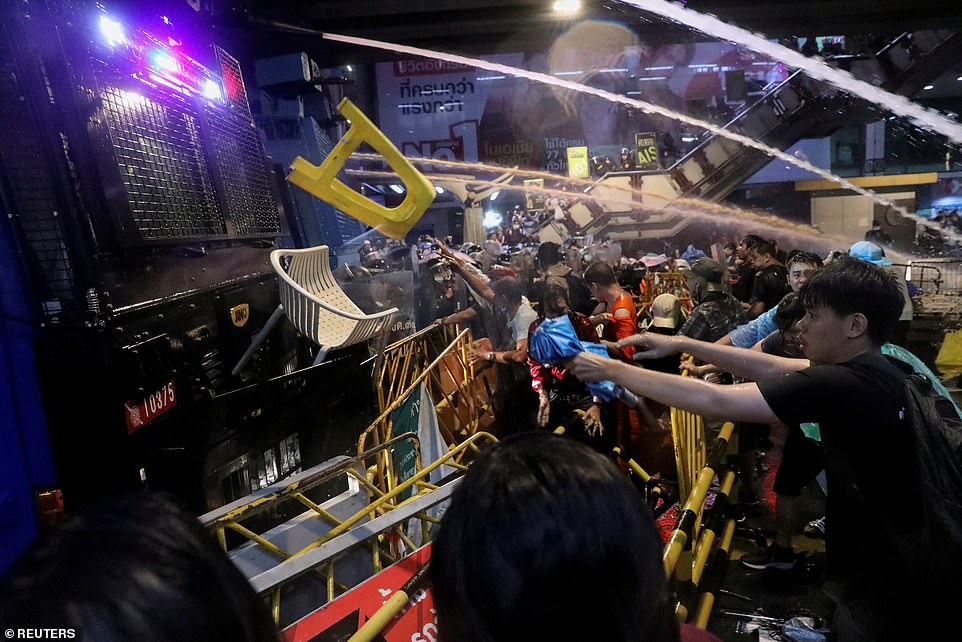 Hundreds of activists blocked the road behind a makeshift barrier, calling for the riot police to ‘get out!’ and singing the Thai national anthem. Some threw objects at a riot police fan that was spraying the crowd with water cannon

Prior to the mass protests on Friday, petition site Change.org was banned in the kingdom, the BBC reported, after hosting a petition to have King Maha Vajiralongkorn declared persona non grata in Germany – where he spends most of his time.

The Ministry of Digital Economy and Society said the contents of the petition – which had gained nearly 130,000 signatures before the site was blocked – violated Thailand’s Computer Crime Act.

Police had closed down roads in central Bangkok in an attempt to stop protesters gathering once more, with premier Prayut also issuing a warning.

‘I warn everyone not to violate the law,’ he said after holding a special cabinet meeting.

Prayut added on Friday that his government hopes it could drop the state of emergency ahead of its normal 30-day duration ‘if the situation improves quickly.’

Amid the chaos, the king and queen put on a brave face while attending a graduation ceremony on Thursday, where Queen Suthida received an honorary degree. 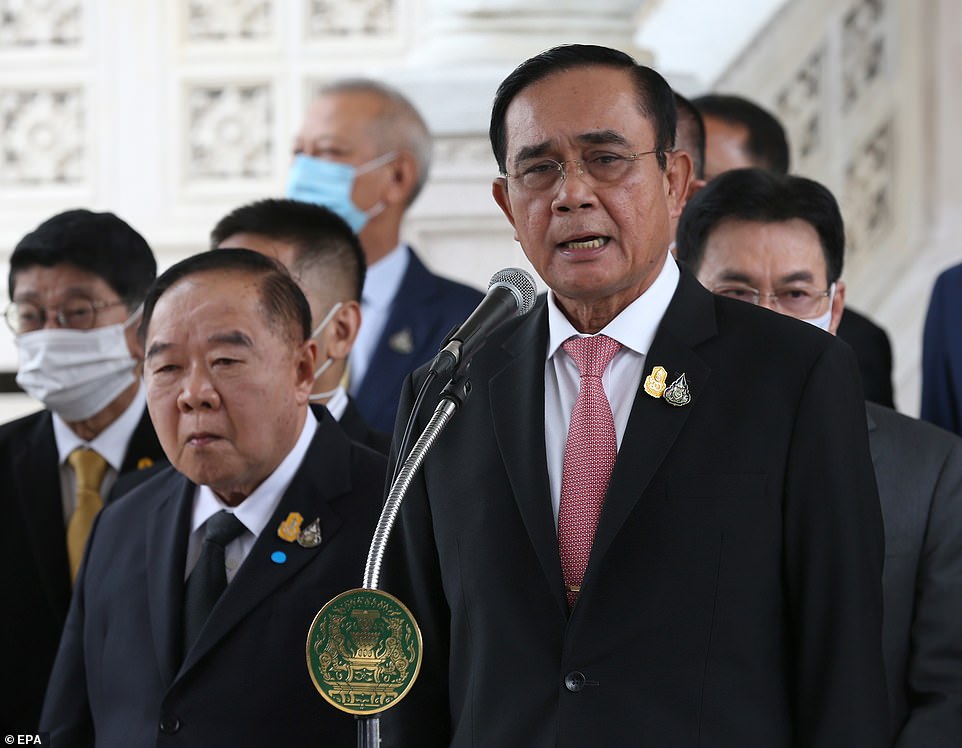 ‘I won’t quit. What have I done wrong?’: Prime Minster Prayut Chan-ocha remained defiant in the face of the protests, while addressing the public on Friday 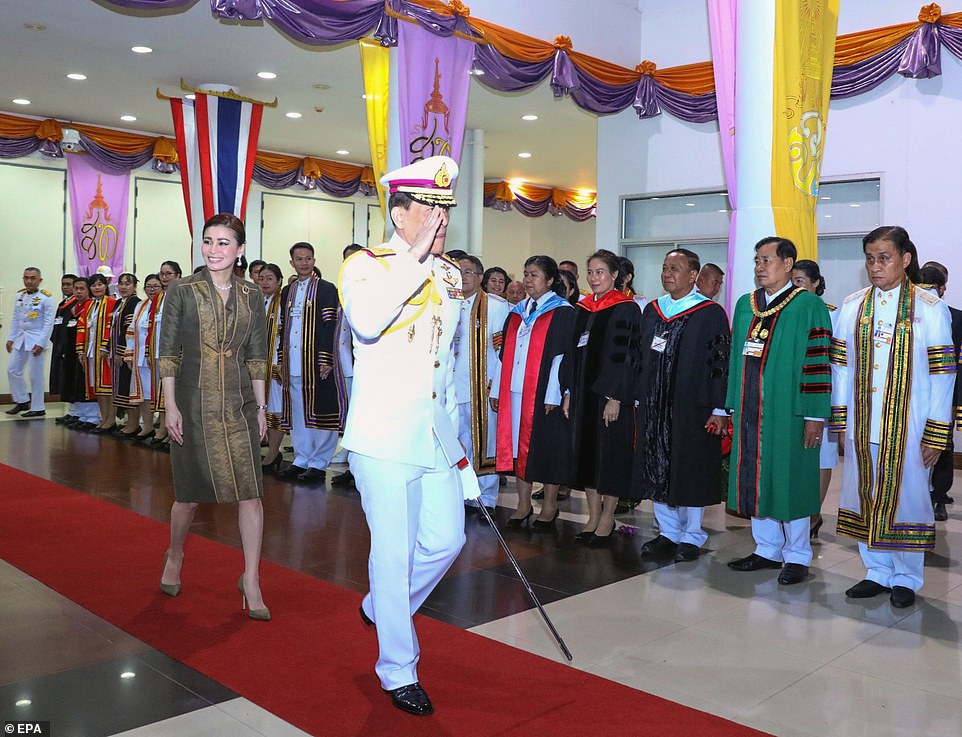 At the ceremony, Queen Suthida was presented with an honorary degree just one day after protestors heckled her motorcade in an incident that was stunning to most Thai’s because the country’s tradition and law demands respect for royalty 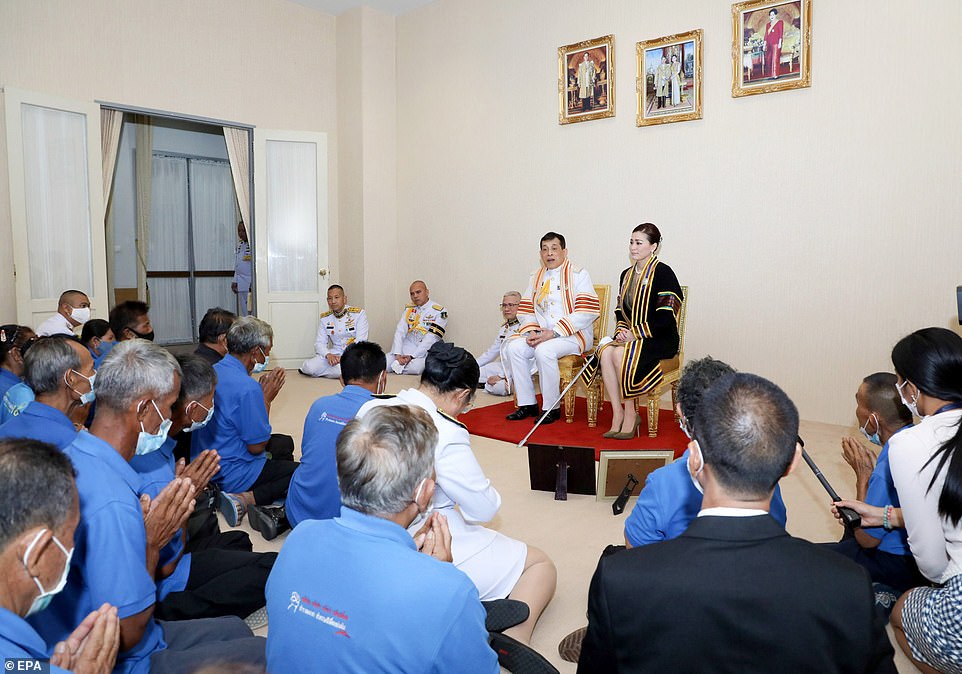 The royal couple spoke to villagers during their visit to the graduation ceremony, according to Thailand’s Royal Household Bureau 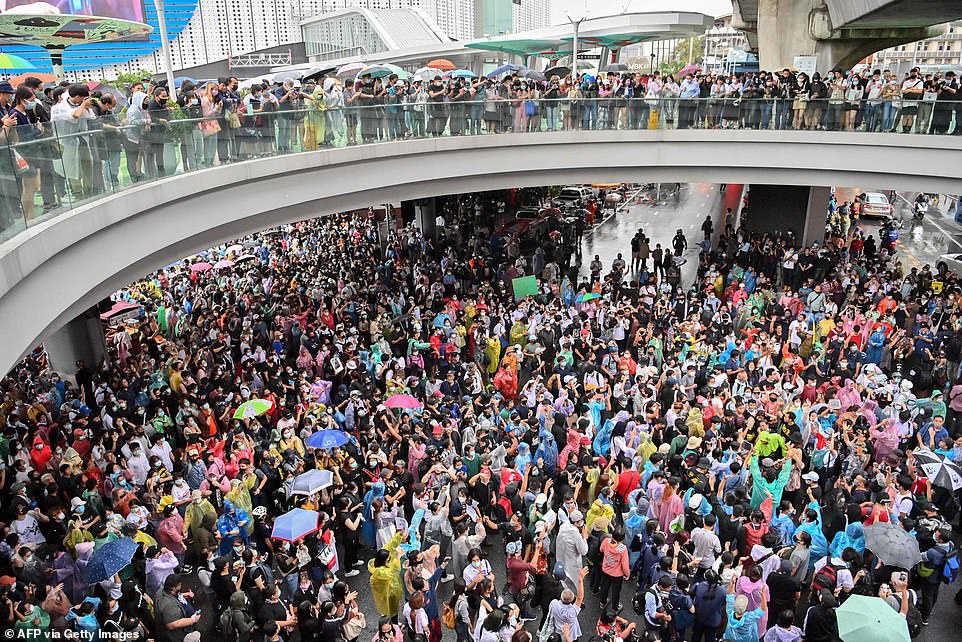 Some 2,000 people were thought to have gathered to protest – which began peacefully -in Bangkok on Friday in defiance of a government ban on meetings of more than four people and despite the dangers posed by the coronavirus pandemic

Friday’s clash was an escalation from the night before, when some 10,000 people had rallied late into the night at the flashpoint junction of Ratchaprasong.

Confronting police, they demanded the release of around two dozen arrested activists, chanting ‘Free our friends!’ and ‘Prayut get out!’.

Prayut said he had no intention of stepping down.

Thailand’s modern political history is dotted with periods of violent civil unrest and more than a dozen military coups, the most recent of which brought Prayut to power in 2014.

Bangkok-based analyst Thitinan Pongsudhirak said the protest movement could heighten the chances of Thailand facing yet another military takeover.

‘This endgame for Thailand’s future has been building up for years, and it is finally here and now,’ he said.

‘A brutal dispersal of the protest may take place,’ they told AFP. 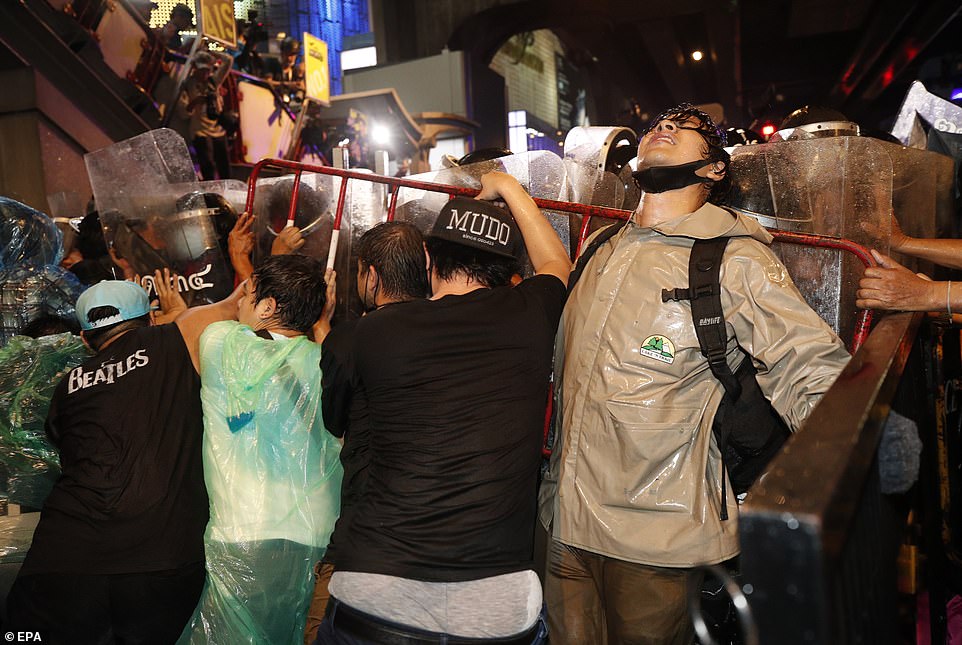 Protesters clash with riot police at the rally on Friday night, using a cordon and riot shields to try to push each other back. Thais have been protesting for months, among their demands are the abolition of a strict royal defamation law – which shields the monarchy from criticism – and for the royal family to stay out of politics 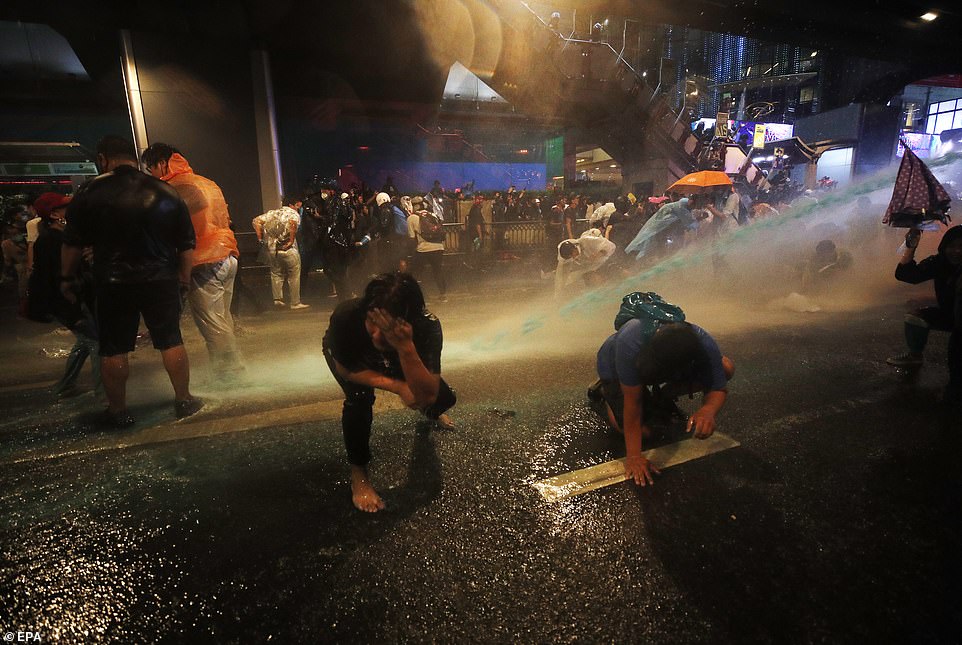 The legal aid group Thai Lawyers for Human Rights said at least 51 people have been arrested since Tuesday in connection with the protests. Pictured: Protesters attempt to shield themselves from police water cannon on Friday night