The mother of missing student Libby Squire was seen hugging a police officer after a church service in their hometown to mark the tenth day since she disappeared.

Lisa Squire was accompanied by her father Russ at the vigil at Hull Community Church today.

They also used a cameras to search the gutter outside the home of the Polish butcher they are quizzing after she vanished.

Investigating officers were given an extra 24 hours to question Pawel Relowicz, 24. 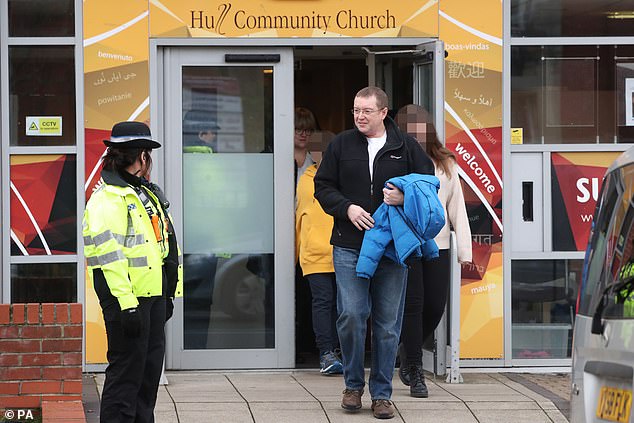 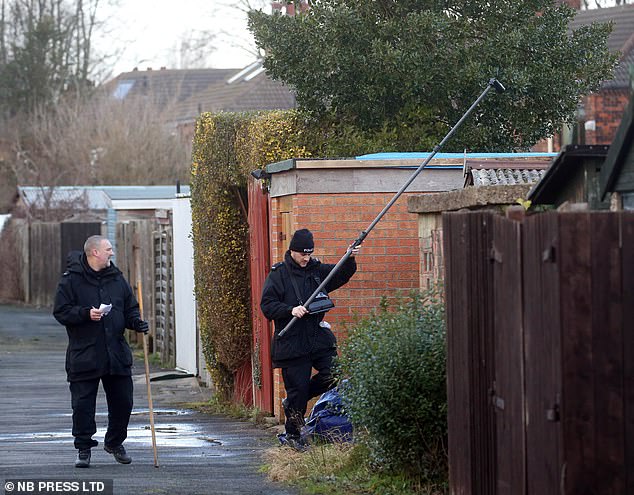 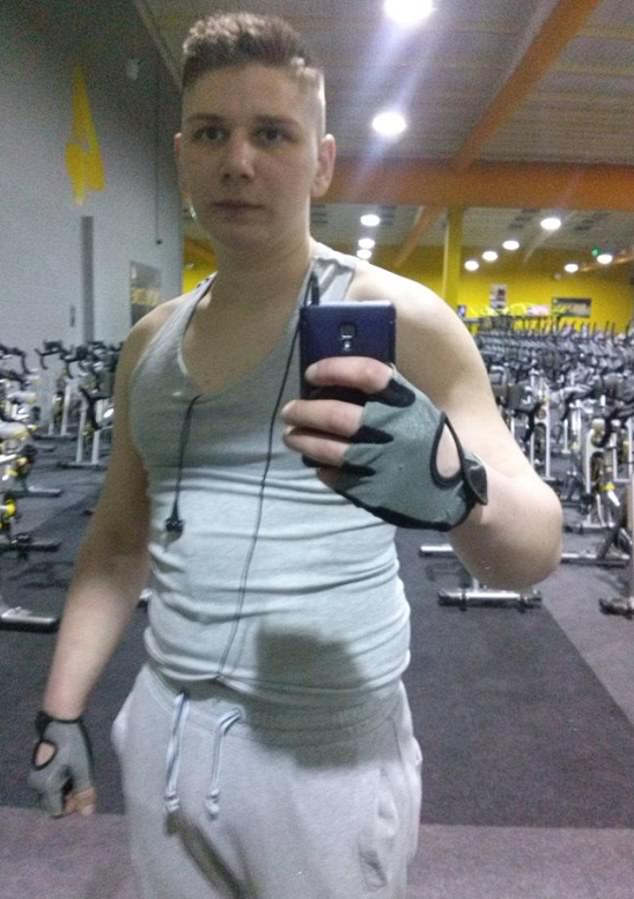 Police have held Pawel Relowicz (left) over the disappearance of Libby Squire, 21, and have been granted an extension of 24 hours 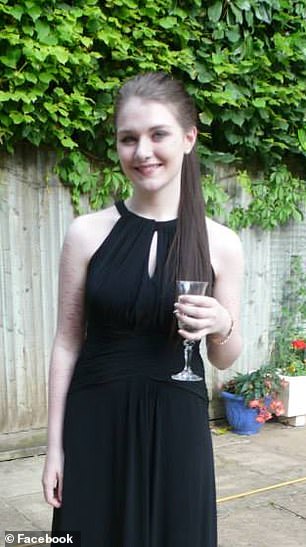 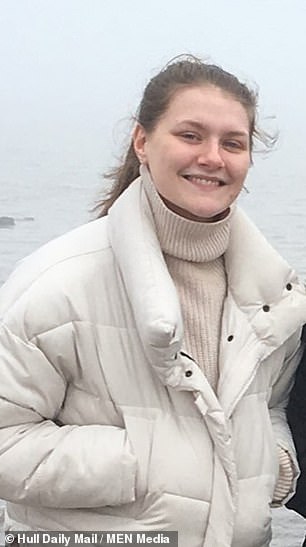 High-tech cameras were used to search outbuildings in Hull near the home of the philosophy student who went missing after a night out on January 31.

The infra-red cameras are capable of detecting people who are obscured by cover and are equipped with a microphone to hear hidden subjects.

And neighbours were quizzed by detectives who handed them a form with seven questions to complete.

A source told the Sun: ‘It asked where they were the night Libby went missing, if they know her, had they seen any suspicious activity in the street before the arrest and had they ever noticed the car before.’

The questionnaire also asked residents if they knew anyone who lived in the house where Polish butcher Relowicz, a married father-of-two, lives.

Police officers also continued to search a property on Raglan Street, Hull, where the 24-year-old man was arrested on Wednesday night.

A large police van could be seen at the bottom of the road, with several officers walking in and out of the property carrying items. 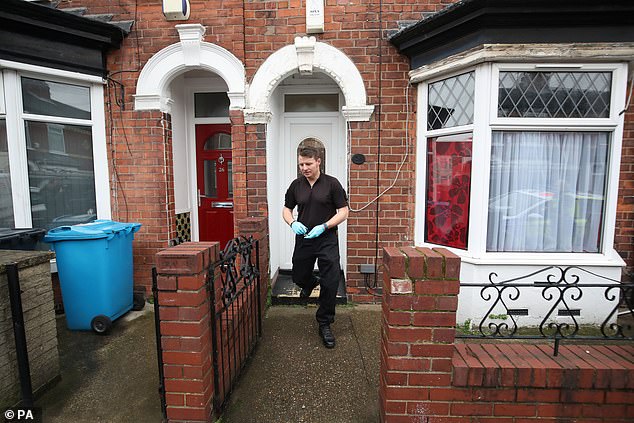 Police officers also continued to search a property on Raglan Street, Hull, where the 24-year-old man was arrested on Wednesday night 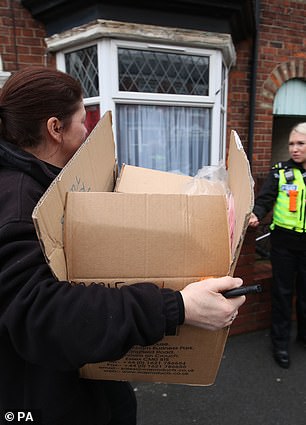 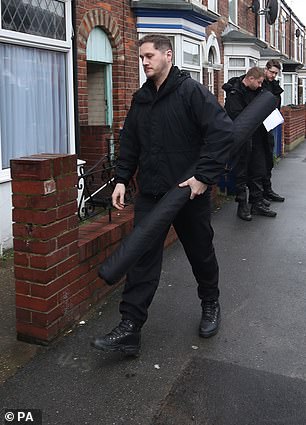 A large police van could be seen at the bottom of the road, with several officers walking in and out of the property carrying items 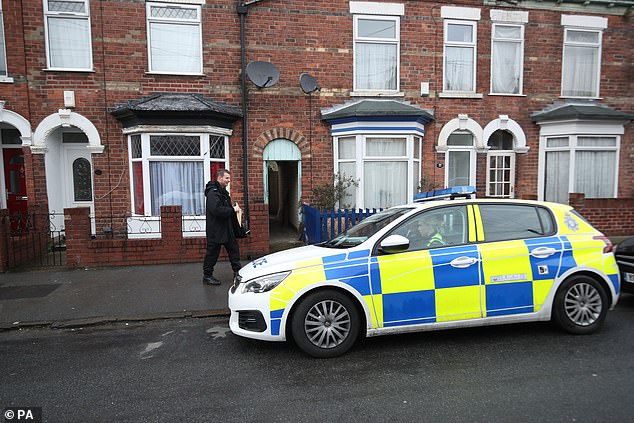 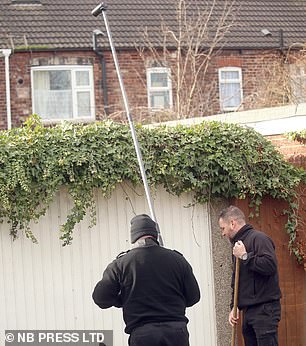 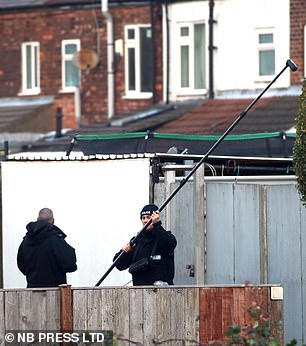 11pm Thursday, January 31: Libby is refused entry at Welly Club around two miles from her home and put into a taxi

11.30pm: Libby was dropped off on Wellesley Avenue – but does not go inside her house

11.45pm: Libby was seen sitting on a bench around the corner on Beverley Road. A witness says she was seen speaking to the driver of a car.

12.09am: Detectives believe Libby stayed in the area for about half an hour and was wandering the streets near her student digs.

12.30am, Friday February 1: A near-neighbour says she woke up after hearing ‘blood-curdling’ screams.

February 6: A 24-year-old man is arrested on suspicion of abduction and is ‘helping police with their enquiries’

A source said: ‘The police won’t give up hope until all hope has gone. They owe that to Libby.’

Libby was heading for the Welly Club near her home on a night out on Wellesley Avenue the night she disappeared.

Police said that they are still treating the case as a missing person’s enquiry.

A statement released by Humberside Police confirmed that the extension allowed officers until 9pm on Sunday to question the 24-year-old butcher.

Detective Superintendent Mathew Hutchinson said: ‘I can confirm that the court has granted us a further 24 hours to question the man.

‘We are still treating Libby’s disappearance as a missing person’s enquiry. I have said previously that we are keeping an open mind as to her whereabouts and that is still very much the case.

‘Our number one priority is to find Libby Squire and we are still conducting extensive searches and appealing for any information from the public.’

Two police cars were parked on Raglan Street on Saturday morning as students living in the area described the case as ‘surreal and scary’. 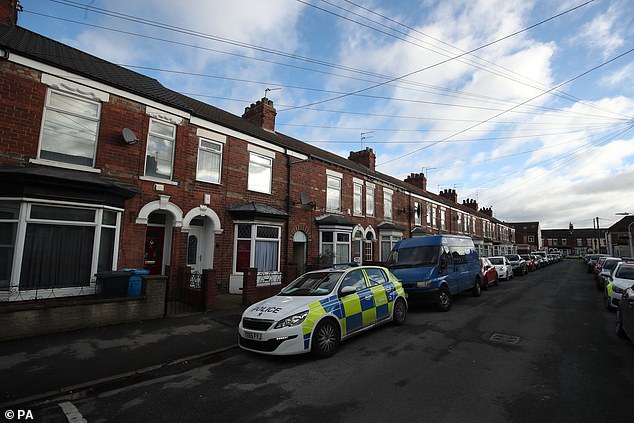 A police car outside a property in Raglan Street in Hull. Pawel Relowicz’s home is on this street 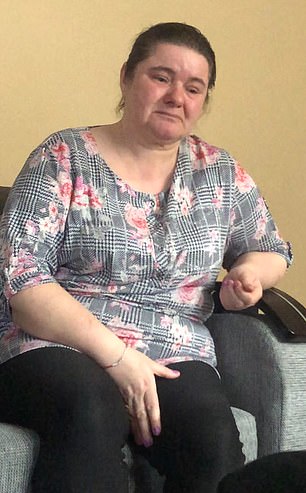 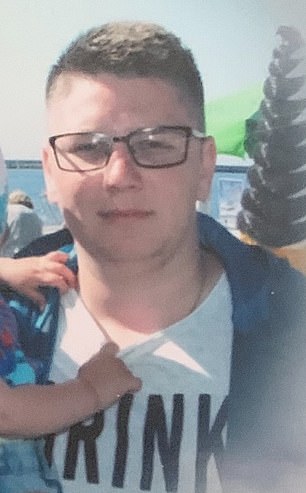 Marzena Relowicz (left), mother of arrested man Pawel Relowicz (right in a family photo), sobbed as she spoke to MailOnline at her home in Warszewice, Poland and said: ‘My son is no killer’

Police could be seen using sticks and cameras to search the back gardens of houses backing on to Oak Road Playing Fields which has been the focus of searches over the last week.

The news comes as a JustGiving page was launched to alleviate the financial costs of Libby’s parents staying in Hull as the search continues for her daughter.

Lisa and Russ Squire are from High Wycombe and Craig Hopkins, a mature student at Hull University where Libby is enrolled, started the crowdfunding campaign to alleviate unneeded financial stress. 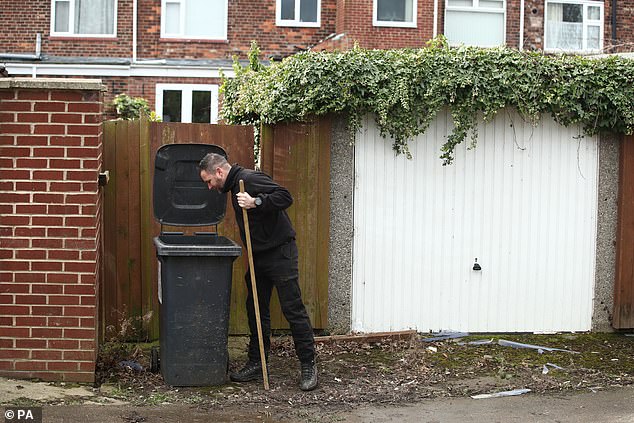 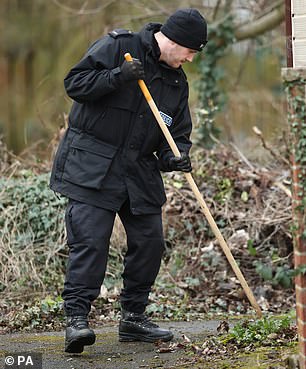 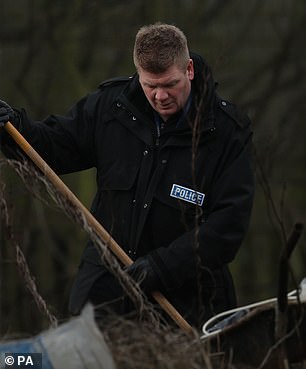 He told Hull Live: ‘They must be going through such a terrible ordeal and this is such a challenging time, so it would be great if we could ease at least one pressure on the family.

‘Staying in Hull will have financial implications for them, with hotels and food, so it would be great if we could come together as a community and help them.’

The 44-year-old added: ‘I am a mature student at the University of Hull, and although I don’t know Libby, it’s like we’re all searching for a member of the university family.’ 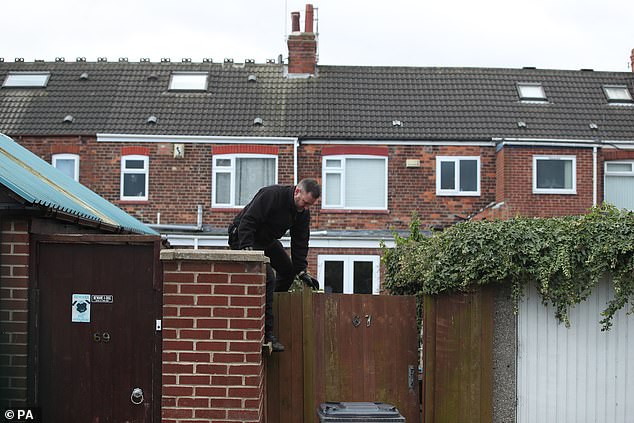 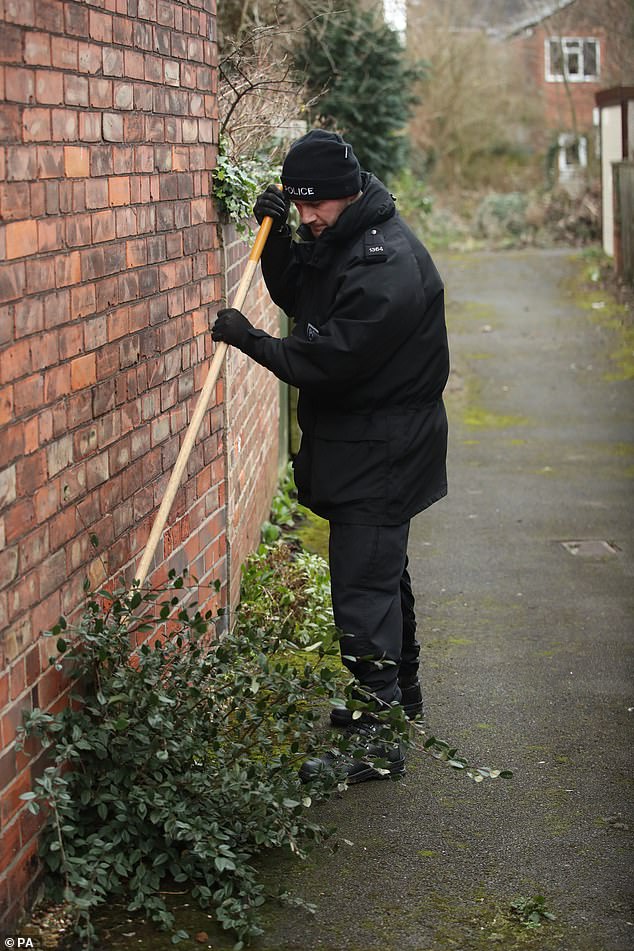 Yesterday, a CCTV clip was released and is believed to be the last sighting of Libby, showing her climbing into the passenger side of a car and being driven away by a man.

Police have been examining the CCTV footage, taken on Haworth Street, Hull just after midnight last Friday, which shows the male driver rolling a cigarette before helping a passenger, thought to be Libby, get into the car. 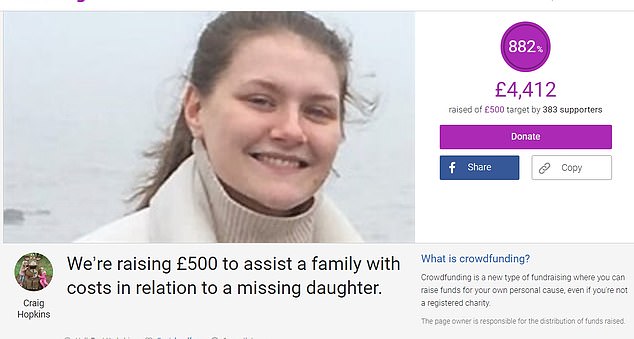 The JustGiving page, started by a fellow Hull University student, has so far raised more than £4,000

The man then walks around to the driver’s side, gets in and pulls away just minutes before Libby was previously last seen.

A cyclist and another vehicle are seen minutes before the driver leaves, and may provide crucial witness testimony.

The grainy video, shared by ITV News, is now being examined by police. The time on the CCTV footage is believed to be a minute slow.

A second video, taken minutes later and revealed by The Sun, shows a similar car being driven half a mile away.

Humberside Police’s Detective Superintendent Matt Hutchinson told ITV News: ‘There have been 100s of hours of CCTV footage viewed as part of our investigation into the disappearance of Libby Squire.

‘There are various lines of enquiry we have investigated and are following up in connection to CCTV footage.’

In Hull, officers stopped the public entering a large area of Oak Road playing fields surrounding a pond with a helicopter hovering above as they searched drains and bins. It is half a mile from Libby’s home.

One woman said she heard ‘dark and eerie’ screams from near the park on the night she disappeared and saw a man running away, according to The Mirror. 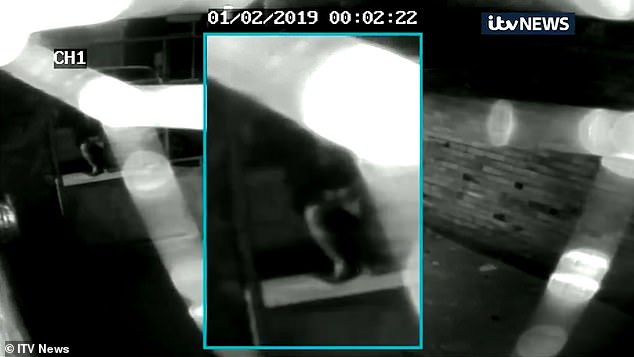 Teams were also scouring a stretch of riverbank and a series of abandoned buildings – but officers turned walkers away and refused to say why they were back in an area they have already checked in the seven days since she vanished.

A forensics officer was also seen bagging up evidence and photographing an area of pathway leading into the cordoned-off zone.

As part of their ongoing investigation, police arrested Paweł Rełowicz although he is not thought to be the man in the CCTV footage.

Rełowicz remains in custody after officers hunting for Miss Squires were given 36 more hours to question him over her disappearance.

Detectives have sealed off his rented house, took away his computers and towed away his silver Vauxhall Astra after they arrested him on Wednesday night on suspicion of abducting her a week ago in Hull. 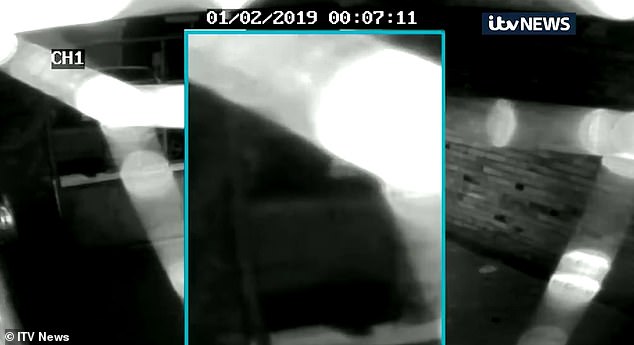 The footage shows the car driving away at 12.07am, just  minutes from when the university student was last seen

His terraced home is half a mile from the bench where Miss Squire was last seen sitting in a drunken state shortly before midnight last Thursday.

MailOnline visited Rełowicz’ mother Marzena in Poland today who said she understood her son was driving through the area where the philosophy student was last seen and had offered a lift to a girl he saw sobbing on the street.

She said: ‘My son is no killer. Paulina [Pawel’s sister] told me that he was driving home and saw a girl crying. Paulina told me he had given her a lift as she wanted to go home.

‘I know in my heart that Pawel did not do anything to this girl. My heart is breaking over this and I feel so sad for the girl’s parents and what they are going through. I can’t imagine their pain. If I could go to England I would and would kneel before them and pray that she is found.’

The University of Hull said the student wellbeing team was available for anyone who needs support at the weekend.