Policeman moonlighted as a dog walker while cheating the Met out of £100,000 in sick pay court hears

A policeman moonlighted as a professional dog-walker while defrauding the Met of over £100,000 in full sick-pay, claiming he could barely move, a court heard on Monday.

Police Constable Richard Williams, 40, told a senior officer he would probably need a wheelchair or at least two walking sticks after two car crashes while on duty.

He served the Metropolitan Police on the Estates Police Team, based in Dagenham, but after the second collision was hospitalised with back, pelvis, groin and side injuries.

Police Constable Richard Williams, 40, is accused of moonlighting as a professional dog-walker while defrauding the Met of over £100,000 in full sick-pay, claiming he could barely move, a court heard on Monday

Williams from Bierton, Aylesbury grimaced and struggled to rise to his feet with the aid of a walking stick when told to stand for the jury.

He has pleaded not guilty to eight counts of defrauding the Met by providing fraudulent and altered medical certificates between April 24, 2015 and November 27, 2017.

He also denies an additional fraud of dishonestly representing to a doctor he received police sick notes for the debilitating condition fibromyalgia and possessing articles for use in fraud, namely a quantity of medical certificates.

Prosecutor Mr. Daniel Higgins told the court: ‘Mr. Williams had been working as a professional dog walker, a profession you may feel one needs to be physically active for.

‘There were some positive reviews from the customers of ‘DreamyDog Complete Care’ and of ‘DreamyDogWalking’ with one customer saying: ‘I’d highly recommend Richard to everyone’.

‘There are other glowing recommendations for Mr. Williams,’ said the prosecutor, adding the defendant was paid nearly £11,500 by dog owners while on £100,000 sick pay, plus pension contributions.

‘What the Crown say is this is a case of fraudulent activity by Mr. Williams, who while a service police constable, presented fraudulent or altered medical certificates to the Metropolitan police.

‘This was in order to obtain extended sick leave on full pay and ultimately be pensioned off.’

Williams was involved in a traffic collision in early 2014, suffering back and knee injuries and again on March 26, 2015 when another vehicle reversed into the drivers’ side of a police car he was a passenger in. 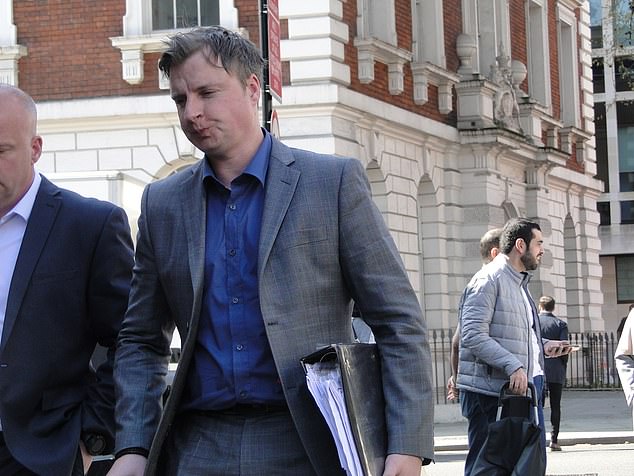 Williams at Southwark Crown Court. He has pleaded not guilty to eight counts of defrauding the Met by providing fraudulent and altered medical certificates between April 24, 2015 and November 27, 2017. He denies the charges against him

‘This was a low impact collision, but Mr. Williams was taken to Queen’s Hospital, Romford and on discharge he seemed to be in pain and not able to walk properly and it seemed the accident aggravated his old injury,’ explained Mr. Higgins.

‘Mr. Williams altered the second certificate, adding the words: ‘injury not fit for work’. He has written on this medical certificate for his employer to allow him to remain on sick leave.

‘The Crown say the alteration of the medical certificate forwarded to his employer for sick leave is clearly a dishonest act,’ added Mr. Higgins.

Williams was prescribed morphine and pain killers during the period and complained of constant pain to his back, knees, legs, arms and shoulders, headaches, stiffness, poor sleep, burning sensations, stabbing pain, dizziness and clumsiness and numbness and pins and needles in his hands and fingers.

He told one GP he was suffering musculoskeletal pain from fibromyalgia, but the prosecution say Williams simply lifted the symptoms from the NHS’s website.

Williams did not even sometimes visit the GP’s on days he claimed the medical certificates were issued. ‘He knew he could manufacture his own fraudulent one,’ said Mr. Higgins.

He ruled out returning to work on restricted duties, claiming he could not sit or stand for longer than five minutes, struggled to get up in the morning and could not travel in on public transport, the court heard.

‘He informed his sergeant there was even the possibility of needing a wheelchair or two walking sticks and a doctor had told him he may never walk properly again,’ added the prosecutor.

One police doctor Williams had to see concluded after twelve months of physical and mental treatment he could return to duty and his planned ill-health retirement was scrapped, a decision the defendant appealed.

There was no neurological reason found for his condition and all Williams’ scans were normal.

When one senior officer googled Williams’ address for a scheduled home visit he found the defendant was the director of three companies involved in dog walking.

Officers from the Directorate of Professional Standards, with a search warrant, raided the address on October 3, 2017 and filmed their search.

‘Mr. Williams appears to move about unaided and there were no signs of any aids to assist his movement.

‘The copies of medical certificates with the hardened correction fluid on were seized,’ said Mr. Higgins.