‘Politics is BORING without me’: Trump says it’s him or ‘Sleepy Joe’ Biden at Pennsylvania rally

Donald Trump boasted that he makes politics exciting as he urged voters Tuesday not to cast their ballot for Democratic nominee Joe Biden because he is ‘boring.’

‘This is an election between a Trump super recovery and a Biden depression,’ the president told thousands of his supporters gathered for an outdoor rally in Erie, Pennsylvania. ‘You will have a depression the likes of which you have never seen.’

‘If you want depression, doom and despair, vote for Sleepy Joe. And boredom,’ Trump continued.

‘Nobody’s going to be interested in politics anymore,’ he predicted.

He also gave his rival another nickname during his rally Tuesday evening: ‘Gonzo Joe.’

Donald Trump said Tuesday during a rally in Erie, Pennsylvania that politics would be ‘boring’ without him as he made his closing arguments for why to vote against Joe Biden in two weeks 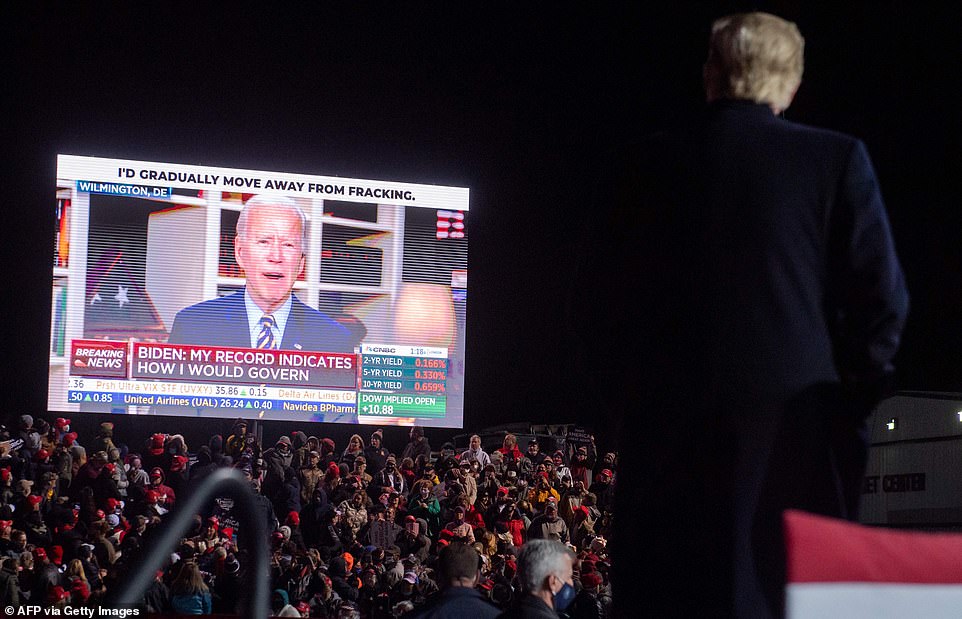 ‘Nobody’s going to be interested in politics anymore’ if Biden wins, Trump said. He also played a compilation video of Biden and vice presidential nominee Kamala Harris railing against fracking – a large industry in western Pennsylvania 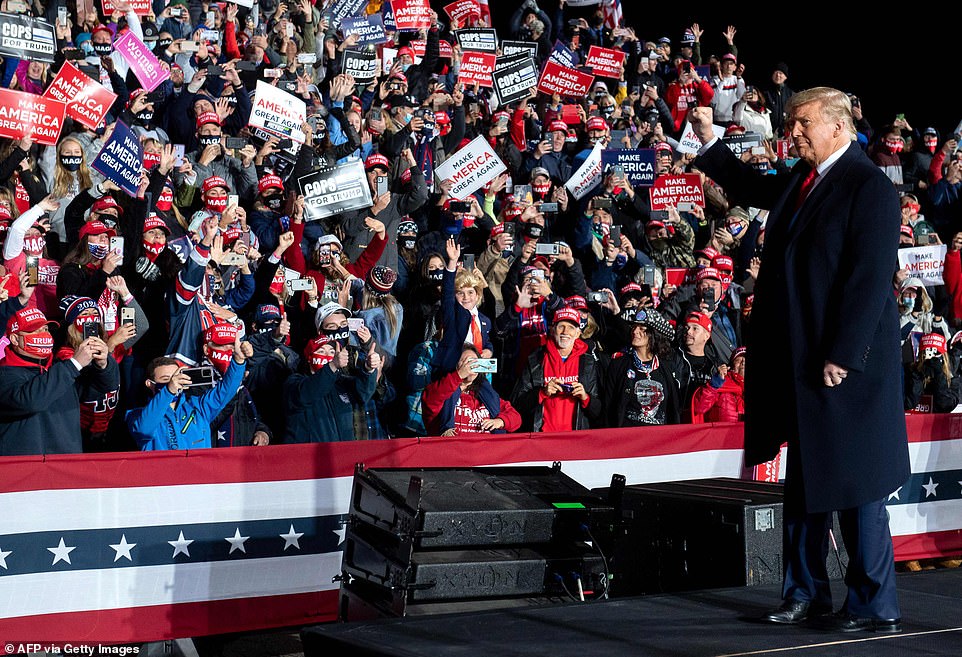 Trump traveled to Erie, Pennsylvania for his eighth rally in five days 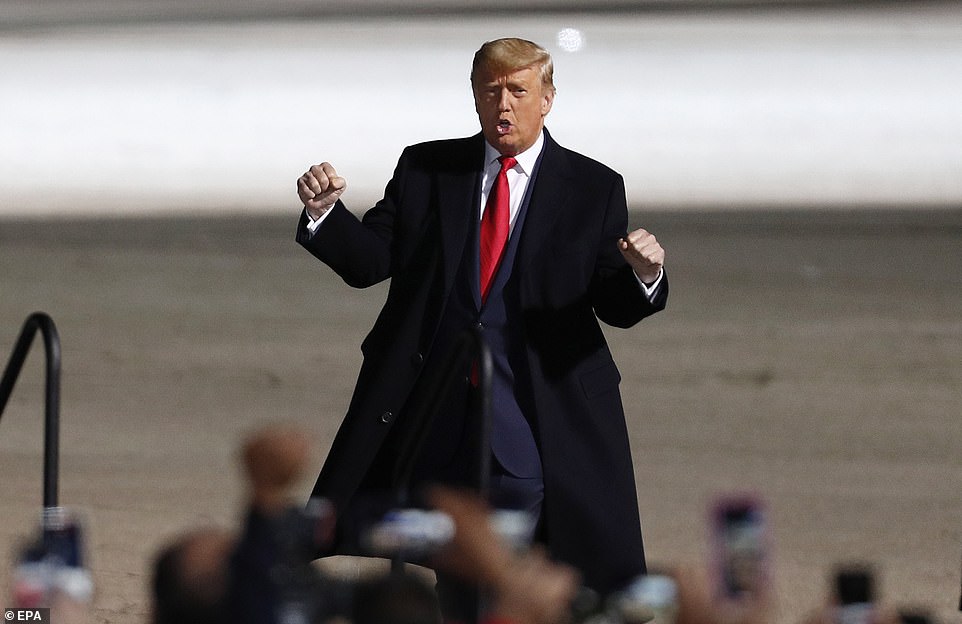 He danced to The Village People’s ‘YMCA’ at the close of the rally, even though he faced criticism for his dance moves, which have been on display at the last few massive campaign events

He spent much of his rally blasting his Democratic rival, who he will face in Nashville, Tennessee for the second face-to-face debate Thursday night.

The second debate, a town hall style event scheduled for last week in Miami, Florida, was canceled after the president refused to participate in a virtual restructure of the event.

He also blamed his 2016 rival Hillary Clinton for a technical glitch in the program, which is rare for a Trump rally.

The president’s microphone cut out at one point, prompting him to tap on the head of the mic until it turned back on a few seconds later.

‘Is the mic ready? Yes. I wonder who did that to our mic,’ Trump facetiously quipped. ‘I don’t believe it was Joe. You know who it was, Crooked Hillary. I think it was probably Crooked Hillary.’

At the end of his rally in Erie, Trump again closed out the night by awkwardly dancing to The Village People’s ‘YMCA’, which has recently become the song he uses to wrap up his rallies.

Trump has faced a litany of feedback from media users and political commentators regarding his dancing skills, which usually consists of jerky arm movements with his fists closed and pumping out to the side.

An hour before taking stage, Trump previewed that he would be releasing part of a supposedly disastrous interview with ’60 Minutes’ where the president ended up walking out and not returning to complete the pre-recorded CBS News program. 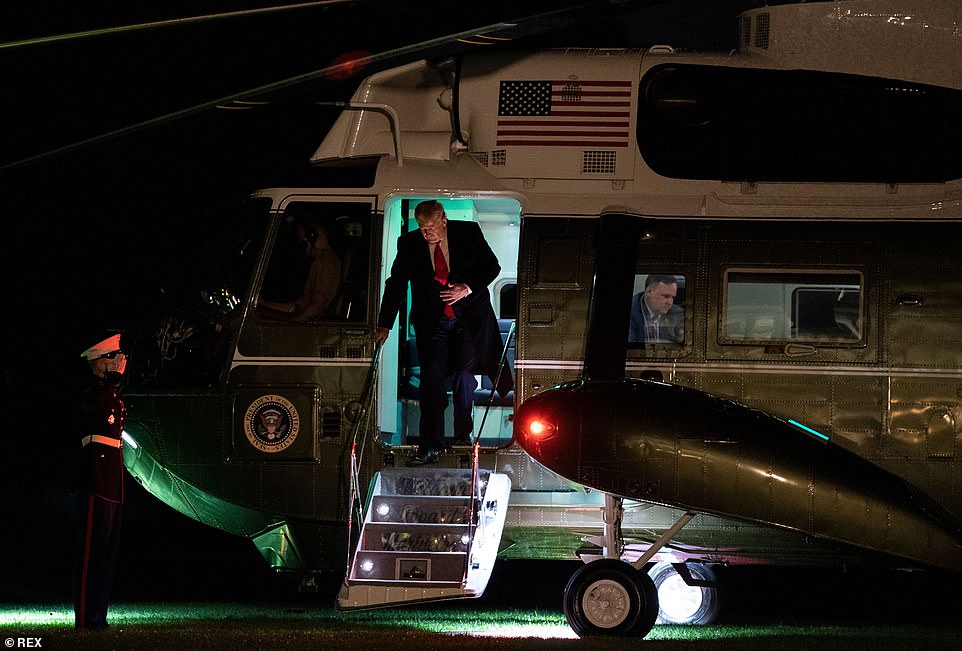 Trump exits Marine One as he arrives back at the White House in Washington DC after the rally in Erie, Pennsylvania

‘I am pleased to inform you that, for the sake of accuracy in reporting, I am considering posting my interview with Lesley Stahl of 60 Minutes, PRIOR TO AIRTIME!’ Trump tweeted Tuesday evening. ‘This will be done so that everybody can get a glimpse of what a FAKE and BIASED interview is all about. Everyone should compare this terrible Electoral Intrusion with the recent interviews of Sleepy Joe Biden!’

He reiterated this promise at his rally.

Pennsylvania is a swing state that swung red in 2016, going for Trump 48.2 per cent – winning against Hillary Clinton by only a 0.7 per cent margin.

Trump started off his rally by reminding thousands of his most ardent supporters in Pennsylvania of his 2016 upset victory there.

Trump said he wouldn’t be visiting Erie if it weren’t for the ‘China virus’ plunging his campaign into uncertainty – as he claims his victory was all but won before the coronavirus pandemic hit the U.S.

‘You know what, four or five months ago when we started this whole thing – because you know before the plague came in, I had it made – I wasn’t coming to Erie,’ Trump said in a frank moment. ‘I mean, I have to be honest.’ 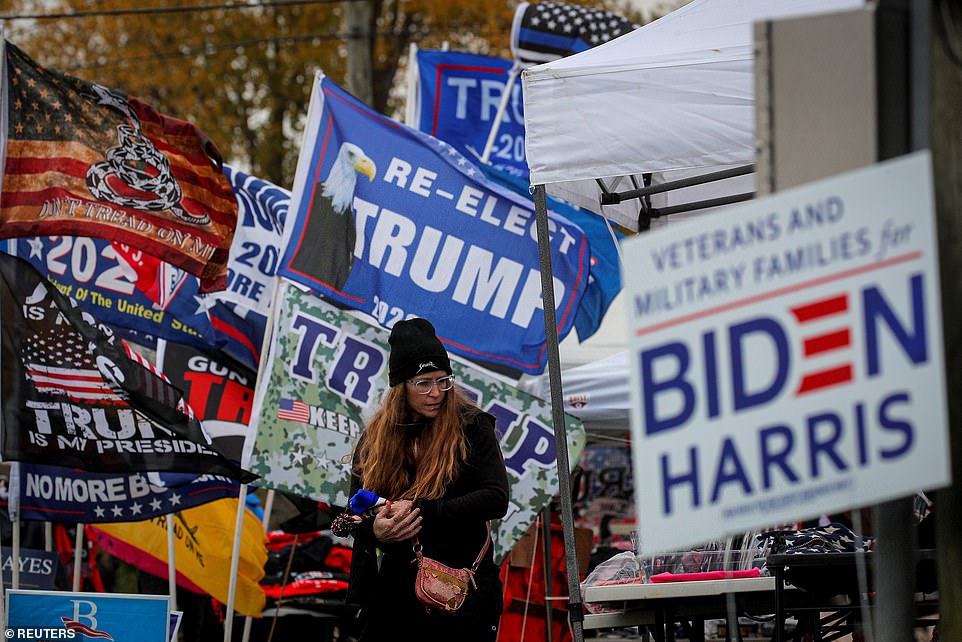 Several flags in support of Trump flew outside the rally location in Erie, while a yard sign could be seen showing veterans and military families in support of Biden’s candidacy

‘There was no way I was coming – I didn’t have to,’ he continued. ‘We had this thing. We were so far up, we had the greatest economy ever, greatest jobs, greatest everything. And then we got hit with the plague.’

Trump added: ‘If we win Pennsylvania, we win the whole thing.’

Pennsylvania holds 20 Electoral College votes, making it one of the most influential swing states – second to Florida, which holds 29.

Never before seen at a Trump rally, the president played a compilation of clips of Democratic nominee Joe Biden and vice presidential candidate Kamala Harris railing against fracking – a top issue especially in the western areas of the Keystone state.

Biden vows he will not ban fracking if he wins in November, contrary to claims from the president that he would do so.

Trump called the video, projected on the jumbotron that features the president throughout his rally remarks, an ‘original Donald Trump Broadway play.’

Trump will hold another rally Wednesday night in Gastonia, North Carolina – another swing state – instead of engaging in debate preparations ahead of his face off with Biden Thursday night.

The two will come head-to-head in-person in Nashville for their second and final scheduled debate before the election, which is less than two weeks out.