A third of Britons want the government’s 14-day quarantine to be even tougher, a poll found today – despite scientists dismissing the plan as pointless.

With only very limited exceptions for lorry drivers and NHS workers, from Monday everyone coming to the country by plane, rail or sea will be ordered to give an address and self-isolate for two weeks, with spot checks from officials.

Experts insist the measures will make no difference while the UK’s own transmission rates are so high, while the aviation industry has warned of mas redundancies as the UK ‘puts up a closed sign’.

But the exclusive poll by Redfield & Wilton Strategies found 42 per cent are satisfied with the move, and 35 per cent believe it does not go far enough.

The study, carried out this week, also underlines the extent of ‘coronahobia’ among the public, with 73 per cent saying they would not feel safe in a plane in the near future.

There are deep doubts over the the prospect of ‘air bridges’ to low-infection countries, even though they could allow people to take foreign holidays without the need to quarantine for two weeks at either end.

Some 42 per cent support the idea, being worked on by ministers, but 39 per cent were against it.

A poll for MailOnline by Redfield & Wilton Strategies found 42 per cent are satisfied with the quarantine move, and 35 per cent believe it does not go far enough

Northern Ireland Secretary Brandon Lewis defended the plans in a round of interviews this morning, saying it was the ‘right time to do it’ 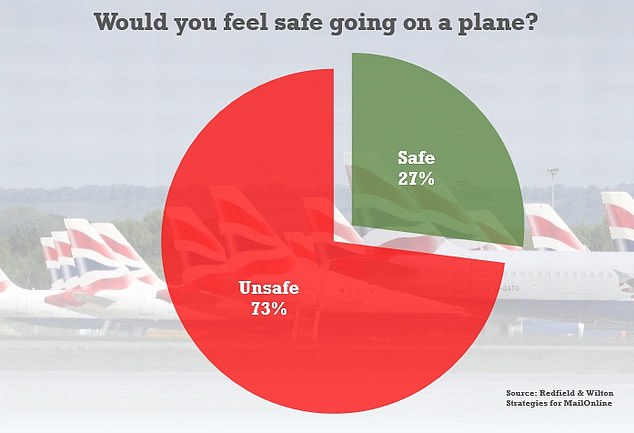 The study also underlines the extent of ‘coronahobia’ among the public, with 73 per cent saying they would not feel safe in a plane in the near future

The research suggests that much of the public has already given up on holidays this year, with just 14 per cent per cent saying they were planning to go abroad in 2020, and only 15 per cent intending to have a break within the UK.

Some 59 per cent said they are planning to avoid holidays altogether this year, compared to 73 per cent who said they were intending to go away before the pandemic hit.

Ms Patel insisted the clampdown was ‘proportionate’ yesterday, but she was assailed by a slew of Conservatives. Former PM Theresa May accused the government of ‘closing Britain off from the rest of the world’, while ex-minister Theresa Villiers said it must act to ‘save jobs in aviation and let families go on holidays in the sun’.

Ex-trade secretary Liam Fox said the government’s policy contortions resembled ‘gymnastics’, and the focus should be on test and trace rather than ‘unnecessary economic isolation’.

Ryanair chief Michael O’Leary branded the system ‘utterly ineffective’ saying because spot checks are carried out on the phone people could trick officials even if they were out playing golf or on the beach.

Professor Robert Dingwall, one of the government’s own SAGE advisers, said people coming to the UK were more likely to be infected by border officers than bring the virus into the country.

The Nottingham Trent University academic, a member of the Scientific Pandemic Influenza Group on Modelling (SPI-M), told BBC Radio 4’s Today programme: ‘We are not seeing new clusters that are taking off from people who have been travelling abroad.

‘I think we would really need to get the level in this country significantly further down before quarantine started to become a useful measure.

‘That I think, even then, we would have to see something that is targeted on countries with a significantly higher level of community transmission than ourselves – and there aren’t too many of those around, I’m afraid.

‘If you’re a holiday destination in Europe in a country that has worked really hard to get its levels of community transmission down and you’re perhaps looking forward to seeing the end of the virus circulating, apart from in isolated outbreaks, then you have to wonder would they really want to welcome a load of British tourists from a country which hasn’t fully got this virus under control yet?’ 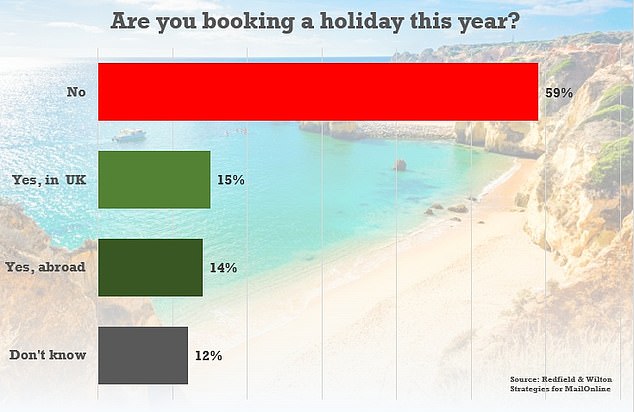 The research suggests that much of the public has already given up on holidays this year, with just 14 per cent per cent saying they were planning to go abroad in 2020 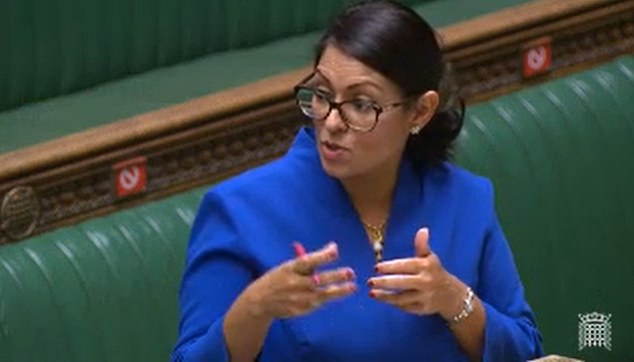 Priti Patel insisted the clampdown was ‘proportionate’ yesterday (pictured), but she was assailed by a slew of Conservatives in the Commons

But Northern Ireland Secretary Brandon Lewis defended the plans in a round of interviews this morning, saying it was the ‘right time to do it’.

Speaking on BBC Breakfast, the Northern Ireland Secretary said: ‘Even if a (transmission) rate in a certain country is lower than ours, any single person who comes into the country who is potentially carrying the virus makes a marginal impact.

‘The reality is that we want to stay ahead of this, the Transport Secretary is working across government to look at how we fine-tune this as we go forward.’

When asked why it has taken so long to impose quarantine, he said: ‘The higher the spread of the virus here in the community in the UK, the more negligible any difference is of somebody coming into the country.

‘As the spread in our communities is now much lower, the marginal impact of anyone coming into the country (with Covid-19) is much higher – that is why this is the right time to do it.’

He added: ‘As our community transmission of the virus is now so much lower, somebody coming into the country really does make an impact.’

Mr Lewis admitted that under the new quarantine policy, a family from Spain could visit the Lake District for a holiday, while a family from London cannot.

He told BBC Breakfast: ‘As long as they are following the guidance and doing the quarantine as outlined, and giving the details to Public Health England (PHE), somebody from abroad can come to the UK but they will have to quarantine for 14 days.’

Mr Lewis said: ‘PHE will be checking up on this, there will be substantial fines for people who don’t follow those guidelines, they will have to quarantine – here within the UK we are gradually looking at how we can ease the lockdown measures.

‘We’ve got to do that in a very managed and cautious way.’