Is this a solution to traffic pollution? ‘Supershrub’ at the roadside can trap fuel emissions, experts say

For those who live on busy roads, reducing air pollution might be simpler than you think – thanks to an emissions-trapping ‘supershrub’.

Cotoneaster, a common hedge plant, was found to absorb more pollution than other similar shrubs, according to the Royal Horticultural Society.

With its bushy, hairy leaves and dense canopy, cotoneaster was 20 per cent more effective at soaking up traffic fume particles than plants such as hawthorn and western red cedar.

And, in just seven days, researchers found that a well-managed dense hedge of only one metre long mopped up the same amount of pollution a car emitted over a 500-mile drive.

Cotoneaster, a common hedge plant (pictured) was found to absorb more pollution than other similar shrubs, according to the Royal Horticultural Society

However, although cotoneaster was found to be more effective on roads with heavy traffic, it did not make a difference along quieter streets.

In other areas where encouraging nature was key a mixture of species was recommended.

However Dr Blanusa added that any hedge was better than no plants in people’s front gardens at all.

‘A hedge, even if it’s not the top performer for air quality, may still be quite a good barrier for noise or to help mop up excess rain,’ she said.

‘On major city roads with heavy traffic we’ve found that the species with more complex denser canopies, rough and hairy-leaves such as cotoneaster were the most effective.

‘We know that in just seven days a one-metre length of well-managed dense hedge will mop up the same amount of pollution that a car emits over a 500-mile drive.’

She said cotoneaster would be ideal to plant along busy roads in pollution hot spots, while in other areas where encouraging nature was key – a mix of species would be recommended.

While a survey of 2,056 people for the RHS found that a third (33%) were affected by air pollution, just 6% are taking active steps in their gardens to alleviate it. 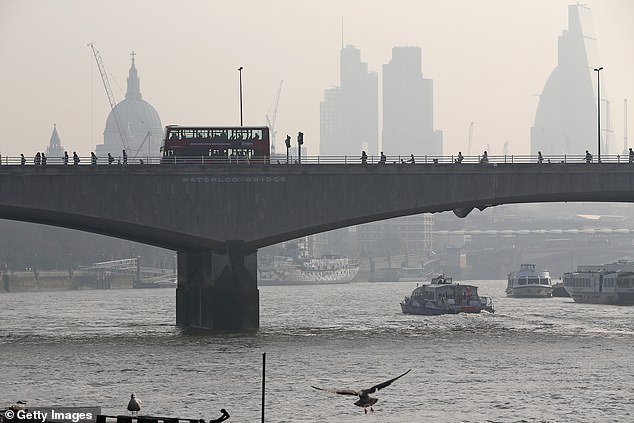 In just seven days, researchers found that a well-managed dense hedge of only one metre long mopped up the same amount of pollution a car emitted over a 500-mile drive. Pictured: London covered in air pollution and smog in 2015 (file photo)

Some 86% of those surveyed by YouGov said they cared about environmental issues, while 78% worry about climate change, and the RHS is hoping to harness that interest to encourage people to think about helping the environment in their garden.

Professor Alistair Griffiths, RHS director of science and collections, said: ‘We are continually identifying new ‘super plants’ with unique qualities which when combined with other vegetation provide enhanced benefits while providing much needed habitats for wildlife.

‘If planted in gardens and green spaces where these environmental issues are most prevalent we could make a big difference in the fight against climate change.’

RHS scientists are now moving into the Hilltop centre, at the charity’s gardens at Wisley in Surrey, which contains facilities to enable them to increase research into these areas, as well as exhibition spaces and ‘living laboratory’ gardens.