The picturesque snowscapes of Siberia have been turned an eerie black from pollution, leaving cars, buildings, streets and fields covered in thick soot.

Alarming pictures from the snow-covered region of Russia show how the pristine white snow has been filled with a dirty, thick layer of black powder.

Pollution from coal plants in the industrial region of Kemerovo has been blamed for the ghostly phenomenon blighting the landscape.

Worried residents likened the scene to the ‘snow in hell’ while other scrawled SOS messages in the grimy covering. 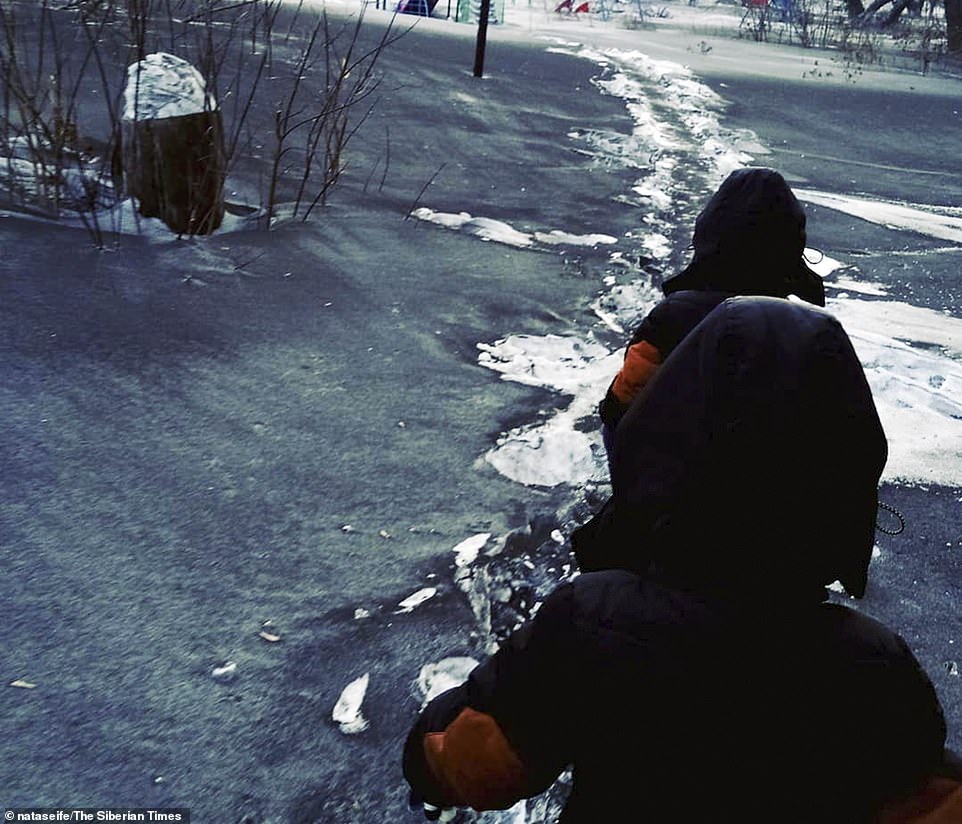 Children in Kiselevsk, Siberia, walking through the blackened parks after the snow became covered in coal pollution 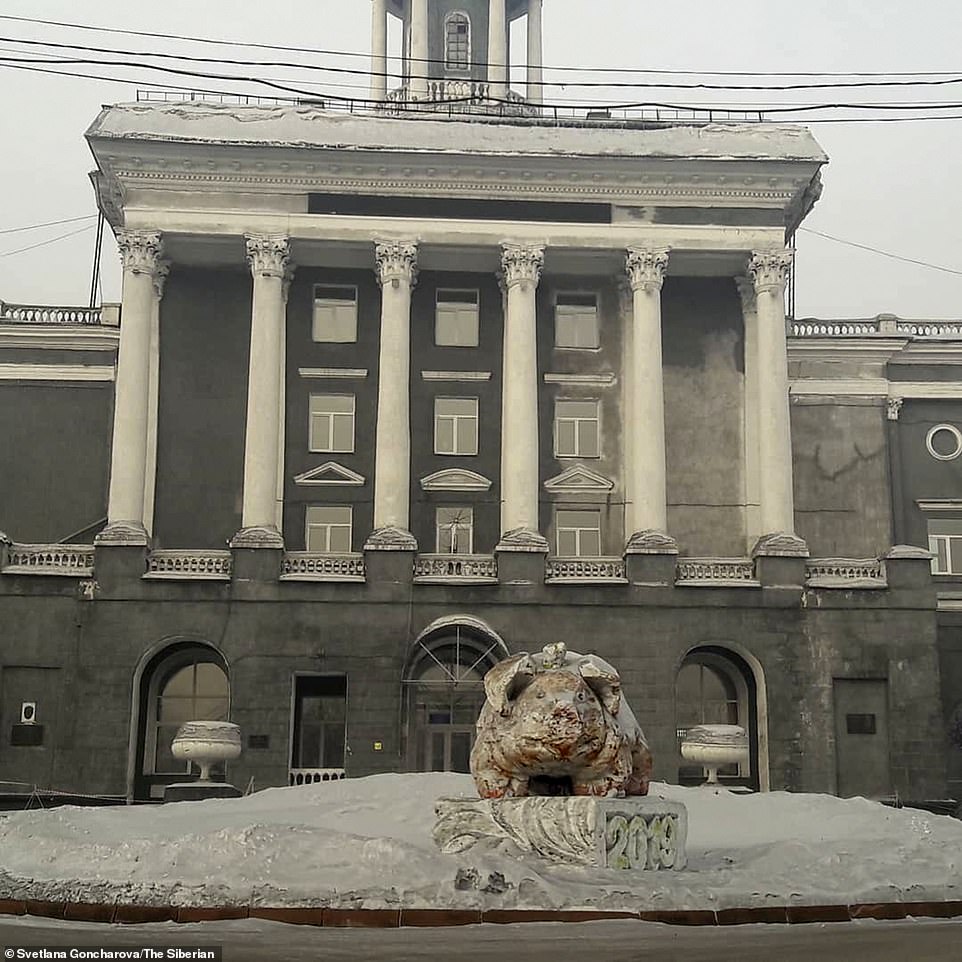 Eerie: Buildings and statues in the city of Prokopyevsk have also been covered in the creepy black snow 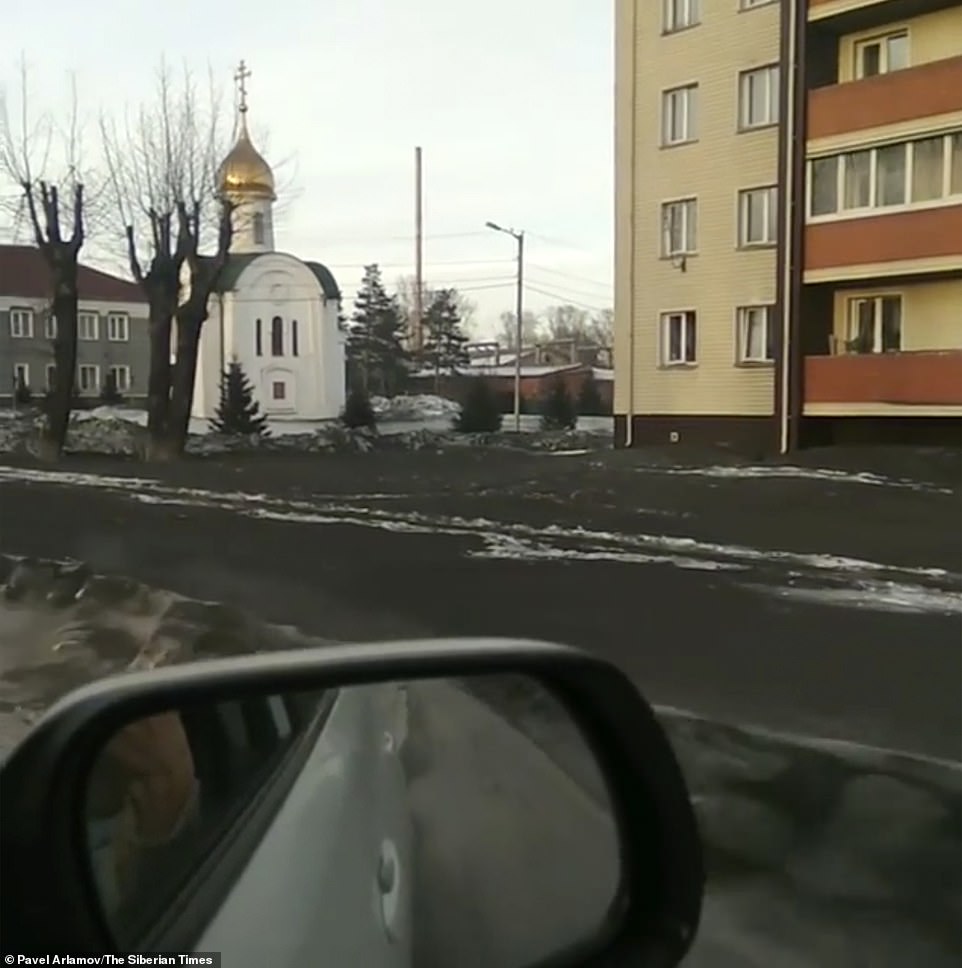 Roads have been left with the dirty covering of snow that has made the Siberian region seem ‘hellish’, residents have said

One picture posted online shows children playing in the black snow that has caked roads, parks, vehicles, buildings and statues in the area.

Local media in Russia blame local coal processing plants, and highlighted how parked cars were caked with a thick lawyer of black grime.

One comment on the morbid scene from a worried local read: ‘Is this what snow looks like in hell?’

A picture posted online shows the Russian word ‘ПОМОГИТЕ’ – or ‘help us’ – written in the filthy snow.

But others say there is a perverted ‘beauty’ in the spooky gloom.

Kemerovo is famous both as Russia’s leading coalmining region but also as home to Siberia’s best ski slopes, famed for an annual swimwear piste run. 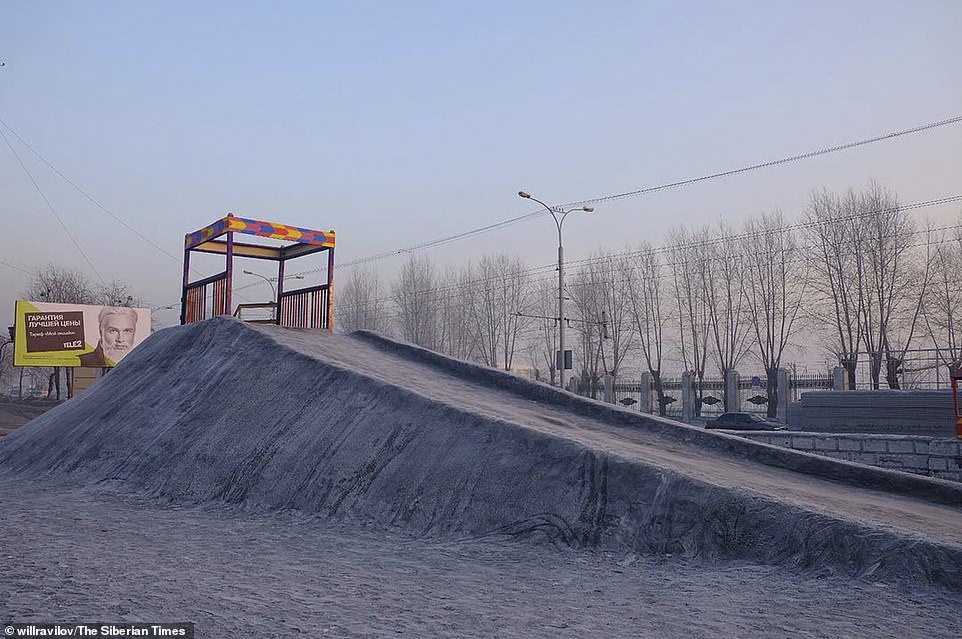 A ski slope in Prokopyevsk was left with a layer of snow dusted with the black powder, which was blamed on the nearby coal processing plants 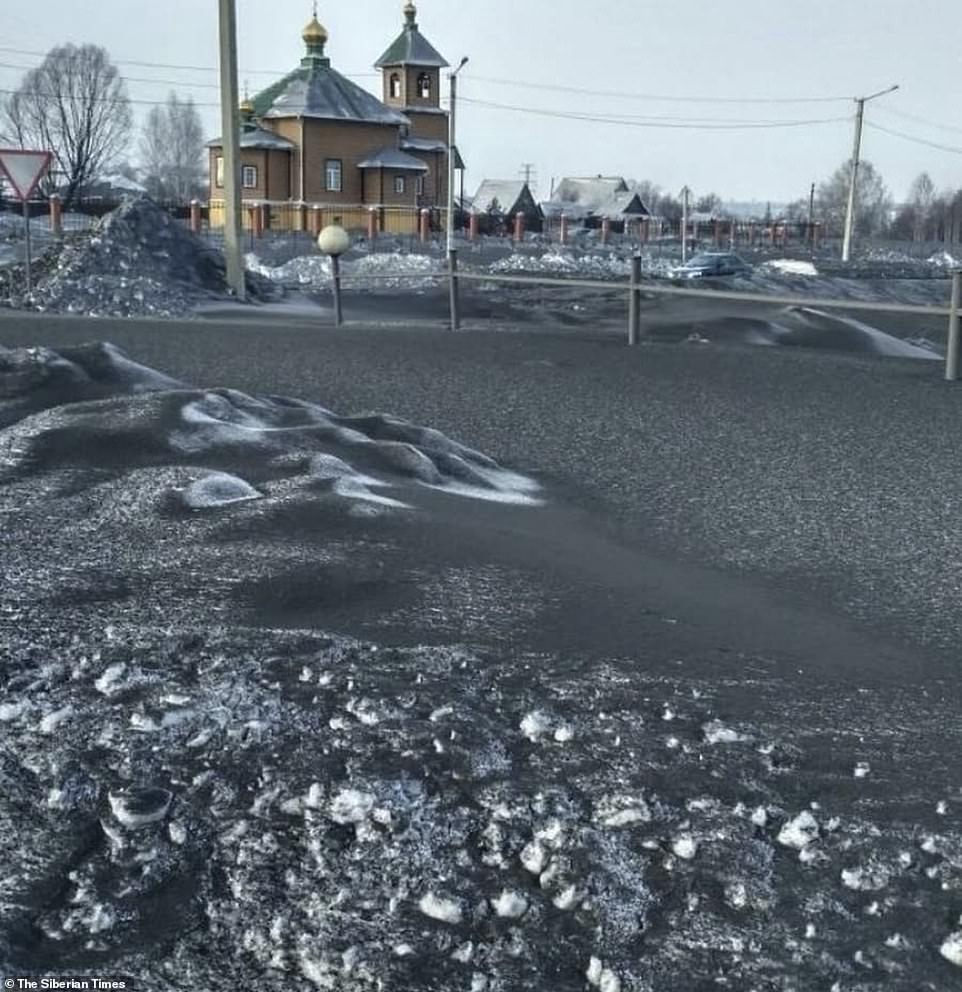 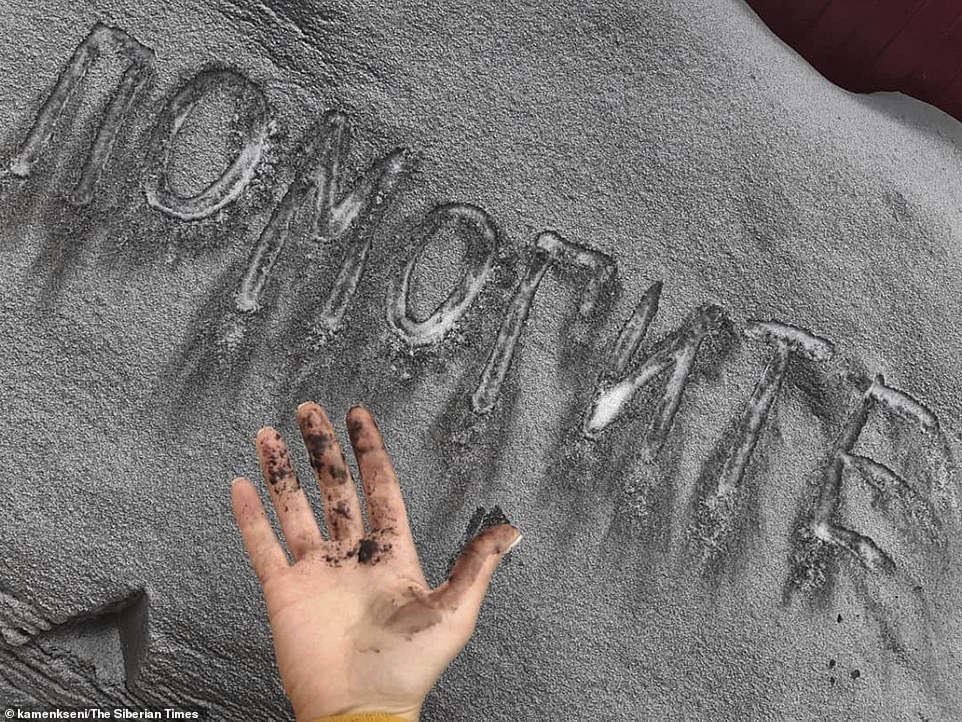 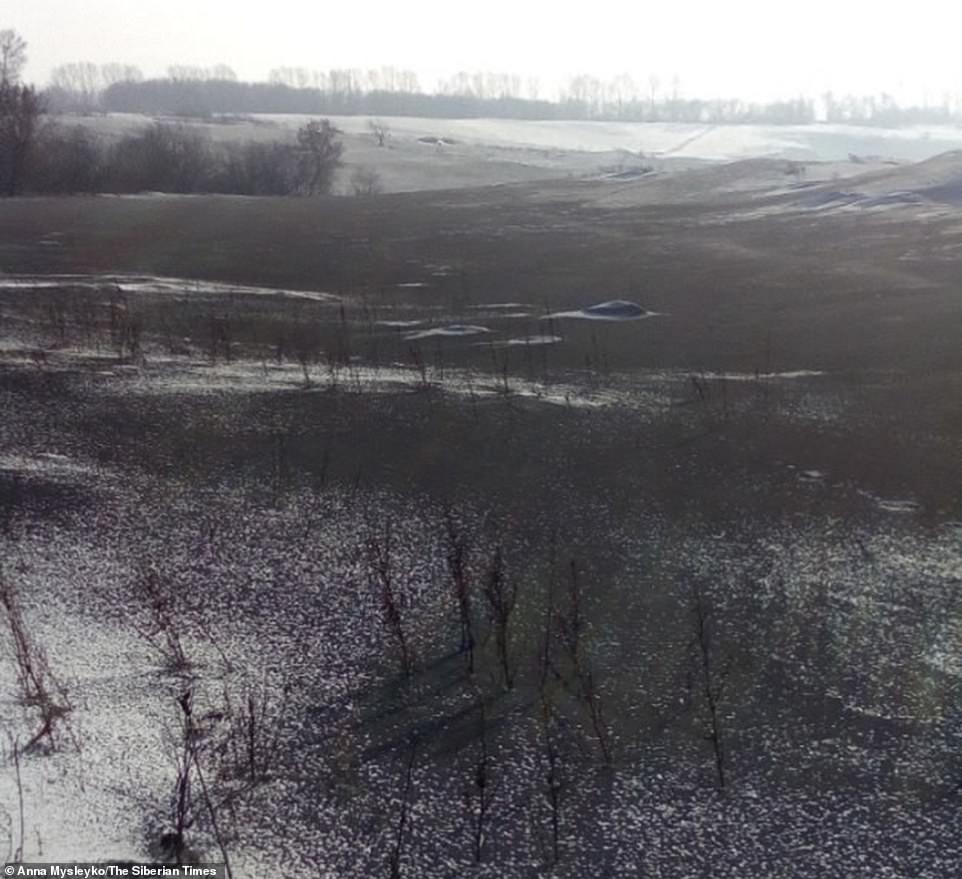 So far the colourful slopes of resort Sheregesh have not been tarnished by the pollution hitting residents elsewhere in the region.

State prosecutors are now examining whether to bring criminal prosecutions for pollution.

Boss Anatoly Volkov told Vesti-Kuzbass TV channel that a shield to protect the air from coal power had stopped working.

Deputy governor of Kemerovo region Andrei Panov, who is in charge of ecology, is to meet local environmentalists to discuss the matter and also blames coal boilers and car exhausts as well as factories. 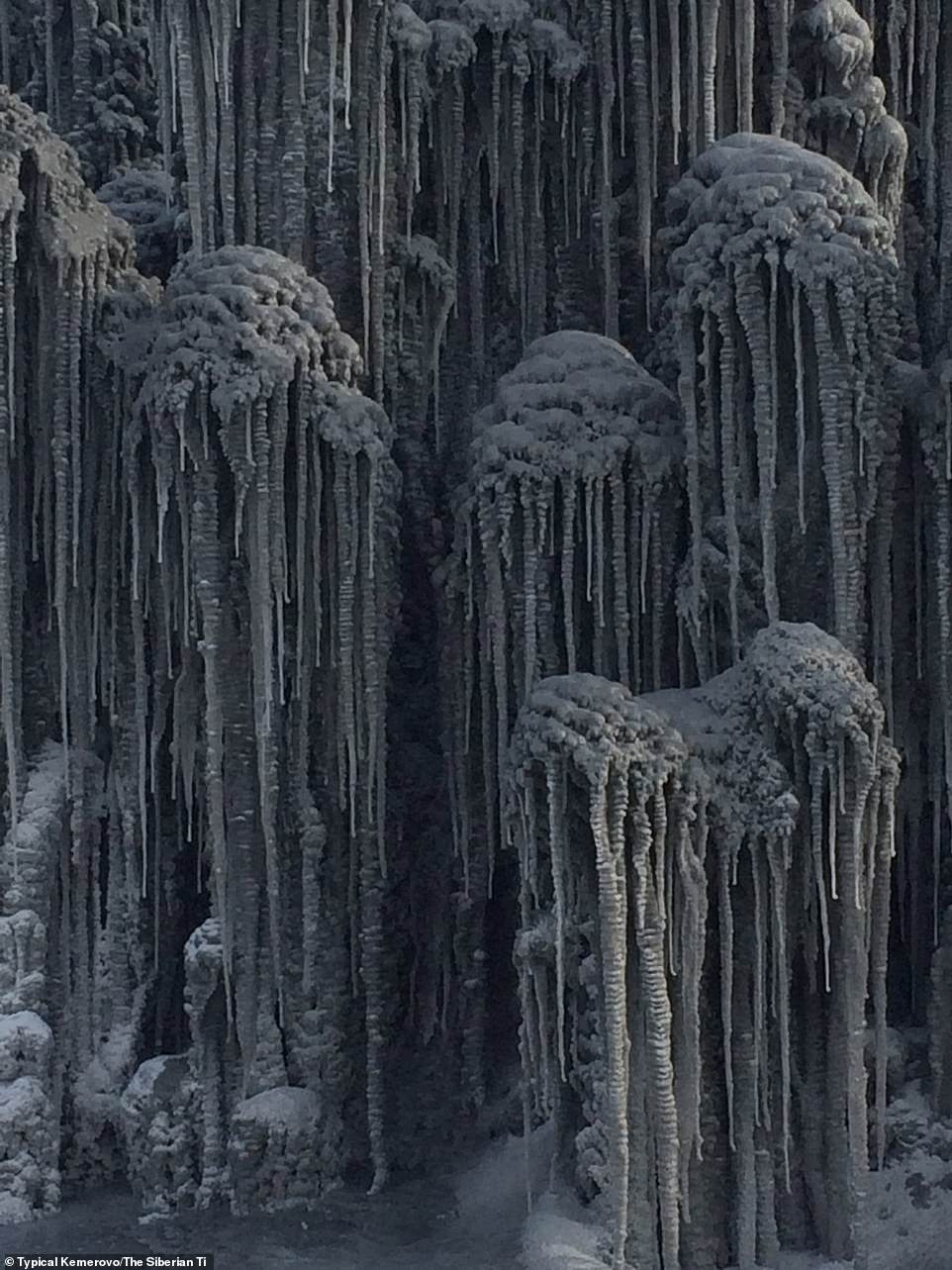 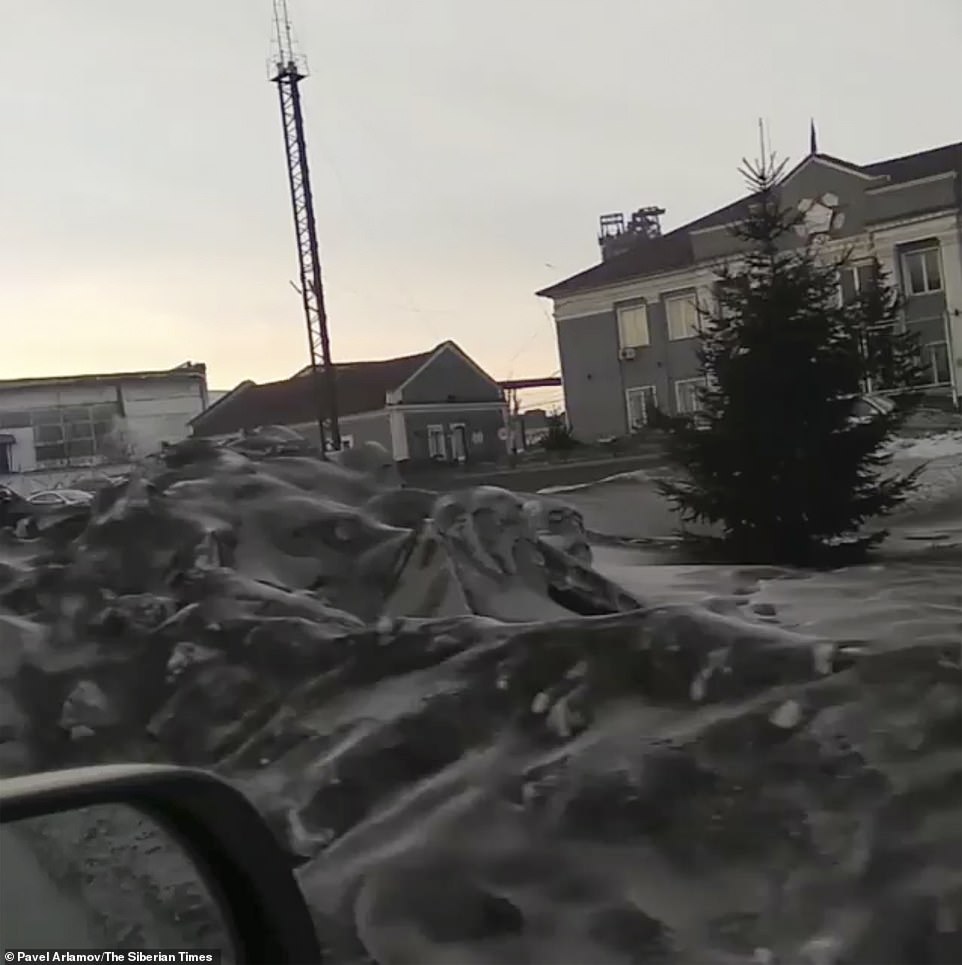 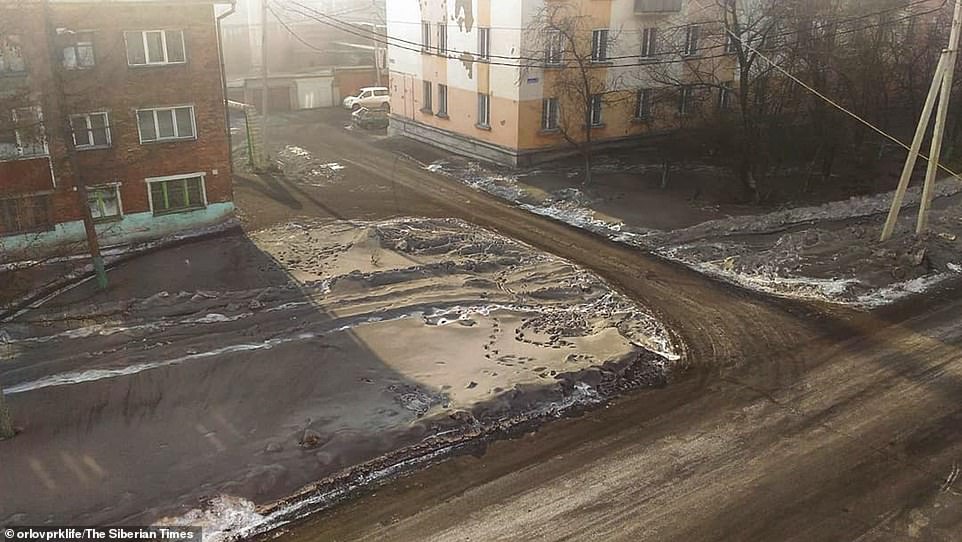 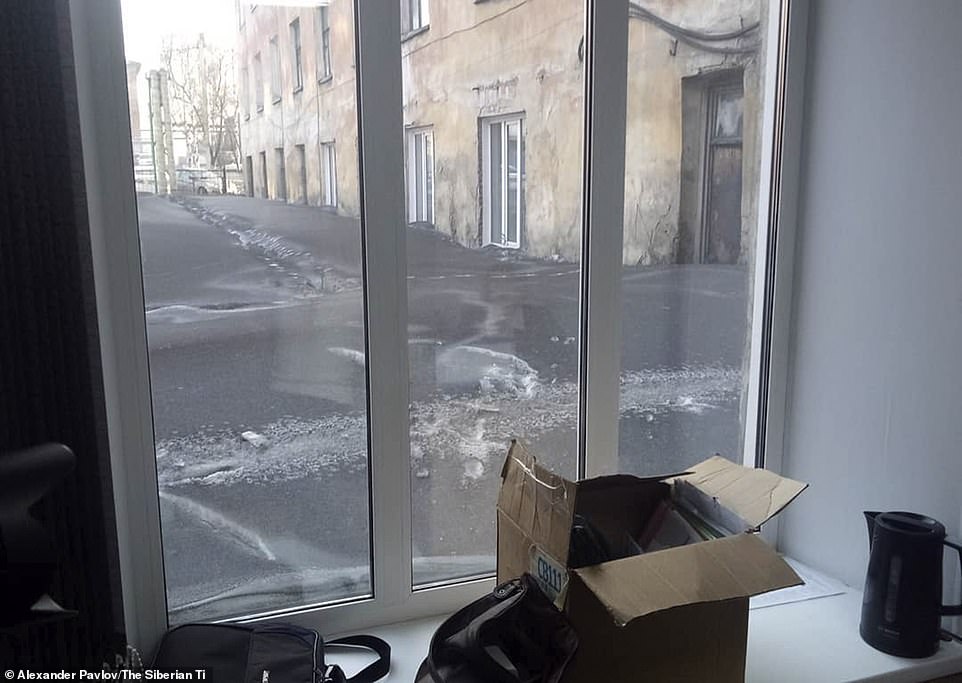 There has been a strong reaction from locals on social media.

Residents have pointed the finger at other plants too, alleging there is a long-term lack of environmental protection in an region that’s lifeblood is coal, reported The Siberian Times.

‘No cleansing systems, all the waste, dust and dirt, coal lay in the area. Our children and us are breathing it. It’s just a nightmare,’ a local said.

Another commented: ‘The government bans smoking in public. But let us inhale coal dust all together and let it reside in our lungs.’

One resident added: ‘The future of our children is terrifying.’ 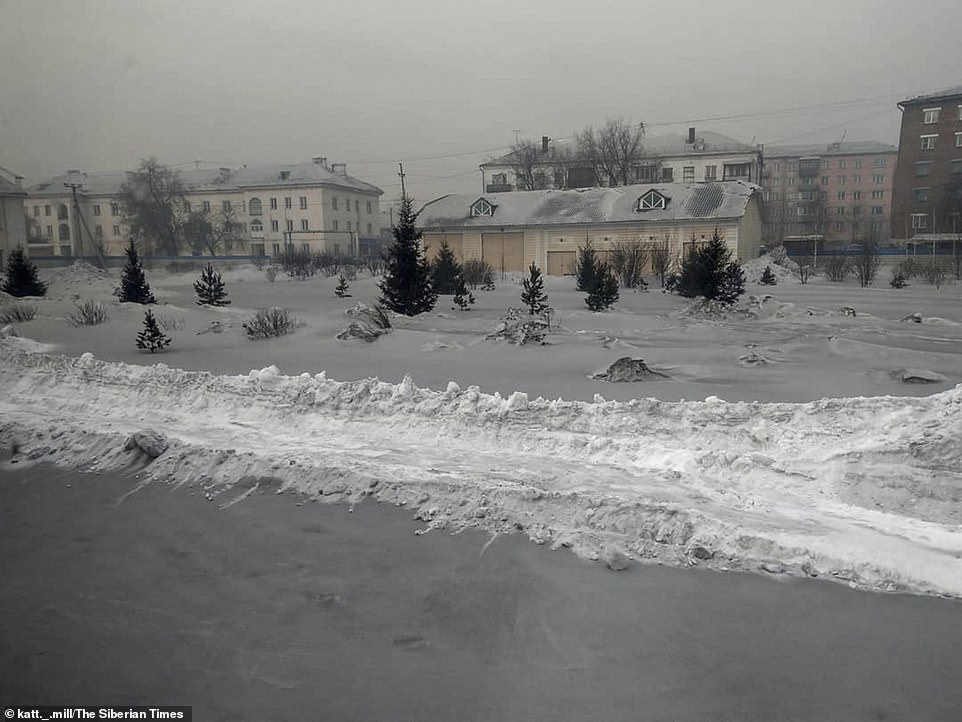 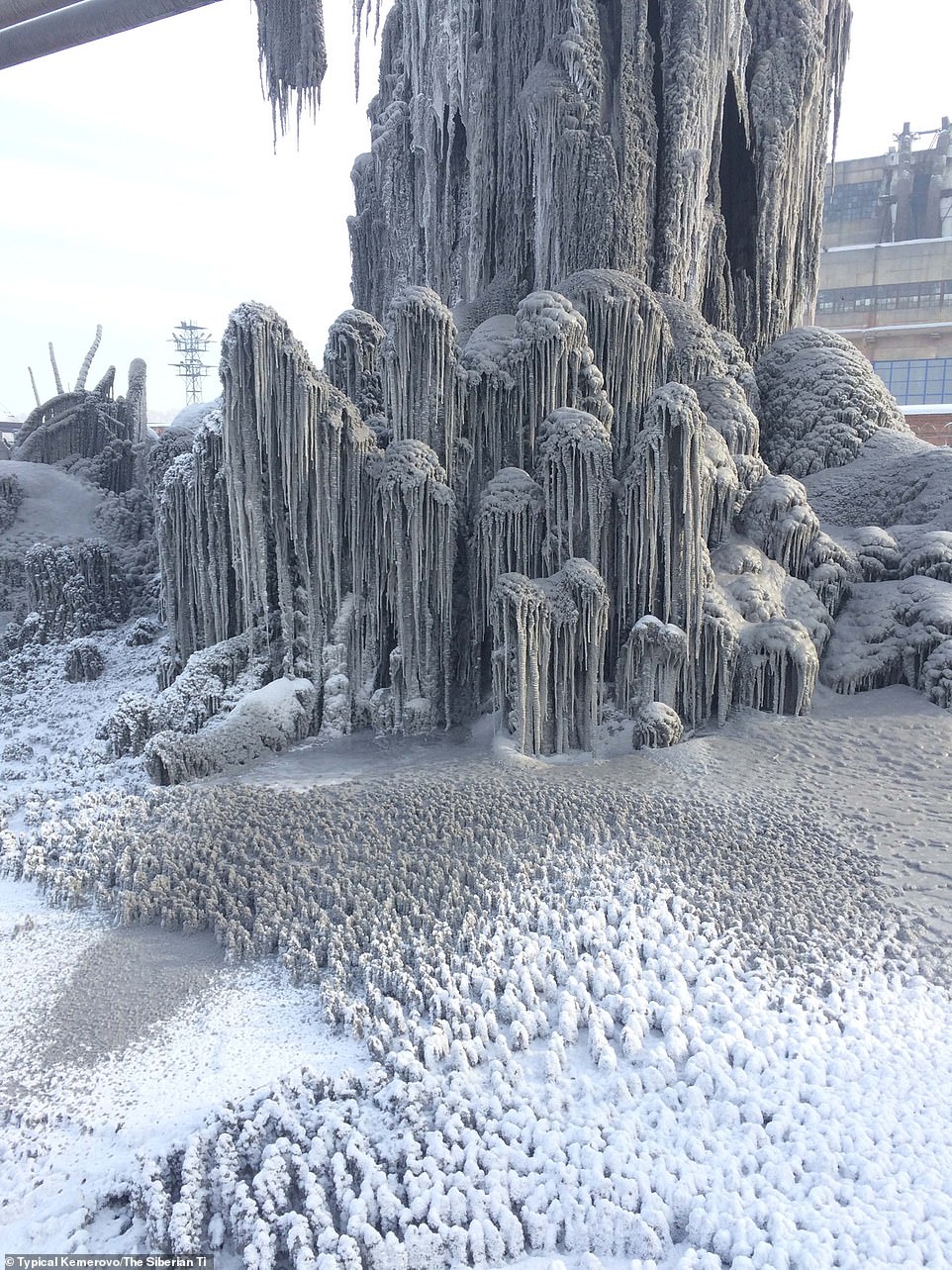 Creepy: Another frozen ice fountain in the Kemerovo region was left with the black and grey covering from pollution 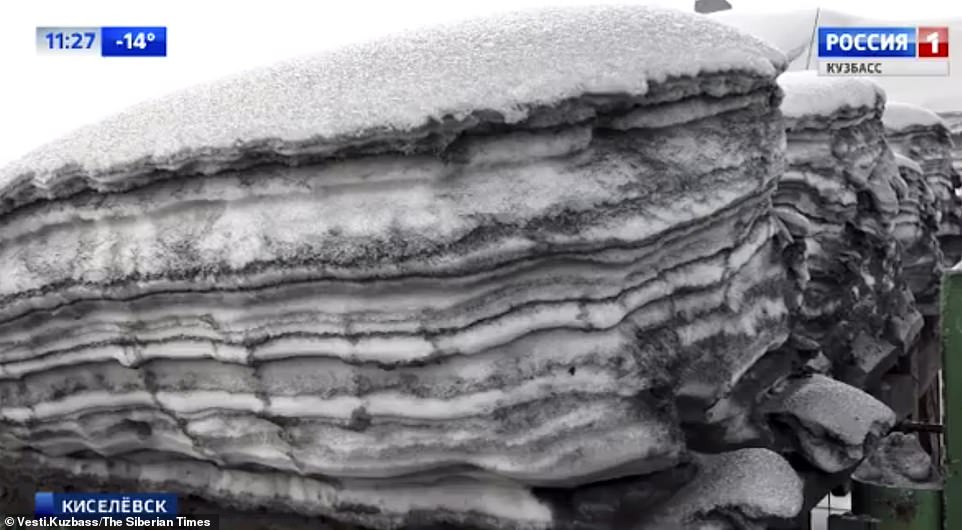 One resident on social media moaned: ‘The government bans smoking in public. But let us inhale coal dust all together and let it reside in our lungs’ 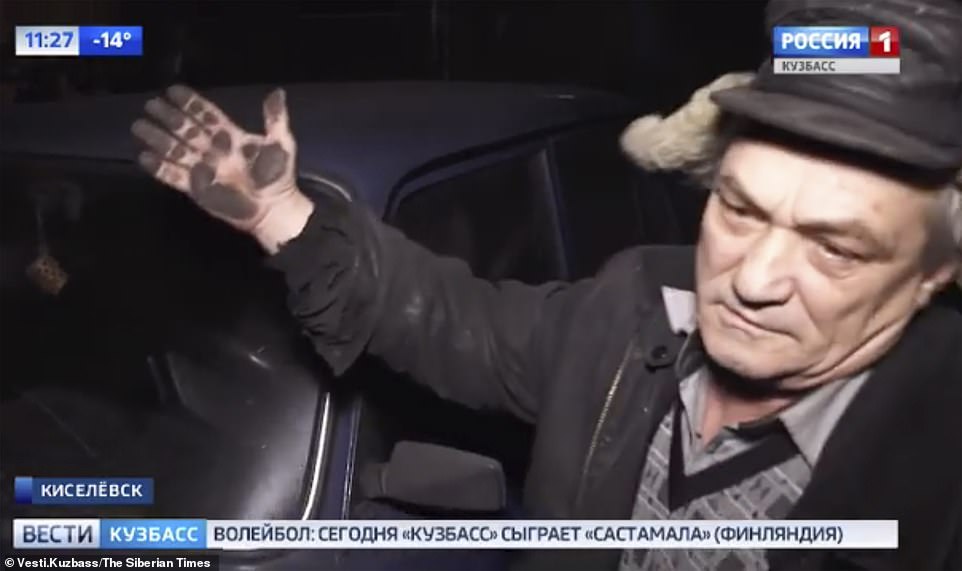