Pompeo says the administration has responsibility to prevent North Korean leader Kim Jong Un being able threaten the U.S. with a nuclear weapon.

Secretary of State nominee Mike Pompeo, who is currently the CIA director, said Thursday before the Senate Foreign Relations Committee that he doesn’t support regime change in North Korea 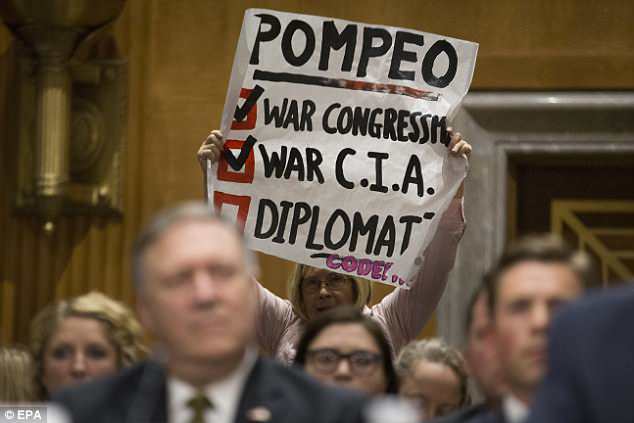 A Code Pink protester is seen behind Mike Pompeo, currently the nation’s CIA director who President Trump wants as his next secretary of state, after firing Rex Tillerson

But he says he’s not advocating regime change.

He says his role as a diplomat is to avoid a confrontation.

After a year of escalating tensions over North Korea’s progress in its weapons development, President Donald Trump has pivoted to diplomacy and plans to meet Kim in May or early June.

With Pompeo in the position of currently leading the CIA, but likely taking the helm of the State Department, it’s been the top spy’s team that has made preparations for the summit, between Trump and the North Korean leader.

The CIA has used intelligence back-channels to speak to the North Koreans, as they settle on a location for the talks, the New York Times first reported.

The North Koreans would like to host Trump in their capital, Pyongyang.

Another location that’s been discussed is the Mongolian capital of Ulaanbaatar.

With the meeting with Kim approaching, Trump wanted a secretary of state in lockstep with him, and found that in Pompeo.

Beyond dealing with the North Koreans through the channel that runs between the CIA and the Reconnaissance General Burea, Pompeo has also been in close touch with the director of South Korea’s National Intelligence Service, Suh Hoon, who was the individual who brokered Kim’s invitation to Trump, the Times said.

The U.S. State Department has been communicating with the North Koreans through their mission at the United Nations, CNN also said.