Pope Francis has become the first pontiff to visit the Arabian Peninsula today where is expected to raise the humanitarian crisis in Yemen.

He landed in Abu Dhabi just hours after issuing his strongest condemnation yet of the war in Yemen, where his host the United Arab Emirates has a leading military role.

A young boy and girl in traditional Emirati dress handed the pontiff flowers and the two leaders then walked past a guard of honour, all with traditional Arabic daggers at their waists.

Pope Francis and Sheikh Mohammed smiled and spoke to each other as they walked through the airport terminal. 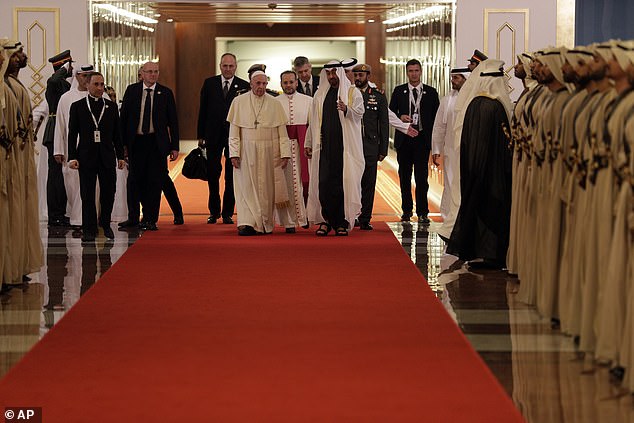 A young boy and girl in traditional Emirati dress handed the pope flowers and the two leaders walked past a guard of honour, all wearing traditional Arabic daggers at their waists 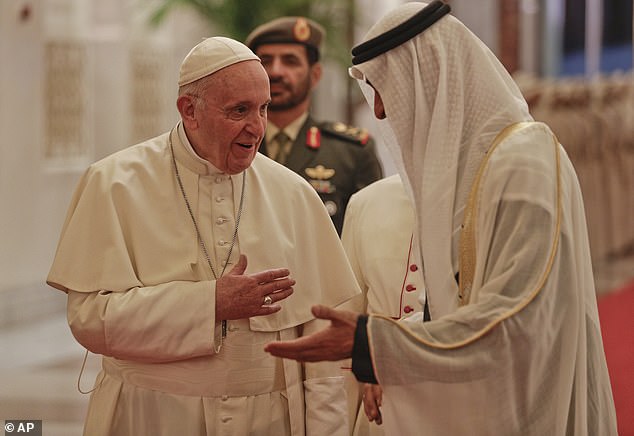 The pope also met a host of cabinet ministers in a greeting line, as well as Catholic and Muslim officials.

Before he boarded his Alitalia flight, the pope said in his regular Sunday address in Vatican City that he was following the urgent humanitarian crisis in Yemen with great concern.

He urged all sides to implement a fragile peace deal and help deliver aid of food and medicine to millions of starving people.

The UAE plays a leading role in the Saudi-led coalition battling the Iran-aligned Houthi group to restore the internationally recognised government in the nearly four-year war that has pushed Yemen to the brink of famine.

Pope Francis made the appeal at the Vatican before boarding a plane to the United Arab Emirates, which has been Saudi Arabia’s main ally in its war in Yemen – a way to avoid embarrassing his hosts with a public call while in the region.

The United Nations is trying to implement a truce and troop withdrawal deal in the main Yemeni port of Hodeidah that was agreed in December talks as a trust-building step that could pave the way for political negotiations to end the conflict.

‘The cry of these children and their parents rise up to God,’ Pope Francis told tens of thousands of people in St. Peter’s Square. 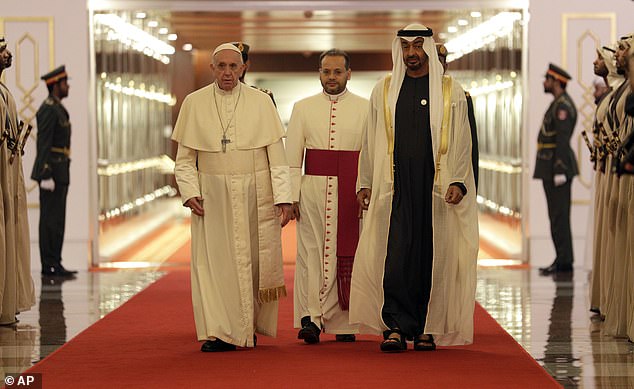 During the pope’s 48 hours in the UAE he is expected to raise the issue of the Yemen war, but Vatican officials said it is not clear whether this will be addressed in public or private 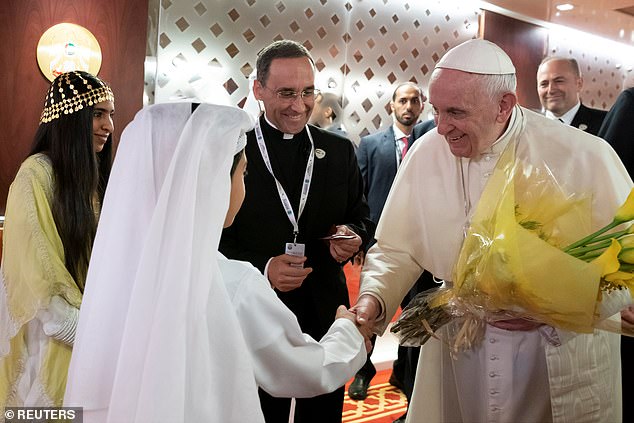 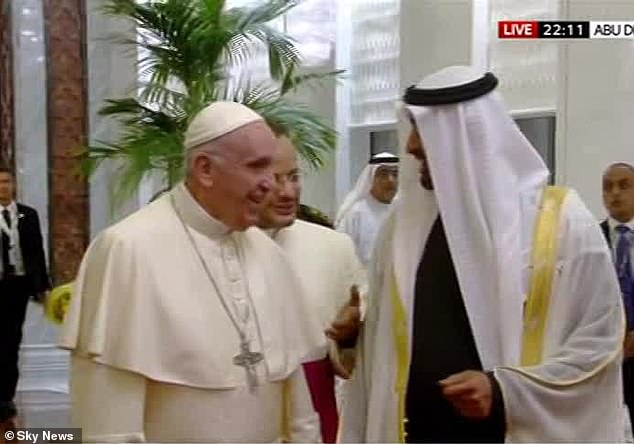 Just hours before his arrival Pope Francis condemned the war in Yemen, where his hosts today – the United Arab Emirates – has a leading military role

‘Let us pray strongly because they are children who are hungry, who are thirsty, they don’t have medicine and they are in danger of death,’ he said before boarding his flight to the UAE capital Abu Dhabi.

Vatican officials have said it is not clear whether Pope Francis will address the sensitive subject in public or private during his visit to Abu Dhabi, which is aimed at promoting interfaith dialogue.

The pope will spend less than 48 hours in the UAE, where he will meet Muslim leaders and celebrate an outdoor mass for some 120,000 Catholics.

He has said the trip is an opportunity to write ‘a new page in the history of relations between religions’.

The UAE, which named 2019 its Year of Tolerance, says the visit reflects its history as a ‘cradle of diversity’.

But it faces criticism from human rights groups for jailing activists, including Ahmed Mansoor, an Emirati who is serving a 10-year sentence for criticising the government on social media. 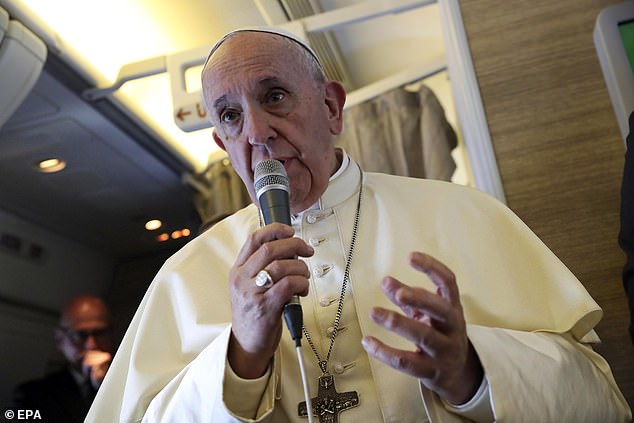 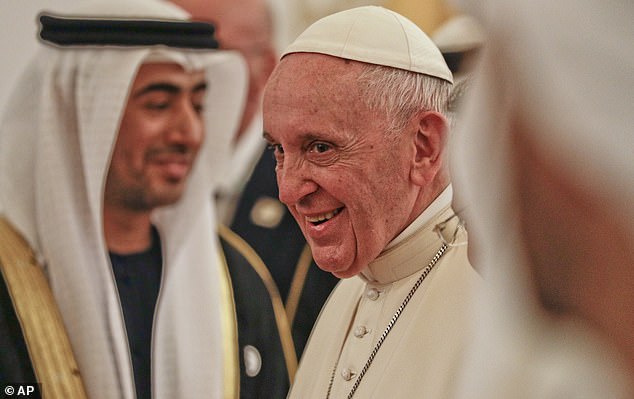 Pope Francis smiling upon his arrival at the Abu Dhabi airport today. He becomes the first pontiff to visit the birthplace of Islam 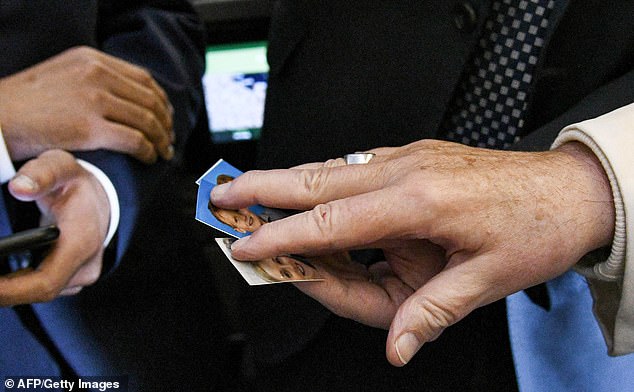 ‘We are calling on Pope Francis to raise the issue of their incarceration with his hosts, and urge their immediate and unconditional release,’ Amnesty International said in a statement on Saturday.

UAE authorities did not immediately reply to a request for comment.

Priests and diplomats describe the UAE as one of the most open environments in the Gulf for Christian worship. But like its neighbours, the UAE does not allow dissent or criticism of its leadership.

The UAE is home to around half of an estimated two million expatriate Catholics living in the peninsula, a territory which also hosts Islam’s holiest sites in Saudi Arabia and is the birthplace of the religion.

Most are Filipino and Indian, many of whom have left behind families for work and can face precarious labour conditions, which human rights groups regularly denounce.

The prince is an ally of Saudi Arabia’s Crown Prince Mohammed bin Salman, who has reached out to Christian representatives abroad as part of attempts to open up the conservative kingdom.

All Gulf states except Saudi Arabia allow Christian worship in churches or church compounds and other premises with special licences.

In Saudi Arabia, non-Muslims pray in secret gatherings in private homes and embassies. 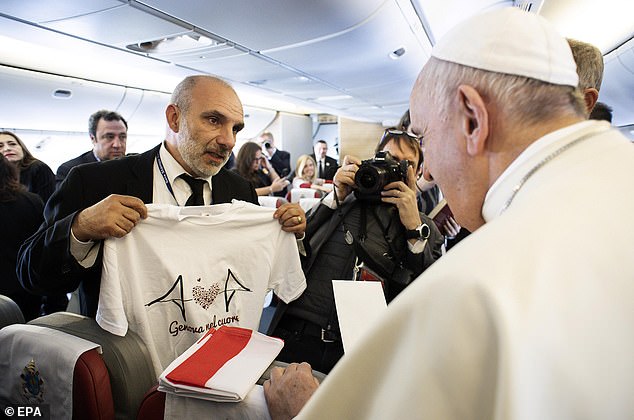 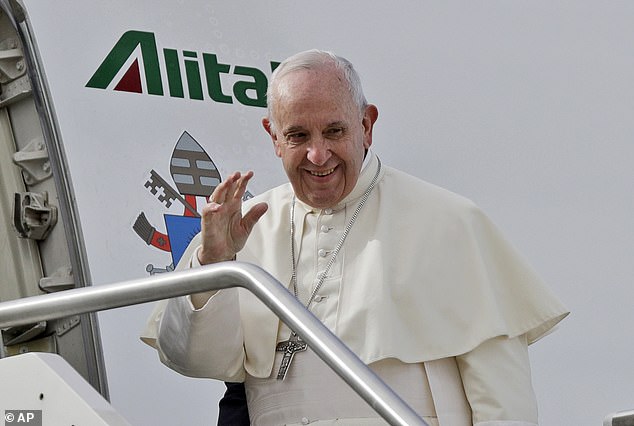 The meeting will be held in Abu Dhabi’s Sheikh Zayed Grand Mosque.

Francis has already visited half a dozen mainly Muslim nations during his reign, using the trips to call for inter-religious dialogue and to condemn the use of violence in the name of God.

The UAE ambassador to Washington, Yousef Al Otaiba, wrote in an op-ed in Politico magazine on Sunday that the pontiff’s visit sends a signal of co-existence and respect in the face of the ‘menace of extremism’ across the Middle East.

The Emirates’ support for Saudi Arabia’s war in Yemen, which has caused the world’s worst humanitarian crisis, and the UAE’s problematic record on human rights and labour violations at home are likely to get a pass – at least in public.

Francis is travelling to Abu Dhabi to participate in a conference on inter-religious dialogue sponsored by the Emirates-based Muslim Council of Elders, an initiative that seeks to counter religious fanaticism by promoting a moderate brand of Islam.

Francis and Sheikh Ahmed el-Tayeb, the grand imam of Egypt’s Al-Azhar, are to address the Human Fraternity Meeting tomorrow that has drawn not only Christian and Muslim representatives but hundreds of Jewish, Hindu, Buddhist and other Christian faith leaders. 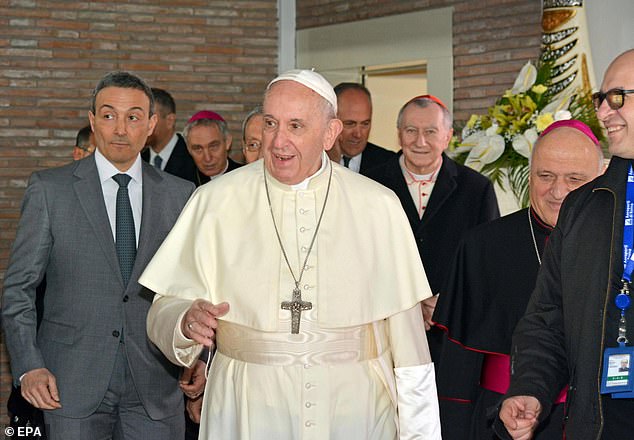 It is the brainchild of el-Tayeb, who also met Francis at the airport and sits in the revered 1,000-year-old seat of Sunni Islam learning that trains clerics and scholars from around the world.

Francis’s other main initiative in Abu Dhabi is a giant Mass on Tuesday in the city’s main sports arena that is expected to draw some 135,000 people in what some have called the largest show of public Christian worship on the Arabian Peninsula.

It will be the fifth meeting between Francis and Sheikh el-Tayeb, evidence that Al-Azhar’s freeze in relations with the Holy See sparked by Pope Benedict XVI’s 2006 comments linking Islam to violence has thoroughly thawed.

In a video message to the Emirates on the eve of his trip, Francis paid homage to his ‘friend and dear brother’ el-Tayeb and praised his courage in calling the meeting to assert that ‘God unites and doesn’t divide.’

‘I am pleased with this meeting offered by the Lord to write, on your dear land, a new page in the history of relations among religions and confirm that we are brothers despite our differences,’ Francis said.

In a statement yesterday, Al-Azhar described the upcoming meeting as ‘historic’ and praised the ‘deeply fraternal relationship’ between its imam and the pope, which it said even includes birthday greetings.