Pope Francis takes boy, 12 who has Down’s Syndrome in Popemobile

This is the heartwarming moment a boy who ‘wished to be kissed by the man in white’ rode with the pope in his Popemobile in Vatican City.

Peter Lombardi, 12, who has Down’s syndrome, was diagnosed with leukaemia in 2015 and asked to be blessed by Pope Francis.

The young boy has since recovered from cancer and he and his family were on pilgrimage to the Vatican at the time Peter met the pope.

Peter, from Columbus in Ohio, was also treated to a balloon hat from the Head of the Catholic Church during his visit on Wednesday.

His mother, Brenda, told Inside Edition: ‘Oh my gosh, he spent the most time with the pope of anyone today.’

She added: ‘He just rode with it. That’s what Pete does.’

Peter Lombardi, 12 was kissed by Pope Francis during a trip to Vatican City with his family after he had asked to be ‘kissed by that man in white’

Peter’s family had tickets to see the pope in Philadelphia when he visited the US however the young boy was too ill so they couldn’t attend.

While he lay in hospital watching the papal service on television he said ‘I want to be kissed by that man in white’.

Two years later when the family were in Italy they hired a tour guide they and told him about Peter’s cancer and his wish to meet Pope Francis. 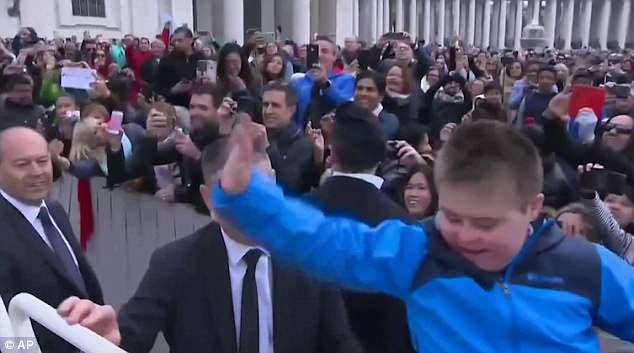 Their guide, Mountain Butorac, had a friend named Joanna who was married to a member of the Pontifical Swiss Guard, who look after the pope.

Joanna was able to get the Lombardis into the front row for Wednesday’s weekly general audience.

Pope Francis noticed Brenda shouting and holding her son and beckoned them over to him. 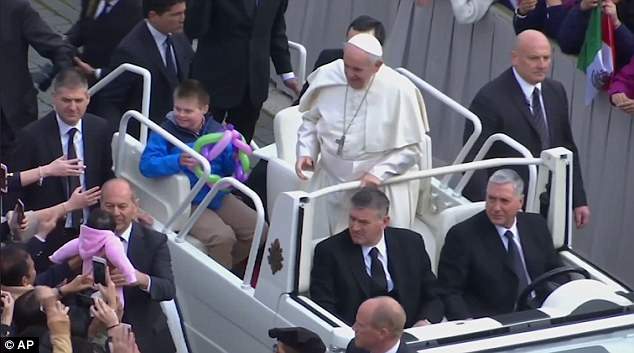 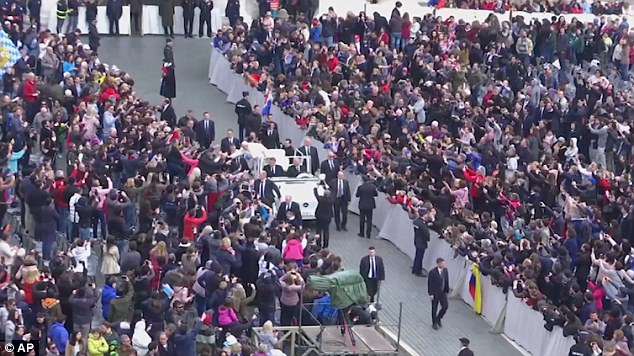 He then kissed Peter on the forehead and ruffled his hair before the boy then tried to clamber over the Popemobile’s railings.

The pope then asked his guards to bring Peter around so that he could ride alongside him.

Brenda said: ‘I just stood there in shock and then I started crying.’