Protesters in Portland, Oregon have taken to the streets for the 75th night running to demand an end to police brutality, as Donald Trump declared that the city is ‘out of control’ and said the National Guard should be deployed.

About 150 people had gathered at Alberta Park shortly before the scheduled 9pm march.

Some people were handing out pizza, water and snacks. Others offered homemade shields.

As night fell chants of ‘Black Lives Matter’ rose in to the air.

‘If you’re not here for Black Lives Matter, you’re in the wrong place,’ one speaker told the gathering.

Protesters then set off to march towards the Portland Police Bureau’s North Precinct, where previous protests have turned destructive. 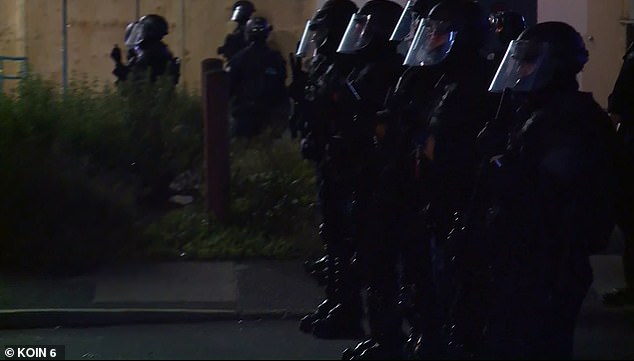 Crowds squared off with riot police, standing to protect the city’s North Precinct 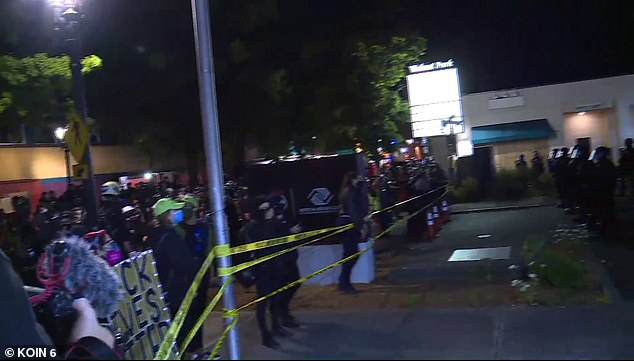 Protesters were kept back from the precinct by crime scene tape, and a row of riot police 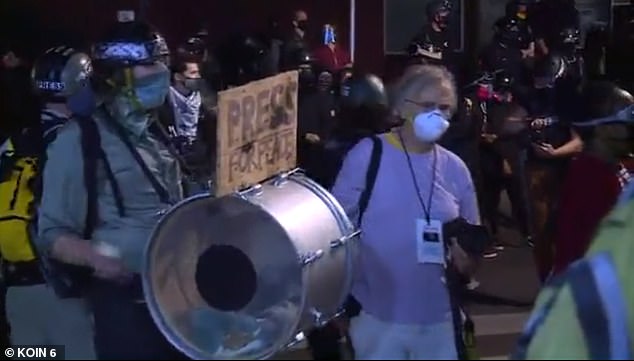 The group, many dressed all in black, chanted: ‘No good cops in a racist system.’

When they arrived at North Precinct, shortly after 9pm, Oregon Live reported that they were met with about a dozen armored officers.

Some held batons, while others carried crowd-control weapons, the site said.

At 10:23pm, police warned protesters that acts of vandalism, lighting fires or throwing objects could be met with arrest or use of force, including tear gas. At one point, police ordered an individual in the crowd to stop shining a strobe light at officers.

Officials in the city of 650,000 have rejected his offer of National Guard troops, and said that federal forces sent in earlier this year to protect federal buildings overstepped the mark, and worsened tensions.

Protests on Friday, Saturday and Sunday night descended into violence, with a small crowd squaring off with riot police.

Twenty five people were arrested during Saturday and Sunday nights – among them Demetria Hester, a prominent activist who leads Mothers United for Black Lives Matter.

She is also a survivor of the May 2017 Portland train attack, when white supremacist Jeremy Christian murdered two people.

She testified against him in his trial. 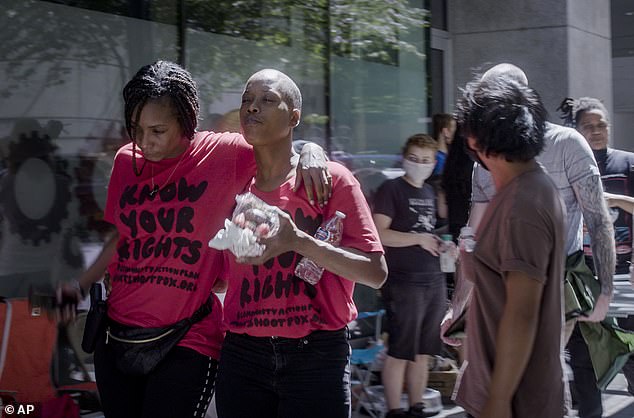 Hester was accused of disorderly conduct and interfering with a peace officer, both misdemeanors.

She was released from custody Monday afternoon, and Brent Weisberg, spokesman for the Multnomah County District Attorney’s Office, said the DA had declined prosecution and that the court will dismiss the charges.

‘The prosecution decline decision was in the interest of justice upon reviewing the police reports in this matter,’ Weisberg said.

Portland police said on Friday night that they were pelted with rocks and chunks of cement, and their car tires were vandalized by pool noodles filled with nails.