Post Office network ‘is close to collapse’ with 2,500 branches set to close or downsize

Post Office network ‘is close to collapse’ with 2,500 branches set to close or downsize in next 12 months as swingeing Government cuts bite

The Post Office is ‘beyond tipping point’ as cuts in Government funding threaten its future, it was claimed last night.

MPs will tomorrow be told that the network is close to collapse.

Up to 2,500 small post offices will close or downsize in the next 12 months because of financial hardship, says the National Federation of Sub-Postmasters.

Up to 2,500 small post offices will close or downsize in the next 12 months because of financial hardship, says the National Federation of Sub-Postmasters

Most close because the sub-postmaster, the private business people running smaller branches, can no longer make a living.

The association is calling on the Government to extend the subsidy to the post office network beyond 2021 to protect village branches.

The NFSP claim that without the subsidy the network would not be able to survive and 3,000 ‘community’ branches, typically in rural areas, will be at risk.Banks axed more than 750 of their branches last year, leaving post offices as a vital service, especially for older customers in rural communities. 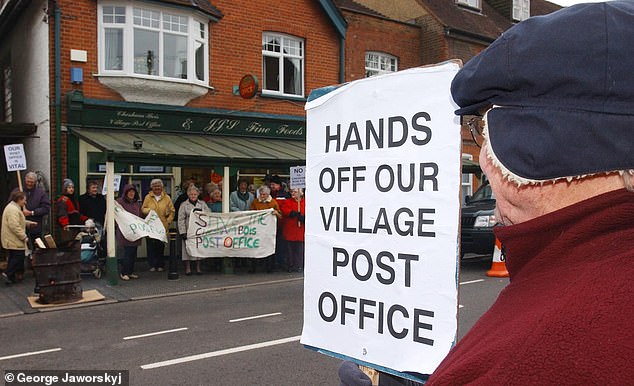 Most close because the sub-postmaster, the private business people running smaller branches, can no longer make a living. Pictured, villagers protesting against the closure of Chesham Bois post office

A lifeline for the village 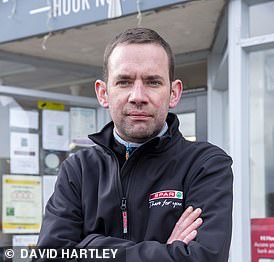 Joe Williams, 38, said: ‘We make around £14,000 a year from Post Office commission, but we have to pay our staff ourselves’

Joe Williams opened a post office counter three years ago because villagers had no local access to vital services.

But even though his shop in Hook Norton, Oxfordshire, is thriving he does not make a profit from the new arm to his business.

The last bank in the village shut 20 years ago, and the old post office closed in 2015. Now, as well as buying food in The Village Shop, locals pay in cheques there and withdraw cash and pensions.

The vast majority of post offices, about 98 per cent, are operated by franchise partners or sub-postmasters, who are independent business people. Only Crown post offices are directly managed by the Post Office.

The NFSP said: ‘The viability of sub post offices and the morale of sub-postmasters has been eroded to the extent that the network’s resilience is extremely limited. We believe a tipping point has been passed and the consequences of this are now being realised.

‘Sub-postmasters are resigning in high numbers because it is increasingly difficult to make a decent living. The closure of 2,500 post offices in a year would be a catastrophic loss to communities.’

The warning comes in written evidence to the Commons business, energy and industrial committee, which is meeting tomorrow for a hearing into the future of the post office network.

The NFSP will say its 8,000 members feel ‘disenfranchised’ and ‘marginalised’ by the Post Office, the Government and Royal Mail – and ‘relegated to the bottom of the food chain’.

Their profits have been squeezed by the move online. They claim they are seen by the Post Office as a ‘cost element to be reduced’ and have called on more banking and Government services to be brought back to post offices

Calum Greenhow, chief executive of the NFSP, will be questioned by MPs during the business select committee session tomorrow. MPs will also hear from the Citizens’ Advice, WH Smith and the Association of Convenience Stores.

A survey by the NFSP found that 22 per cent are planning to close, hand on their business, or downsize over the next year. There are about 11,500 post offices in the UK, almost half the number of 30 years ago.