‘This week I heard him literally say I don’t think we should legalize marijuana,’ Booker said of Biden. ‘I thought you might have been high when you said it,’ he added, turning to the former veep, and garnering laughs from the audience.

Booker explained that marijuana in the United States is ‘already legal for privileged people,’ but the war on drugs still incarcerates Americans who are black and brown. 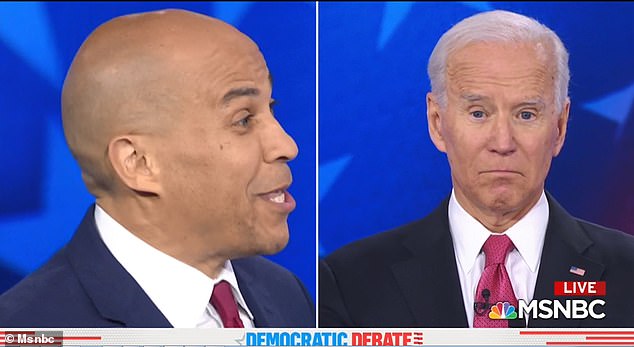 ‘I thought you might have been high when you said it,’ Cory Booker (left) said to Joe Biden (right) during Wednesday night’s Democratic primary debate in Atlanta, Georgia 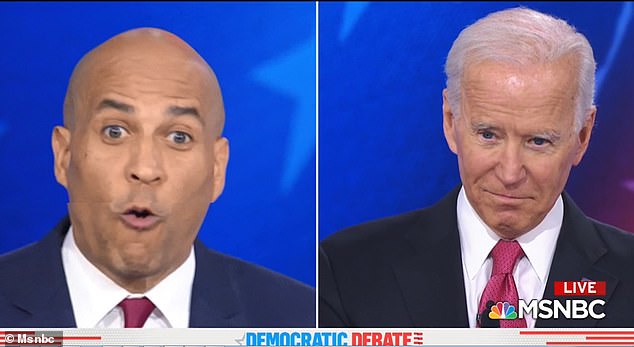 The former vice president responded that he supported marijuana decriminalization, he also talked about his support in the black community 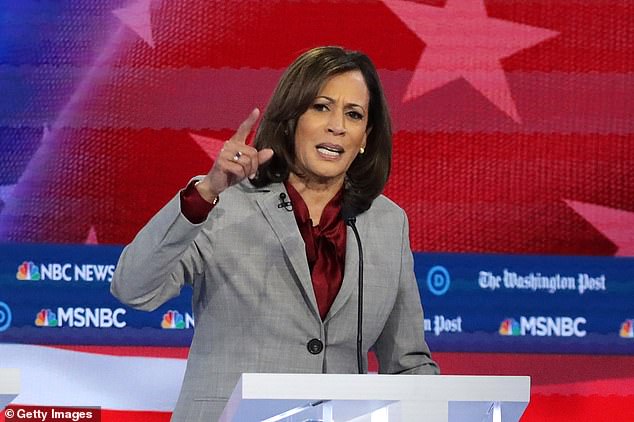 Joe Biden commented that he had the support of the ‘only African-American woman who’s been elected to the Senate,’ which caused Sen. Kamala Harris (pictured) to pipe up and say the other one is right here

‘And anyone who has a record should be let out of jail, their record expunged, be completely zeroed out,’ he continued. ‘But I do think it makes sense based on data that we should study what the long-term effects are for the use of marijuana.’

Booker had brought up pot in the context of the Democrats finding a nominee who will, as president, be an advocate for black voters.

‘Nobody on this stage should need a focus group to hear from African-American voters. Black voters are pissed off and they’re worried. They’re pissed off because the only time our problems are paid attention to is when people are looking for a vote,’ said Booker, who is black. ‘We don’t want to see people miss the opportunity and lose because we are nominating someone who isn’t trusted, doesn’t have an authentic connection.’

Booker’s comments seemed to be geared toward South Bend Mayor Pete Buttigieg, who is surging in Iowa, but has barely any black voter support, and whose campaign has made missteps in courting the demographic as of late.

Instead Booker pivoted to Biden, long considered the frontrunner of the large Democratic pack.

‘I have a lot of respect for the vice president,’ Booker said. ‘He was sworn me into my office and he’s a hero.’

The New Jersey senator then called Biden high – a high-light of the debate, which was eclipsed by hours of impeachment inquiry testimony all day Wednesday.

Biden, who served as President Obama’s vice president, said he remained part of that Obama coalition.

‘I come out of a black community in terms of my support,’ Biden boasted.

The ex-veep said he had more people in the black community have come out in support of him because they know him well.

‘Three former chairs of the black caucus, the only African-American woman who’s been elected to the Senate,’ Biden said.

At that moment, Sen. Kamala Harris piped up.

Biden had been referring to former Sen. Carol Moseley Braun.

‘I said the first African-American woman,’ Biden said, but of course he didn’t.

Booker had a final point to make on pot.

In February, Harris admitted that she smoked pot in college and ‘did inhale.’