The experimental coronavirus drug being given to Donald Trump is to be rolled out to 30 or 40 UK hospitals this week as it is deemed ‘very potent’ by UK scientists.

The US president was given the artificial antibody treatment at the White House on Friday after being diagnosed with Covid-19.

Professor Horby, who specialises in emerging infectious diseases at Oxford and is co-chief investigator of the Recovery trial, said ‘about three hospitals in the north’ were the first to start using the drug, adding that it is being rolled out to ‘another 30 to 40 hospitals’ in the UK next week.

He said: ‘The class of drugs, these artificial antibodies, have been around for quite a while now, and they’ve been extensively used in inflammatory conditions and cancers, and they’re pretty safe and well understood, and so the technology is something that I think we have confidence in.

‘This particular drug has probably been given to, I would think now, four or five hundred patients, mild or severe patients in different trials, and so far there’s been no worrying safety signals.

‘In the laboratory, in cell cultures, it has a very strong effect against the virus, and there have been studies in artificial animals where it also shows benefits.

‘So probably of the drugs that are available, it’s one of the most promising.’

Professor Horby said a single dose of the treatment provides ‘prolonged protection’ for ‘a month to six weeks’, making it ‘quite attractive for the older population’. 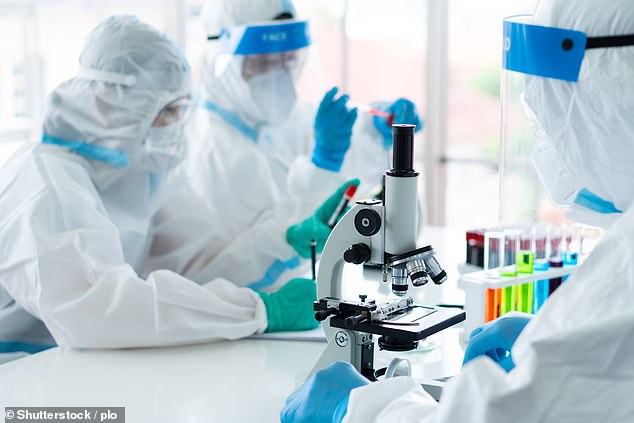 UK trials saw the drug first tested on genetically modified mice before being tried on 275 people, 40 per cent of whom were classified as obese. Stock image

The antibody cocktail works by binding to a protein on the surface of the virus, stopping it from attaching to cells and replicating, while allowing the immune system to attack the virus.

REGN-COV2 is made up of two monoclonal antibodies (REGN10933 and REGN10987), which are man-made to act like human antibodies in the immune system.

It was first tested on mice which were genetically modified to have a human immune system, before being tested on 275 people, of whom 40 per cent were classed as obese.

Details of the UK trial were announced on September 14, when Prof Horby said he expected it would also be tested on ‘at least 2,000’ randomly allocated patients in 174 hospitals. 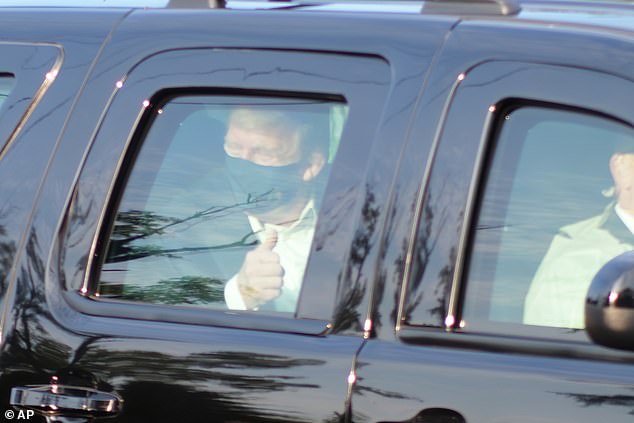 President Donald Trump drives past supporters outside Walter Reed National Military Medical Center in Maryland, where he was treated with REGN-COV2. Sunday, October 4

Nick Cammack, who is leading Covid-19 therapeutics work for Wellcome, described monoclonal antibodies as among ‘the most exciting’ treatments for Covid-19 because they are specific to the disease, but also ‘traditionally the most expensive’.

He said: ‘Large-scale randomised controlled studies like Recovery give us the best understanding of whether drugs like REGN-COV2 are safe and effective against Covid-19, but we must ensure that any successful treatment is available to everyone who needs it globally.’

Regeneron has linked up with the pharmaceutical giant Roche to increase the global supply of REGN-COV2 if it proves effective.

Mr Trump has been given the drug alongside Remdesivir, an antiviral treatment which has been shown to help some coronavirus patients recover faster, as well as zinc, vitamin D, an antacid called famotidine, melatonin and aspirin.