A father in China has donated his own skin repeatedly to save his severely burnt daughter because he couldn’t the skin grafts needed for her operations.

Li Zhifeng, a farmer, has given his scalp as well as the skin from his left arm and entire left leg for his child.

His daughter, 17-year-old Li Chenxi, was seriously injured during a gas explosion in October and sustained two-to-three-degree burns on 80 per cent of her body.

Li Zhifeng (pictured) said: ‘As long as my child needs it, I would donate (my skin) anytime’ 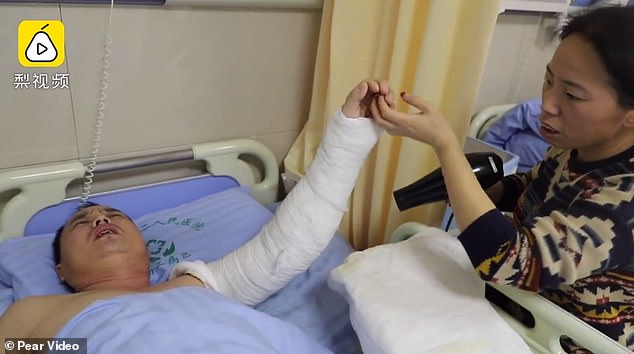 Although the girl was taken to the hospital in time, Mr Li was told by the doctors that she was in critical condition and it would cost him more than 300,000 yuan (£34,453) to buy new pieces of skin for emergency transplants.

Mr Li, from central China’s Henan province, couldn’t afford the bill, which was astronomical for him. Therefore, he told the doctors to take skin from him.

Mr Li told the press that life had just begun for his daughter and he would do whatever he could to save her – no matter how painful it is.

He said to Pear Video: ‘As long as my child needs it, I would donate it anytime.’

His wife told reporters that in order to provide enough skin for his daughter, Mr Li would undergo one operation, wait for the skin to grow back before donating it again.

‘He has already had part of his scalp removed six or seven times,’ Ms Zheng told China News in a video report.

On October 20, he had skin from his entire left leg taken. 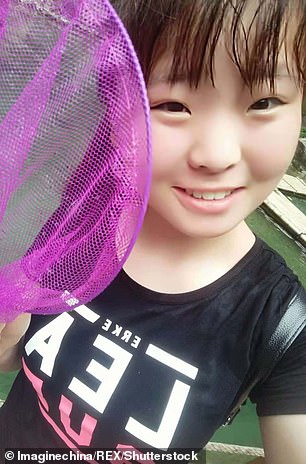 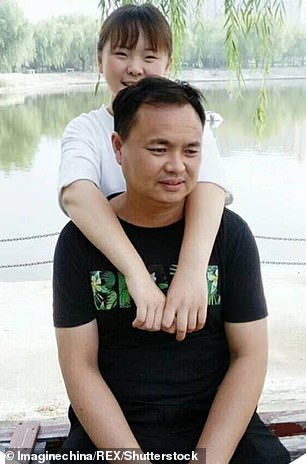 Mr Li (pictured with his daughter Chenxi, right) said he would save his child no matter what. Schoolgirl Chenxi (left), 17, was severely burnt in a gas explosion at home on October 3

In order to pay for the surgical procedures and hospital care, Mr Li and his wife, Zheng Guohong, have pawned their house and borrowed money from relatives.

So far, their medical bills have amounted to more than 1.6 million yuan (£183,400) and the number is still growing.

Chenxi has undergone 17 skin grafts in the past two months. Surgeons have used skin from herself and her father in the surgical procedures.

In order not to worry Chenxi, who has been under intensive care, Mr Li told his wife to hide the fact that he had been donating his skin from their daughter.

He told his wife to tell the girl that he had been away for work in another city; while in reality, he was recovering in a hospital ward just two storeys underneath his daughter’s.

The man said as long as he was alive, there would be hope for his daughter.

His wife told reporter emotionally: ‘I don’t want either of them to go through pain, but this is all for Niu Niu (their daughter’s nickname).’

She said she had suggested the doctors take skin from her instead, but her husband insisted to go under the knife. 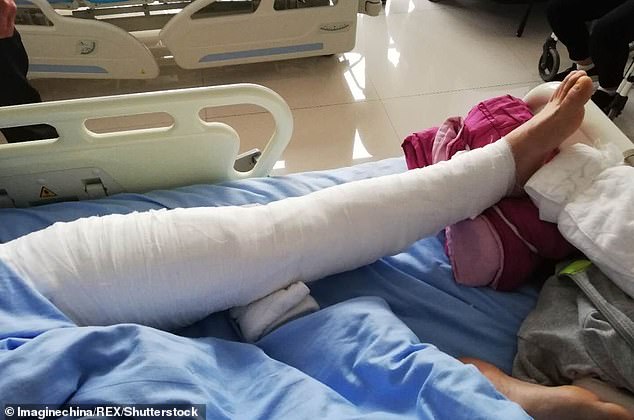 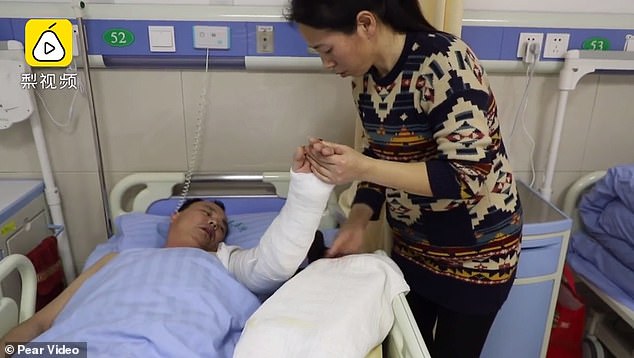 The Li family live in the city of Xinjiang. Apart from Chenxi, Mr Li and his wife also have a son, who is 11 years old.

Chenxi was burnt on October 3 in an explosion caused by a gas leak at home. She and her younger brother were writing their homework and their parents were doing farm work in the field.

Mr Li said he rushed home as soon as he got a phone call from a neighbour telling him there was a fire in his house. He said when he got home, he saw his daughter lying next to the sink. She was said to be so burnt that the skin on her arm had been separated from the flesh and all of her clothes had gone.

Chenxi was immediately taken to the No. 2 People’s Hospital in Xinxiang.

While the girl has stayed strong throughout the treatment, she remains unaware of what her father has done for her.

She recorded a film of herself from her intensive care unit on October 20 telling his father that she would try to recover soon – not knowing her father had donated the skin from his left leg on the same day. 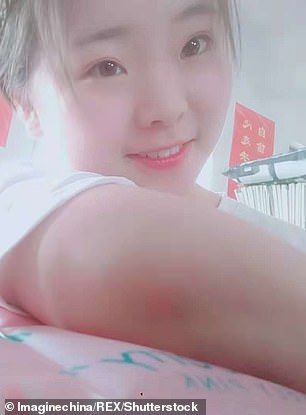 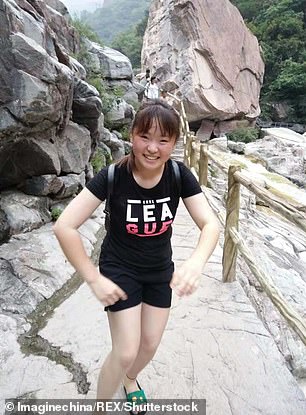 Chenxi has undergone 17 operations since she was injured in the house fire on October 3. ‘I just want her to recover as soon as possible,’ the 17-year-old’s father told China News

In the video, she asked her father to take her out for a walk when she could leave the unit and told him that ‘I can’t love you enough’.

Mr Li said his daughter was a strong-willed girl and before she got injured, she brought so much laughter to the family.

‘I just want her to recover as soon as possible,’ the man told China News.

In order to raise the funds, Mr Li chose to leave the hospital on December 4 to borrow money from relatives and friends – despite the fact that he was still wounded.

He said the hospital was pressing them to pay up the bills, and he feared that his daughter’s treatment would be delayed otherwise.

His wife told China News that the family had received about 100,000 yuan (£11,472) donations from the public and they were grateful for the kind strangers.

Chenxi is recovering well, according to the doctors.