A 6.8-magnitude earthquake has struck a South Pacific island chain north of New Zealand, in the second powerful quake there in days.

Today’s quake struck 100 miles south-east of Raoul Island, the only inhabited island in the Kermadec chain.

The U.S. Geological Survey said it had a shallow depth of just over six miles and there were no immediate reports of casualties.

A 6.8-magnitude earthquake has struck a South Pacific island chain north of New Zealand , in the second powerful quake there in days

Reassuring the public, New Zealand’s civil defence ministry said there was no danger of a tsunami hitting the country.

Australia’s Bureau of Meterology also said there was no tsunami threat to Australia from today’s earthquake.

It comes just three days after the same arc of Kermadec Islands was struck by a 7.4-magnitude quake on Sunday.

On that occasion, New Zealand initially responded with a tsunami warning, predicting a ‘threat to beach, harbour, estuary and small boat activities’.

The warning was later lifted. 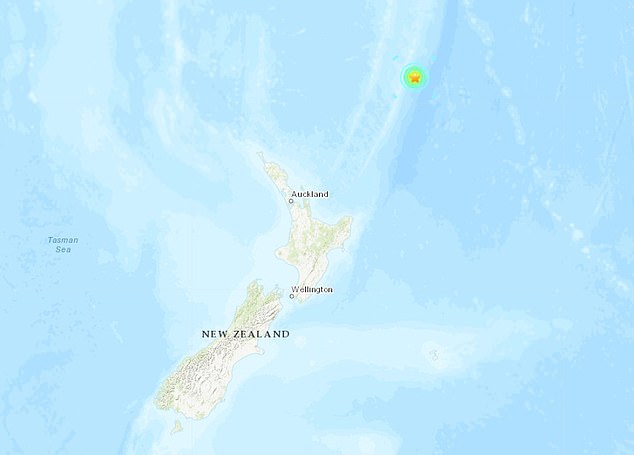 A map showing where today’s earthquake struck, in an island chain north-east of New Zealand. Authorities in Australia and New Zealand have reassured the public there is no tsunami risk

The Kermadec Islands, a volcanic archipelago and dependency of New Zealand, are prone to earthquakes.

There is no permanent population but some New Zealand conservation and meteorology workers are based at a station on Raoul Island.

The Kermadecs are part of the Pacific Ring of Fire, a hotbed of volcanic and earthquake activity at the intersection of several tectonic plates.

Raoul Island is almost 700 miles away from the tip of New Zealand’s North Island.