Firefighting efforts continued Tuesday morning on the USS Bonhomme Richard as the three-alarm fire raging aboard the battleship docked in California continued to burn for a third consecutive day.

More than 160 people had been aboard the USS Bonhomme at the San Diego Naval Base when the fire started in the lower cargo hold of the ship at 8:30am Sunday, which later triggered an internal explosion.

Federal and Navy firefighting units are said to be doing ‘everything they can’ to save the ship more than 48 hours after the conflagration erupted on its lower decks, sending temperatures as high as 1,000 degrees in parts of the vessel and leaving it pitching in the water.

In total, officials have reported that so far 57 people – 34 sailors and 23 civilians – have been injured in the blaze. The injuries were not life-threatening, and included heat exhaustion and smoke inhalation, Rear Admiral Phillip Sobeck said Monday. 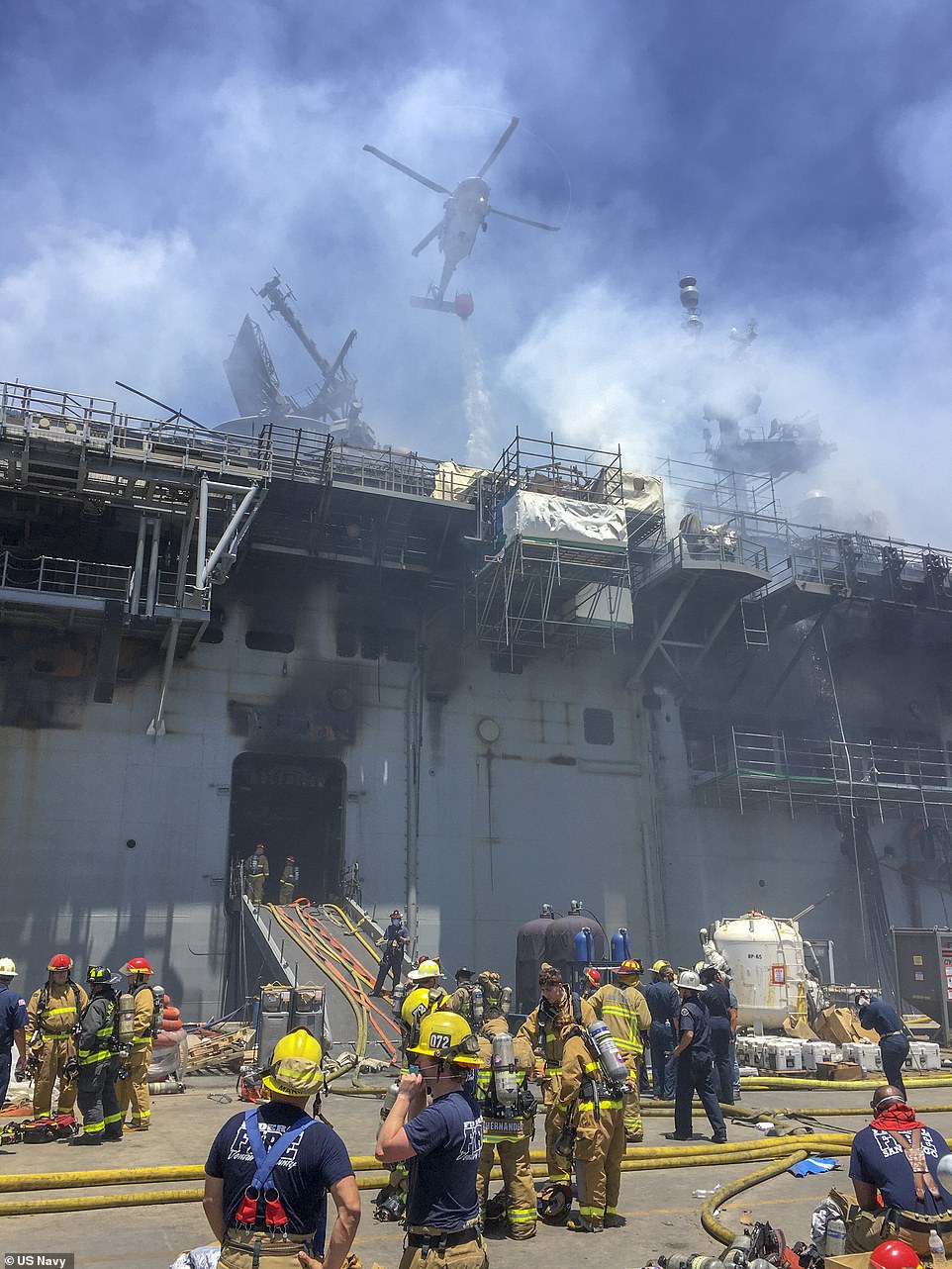 Federal and Navy firefighting units are said to be doing ‘everything they can’ to save the ship more than 48 hours after a conflagration erupted on its lower decks, sending temperatures as high as 1,000 degrees in parts of the vessel 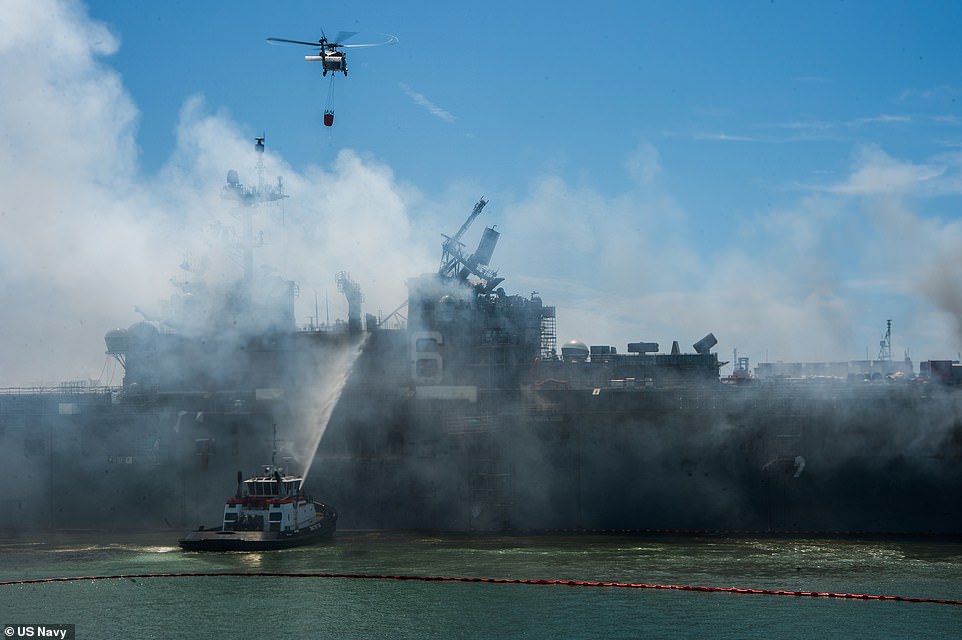 An MH-60S Seahawk helicopter from the ‘Merlins’ of Helicopter Sea Combat Squadron (HSC) 3, provides aerial firefighting support alongside Sailors and civilian fire crews on the ground to fight the fire aboard amphibious assault ship 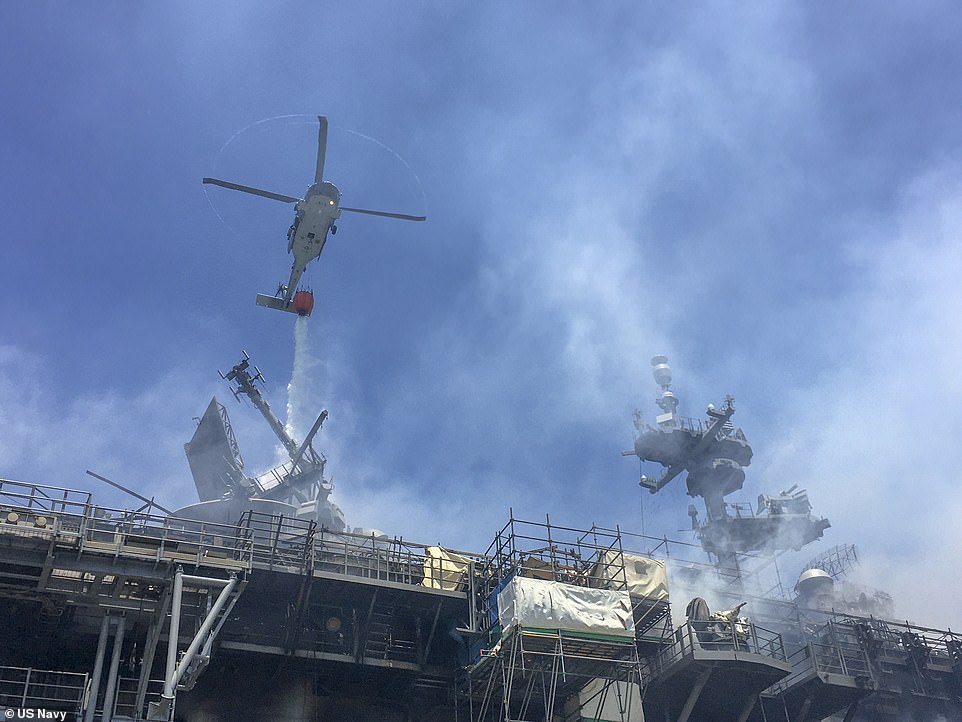 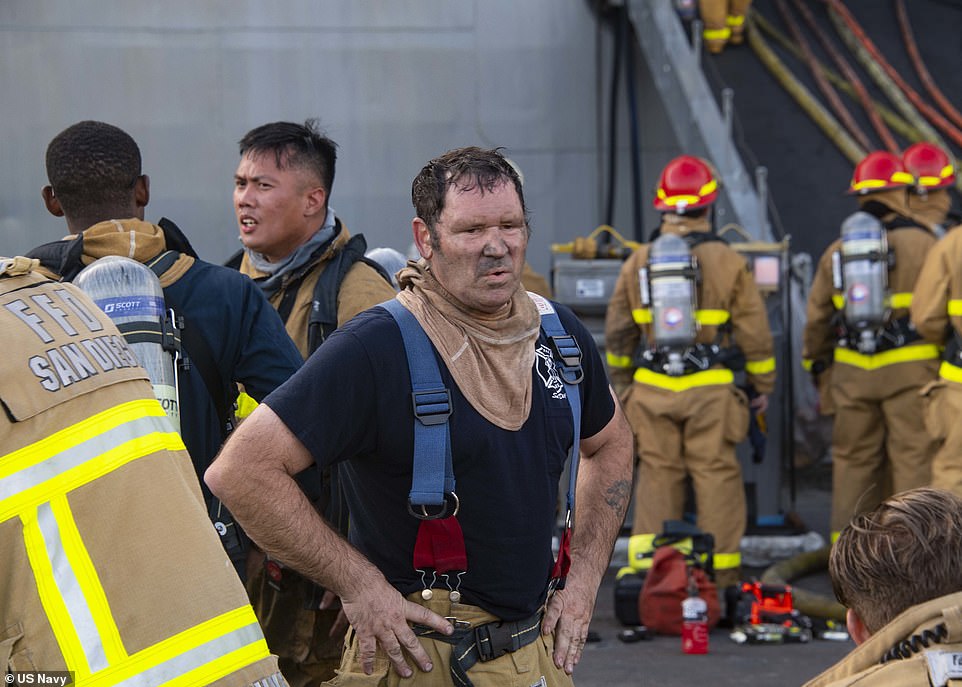 According to Sobeck, officials believe the fire was started by drywall supplies in a storage area in the lower half of the ship.

The admiral previously revealed that he believed the inferno was being fueled by paper, cloth, rags or other standard materials, and therefore he wasn’t concerned about the blaze sending toxic fumes into the air.

However, adding to the danger of the inferno, the fire is burning just two decks above from a section of the ship where a million gallons of fuel is being stored.

In a press conference Monday, Sobeck, said the proximity of the flames to the fuel is of concern, however he voiced confidence that firefighters would be able to prevent the blaze from reaching that storage area.

The fire has brought down the amphibious assault ship’s forward mast and caused other damage to the ship’s superstructure that rises above its flight deck.

‘There is a tremendous amount of heat underneath and that’s where it’s – it’s flashing up – also forward, closer to the bow again there’s a heat source and we’re trying to get to that as well,’ Sobeck said Monday.

Asked if he believes the ship could be saved, Sobeck said: ‘I feel absolutely hopeful because we have sailors giving it their all.’

The Admiral also acknowledged that the ship’s Halon fire suppression system – which could have extinguished the initial fire – was not activated because it was undergoing maintenance.

‘We again augment that with firefighting elements from the pier and the shipyard,’ he told reporters.

The blaze began around 8:30am on Sunday. After 90 minutes, authorities decided to remove all firefighters from the vessel for safety reasons and battle the fire remotely. 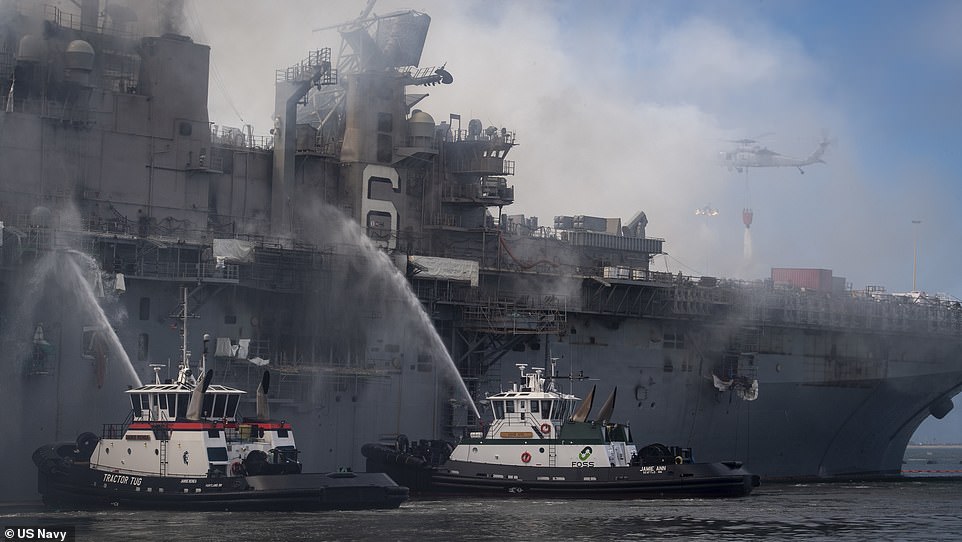 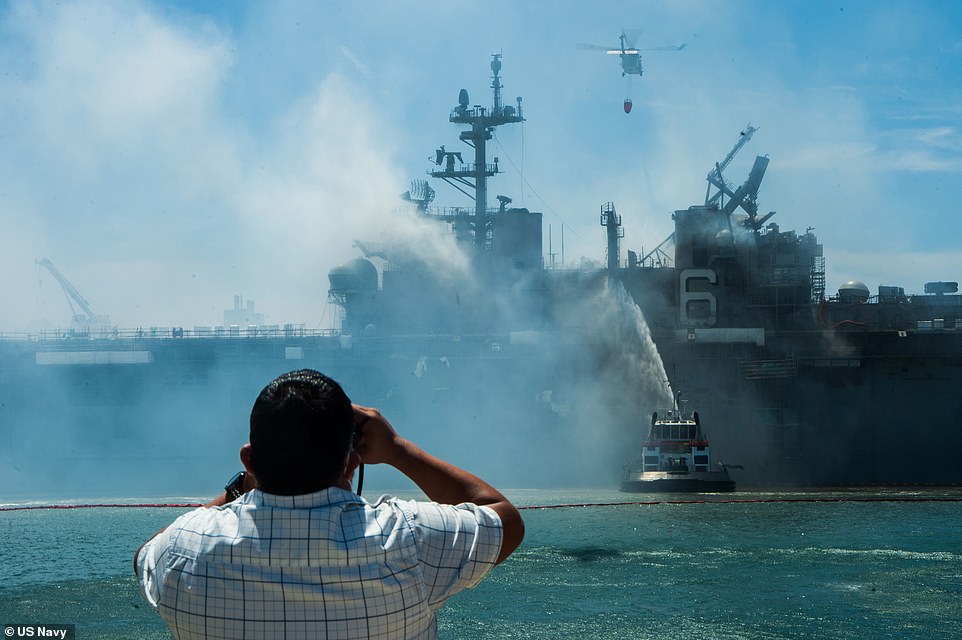 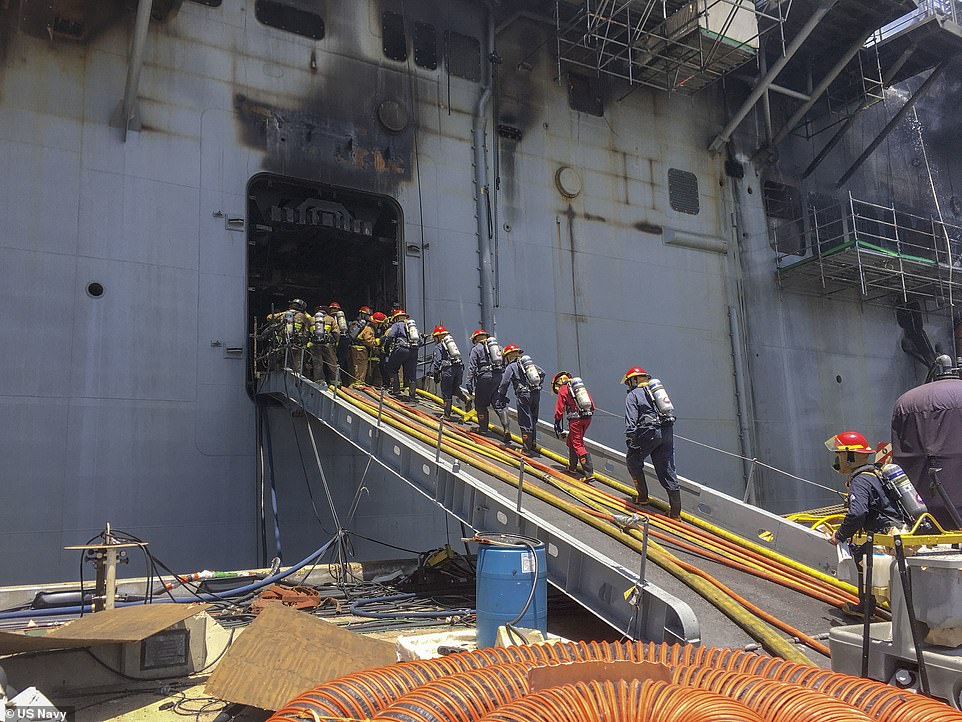 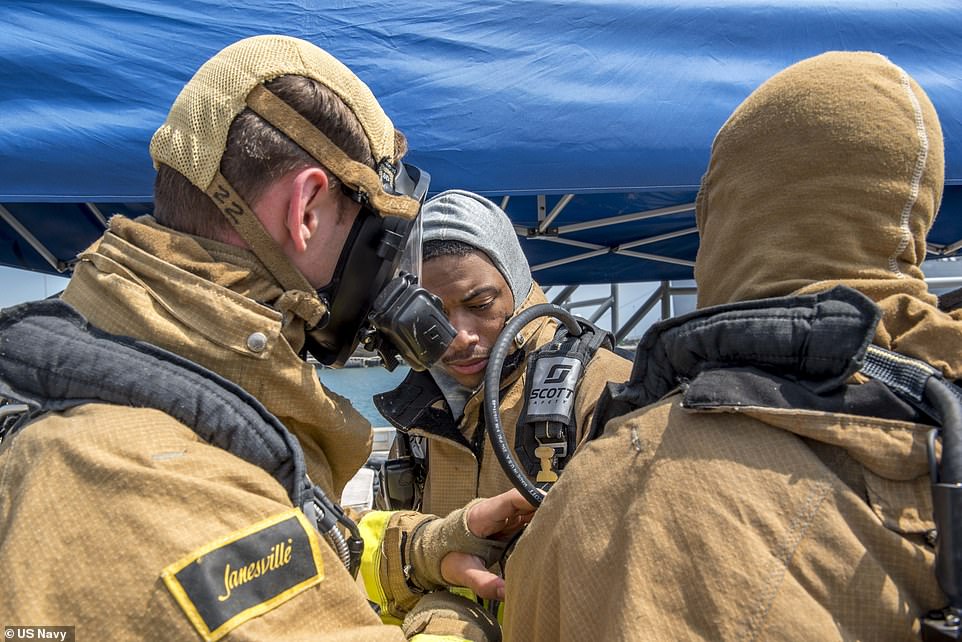 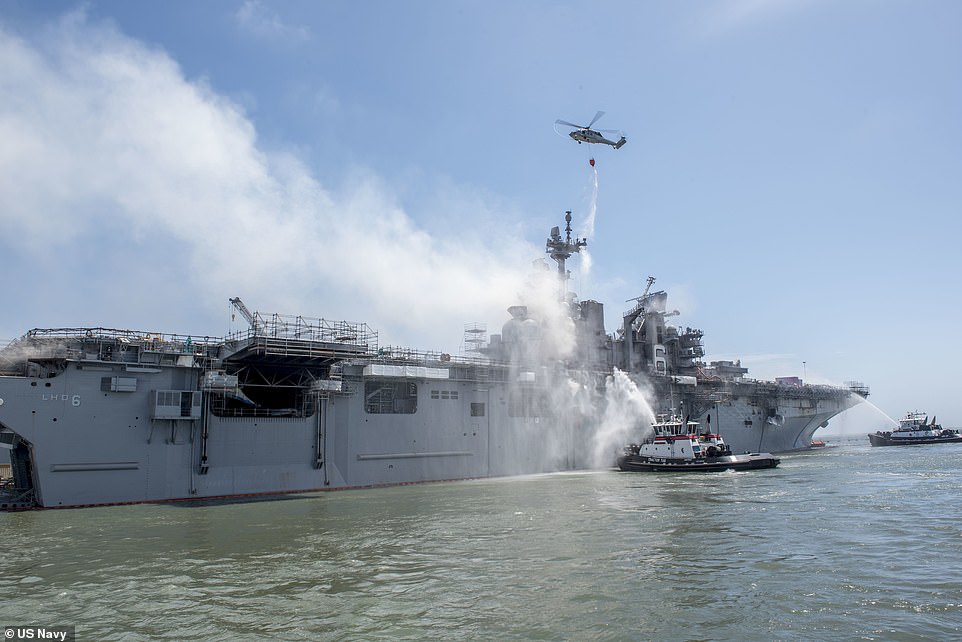 Teams of sailors rotating on 15-minute firefighting shift patterns have been pouring water onto the ship from the pier and from tugboats tirelessly since Sunday morning. Two Navy helicopters have also dropped more than 415 buckets of water on top of the burning ship in a bid to contain the fire.

Around two hours after the fire began, an explosion of unknown origin shook the vessel.

‘None of the (SDFRD) firefighters were on board the ship when the explosion happened, but the blast threw several firefighters off their feet,’ the San Diego Fire-Rescue Department reported.

Local authorities implemented a shelter in place order Sunday for all non-responding personnel at the base to maintain a 1,800-yard safety perimeter as the firefight.

The Coast Guard also was assessing ‘environmental sensitivities and has contracted an oil-spill response organization to preemptively deploy protective boom to guard against any potential environmental concerns,’ according to a statement from USCG public affairs.

Officials in National City asked residents to remain in their homes as much as possible to avoid health hazards from the smoke billowing off the burning ship.

Local residents have reported smelling the smoke as far away as Vista, more than 40 miles from where the ship is docked.

According to the National Weather Service, the smoke carried through the county on Sunday and will continued to do so Monday. It said the highest concentration of smoke will eventually shift with an incoming onshore breeze. 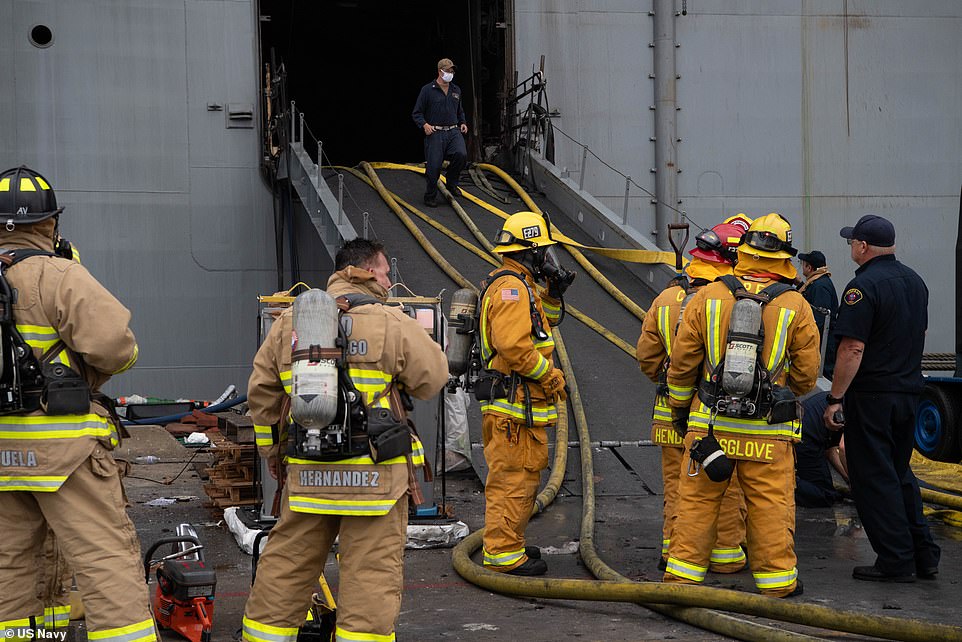 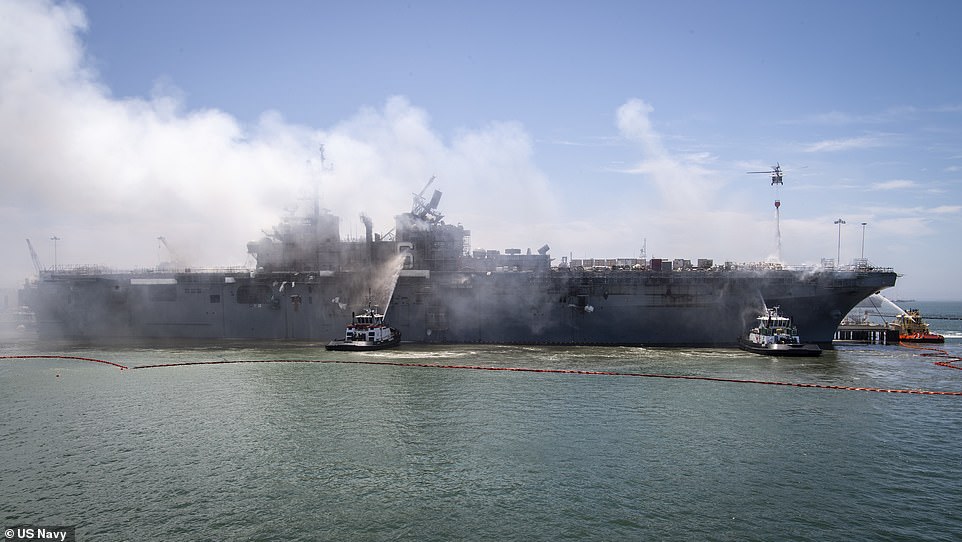 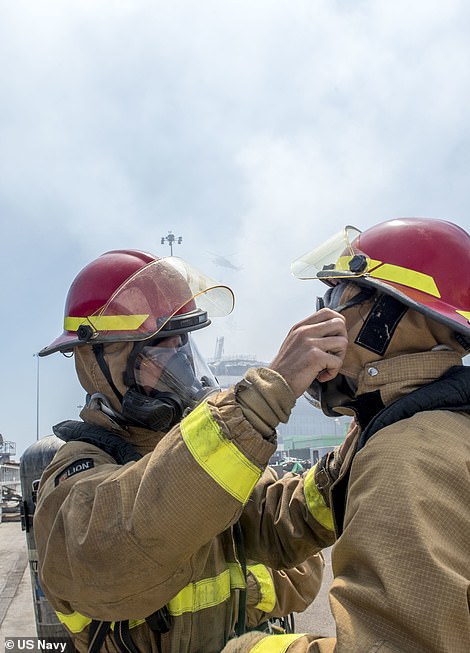 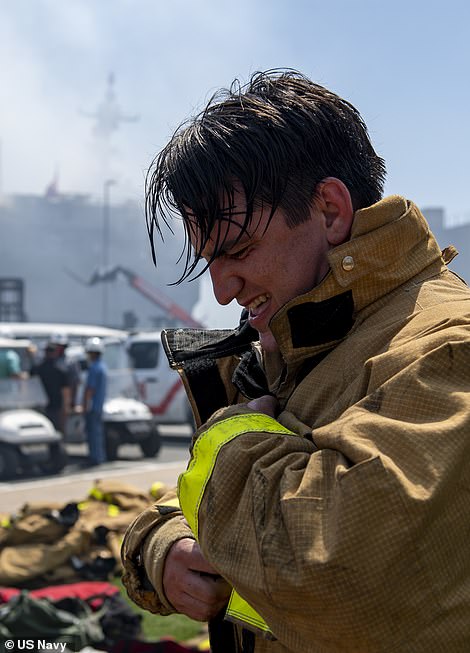 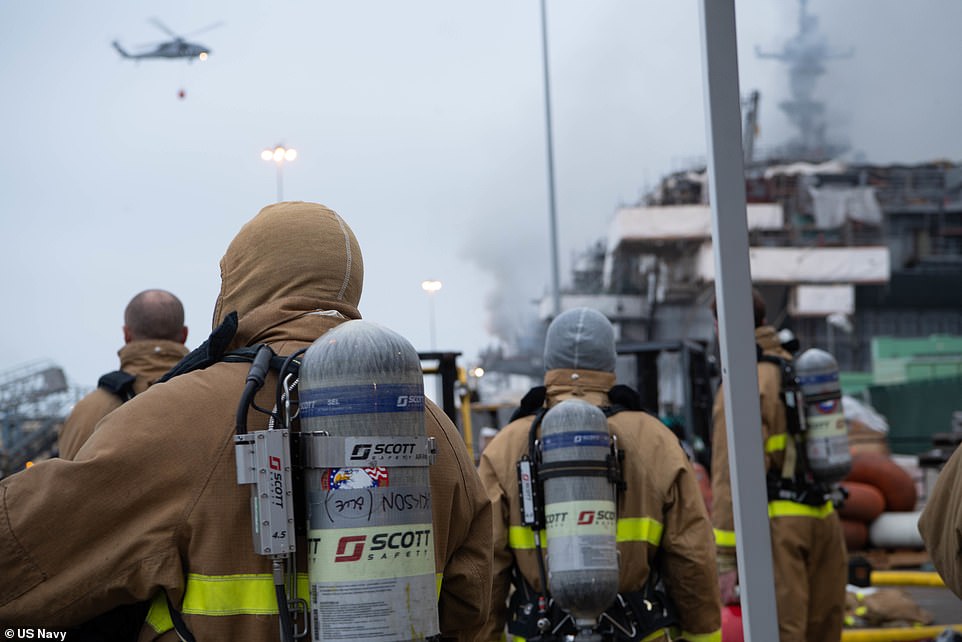 Rear Admiral Sobeck said: ‘I feel absolutely hopeful [the ship can survive] because we have sailors giving it their all’ 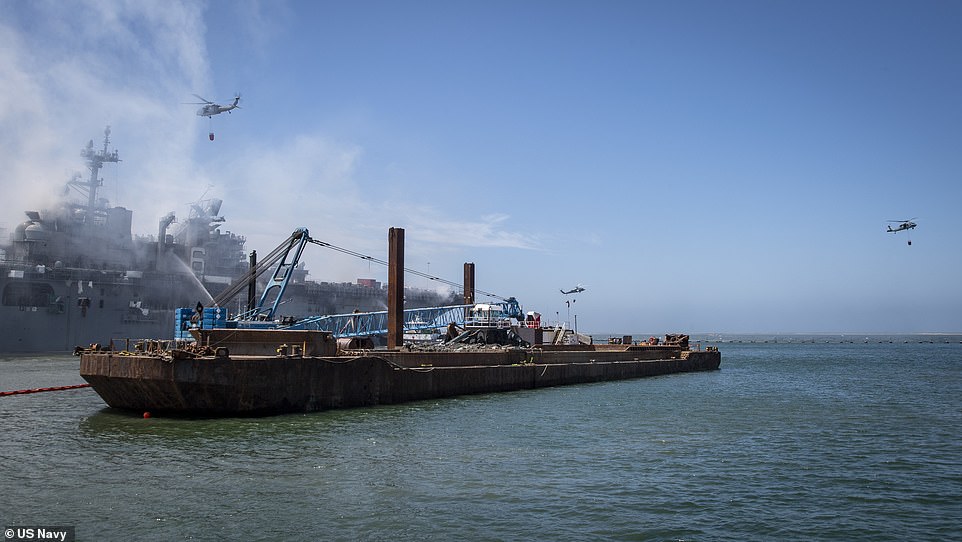 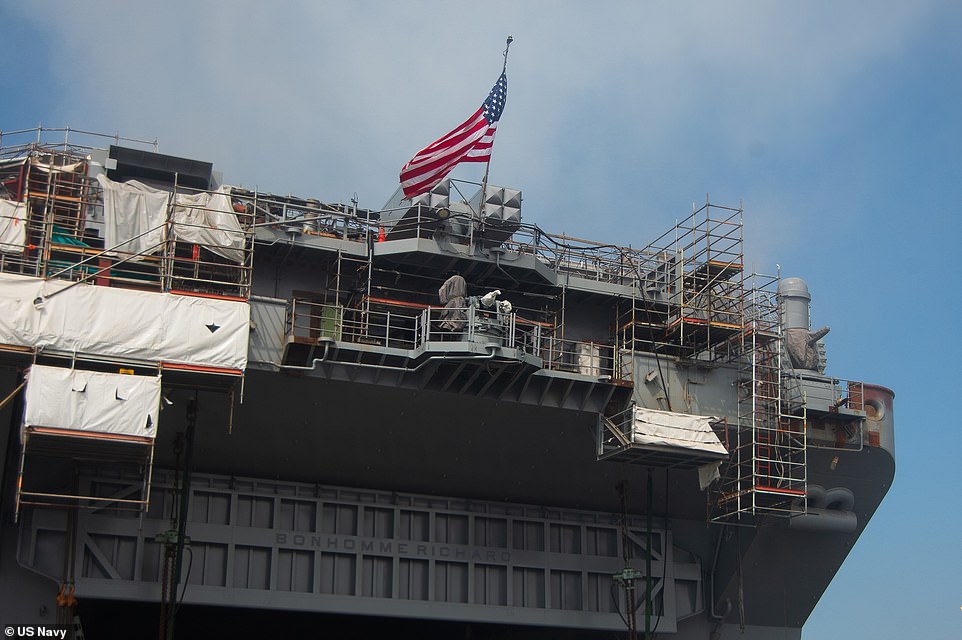 The Bonhomme Richard is capable of carrying more than 1,000 sailors, in addition to helicopters and fixed-wing aircraft. The cost of the ship has been estimated $761 million, according to the Federation of American Scientists.

The ship had been docked in the San Diego base to undergo routine maintenance between deployments when the fire broke out, Navy spokeswoman Krishna Jackson said.

Jackson told the New York Times that the sailors assigned to the ship at the time were staying in Navy or private housing on shore and were not on board when the fire started. A ‘duty section’ of sailors trained to fight fires were, however, of whom were first to respond.

Admiral Sobeck said that there was no ordnance on the ship at the time of the fire. The ship has light arms but would not normally have large explosive munitions, such as airdropped bombs, on board while docked, according to the Navy.

Two other warships, the USS Fitzgerald and the USS Russell, that were docked nearby have since been moved to other piers as a precaution, the Navy said.

The USS Bonhomme Richard has been homeported at Naval Base San Diego since its last deployment in spring 2018, when it returned from a six-year port switch to Sasebo, Japan.

The keel for the Bonhomme Richard was laid down in 1995 and she was delivered to the Navy in 1998.

Because of its age, a fire could be particularly destructive, especially if it reached the engine room and other tight spaces with machinery, said Lawrence B. Brennan, a professor of admiralty and international maritime law at Fordham University in New York.

‘The heat of a fire of this nature can warp the steel, and that can be a major problem for any ship,’ said Brennan. ‘On an older ship, it’s even more of a problem.’ 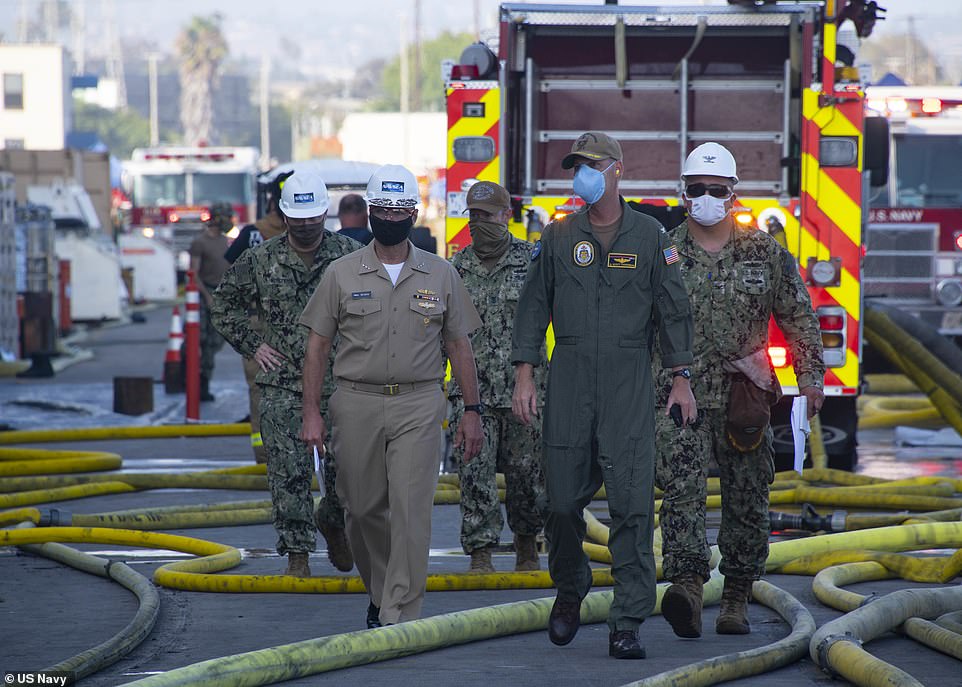 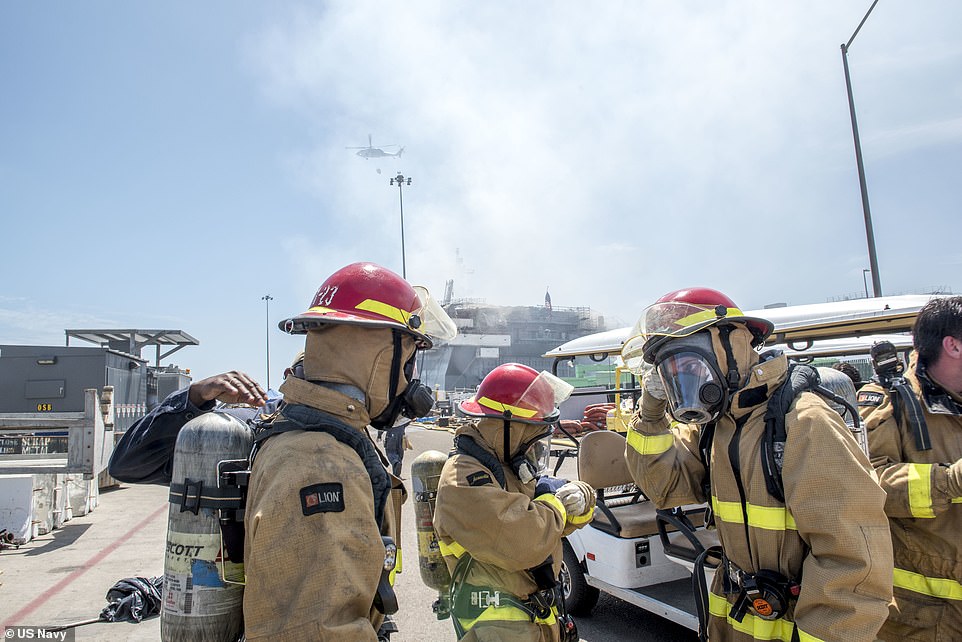 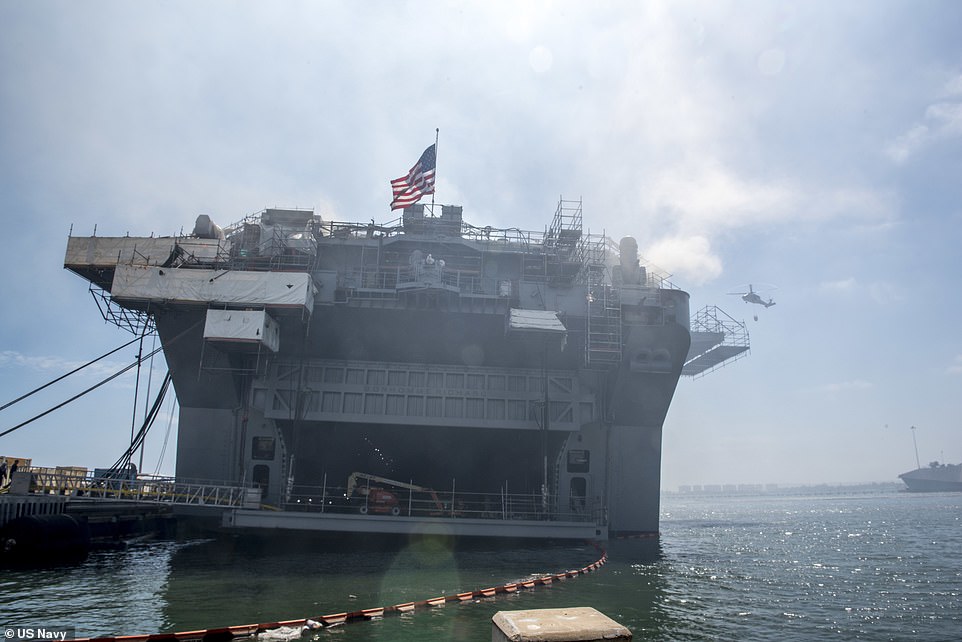 Fire Chief Colin Stowell of San Diego also told CNN that he expects the fire to burn for several days – ‘right down to the waterline’.

Sobek, however, voiced optimism that the ship can still be saved during his Monday conference, saying that he’s ‘absolutely hopeful’ at his chances of survival ‘because we have sailors giving it their all.’

The Chief of Naval Operations, Admiral Michael M. Gilday, called the fire a ‘terrible tragedy’ in a post on Twitter Sunday.

‘Today, we suffered a terrible tragedy aboard USS Bonhomme Richard when a fire broke out aboard the ship while in port San Diego,’ Gilday said.

‘The remainder of the crew is accounted for,’ the admiral continued. ‘We are grateful for the quick and immediate response of local, base, and shipboard firefighters aboard BHR. Our thoughts and prayers are with our BHR sailors, their families, and our emergency responders who continue to fight the fire.’

San Diego Mayor Kevin Faulconer tweeted: ‘We are here for the sailors and civilians affected by the ship fire at Naval Base San Diego. SDFD and other first responders continue to lend support. All of the crew is off the USS Bonhomme Richard and accounted for. Thank you to our brave sailors and rescue crews.’