A suitcase containing the bloodied body of a murdered dentist was left sitting in the lobby of a five-star hotel while her ‘killer’ went to fetch a car.

Preethi Reddy, 32, was laid to rest on Saturday, six days after she was believed to have been stabbed to death by her ex-boyfriend Harshwardhan Narde, 34.

Indian immigrant Narde is suspected of butchering her in a jealous rage in a hotel room at the Swissotel in Sydney’s CBD on Sunday.

Preethi Reddy, 32, was laid to rest on Saturday, six days after she was believed to have been stabbed to death by her ex-boyfriend 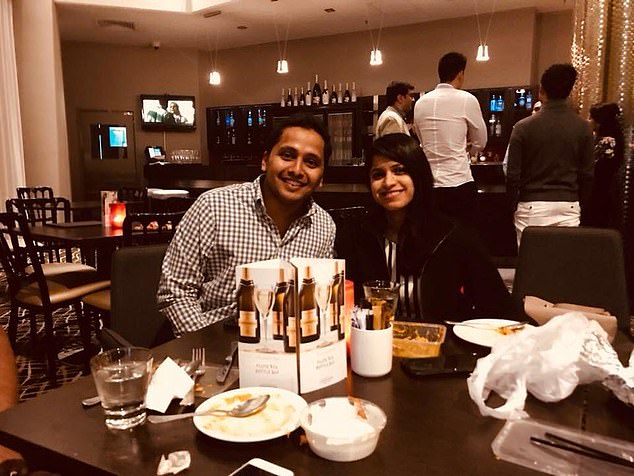 He is then believed to have stuffed her body into a suitcase and dumped it in the boot of her car, before deliberately driving his BMW into the path of a semi-trailer and killing himself.

After he is believed to have killed Dr Reddy, Narde simply wheeled the suitcase through the hotel small foyer that afternoon.

He left the bag sitting in the foyer while he fetched Dr Reddy’s car and got some help from a porter to load the heavy luggage into the boot, police said.

From there he drove the grey Volkswagen Golf to Kingsford, about 7km to the south, parked it on quiet Strachan Lane, and walked away.

Police believe he chose the street because he was familiar with the area from when he lived in Sydney and knew many cars were parked on it so it wouldn’t stand out. 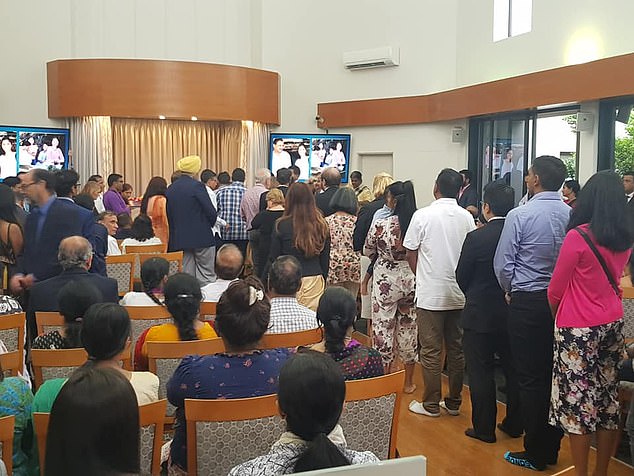 More than a hundred mourners packed a hall at Pinegrove Memorial Park in Minchinbury, western Sydney, on Saturday for Dr Reddy’s funeral 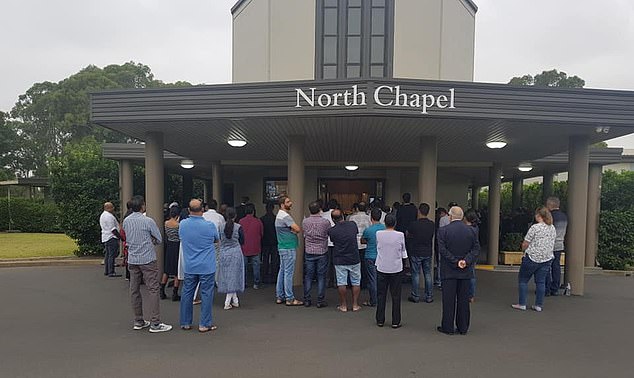 The service, which preceded Dr Reddy’s body being cremated, was quickly organised after a post-mortem examination was completed on Friday. So many attended they couldn’t fit in the chapel

The car was eventually found about 9.30pm on Tuesday after a three-day search starting from when Dr Reddy’s family reported her missing on Sunday night.

Narde returned to Tamworth, 400km northwest of Sydney, and was interviewed by local police on Monday morning.

About 10pm that night he got in his BMW and deliberately swerved into the path of a vegetable truck, dying instantly in a fiery crash. The 49-year-old truck driver survived.

Forensic officers have processed the hotel crime scene and identified what they believe is the murder weapon, but declined to give further details. 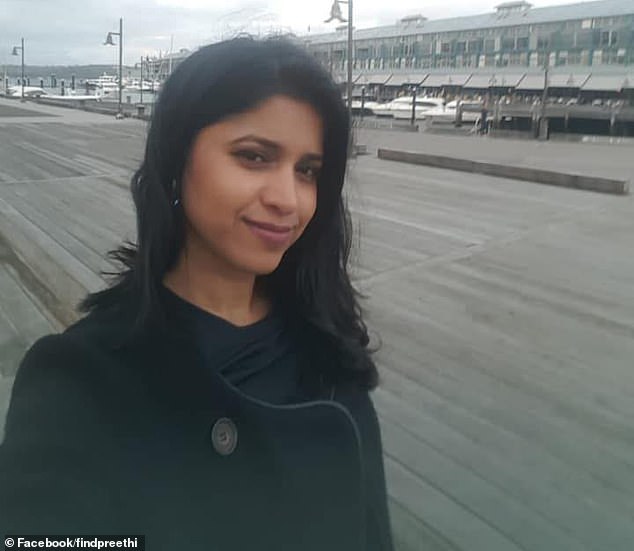 Dr Reddy spoke on the phone with her family at 11.06am on Sunday and she ‘gave no indication anything was wrong’ and she promised to be home in a few hours after having a late breakfast 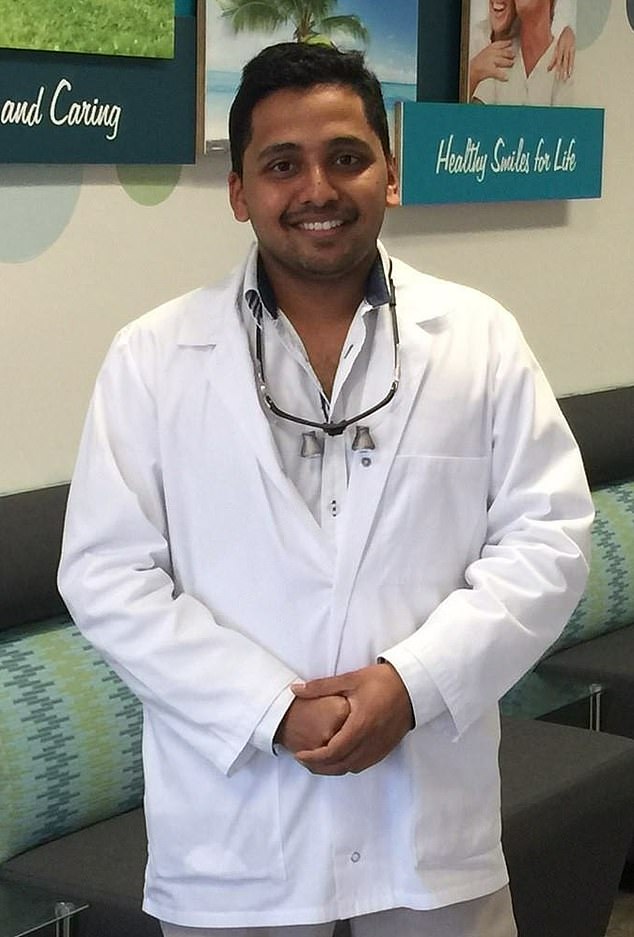 Harshwardhan Narde (pictured) died in a fiery crash on the New England Highway in NSW on Monday, a day after Preethi Reddy, 32, vanished from Sydney’s CBD

So many mourners attended that dozens had to stand outside the chapel and listen as there was nowhere near enough room inside.

The service, which preceded Dr Reddy’s body being cremated, was quickly organised after a post-mortem examination was completed on Friday.

‘Your beautiful smile will be forever etched in our hearts,’ a friend said after the service.

That evening, dozens of others attended a candlelight vigil on the steps of the Sydney Town Hall, including friends, former classmates, and members of the public.

Well-wishers left bouquets of flowers and messages of remembrance and support for Dr Reddy’s family on the steps beside smiling photos of her.

Other vigils were held in Melbourne and Brisbane with an additional vigil to be held in Canberra next weekend.

Dr Reddy’s family are still wondering what happened in the last moments of her life after she called them from the hotel room where she was killed. 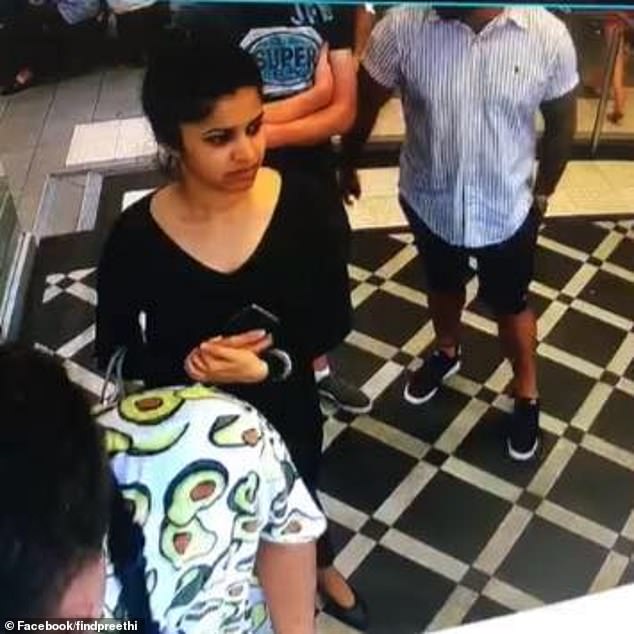 She was last seen on CCTV waiting in line at McDonald’s in The Strand Arcade, off George Street, about 2.15am on Sunday (pictured)

She and Narde attended the same dental conference in St Leonards on Friday and Saturday and had dinner at a nearby Indian restaurant on Saturday night.

Friends believe Dr Reddy agreed to have dinner with Narde to gently ‘tell him it was over once and for all and he needed to move on’.

Police confirmed this account, saying the family was aware the pair spoke on the weekend.

‘The intention of their conversation was that she really just wanted him to move on because she had,’ police told Daily Mail Australia. 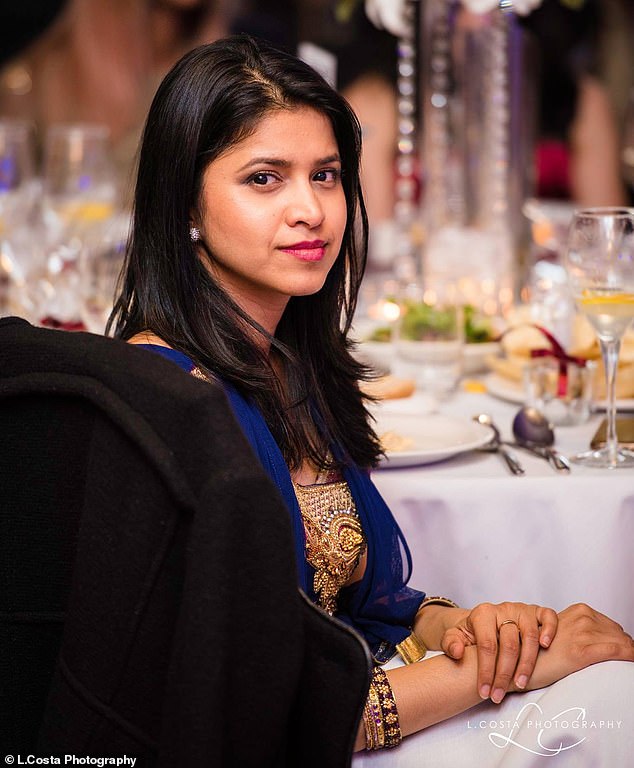 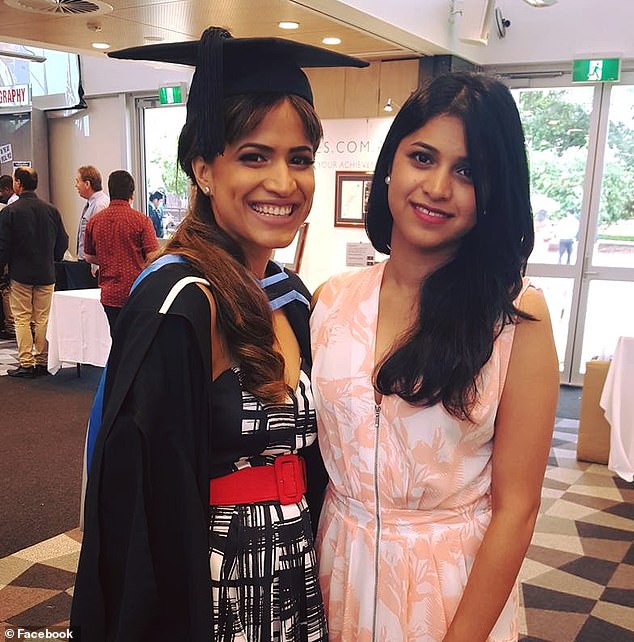 Dr Reddy’s sister Nithya (left, with Dr Reddy) issued a moving statement on behalf of her family on Tuesday night

They then spent the night in his room at the Swissotel on Market Street in the Sydney CBD where friends say he tried to convince her they should get back together.

However, he is believed to have flown into a jealous rage when she told him she planned to move to Melbourne to be with her new boyfriend.

Dr Reddy called her family from the hotel room at 11.06am on Sunday promising to be home in a few hours, but was never heard from again.

‘How are you dad? I’m just charging my phone, then I’m going to get some breakfast and come home,’ she told her father.

She then called her new boyfriend and told him the same thing. It was not known if Narde overheard this call, which would have fuelled his rage.

Less than three hours later, at 1.47pm, Ms Reddy’s phone went dead and her family believes she may have been murdered during this time. 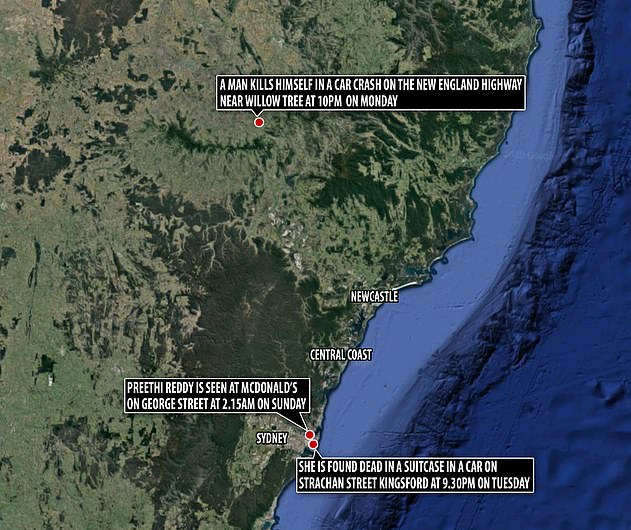 Dr Reddy was last seen at a McDonald’s before her body was found in a suitcase in her car on Tuesday. Her ex-boyfriend died in a car crash on Monday 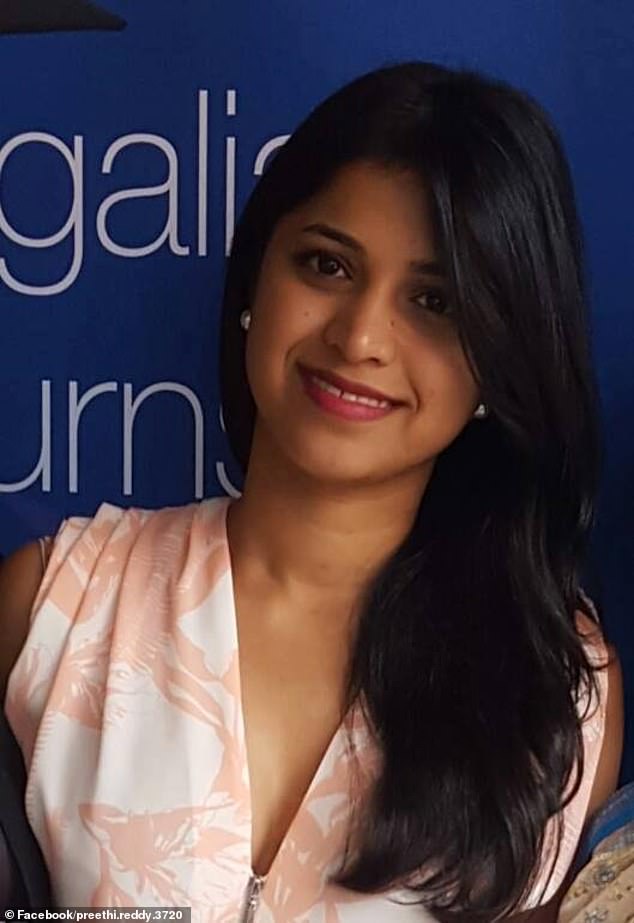 He stuffed Ms Reddy’s (pictured) body into a suitcase and dumped it in the boot of her car, then deliberately drove his BMW into the path of a semi-trailer and killed himself

A source close to the family told Daily Mail Australia the ‘studious’ young woman’s father was in anguish wondering about her last moments.

‘He knew she must have been frightened and wondered if she suffered. He feels very helpless,’ they said.

‘He admired how she was studious and always wanted to learn more and he was so proud of her.’

The pair had dinner at an Indian restaurant in Crows Nest later that night.

2.15am: Dr Reddy is seen at a McDonald’s on George Street in the Sydney CBD.

She is believed to have stayed in a Swissotel room on Market Street in the Sydney CBD with Narde.

11am: Dr Reddy last spoke to her family, telling them she planned to head home in a few hours after having a late breakfast.

Narde in the afternoon left the hotel and returned to Tamworth.

5.30am: Narde replied to frantic text messages from a friend about Dr Reddy, denying he knew where she was.

Narde was later that morning questioned by police.

10pm: Narde died after driving his BMW into a deliberate head-on crash with a truck.

9.30pm: Dr Reddy’s body is found stuffed inside a suitcase in the boot of her grey Volkswagen Golf on a street in Kingsford.

Meanwhile, Ms Reddy’s mother was repeating over and over: ‘My daughter is never coming home, I don’t have a daughter anymore, I’ve lost my daughter’.

Friends rallied around the family at their home in Penrith, western Sydney, as they struggled to deal with what happened to their daughter.

‘They are quite distraught, there’s a lot of helplessness in their eyes. They were looking forward to a wedding but instead she went to a conference and never came back,’ the source said.

‘They’re skinny people and you can see in their appearance what the anguish of the past few days has done to them.’

Detective Superintendent Gavin Dengate said telling Dr Reddy’s parents she was dead was the ‘toughest thing you can ever do’.

‘I have goosebumps talking about it. As a parent, the worst thing we can do is bury our kids. It’s a space none of us want to be in,’ he told reporters on Wednesday.

Ms Reddy’s new boyfriend was also getting support from friends of the couple.

‘I am doing as best as I can and more importantly worried about you all,’ he told friends on Thursday morning.

‘I know this has affected you and I need you more than ever to be strong for me and help me get through such a difficult time.

‘We will get through this. Preethi would have wanted for me to always be happy and I will be back to my cheerful cheeky self with your support.’

Dr Reddy’s sister Nithya issued a moving statement on behalf of her family on Tuesday night.

‘Words cannot capture the pain we are feeling with the passing of my beautiful big sister,’ she said.

‘Preethi was a bright light, loveable, kind and protective of all whom were lucky enough to have been loved and cared for by her.

‘While we now know that Preethi is no longer with us, the certainty of her movements on Saturday night and Sunday morning are not yet fully known, and we will stay in touch with detectives as they work it all out.’

Nithya said her family ‘would never be the same without Preethi in our lives’. 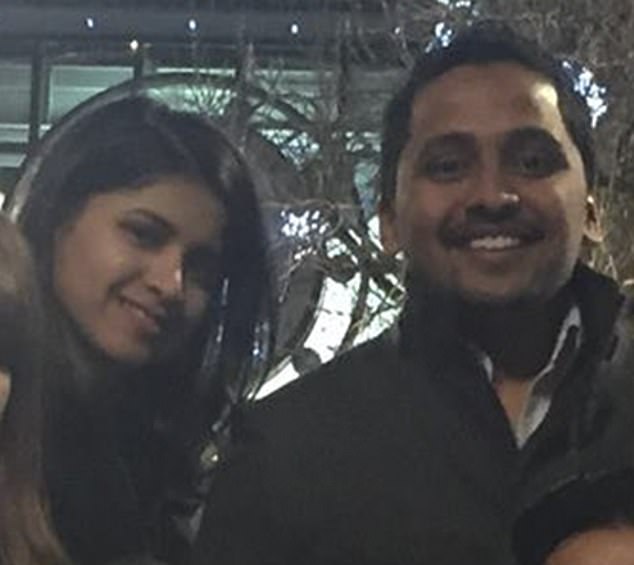 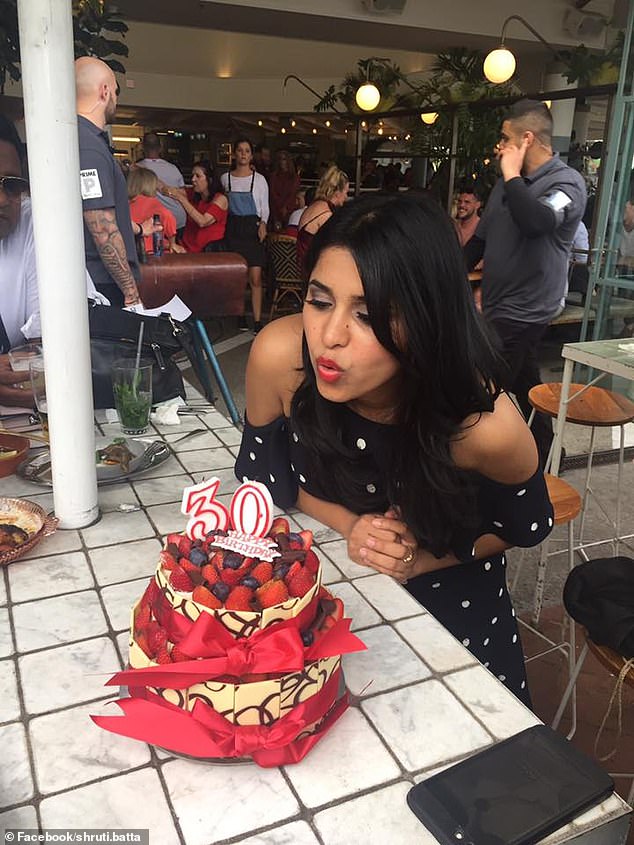 Detectives believe Narde acted alone in murdering Dr Reddy, before killing himself in the fiery crash hours after police interviewed him.

However, his family in India refuse to believe this version of events.

Dr Reddy and Narde had a tumultuous five-year relationship that ended for good last year, after which she started dating her new boyfriend in November.

They in 2013 during a course and they dated until 2016 but were on-again off-again by later in the year.

‘He was always forcing things, even when they weren’t a couple, and she’d go along with it even if she just wanted to be friends,’ a friend said.

By 2017, Dr Reddy decided to give the relationship another try and spent a lot of time in Tamworth, where Narde worked. 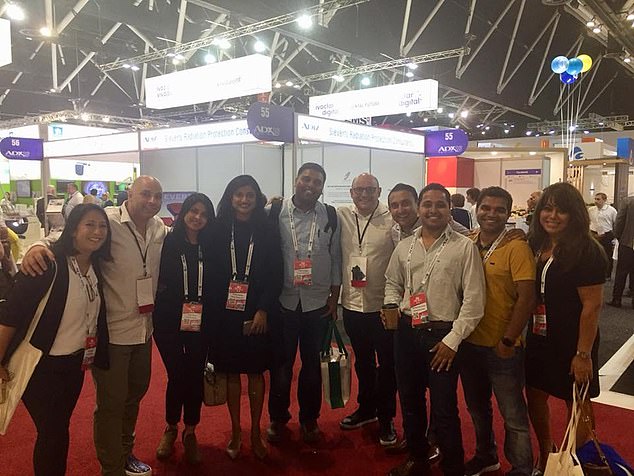 ‘Harsh kept complaining that she wasn’t trying to get a job in Tamworth and blamed her for everything wrong with the relationship,’ the friend said.

‘He was very possessive.’

Narde refused to let go after she ended their relationship for good last year, insisting they were ‘meant to be’ and kept trying to get back together.

On Friday when she was at the Bungalow 8 nightclub in Darling Harbour after the first day of the conference, she spoke about how hard Narde being there was.

‘Preethi said he wasn’t himself, that there was something off about him,’ they said.

Within 48 hours Ms Reddy was reported missing after not returning home and hundreds of friends and family were desperately searching for her.

About 5.30am on Monday a close friend sent frantic messages to Narde to see if he had heard from her. 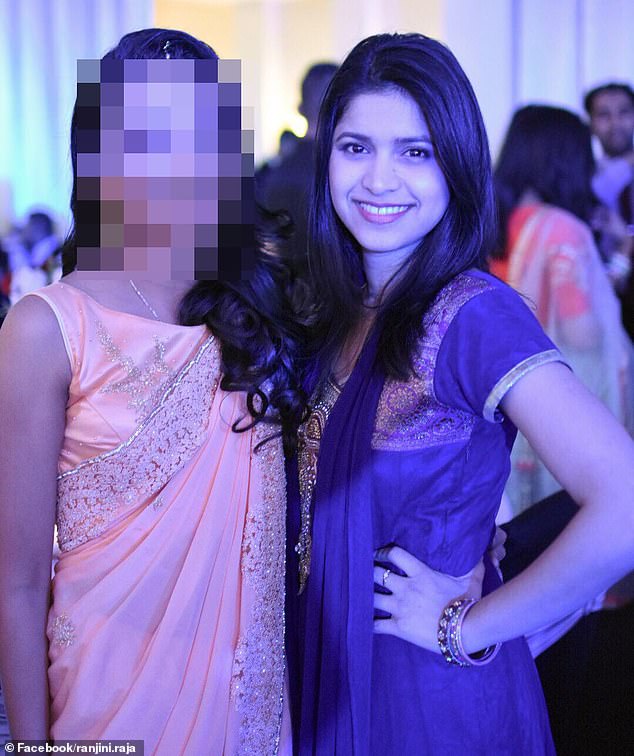 Dr Reddy alternated between not wanting to tell her friends, family, and colleagues she was back together with Narde, and not wanting to say they broke up

‘Hey I spoke to her in person on Saturday evening… she said [she was going] home,’ he replied

Dr Reddy’s friend wrote back: ‘Maybe she is sleeping somewhere’ – to which Narde eerily replied ‘maybe’.

Narde then told the friend he had spoken with Dr Reddy’s sister Nithya and the family was very worried, but said he had no idea where she might be.

‘I don’t know what to say, we spoke after a few months, a gap of over 4/5 months… I just woke up and looking at this,’ he wrote.

When the friend said she was scared Narde replied: ‘I feel disturbed as well… am sitting at one place for the last 30 minutes.’

But police suspect Dr Reddy was already dead when Narde was replying to the messages denying he knew where she was.