PICTURED: Heavily-pregnant mum, 32, who died after falling from a moving car – as her boyfriend is arrested and her newborn baby fights for life after being delivered by emergency C-section

A heavily-pregnant mother-of-two who died after falling from a moving car has been remembered as a ‘beautiful, caring’ woman as her baby fights for its life.

Helena Broadbent died near her Keilor Park home in Melbourne on Saturday.

The 32-year-old sustained life-threatening injuries after she fell from a car police now believe was driven by her partner and the father of her two kids, 7News reported.

After the accident she was airlifted to Royal Melbourne Hospital where doctors performed an emergency caesarean and successfully delivered her baby.

She died a short time later, while her newborn baby was transferred to Royal Women’s Hospital and remains in a critical condition.

Helena Broadbent (pictured right, with her brother Paul) died near her Keilor Park home in Melbourne on Saturday

Her brother Paul Broadbent told 7 News she was delighted to be having another child.

‘She was a beautiful, caring mum who loved those two kids, and she was so looking forward to the new one on the way,’ he said.

The argument allegedly continued in the car and ended abruptly when she fell onto the road as the car turned around a corner.

He was was arrested a short time later.

He is expected to appear in Melbourne Magistrates’ Court. 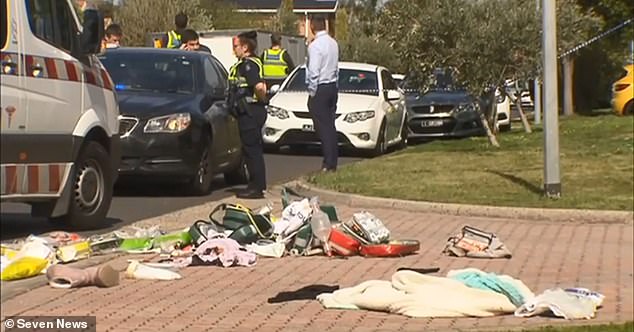 Neighbour Ivan Sucic told The Herald Sun Ms Broadbent and her partner – who is the father to her three children, had been living nearby for a few years.

He said there never appeared to be any issues with the couple, but noticed a man leaving the house before he ‘jumped in the car, slammed the door when he went in.’

Mr Sucic said he heard Ms Broadbent scream, and minutes later, he saw the couple’s two daughters standing out the front of the home as a man in a dark hoodie ran from the scene.

The two girls are reportedly staying with their grandmother.

‘I saw bruises on (her) left side from the buttock to the top, she was bleeding through her nose,’ he said.

Images taken from the scene show personal items, including shoes and clothing, strewn across a driveway.

Any witnesses or anyone with information is urged to contact Crime Stoppers on 1800 333 000. 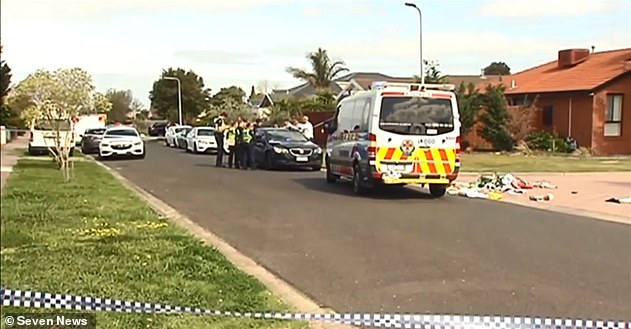 Police believe the incident occurred after a man known to the 32-year-old woman threatened her with assault at a home in Kiwi Retreat, a suburb of Melbourne (pictured)