Maternity shoots say a lot about a person – from Kourney Kardashian’s risqué naked photographs to Beyonce’s goddess-like images that made her an icon.

One South Akron, Ohio, woman is stirring a whole new kind of buzz for her maternity photos for her fourth child, that reveal 20,000 live honeybees swarming around her baby bump.

Full-time beekeeper Emily Mueller, 33, shares that insects have been a huge part of her family and business, and it felt only fitting to include them in her momentous maternity shoot. 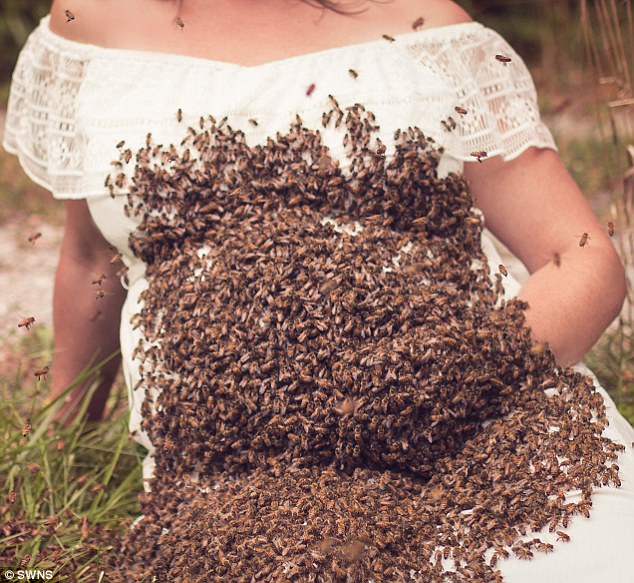 Bee my baby! Emily, who runs a bee removal business, had no fear when the bees sat on her belly and three even stung her along the way 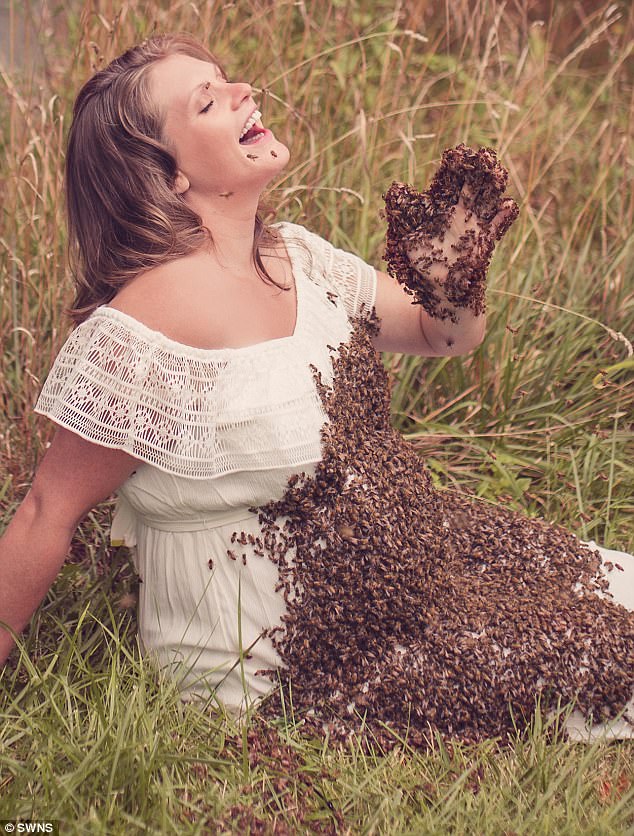 Honey for my honey: The bee’s were attracted to the queen bee in Emily’s hand, but that didn’t stop some bugs from flying elsewhere and nearly into her open mouth (above)

‘Bees have been a huge part of our lives for the past few years so I wanted to incorporate them into something important to me – like my maternity photos,’ she says.

Emily, who runs Mueller Honey Bee Removal with her husband Ryan, 37, shares she’s always felt comfortable with bees. The two own 24 hives for their company and tend to a whopping 1.2million bees total.

For her, the bees aren’t just a part of her work, they’re a meaning part of her life. When opportunity knocked, she decided to incorporate the bee’s into her maternity photo shoot.

‘A lot of people think I’m insane but I’m so comfortable with bees so it was never something I had anxiety about,’ she says.

But just how did she manage to tame an entire hive to sit around her swollen stomach?

The morning of the shoot Emily was called for a job that required her to remove a hive from a park. She decided to put the loose hive to creative use for her photos.

‘I had been called to a swarm removal that morning so I fed those bees sugar to make sure they would be content and gentle enough to work with,’ she says.

She strategically planned the shoot to have all the insects safely and calmly settle on her baby bump for the perfect photo. 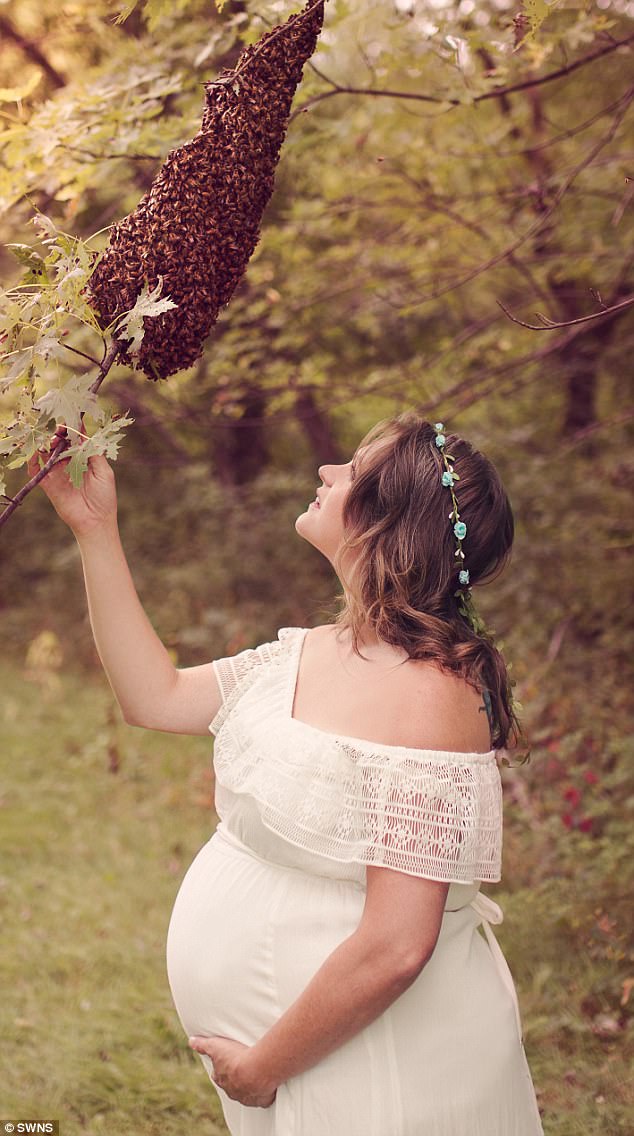 Bee blessings: Emily shares that the bees not only represent her work but also represent death and life, and in this photo shoot they symbolize her three children and three miscarriages 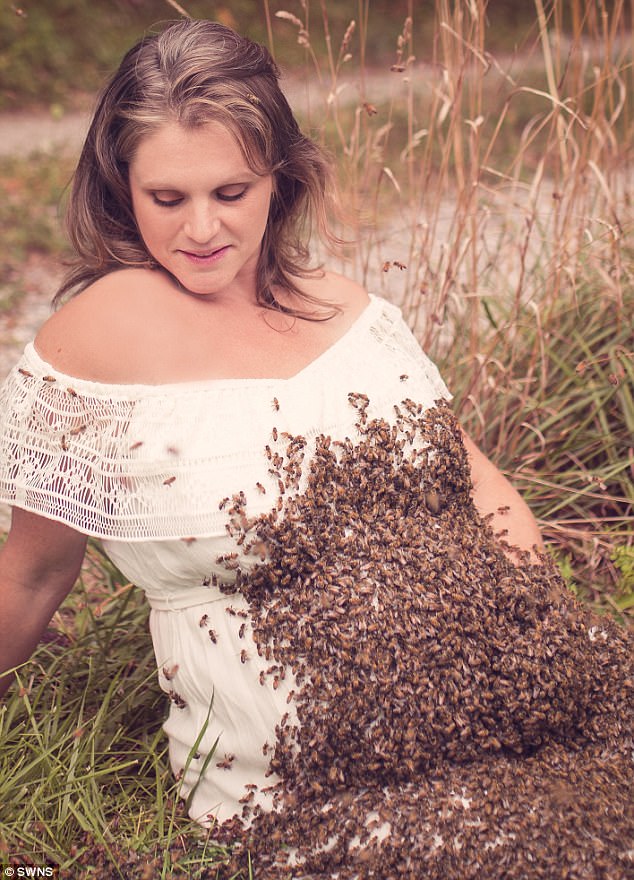 Harmless Honey: After sitting through the shoot she exclaimed the photos were ‘worth it’

The key to the shoot lied with the queen bee. Emily delicately extracted her from the hive and held her in a cage in her hand.

‘Then I put the queen bee in a cage and tied it to a branch in a tree in the garden. She is larger and bigger so it was easy to identify her,’ she adds.

Emily had her husband carry the branch holding the hive near Emily so that the bees could settle nearby, on her body.

All it took was a shake of the hive and bees came flying out and settled right on Emily’s body, near their heiress in the beekeeper’s hand.

‘Having them all on me was this clinging sensation. They all stick to you and they are very warm, so it’s almost like when a kitten is walking on you,’ she describes.

It may have felt comfortable, but that didn’t stop three bothered bugs from stinging her during the shoot. Despite the shockingly loud shriek of the honeybees, Emily says she kept her cool.

‘I felt calm throughout, though I did get stung three times,’ she explains.

‘I accidentally squished one with my butt and another under my arm pit, and the third time I was pretending to eat a bee jokingly and I squashed one against my lip,’ she adds.

Her photo shoot stings, however, are nothing to the experienced beekeeper who says she’s been stung a whopping 350 times this year alone.

‘I wore a dress that was long and covered my stomach and legs so the bees would be on the outside of my body as a cautionary measure, but I knew it was safe,’ she says on her precautions.

‘The photos were worth it. I love them,’ she exclaims. 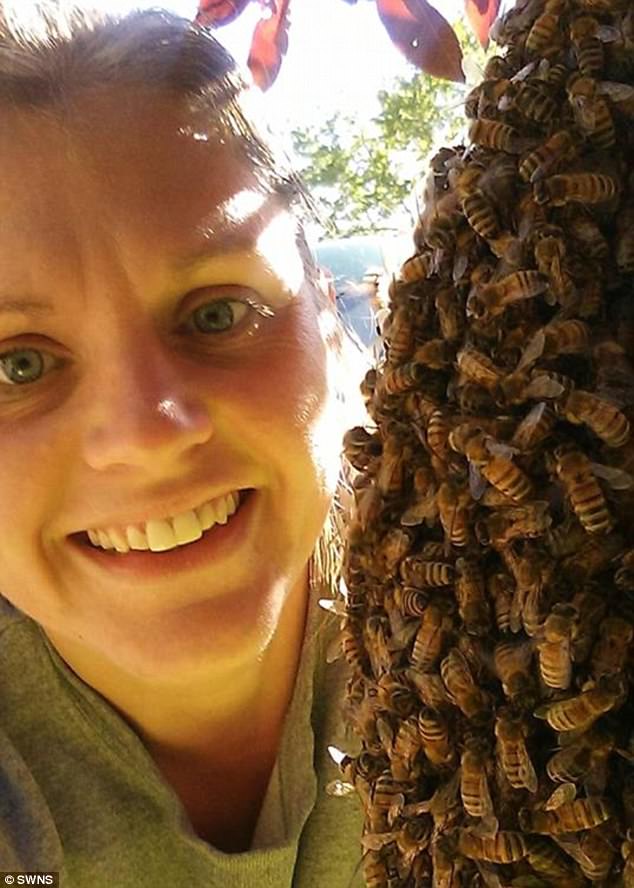 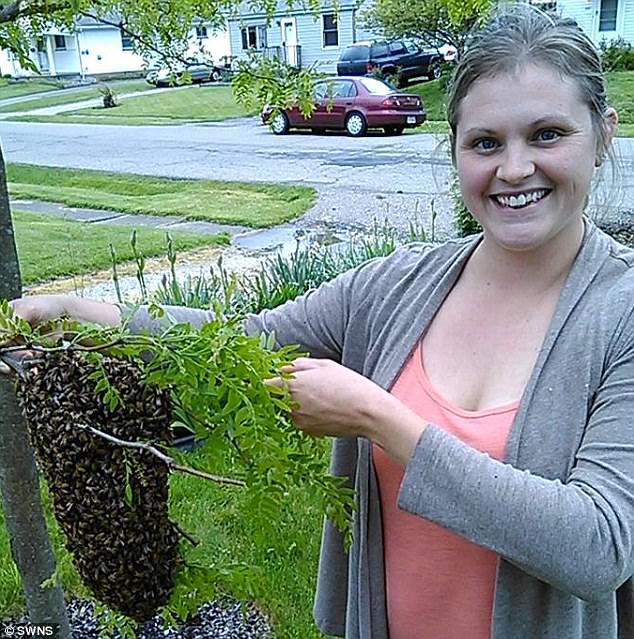 Nature gal: She smiles and shows off  hive in her company (above), which started when her father gifted her a hive to make honey. Quitting her former job, she pursued the bee business 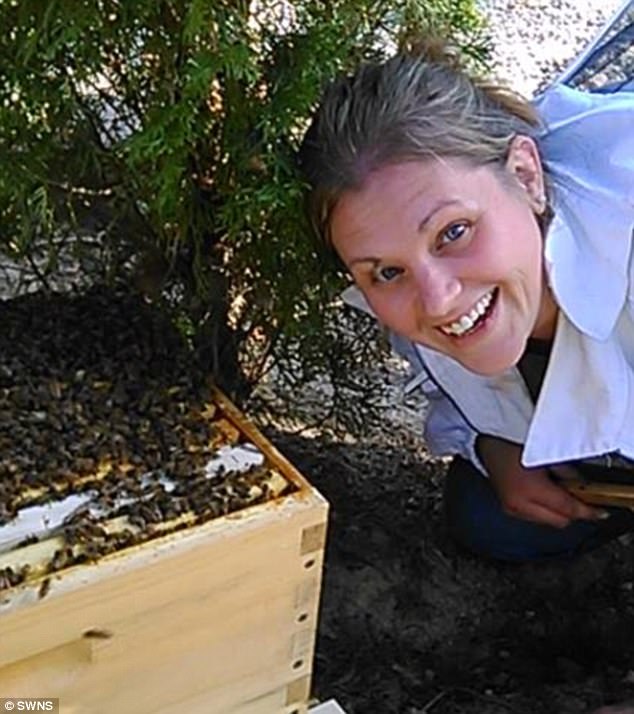 Bee happy! Donning a beekeeper’s outfit with mesh hood, she tends to one of her hives

Emily’s love for bees began when her father gifted her a hive.

‘A few years ago my father gave me a hive. He had been doing it for a few years but they kept dying,’ she shares.

‘He was tired of spending money on them so he gave me the hive and I got started,’ she adds.

The former communications worker then ditched her job to focus on a honey business.

‘I didn’t know anything about bees but I had had my second child and I didn’t like working any more, so I decided to start selling honey,’ she says.

Today Emily and Ryan are sharing their love and care for bees with their children Cadyn, 10, Madelynn, three and Westyn, one.

But for the mom-of-three the striped insects have a much more emotional meaning.

‘Bees represent life and death and they are very spiritual creatures,’ she says.

‘I have three children and I had three miscarriages so it was in tribute to them all,’ she adds.

Her unique photo shoot not only caused an online buzz but also offer an insightful look into the friendly nature of the notoriously painful creatures.

‘I just want to raise awareness about how gentle they are,’ she says.