A 29-year-old woman’s labor was induced four weeks early after scans suggested she had breast cancer.

Lindsey Gritton, from Gainesville, Georgia, was in week 34 of her pregnancy when a burning sensation erupted over her right armpit and breast. She also found a ‘marble-sized’ lump in the breast.

Doctors told her it was a clogged milk duct — like in her first pregnancy — and that they’d seen it a ‘thousand’ times, but she still demanded a scan.

When the results came back, medics backtracked saying there was now a ‘high likelihood’ that she had cancer. She had labor induced a week later, and then went through more tests — which couldn’t be done during pregnancy due to the radiation — which revealed it was stage four breast cancer and had spread to her liver.

The mother-of-two has now been on chemotherapy for four months, visiting hospital every three weeks for treatment. About 80 percent of the cancer is now gone. 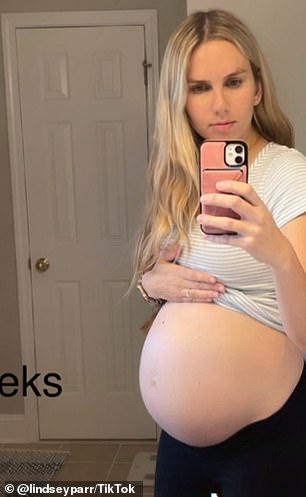 Lindsey Gritton, from Gainseville, Georgia, is pictured above at eight (left) and 25 (right) weeks pregnant. She noticed the cancer warning signs on week 34, and had birth induced a few weeks later 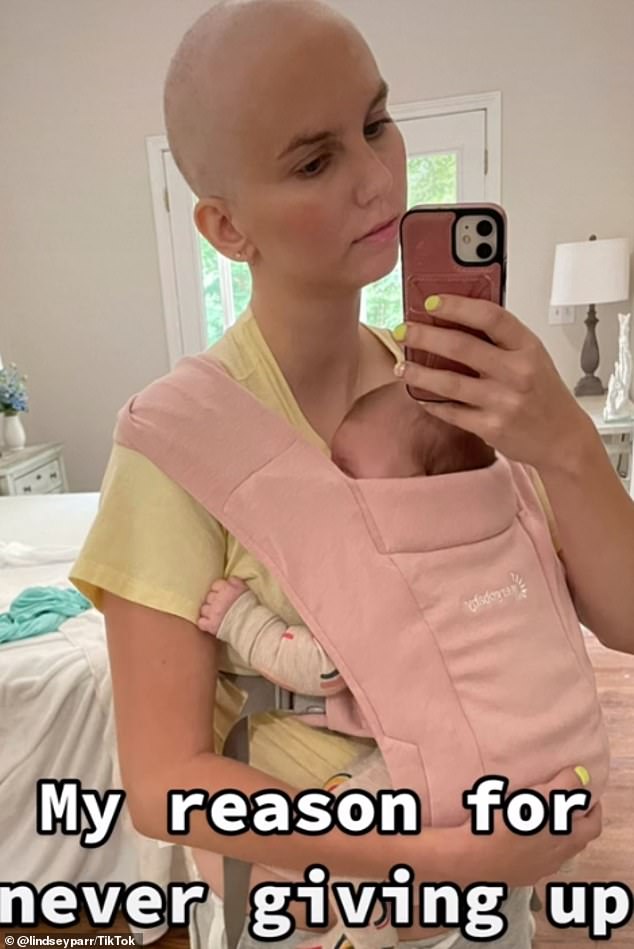 She has now been receiving chemotherapy every three weeks for four months, and 80 percent of the cancer has now gone doctors say 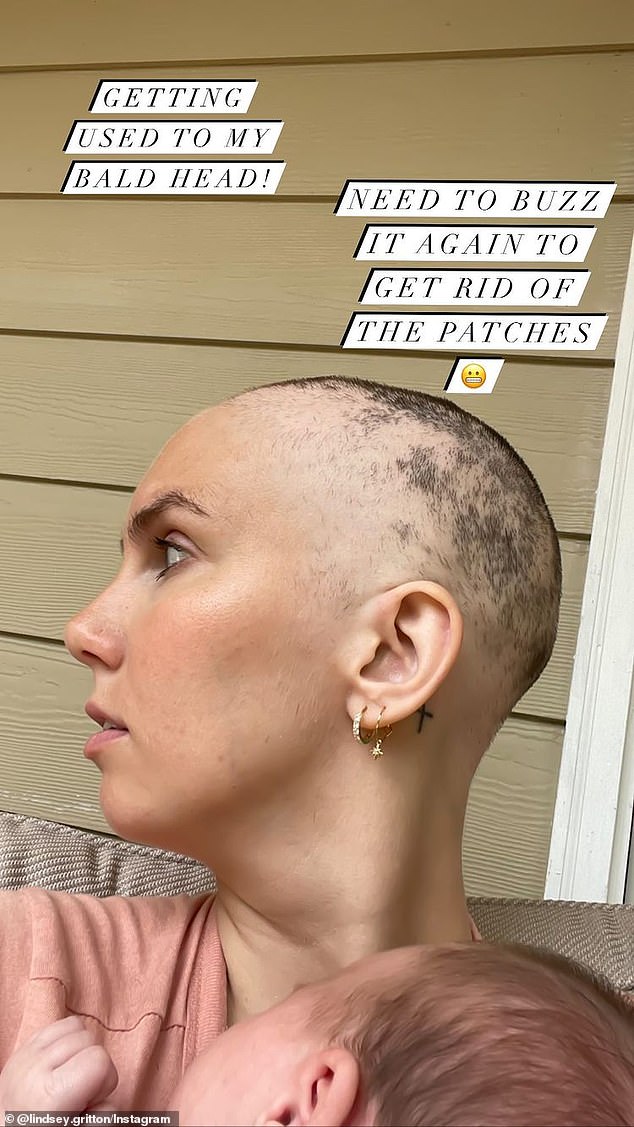 Medics initially told her the symptoms were likely being caused by a blocked milk duct, like in her first pregnancy. But Gritton didn’t believe this was the case

Only about two percent of breast cancer cases are diagnosed among women under 35 years old every year, but when it is detected it tends to be found at a later stage and much harder to treat.

Those who have close relatives diagnosed with the cancer, have had other breast health problems in the past or previously received radiation therapy are more at risk.

Breast cancer is the most common type of cancer among women.

But cases are normally detected in women who are about 55 to 74 years old. It is rare for the cancer to be detected in younger age groups.

Symptoms of the cancer include the following:

Gritton revealed that when the symptoms started in April, the burning sensation would come and go until one week when it persisted.

Shortly after, she found a lump the size of a ‘small marble’ on her right breast. But doctors initially dismissed her concerns saying it was a clogged milk duct.

Gritton told the Insider: ‘[My doctor said]: “I’ve seen this a thousand times. I have so many people with this problem when they’re pregnant”.

‘And I just knew what a clogged duct felt like,’ she said, ‘and so in the back of my head, I knew that it wasn’t that.

‘She [the doctor] didn’t even want to do an ultrasound. I had to just keep asking for it. I was like, “I really need an ultrasound because I’m really worried about it”.’

Gritton initially took antibiotics to help clear the lump, and underwent a scan revealing a ‘high likelihood’ of cancer.

She was then invited for a biopsy which, a week later, confirmed she had invasive ductal carcinoma — the most common form of breast cancer.

Birth was then induced a week later to carry out scans, which were not possible while she was pregnant due to the radiation.

She was given a positron emission tomography (PET) scan — where a small amount of radioactive tracers are injected into a vein that travel through the body but stop in areas where there are cancerous cells, allowing doctors to tell that the cancer has spread.

This is when doctors confirmed she had stage four breast cancer, or the most aggressive type.

Gritton said she was revealing her diagnosis to encourage others to stick up for themselves when they think doctors are wrong.

She said: ‘If I wouldn’t have advocated for myself, I don’t even think I’d be here today.

‘Because from what they told me with my blood work and everything, my liver was already failing.’

The United States Preventive Services Task Force (USPSTF) — which sets out national medical guidelines — says women should get checked for the cancer every other year between the ages of 50 and 74.

For younger women, it says they should consider getting checked if they are at higher risk of the cancer.

Factors raising the risk include a history of the disease, or previously having other breast health problems.