Pregnant women should be told about the risks of C-sections

Pregnant women should be told about the risks of placenta complications after a C-section, leading doctors have urged.

The Royal College of Obstetricians and Gynaecologists (RCOG) guidelines warned it was vital to diagnose placenta praevia and placenta accreta early.

Both conditions – which have affected Kim Kardashian and Amanda Holden – can cause heavy bleeding towards the end of pregnancy, or during or after birth.

The RCOG is calling for more scans and specialist care to reduce any risks and for doctors to discuss the safest way to give birth with expectant mothers under new guidelines.

Placenta complications are on the rise and are set to continue to increase as more women opt for caesareans, use IVF or have children older, the RCOG said.

TV personality Kim Kardashian, who is married to Kanye West, discovered she was suffering from placenta accreta after giving birth to her daughter North West in 2013. This can cause severe bleeding. Kim is pictured at the Costume Institute Gala in New York in May this year

The new guidelines recommend that women must be informed of this risk when discussing the benefits and risks of a caesarean birth.

Reality TV star Kim K, married to the rapper Kanye West, discovered she was suffering from placenta accreta after giving birth to her daughter North West in 2013.

Placenta accreta is a rare but serious condition that occurs when the placenta attaches itself too deeply into the wall of the uterus. It may then remain attached after birth, leading to severe bleeding.

And Britain’s Got Talent judge Holden nearly died after losing several pints of blood due to placenta praevia-accreta while having her youngest daughter Hollie in 2012.

Praevia-accreta occurs when the placenta lies in the lower part of the womb and partially, or completely, covers the uterus.

The disorders often occur as a result of C-sections and IVF causing scars to form in the uterus. They are also more common in women over 35.

Future pregnancies are then more likely to implant in the scar, leading to a greater risk of complications.

Placenta abnormalities are checked for during a woman’s 20-week scan.

In nine out of 10 cases, a low-lying placenta – placenta praevia – resolves itself by the follow-up scan. They are confirmed via a transvaginal ultrasound, which is safe for the both the woman and her baby.

If it is detected, a woman will have the opportunity to discuss her birthing options with her healthcare professional. A caesarean is usually the safest way to give birth, but this will depend on her individual circumstances.

Ultrasound scans are also 95 per cent accurate in spotting placenta accreta, which occurs in between one in 300 and one in 2,000 pregnancies.

If it spotted before birth, a specialist obstetrician will discuss all the birthing options and the extra care that will be needed.

It may be planned for a woman to give birth early, between 35 and 37 weeks of pregnancy, depending on individual circumstances.

A third condition, known as vasa praevia, occurs when blood vessels from the baby to the placenta pass near to the cervix and can tear during labour or when a woman’s waters break.

This is very dangerous as the blood lost comes from the baby.

Risk factors for vasa praevia include a low-lying placenta, a multiple pregnancy, or if the placenta or umbilical cord develops in an unusual way.

It may be possible to diagnose with ultrasound imaging at the 20-week scan. If confirmed, a woman should be offered a planned caesarean at around 34-36 weeks.

If suspected during labour or when a woman’s waters break, an emergency caesarean is usually recommended.

Dr Geeta Kumar, chair of the RCOG patient information committee, said: ‘It is important for women to be aware of these complications of the placenta, but they should be reassured that these are very rare and specialist care is available.

‘Early diagnosis is key to reduce harms associated with placenta praevia and accreta to ensure the safest possible outcome for mother and baby.’ 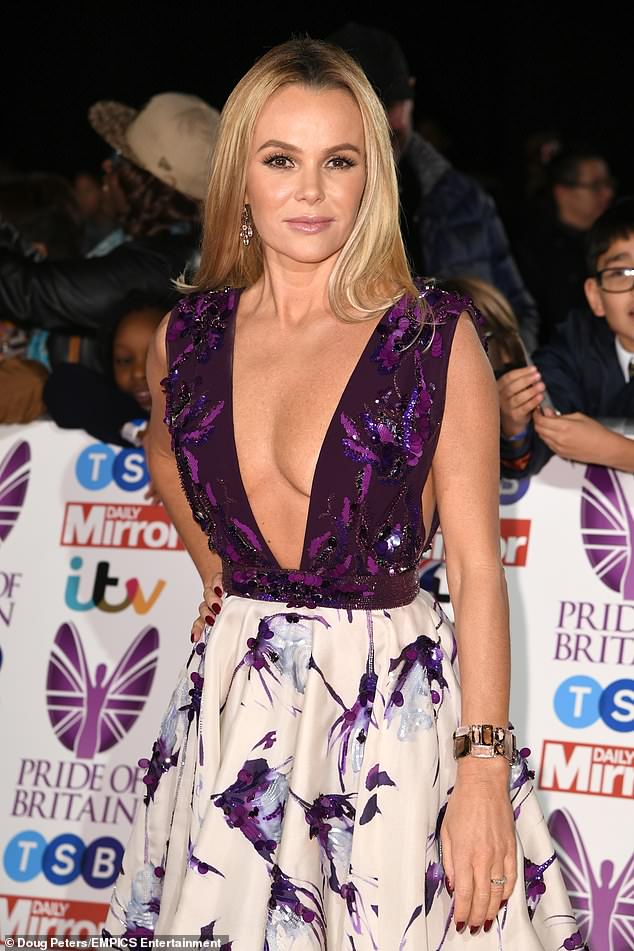 Britain’s Got Talent judge Amanda Holden nearly died after losing several pints of blood due to placenta praevia-accreta while having her youngest daughter Hollie in 2012. Amanda is pictured at the Pride of Britain awards in London last year

WHAT COMPLICATIONS DID KIM KARDASHIAN SUFFER DURING HER PREGNANCIES?

While pregnant with her eldest daughter North West in 2012-to-2013, Kim Kardashian developed pre-eclampsia.

This affects around one in 20 pregnancies and reduces the flow of blood through the placenta.

As a result, a baby does not get the nutrients and oxygen it needs to develop properly.

To prevent complications that would affect both her and her unborn child, the then 32-year-old Kim was induced six weeks early.

Immediately afterwards, doctors discovered she was suffering from the life-threatening condition placenta accreta.

This occurs when the placenta attaches itself too deeply into the wall of the uterus. It may then remain attached after birth, leading to severe bleeding.

Writing in a blog, she said: ‘My doctor had to stick his entire arm in me and detach the placenta with his hand, scraping it away from my uterus with his fingernails.

‘They say this is what some women died from as a result of childbirth back in the day, without proper care.’

After giving birth, Kim was forced to have two surgeries to remove scar tissue so she could conceive again.

Professor Eric Jauniaux, lead author of the guidelines and consultant obstetrician and senior lecturer at University College London, said: ‘We hope this updated guidance will support healthcare professionals during discussions with women and their partners who may be considering assisted reproduction, particularly IVF, or an elective caesarean birth.

‘These are both risk factors that can increase risk of developing these serious complications of the placenta.

‘Guidelines should also help clinicians diagnose these potential complications early, and to discuss with women the safest possible ways to give birth and the advantages and disadvantages associated with each approach to ensure the best possible outcomes and to ensure personalised care.’

The placenta is an organ that attaches to the lining of a woman’s uterus during pregnancy.

It passes oxygen and nutrients from a woman’s blood to her unborn baby.

Waste products from the baby, such as carbon dioxide, pass through the umbilical cord to the placenta for the woman to dispose of.

The placenta also produces hormones that help a baby to develop.

In addition, the organ acts as a barrier against most bacteria, but not viruses.

If heavy bleeding occurs after delivery, it can prevent blood from clotting normally. This can lead to life-threatening lung and kidney failure.

A blood transfusion and hysterectomy may be required.

Amanda Holden was 40 when she gave birth to her youngest daughter Hollie Rose Hughes on 23 January 2012.

A close friend told the Daily Mail: ‘Amanda nearly died. It was a life-threatening situation. There was a huge loss of blood.’

Figures released in November revealed more C-sections occurred in the UK last year than since records began in the 1980s.