Prehistoric cave painters may have been hallucinating through lack of oxygen, study claims

Prehistoric cave painters who daubed colourful murals on the walls of deep caverns thousands of years ago may have been hallucinating due to a lack of oxygen.

A new study speculates that the artists who produced numerous underground works across Europe may have deliberately starved themselves of oxygen.

Among the paintings mentioned by Israeli researchers are those dating from approximately 30,000 years ago in the Chauvet cave in Vallon-Pont-d’Arc, southern France.

The Tel Aviv University experts, led by Yafit Kedar, speculate that the artists made a deliberate effort to starve themselves of oxygen – a state known as hypoxia – by going deep underground.

Writing in Time and Mind: The Journal of Archaeology, Consciousness and Culture, the experts said the art was a ‘conscious choice, motivated by an understanding of the transformative nature of an underground, oxygen-depleted space.’

Ms Kedar told The Times: ‘The symptoms of hypoxia are very similar to when you are taking drugs and it occurred to me that maybe we are talking about alternate states of consciousness.’

A new study speculates that the artists who produced numerous underground works across Europe may have been hallucinating because of a lack of oxygen. Among the paintings mentioned by Israeli researchers are those dating from approximately 30,000 years ago in the Chauvet cave in Vallon-Pont-d’Arc, southern France. Pictured: Reproductions of the closely-guarded works at the Chauvet cave

The researchers noted how many Palaeolithic cave paintings in Europe are hundreds of feet from entrances.

The spaces they were drawn in were accessed via narrow passages and would not have been used for daily activities.

It prompted questions as to why the early artists ventured in to such cramped conditions.

The paintings, produced across a wide area of Europe between 40,000 and 14,000 years ago, depict animals including mammoths, bison and horses.

To find out whether the effects of oxygen deprivation may have played a role in the production of the works, the Tel Aviv researchers ran computer simulations based on cave sites in France and Spain.

The paintings and engravings in Rouffignanc, in the Dordogne, which are around 2,400 feet (730 metres) from the entrance, are among those included. 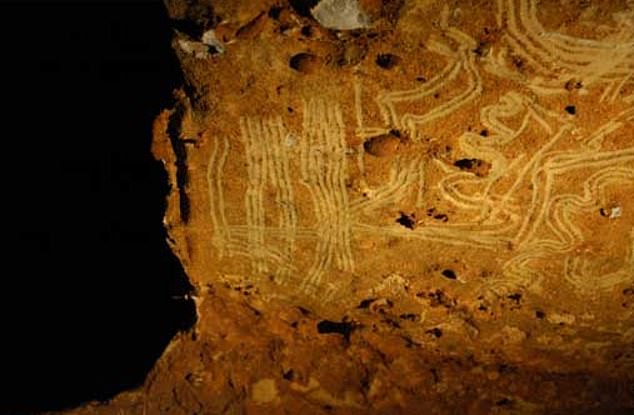 The paintings and engravings in Rouffignanc, in the Dordogne, which are around 2,400 feet (730 metres) from the entrance, are among those included 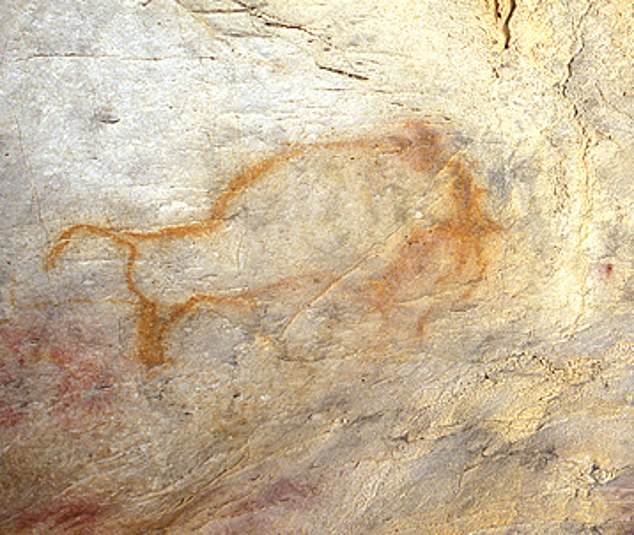 Also examined was the El Castillo cave in Cantabria, northern Spain. Depictions there, which include the world’s oldest known cave painting, were mostly in narrow passages around 660 feet (200 metres) from the entrance

Depictions there, which include the world’s oldest known cave painting, were mostly in narrow passages around 660 feet (200 metres) from the entrance.

The researchers’ models indicated oxygen in the artists’ bodies would have fallen rapidly at those depths and would have induced hypoxia.

The normal concentration of oxygen in the atmosphere is around 21 per cent, with the rest mostly being made up of nitrogen.

The models suggested the oxygen levels would fall below 18 per cent – the threshold for hypoxia – within 15 minutes.

In cases where there were ceilings lower than three feet (one metre), the experts’ simulations suggested levels would fall below 11 per cent within two hours, leading to severe hypoxia 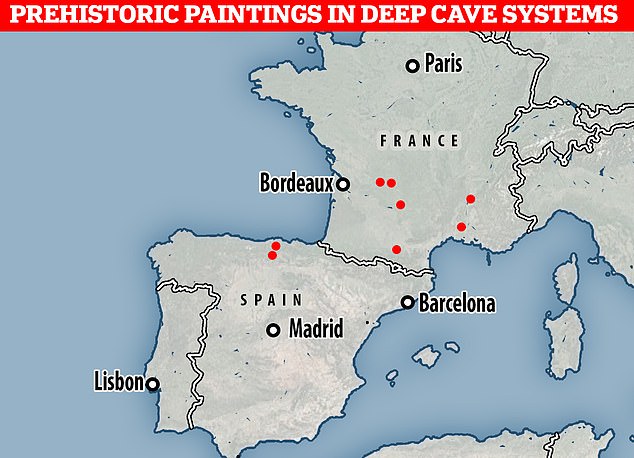 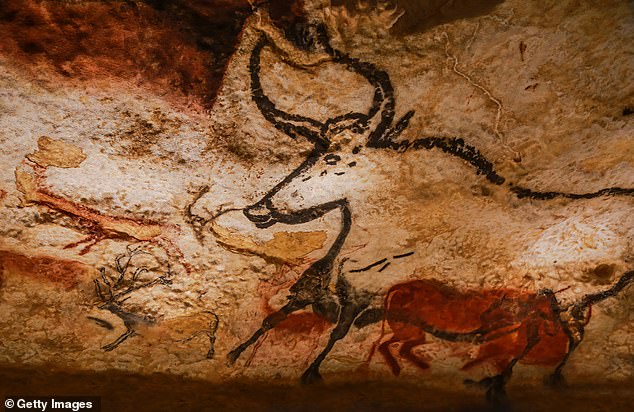 Lascaux Cave is a Palaeolithic cave situated in southwestern France, near the village of Montignac in the Dordogne region, which houses some of the most famous examples of prehistoric cave paintings 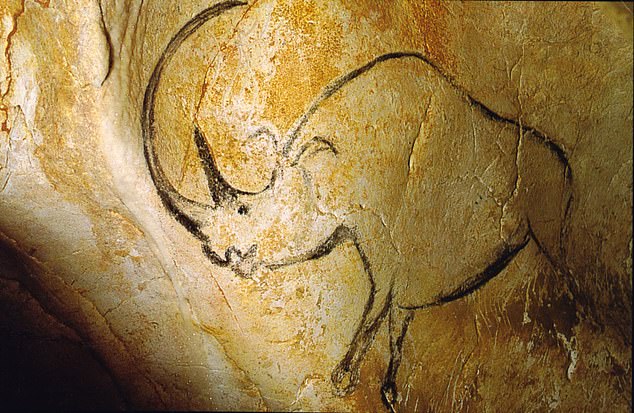 Cave paintings at Chauvet, at Pont D’Arc on the Ardeche river, Ardeche, France

The researchers noted how both hypoxia and environments such as deep caves increase the release of the neurotransmitter dopamine.

Hypoxia, which is potentially deadly, can result in hallucinations, feelings of euphoria and out-of-body sensations such as floating or flying.

The experts said that, in such a state, the art works on the cave walls may have appeared to float.

Ms Kedar and her co-authors suggested the paintings might have been a means of communicating with other-worldly entities.

Previous research has suggested that prehistoric people may have been disoriented by the environment of cave systems, leading them to produce cave art.

The Israeli study is the first to speculate about the possible role of deliberately-induced hypoxia in producing cave art.

The authors wrote: ‘In this paper, we showed that hypoxia… might indeed be a plausible trigger for the creation of cave depictions.

‘We moreover demonstrated that hypoxia might well be a plausible explanation for many of the depiction locations, which are far from the cave mouth and require passing through low, narrow passages.’