Prepare to be Kurosu-ed! The latest brilliant puzzle from Japan

You love sudokus, you can’t resist a crossword and you enjoy wrestling with the puzzles in the Mail’s weekday Coffee Break pullouts.

Now, we are bringing you a brilliant new daily challenge — Kurosu.

It’s from Japan, home of the delightfully fiendish pocket puzzle — and the concept is so simple to get the hang of, you’ll be hooked in seconds.

It has been 14 years since sudoku took the nation by storm, followed by your other Coffee Break puzzle favourites with a Japanese flavour: Hidato, Gogen, Kakuro and Kenken.

Kurosu (which means ‘cross’ in Japanese) is just as much fun — and as challenging. 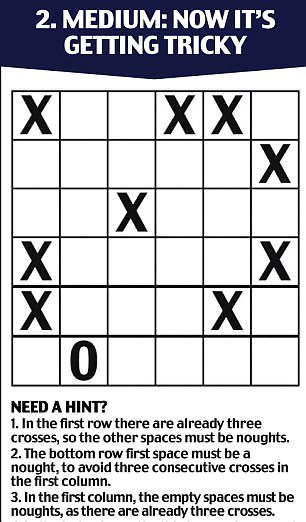 All you have to do is fill in the 6×6 grid with noughts and crosses, just like the old game of tic-tac-toe

All you have to do is fill in the 6×6 grid with noughts and crosses, just like the old game of tic-tac-toe.

But there is a big difference. The challenge is never to have more than two of each symbol next to each other in any row or column — and you must have three of each symbol in every row and column.

The Japanese are masters at creating these puzzles. As a nation they are not only highly educated and mathematically gifted but renowned for their delight in all things small, precise and neat — think of bonsai trees, elegant rock gardens and the neatly arranged grids of fish and rice in sushi boxes.

Japanese puzzles vary wildly, but they stick to the same general principles: a grid format, straightforward rules and a logical approach that means you solve them through simple, and not-so-simple, deduction. You never have to guess an answer or use trial and error. 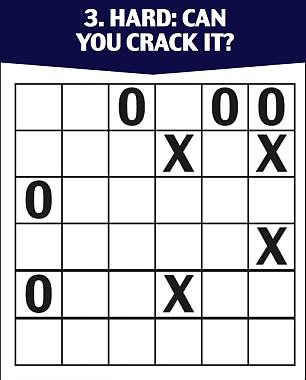 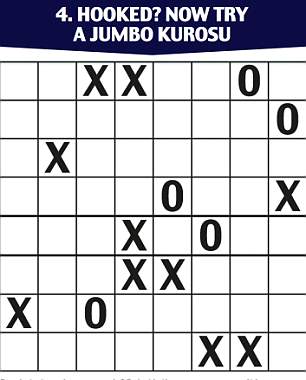 But there is a big difference. The challenge is never to have more than two of each symbol next to each other in any row or column — and you must have three of each symbol in every row and column

There are hundreds of puzzles, usually based on a square grid, which Japanese workers devour on their morning commutes.

Surprisingly, some of the greatest Japanese puzzles have actually been imports that were popularised and refined in Japan.

Sudoku was played in the U.S. in the Seventies, when it had the less exotic name of Number Place. It was picked up by a Japanese magazine and became wildly popular in Japan before taking off in Britain in 2004.

Kakuro, another popular Coffee Break number puzzle, was also invented in America with the dull name Cross Sums before being repackaged in Japan. 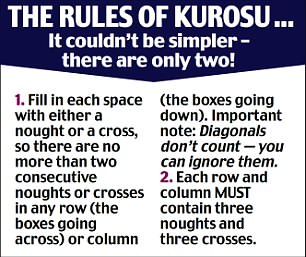 And the latest puzzle sensation, Kurosu, was invented in Europe — but the Japanese snapped it up and refined it, creating even more challenging variations.

Adolfo Zanellati, an Italian puzzle inventor, devised what he called Chaotic Disorder after a phrase he found in a translation of the Bible. A variation of the game, Marupeke, was invented in Japan in 2009. And now, as Kurosu, it has come to Britain.

Simply follow our clever tips, which will give you the key to unlocking the puzzles.

You can tackle 8×8 and 10×10 versions on Mail Plus, our tablet and smartphone digital edition.

More than 40,000 readers can already play 26 other puzzles on Mail Plus every day — so if you want more Kurosus, go to dailymailplus.co.uk for a free trial.

You’ll soon be on your way to becoming a Kurosu black belt.