President Joe Biden is set to unveil a massive spending proposal that includes $6 trillion in government funding for the next fiscal year – an amount that would bring federal spending up to levels not seen since World War II and send inflation even higher.

The budget would have the nation continue running deficits of more than $1 trillion, a level it already topped with the onset of the pandemic – with estimated annual deficits of $1.3 trillion amid enacted and proposed federal programs.

It shows the Biden administration’s desire to keep spending despite warnings from economists that it will keep driving up prices across America.

Taxes are also set to increase by $3trillion over the next decade in line with Biden’s proposed hikes in corporate rates and plans targeting Americans making more than $400,000-a-year.

The plan, which will be released in full on Friday, would seek major changes to the economy and welfare systems that have already been reflected in Biden’s $2.3trillion infrastructure proposal, $1.8trillion education and $1.5trillion in spending.

The spending levels would continue on an upward trajectory, hitting $8.2 trillion at the end of a decade, according to detailed top-line numbers that leaked to the New York Times.

Larry Summers, the former director of the National Economic Council for President Obama and a Clinton advisor issued a stark warning for Biden on Wednesday night and urged him to control his spending.

He told a CoinDesk conference: ‘We’re taking very substantial risks on the inflation side.

‘I think policy is rather overdoing it. The sense of serenity and complacency being projected by the economic policymakers, that this is all something that can easily be managed, is misplaced,’ he added.

Prices on everything from food to used cars and lumber have risen sharply since Biden took office and are set to increase.

The budget is Biden’s first chance to put his mark across-the government. The blueprint reflects some of the proposals he has already made – including a major infrastructure program that he first proposed at $2.3 trillion but now wants to trim to $1.7 trillion in an effort to secure GOP support in the Senate.

The big spending boost and ongoing deficits are certain to draw Republican opposition, although the deficit also rose each year Donald Trump was in office and spiked during the pandemic.

It comes among worries among investors about inflation as the government opens up spending to counter economic impacts of the pandemic.

Fed vice chair Richard Clarida helped sooth some of those concerns Wednesday when he expressed optimism the central bank could engineer a ‘soft landing’ if prices continue to rise. Concerns about inflation have sparked market swings in recent weeks.

The budget is merely a blueprint that each house of Congress will vote on, and will shape the spending bills that the House and Senate try to enact to make the programs reality.

According to the Times look at the budget, Biden’s proposed tax hikes on upper income earners would start bringing the deficit numbers down in the 2030s, at which point they would become fully effective.

The administration is forecasting a deficit of $1.8 trillion in 2022 amid an economic rebound and a series of coronavirus relief proposals that were enacted. 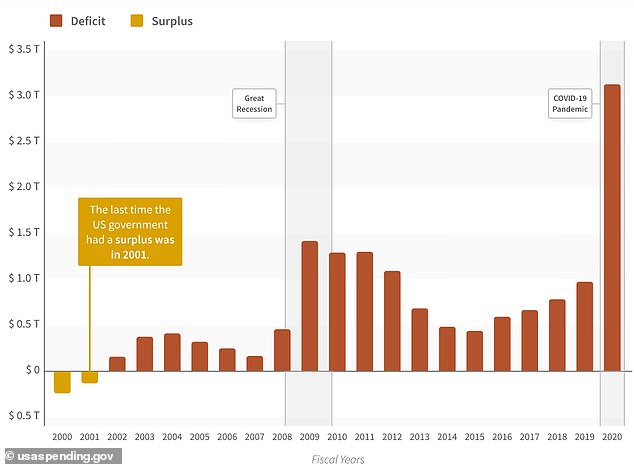 Annual deficits have been on the rise since 2015, with a big spike amid the pandemic 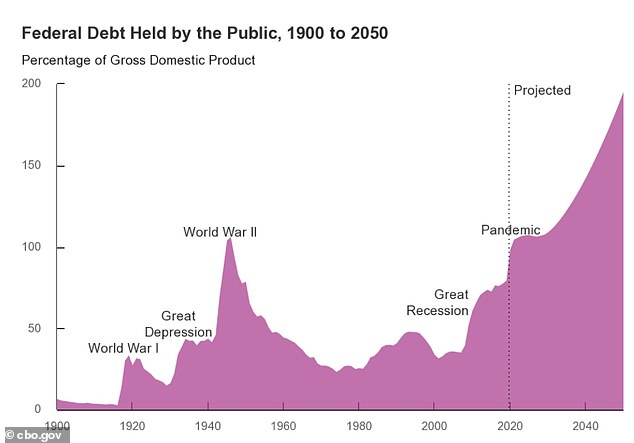 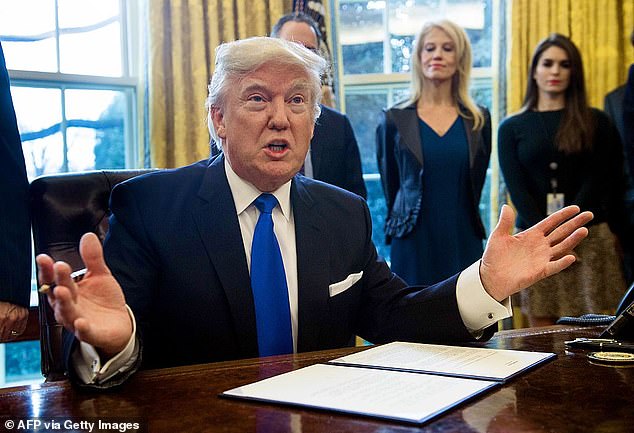 Former President Trump’s proposed budget for 2021 was $4.8 trillion, after years of consecutive increases in the deficit

Republican senators outlined a $928 billion infrastructure proposal Thursday, a counteroffer to President Joe Biden’s more sweeping plan as the two sides struggle to negotiate a bipartisan compromise and remain far apart on how to pay for the massive spending.

The Republican offer would increase spending by $91 billion on roads and bridges, $48 billion on water resources and $25 billion on airports, according to a one-page summary released by the GOP negotiators.

It also would provide for one-time increases in broadband investments, at $65 billion, and $22 billion on rail.

The Republican senators said their offer delivers on ‘core infrastructure investments’ that Biden has focused on as areas of potential bipartisan agreement.

Last week the Biden administration lowered Biden’s $2.3 trillion opening bid to $1.7 trillion. But the GOP insist this is still not enough.

In a memo to the White House, Republicans including Senators Capito, Barrasso, Blunt, Crapo, Toomey and Wicker said:  ‘We recognize that your most recent offer leaves us far apart and, coupled with your Memorial Day deadline, leaves little time to close the gap 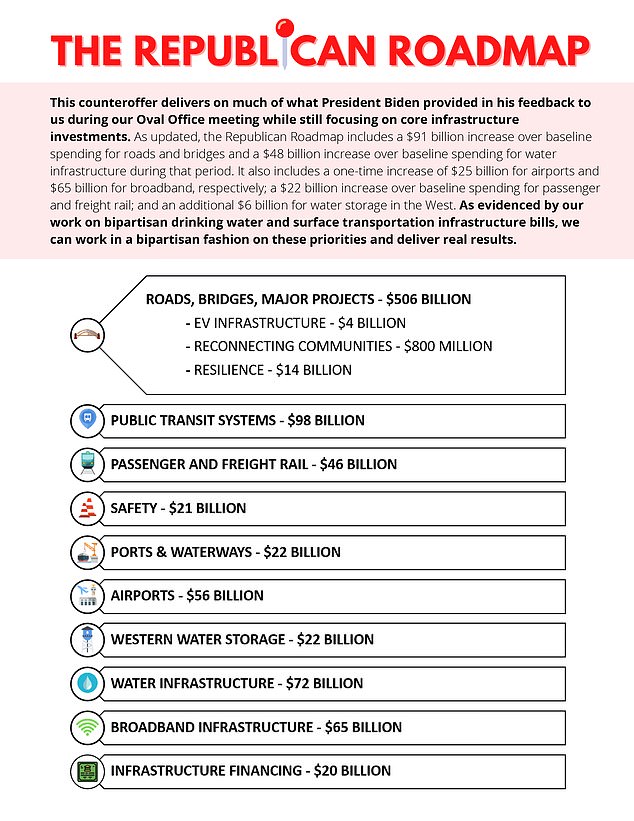 The Republican offer would increase spending by $91 billion on roads and bridges, $48 billion on water resources and $25 billion on airports, according to a one-page summary released by the GOP negotiators. It also would provide for one-time increases in broadband investments, at $65 billion, and $22 billion on rail 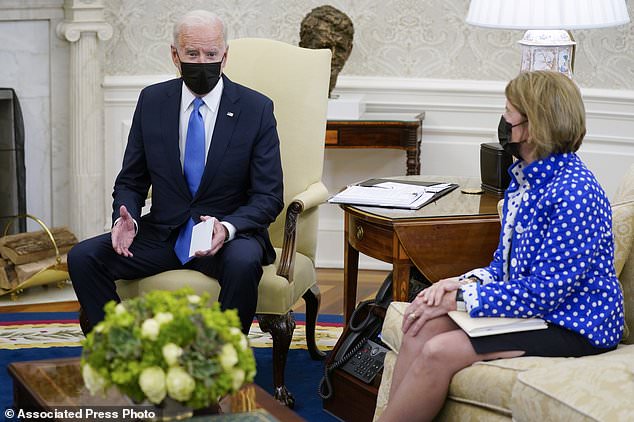 In earlier negotiations. Biden reduced his $2.3 trillion opening bid to $1.7 trillion. Capito is pictured meeting with Biden in the Oval Office on May 13

‘YOUR LATEST OFFER LEAVES US FAR APART’: THE GOP’S MEMO TO BIDEN ON INFRASTRUCTURE BILL

Thank you for meeting with our group on May 13th and for the subsequent meetings with members of your Cabinet and White House staff. We appreciate your willingness to find a path to address America’s infrastructure needs.

We recognize that your most recent offer leaves us far apart and, coupled with your Memorial Day deadline, leaves little time to close the gap. However, proceeding with reconciliation would undermine the good work we have done, and can continue to do, in a bipartisan manner. This week, the Senate took another significant step in moving forward with an infrastructure package. The Environment and Public Works Committee unanimously approved the bipartisan Surface Transportation Reauthorization Act of 2021 by a vote of 20 to 0. In addition, the Senate is currently working through a separate legislative package, the Endless Frontiers Act, which was included in your initial proposal.

When we recently met with you in the Oval Office, we discussed the parameters of an infrastructure package. Specifically, you expressed a funding target of at least $1 trillion over an eight-year period and that baseline funding levels could be included in that target. As a group, we were explicit that policies unrelated to physical infrastructure do not fit in this package. This is not because we do not value these important issues. We simply believe that these policies should be addressed in separate legislation that does not dilute our shared objective of passing this package. We can address these important issues separately without weakening our commitment to building America’s infrastructure. Furthermore, we made clear as a Conference we will not revisit the 2017 Tax Cuts and Jobs Act that provided the fastest economic growth in years, prior to the COVID-19 crisis.

We propose to offset the Roadmap with a combination of repurposed funding from previous COVID relief packages, user fees, and infrastructure financing. We agree with you that raising taxes on hardworking Americans, especially as we come out of a pandemic, is not an acceptable solution.

With regard to repurposing funding from previous COVID relief packages, the Department of Health and Human Services has already demonstrated the Administration’s willingness to repurpose billions of dollars Congress approved for testing and supplying the strategic stockpile, to address a completely unrelated matter on our southern border. We can identify funding from these packages that is no longer needed as we emerge from the pandemic, or that is not slated to be spent for several years – if at all. As an example, billions of dollars will not be spent by those states that decided to encourage workers to return to work by not paying out unemployment insurance.

We believe that we can reach a bipartisan agreement on infrastructure legislation that will move through regular order. We share your commitment to building an infrastructure system that can meet the needs of our nation. We look forward to continuing our discussions around this framework.