Brazillian president, Jair Bolsonaro, accused the French president today of portraying himself as ‘the one and only person’ concerned about the environment.

In criticising French leader Emmanuel Macron, Jair Bolsonaro extended a personal dispute that has sidelined a pledge of £16 million from the G7 nations to help protect the Amazon rainforest.

Amazon nations, excluding Venezuela, will meet in September ‘to come up with our own unified strategy for preserving the environment, and also for exploration sustainable in our region,’ Bolsonaro said after meeting Chilean president Sebastian Pinera in Brasilia, the Brazilian capital.

Brazil’s President Jair Bolsonaro (pictured left) can be seen meeting Chile’s President Sebastian Pinera at the Alvorada Palace in Brasilia, Brazil on Wednesday. Bolsonaro accused Macron of portraying himself as the only person concerned with the environment. There will be a meeting of Latin American nations in September to come up with plans to mange the Amazon fires 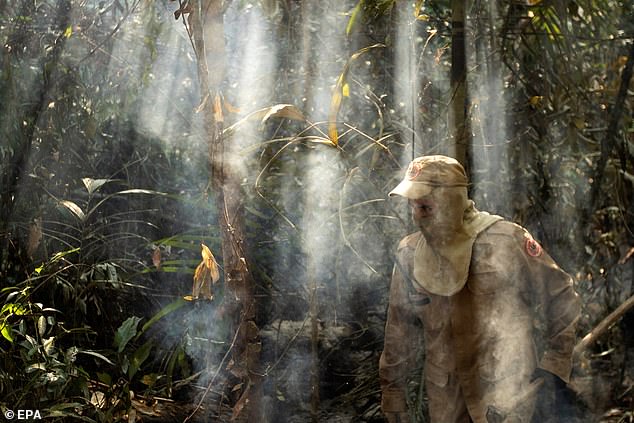 A fireman dressed in protective clothing, pictured above, can be seen with an axe working to extinguish some of the worst fires to hit the Amazon over recent years. Bolsonaro sent military units from seven states, including Hercules C-130 aircrafts to douse the fire from the sky

He also announced that he had accepted four planes from Chile to help fight Amazon fires.

According to the Chilean president, countries that the Amazon covers ‘have sovereignty over the Amazon, that needs to be recognised always.’

About 60 per cent of the Amazon region is in Brazil.

Lingering smoke in the Amazon, meanwhile, is reportedly causing increased respiratory problems – particularly among children and the elderly – as fires in the region rage.

‘The kids are affected the most. They’re coughing a lot,’ said Elane Diaz, a nurse in the Rondonia state capital of Porto Velho. 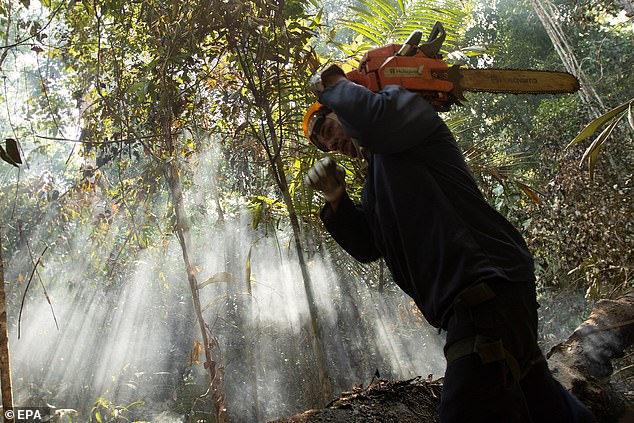 The government of Brazil has deployed 40,000 military personnel to the Amazon region to confront the fires which are tearing through the country. A fireman can be seen working to extinguish a fire at a forest near Porto Velho, Brazil on Wednesday 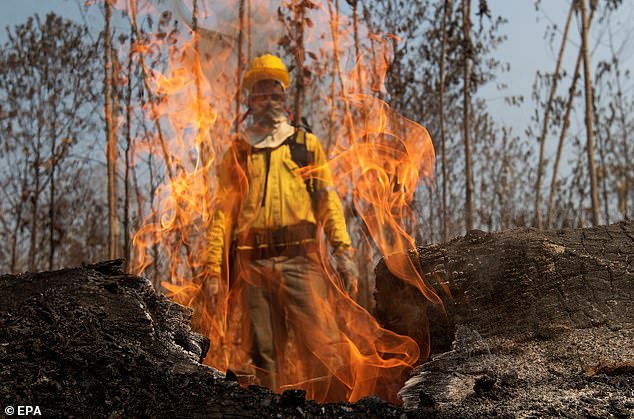 A fireman can be seen through a flame burning its way through wood. According to a BBC analysis, the rise in fires in the Amazon correlates with a sharp decline in fines for environmental violations in Brazil

Fears over health impacts have been growing with the surge in fires, with more than 83,000 blazes documented by the country’s National Space Research Institute since the start of the year.

That’s a 77 per cent increase over the same period last year. About half of the fires occurred in the Amazon region, with most in the past month.

But the issue has been overshadowed by growing acrimony between Brazil and European countries seeking to help fight Amazon fires in a region seen as vital to the health of the planet.

At a summit in France this week, G7 nations pledged 20 million dollars for the effort, with a separate £10 million from Britain.

Bolsonaro said on Wednesday that Brazil is willing to accept ‘bilateral’ offers of aid. 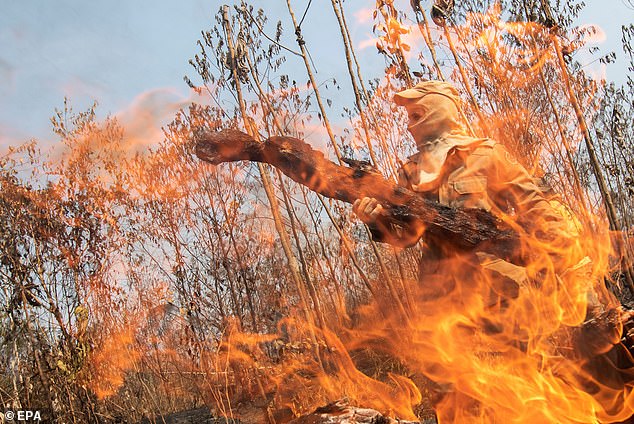 Neighbouring Bolivia has also been affected by the fires raging through the Amazon. Where President Bolsonaro declined the offer of aid, Bolivia’s President Evo Morales took a break from his election campaign to deal with the fires and welcomed international assistance 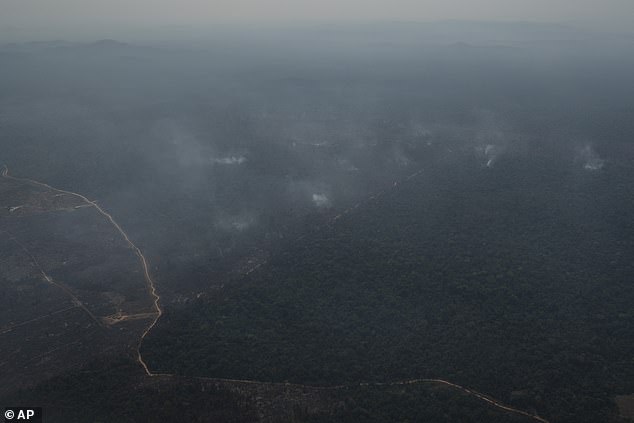 Smoke can be seen rising from burning fires in Altamira, Para State, Brazil. Bolsonara said that he has accepted four planes from Chile to fight the fires 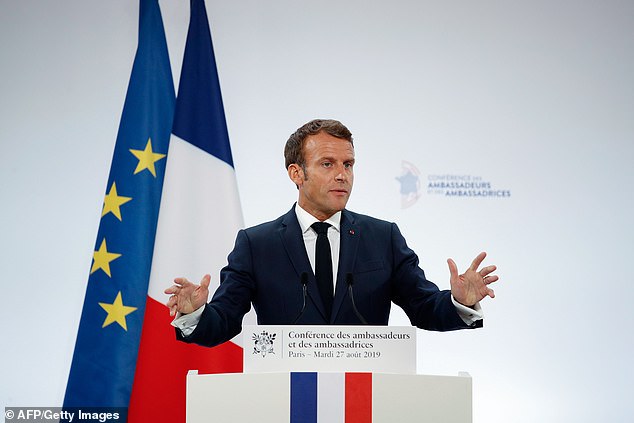 French President Emmanuel Macron, pictured above, accused Bolsonaro of ‘lying’ about climate change.  The Brazillian president said that he would not accept the G7’s £16 million aid package for firefighter planes unless the French president offered him an apology

But the president, who took office this year with a promise to boost development in Latin America’s biggest economy, has suggested the offers of international aid mask a plot to exploit the Amazon’s resources and weaken Brazilian growth.

He raised those complaints again at the meeting with Chile’s president, accusing Germany and France of trying to ‘buy’ the sovereignty of Brazil.

Macron has said Brazil’s sovereignty must be respected, while he and other European leaders say a global approach is needed to preserve the Amazon.