President Donald Trump and and House Speaker Paul Ryan were seen watching over a wedding at the Mar-a-Lago on Sunday.

Trump was seen pointing during the wedding that featured a giant archway with white feathers and red accents.

Women in simple yet elegant gold dresses stood underneath the archway in anticipation for the bride. 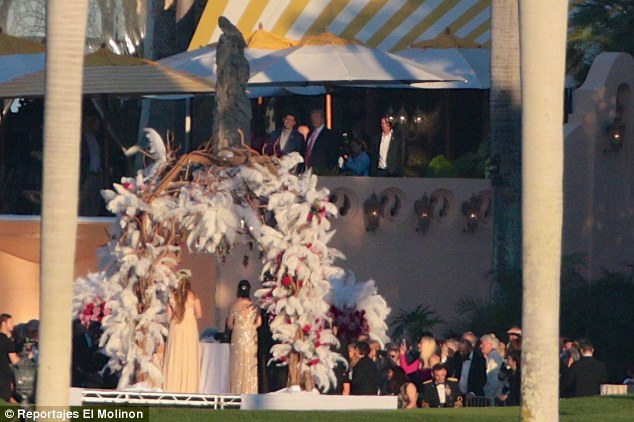 The two were meeting Sunday afternoon to discuss Trump’s legislative agenda and potentially talk about immigration.

Ryan and Trump have been working more closely with each other, as of late.

The House Speaker rallied behind the Trump-Nunes position, justifying it on civil liberties ground.

It has been a busy weekend for Trump at Mar-a-Lago, where he often conducts business outside of the White House. 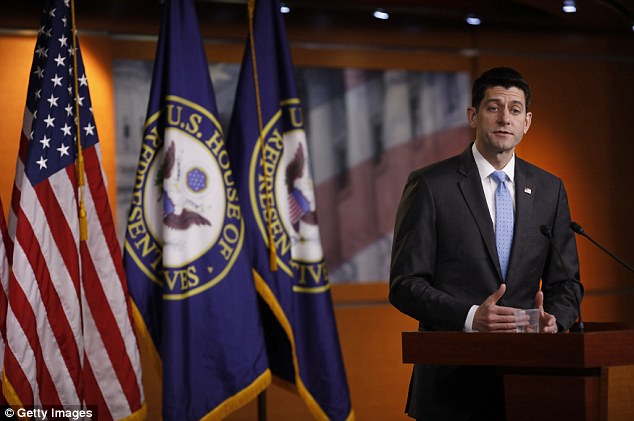 The House Speaker rallied behind Trump-Nunes position, justifying it on civil liberties ground

The president was seen smiling alongside two pretty blondes and giving another big thumbs to cameras while visiting his Mar-a-Lago resort in Palm Beach, Florida on Saturday night.

First Lady Melania was seemingly a no-show, at least for the photos, amid talk that Trump had another affair during their marriage. This time, with Karen McDougal, an ex-Playboy Playmate.

The Saturday engagement was an Orphan’s Promise charity event, according to one of the women’s Instagram posts. She wrote: ‘Tonight at #Maralago @realdonaldtrump @orphanspromise.’ 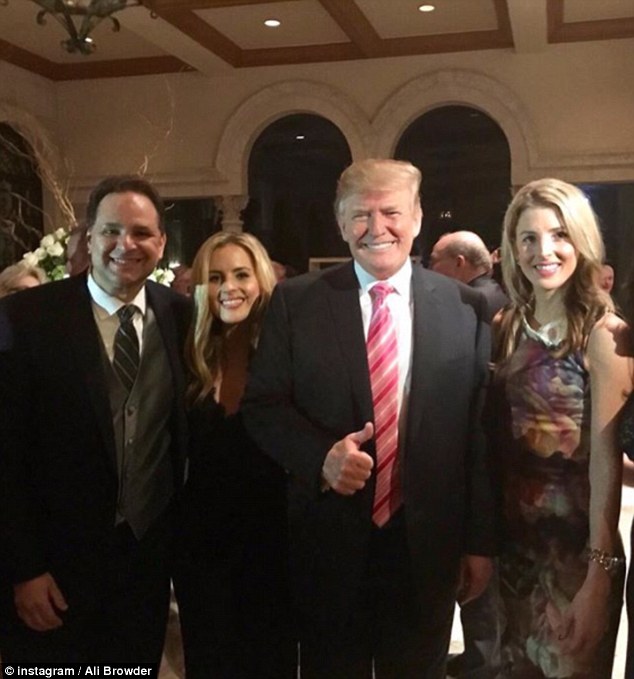 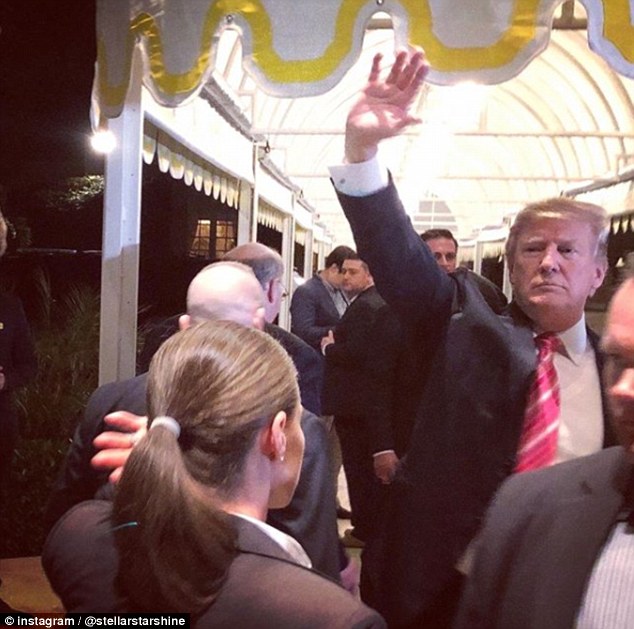 Orphan’s Promise is an organization that works to serve orphaned children and also creates opportunities for them and their families.

The president’s appearance followed his Friday hospital visit to victims and families of the Marjory Stoneman Douglas High School shooting.

Trump took to Twitter late Friday night to post photos from the hospital and share a message about the most recent tragedy that shook the nation.

‘Our entire Nation, w/one heavy heart, continues to pray for the victims & their families in Parkland, FL. To teachers, law enforcement, first responders & medical professionals who responded so bravely in the face of danger: We THANK YOU for your courage!,’ he wrote. 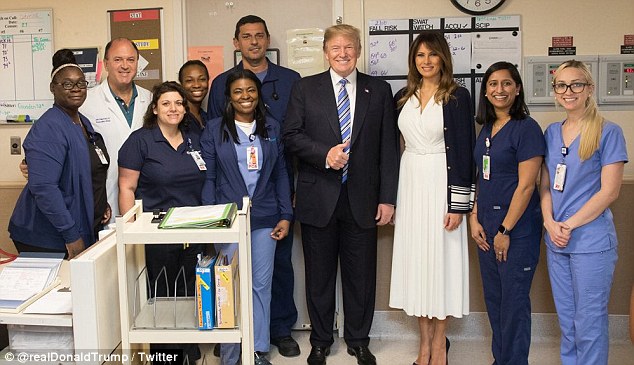 Trump is pictured giving cameras another thumbs and while smiling next to doctors, nurses and his wife 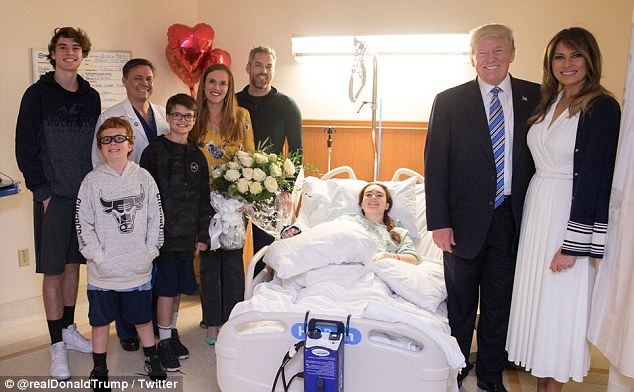 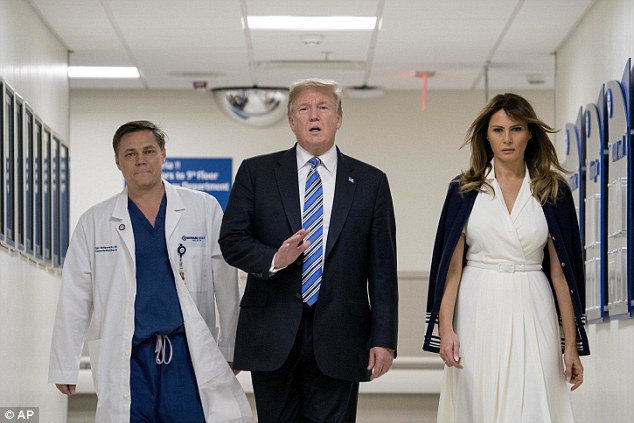 ‘It’s very sad something like that could happen but the job the doctors did, the nurses, the hospital… first responders, law enforcement, really incredible,’ Trump told reporters 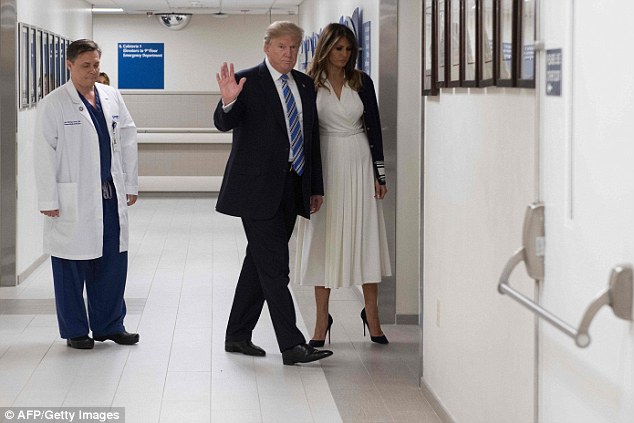 When one of the reporters questioned Trump about whether he thought America’s gun policy needed to be changed, he walked away without response

While in the hospital, the president was seen grinning and giving the thumbs up as he stood alongside doctors, nurses, shooting victims and wife Melania.

He was heard speaking to reporters outside of the hospital rooms about the impressive job the staff has done.

‘The job they have done is incredible… and I want to congratulate you. Incredible job,’ he was heard telling Broward Health North Hospital trauma surgeon, Dr. Igor Nichiporenko.

‘It’s very sad something like that could happen but the job the doctors did, the nurses, the hospital… first responders, law enforcement, really incredible,’ he went on to say. 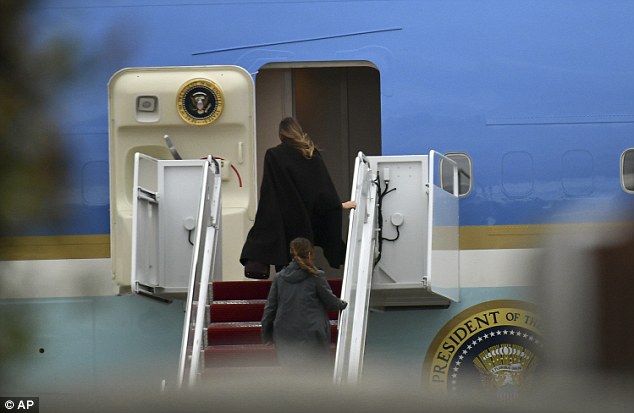 ‘The speed they got the victims over to the hospital was a record… in one case 20 minutes and in one case, 19 minutes.’

When one of the reporters questioned Trump about whether he thought America’s gun policy needed to be changed, he walked away without response.

He later took to his Twitter page to gush about the visit.

‘Melania and I met such incredible people last night in Broward County, Florida. Will never forget them, or the evening!,’ he added.

President Trump and First Lady Melania reportedly departed the hospital in a motorcade around 7.15pm, according to a pool log by a New York Times reporter.

Earlier in the day, Melania was seen boarding Air Force One by her herself before the pair departed to Florida amid affair claims.