Pret A Manger has rapidly become the corporate emblem of ghost town Britain. With the majority of workers still not back in offices, the sandwich and coffee giant is routinely used as an example of the type of business at risk of disappearing altogether.

That was no more apparent than in late August when Pret announced 2,890 redundancies and 28 shop closures due to the freefall in its central London trade.

But chief executive Pano Christou says Pret cannot simply wait for offices to fill up again: the company has to change – not its customers.

To prove the point, he reveals Pret has ditched its corporate mantra of ‘Follow the Skyscraper’ – and replaced it with a new one: ‘Follow the Customer.’

‘If you focus on waiting for things to get back to normal, as far as I’m concerned, you’re dead,’ says Christou. ‘We are telling our staff, do not focus on when people come back to offices, focus on where our customers are.

‘Yes, workers will be in offices less frequently, but we have a great brand and a great product. We need to look at how customer behaviour is changing, and how we can adapt our business model to that.’

Christou is aware of the urgency of the task before him, with sales in Pret’s 367 high street shops still as much as 60 per cent lower than a year ago.

He recently gave his leadership team a copy of Endurance – an account of explorer Sir Ernest Shackleton’s 1914 Antarctic expedition – as they start the slog to turn Pret, an ‘urban, London-centric’ brand, into a more diverse business that students will use to order sandwiches from their phones.

Delivery sales up tenfold since Covid

Christou says he started the shift before the crisis, but Covid has accelerated the change, with his team making decisions on evolving the business ‘day to day, and week to week’.

‘The pace of activity is unlike anything I have seen in 20 years,’ he says. ‘We need to act fast, and any time taken up dwelling on the past is time wasted.’

On Tuesday, Pret will launch its YourPret Barista subscription coffee service giving customers up to five coffees a day for a £20 per month fee.

Next month, Pret will start selling bags of coffee in Waitrose and it plans to launch a range of pre-packaged food in other major retailers in the new year.

The chain is also building up its delivery business through Deliveroo, Uber Eats and Just Eat, and has opened its first ‘dark kitchen’ – which cooks for delivery only – in Colindale, North London.

It plans to open between five and ten further sites that will make food for its delivery partners.

Christou says: ‘Delivery sales have grown tenfold since Covid and continues to have double-digit growth week on week.’

Lives: Grew up in Tooting but now lives in Coulsdon.

Career: Spent five years at McDonald’s, then joined Pret as an assistant manager in the Carnaby Street branch aged 22. Became managing director of Pret UK in 2014 and chief executive in September 2019. 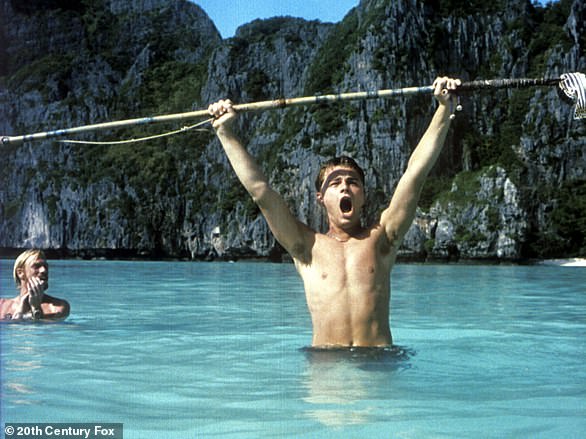 Holiday: Ibiza and El Palmar, near Cadiz in Spain, where his wife Vanessa’s family are from.

Hobbies: Watching football, cycling, going to the gym and eating out with his family.

Film: The Beach, starring Leonardo DiCaprio, above, from 2000 which inspired Christou to go travelling around South East Asia.

The firm is also trialling a scheme popular in the US, where offices have ‘Pret Office Drops’ that allow workers to order food through an app and collect it from Pret shelving installed in their office.

Landlords in the UK, such as the owners of business parks in Berkshire towns Bracknell and Reading, are keen to introduce the scheme, Christou says.

There are also plans to put QR codes on shops’ fridges so customers can pay for their food by scanning their phones.

‘We want to reach everyone, wherever they are,’ says Christou. ‘The plan for Pret now is how do we evolve this brand to become a multi-channel business – whether we are providing lunches for office workers, for people working at home, or students learning online.’

Pret still generates around two- thirds of its sales in London but plans to open more branches in the suburbs. It is also developing a hot dinner menu to deliver meals to people’s homes.

Christou says its high street shops will remain important, but will account for a smaller share of profits in the future.

We’ll expand where the customers are

‘For the last three years we have been growing faster outside London,’ he says.

‘In five years’ time I’d like to think we’d have more shops than today – but as a multi-channel business, the composition of our business will be very different. If we could get to a third to 50 per cent of our revenue coming from off-premises, I think that would be a triumph.’

He adds: ‘We’ll expand where the customers are, but that could be expanding in the physical sense of shops, or working more collaboratively with other brands and other businesses.’

In the summer, Christou said Pret was in the ‘eye of the storm’ over rents for its shops, and paid just 30 per cent of its June to September rent bill. Despite two landlords giving rent relief – saving two shops from closure – negotiations remain fraught. Christou is unsure how much rent it will pay this quarter.

‘We don’t know,’ he says, sounding weary. ‘We have had many, many negotiations and I have met many landlords. In all honesty I have been heartened by the support of many of the landlords.

‘But there are still a few burying their heads in the sand, which is unfortunate.’ 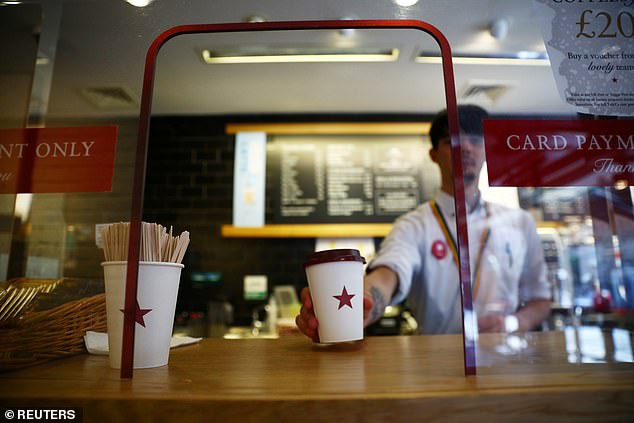 He says the Government should extend the lease forfeiture moratorium beyond the end of this month ‘as a minimum’, and says more support on rents is needed. ‘Landlords are hurting as well, and I want to work with them to help both of us get through this.’

Pret has used part of a €100million (£89million) loan facility agreed with its lenders and is running its shops more efficiently, with a slimmed-down menu and shorter opening hours.

Its owner, the Luxembourg-based investment firm JAB Holding, is supportive. ‘They are long-term investors so they know transforming businesses takes time,’ says Christou.

‘When things have been tough, our teams have been fantastic at operating our stores in a much stronger fashion on lower sales.’

If you work hard, you will be rewarded

Christou has worked at Pret for 20 years, starting on the shop floor making sandwiches and coffees.

He went to the same school as London Mayor Sadiq Khan – Ernest Bevin College in Tooting – then horrified his parents by dropping out of Kingston College aged 17 to work as a supervisor at McDonald’s in Wandsworth.

He says he still ‘pinches himself’ that he is now running the company. ‘I am a big believer that if you work hard you will be rewarded. I know how it is for the people who work in our kitchens and serve our customers because I have been there, I’ve done it.’

He adds: ‘I was very keen when I took over to give Pret a younger, more progressive appeal. I look at my background, and where I have come from, and I want Pret to have that broader appeal.

‘We are moving into an age where collaboration, and where you can grow value together, is much more important than saying we’ll do it ourselves. I think that’s a very old-fashioned way of doing business.’