Chip Colquhoun, 34, from Cambridge, has written an open letter to Pret’s CEO Clive Schlee to say he should have heeded his warning six years ago

A Pret a Manger customer who had an allergic reaction at a branch in 2012 claims the firm could have saved a 15-year-old girl who died after eating a baguette but ‘didn’t want stores looking like stationery outlets’ with ‘excessive labelling’.

Chip Colquhoun, 34, from Cambridge, has written an open letter to Pret’s CEO Clive Schlee to say he should have heeded his warning six years ago.

The chain was criticised by a London coroner on Friday at the inquest of Natasha Ednan-Laperouse, who died of anaphylaxis on a British Airways flight in 2016 after biting into a Pret sandwich containing sesame.

The coroner ruled that Pret’s allergy labelling was ‘inadequate’ and announced plans to make a report to Environment Secretary Michael Gove over whether large businesses should be able to benefit from regulations that allow reduced food labelling for products made in shops.

Mr Colquhoun, who has a shellfish allergy, claimed that when he urged CEO Clive Schlee to put labels on Pret’s food the chief executive reportedly told him that he wouldn’t sanction adding labels because he didn’t want the restaurants looking like stationery outlets.

Mr Schlee allegedly made the remarks to Mr Colquhoun in March 2012, after Mr Colquhoun’s throat closed up at a Cambridge Pret.

Mr Colquhoun claimed he ate an unlabelled wrap containing prawn that was sitting on a shelf that read ‘avocado salad wrap (vegetarian)’.

A Pret spokesman said: ‘We are very sorry for Chip’s experience, and will be contacting him to apologise. We have made improvements to the way we provide allergen information, and we know there is much more to do.’ 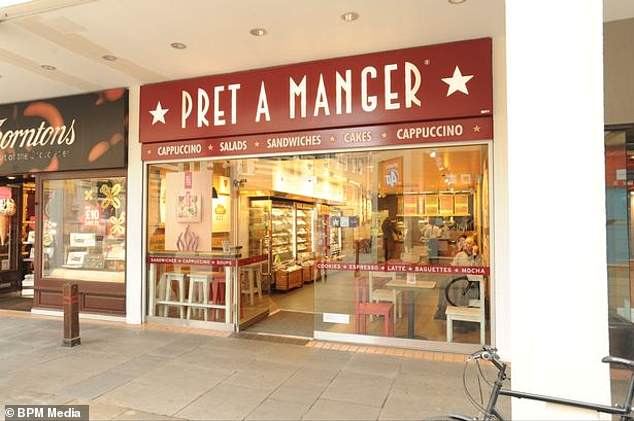 Mr Schlee allegedly refused to add more labels to sandwiches in March 2012, after Mr Colquhoun’s throat closed up at a Cambridge Pret (pictured)

Mr Schlee, Pret CEO, made the following statement on Friday after the coroner’s ruling: ‘We are deeply sorry for Natasha’s death. We cannot begin to comprehend the pain her family have gone through and the grief they continue to feel.

‘We have heard everything the Coroner and Natasha’s family have said this week. And we will learn from this.

‘All of us at Pret want to see meaningful change come from this tragedy. We will make sure that it does.’

Mr Colquhoun said he was left feeling patronised by the store manager when he raised his concerns about the dangers of the chain’s allergy labelling, so he escalated his complaint. He was later contacted by Mr Schlee.

‘I wrote him a complaint via the website and eventually I got connected with Clive [Schlee, CEO],’ he said.

‘He asked to speak to me on the phone and what he said to me was that their policy was that they weren’t going to put labels on their food because it slowed everything down.’

Mr Colquhoun said from their conversation he got the impression that, ‘it was more important to be efficient as part of the Pret experience than really be that concerned about health and safety.’

‘I said to him on the phone ‘there are so many cafes, restaurants and bakeries and things where the people just scribble out what the item is and stick it on – how can that possibly be a bad thing to do’?’

Mr Colquhoun claimed that Mr Schlee said he was concerned more labels would make Pret look like a stationery outlet and that they produce their food fresh in the shop.

He claims he was eventually offered a ‘box of wine’ by way of compensation.

Mr Colquhoun said he was stunned by the offer but let the matter go. He said he agreed on compensation in the form of a food donation to Cambridge homeless shelter Jimmy’s and boycotted the high street chain.

After hearing about the ruling into the death of Natasha Ednan-Laperouse, Mr Colquhoun was prompted to write again to the CEO and contact the press to raise his concerns. 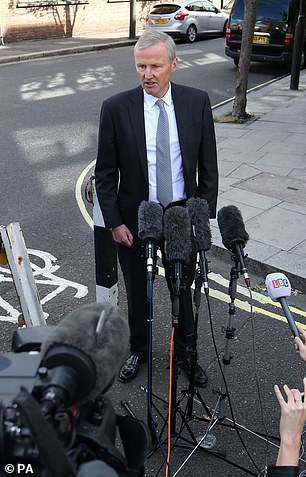 Mr Schlee, speaks to the press outside West London Coroners Court on Friday, following the conclusion of the inquest into the death of Natasha Ednan-Laperouse

‘They were quite fortunate nothing happened to me that day, it could have done and lo and behold five years later it does and it is much worse.

‘I sent it as an open message to let people know they could have learned their lesson.’

Mr Colquhoun emailed the letter to Mr Schlee and members of the press on September 28, 2018. It includes part of an email Mr Schlee sent to him in 2012 after he informed him of his allergic reaction.

The letter reads in part: ‘Clive, I’ve only just heard about Natasha Ednan-Laperouse’s death following coverage of the inquest.

‘What sickens me is that you could have prevented it – because almost exactly the same thing happened to me FIVE YEARS BEFORE SHE DIED. Do you remember? Perhaps your email to me below will jog your memory.

‘I’m the guy whose throat began closing around a prawn inside a wrap, bought from your Cambridge branch where that wrap had mistakenly found itself behind a vegetarian shelf label. I told the manager at the time, ‘I could have died!’ His patronising response was, ‘Aw… But you didn’t, did you.’

In the letter Mr Colquhoun said Mr Schlee apologised to him. Mr Colquhoun also repeats his claim that Mr Schlee’s response included a comment about Pret looking like a stationery outlet if they added labels on their food.

The letter continues: ‘I warned you. I told you it was ridiculous to prioritise stationery costs over health and safety. You clearly didn’t listen.

‘Now this poor girl has actually died after suffering almost the exact same fault that I experienced, I really truly hope you will learn this time – even if that means your reckless chain gets taken off our streets.’

‘The baguette was manufactured to Pret specifications and contained sesame to which she was allergic.

‘There was no specific allergen information on the baguette packaging or on the (food display cabinet) and Natasha was reassured by that.’