Pretty in peach! The Queen looks stylish at church in Sandringham

The country may still be blanketed in a dusting of snow but the Queen looked like she was ready to usher in the spring in a pretty peach ensemble this morning.

The brilliant blue sky above St Peter and St Paul church in West Newton, close to the Sandringham estate, belied the chilly temperatures as Her Majesty, 92, attended the traditional Sunday Morning church service.

Donning a warm-looking but stylish peach woollen coat with a matching hat – with feather detail – the Queen stopped to smile at well-wishers.

She was greeted by a crowd of around 200 people as she arrived in her maroon coloured Bentley at the West Newton church on her 20,000 acre Sandringham estate.

Sunny but brisk! The Queen smiles as a group of local schoolchildren greet her at the entrance to St Peter and St Paul church in West Newton this morning. Some 200 well-wishers turned out to greet the monarch in spite of the chilly weather 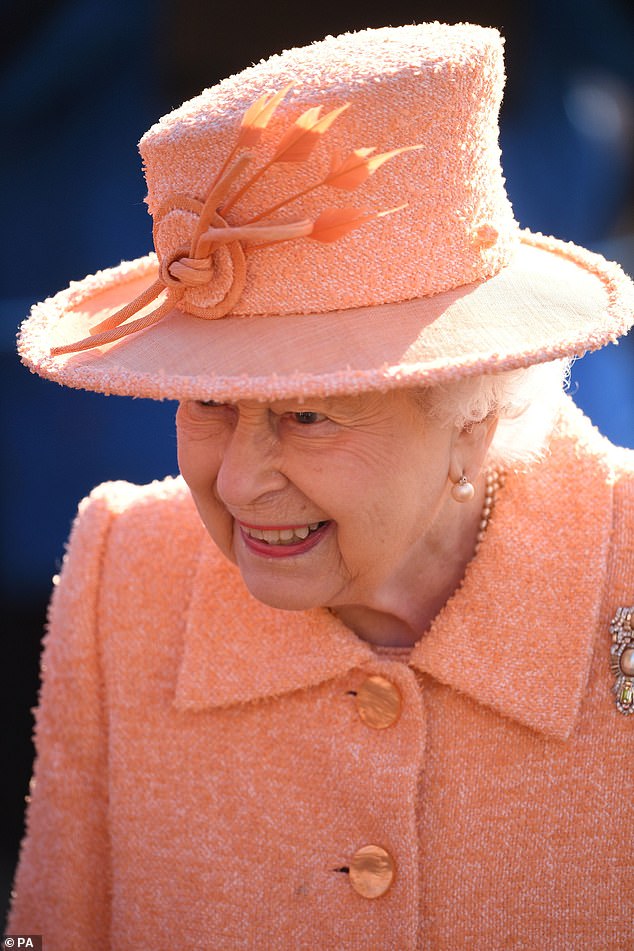 The Queen looked in bright spirits; wearing the stylish peach ensemble that included a matching hat, skirt and coat. On her coat, she wore a diamond-encrusted brooch and finished her look with a three-string of pearls and pearl earrings 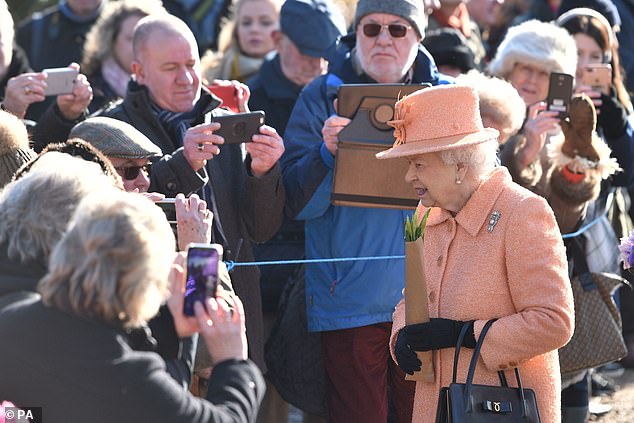 Smart phones at the ready: The Queen takes a bunch of daffodils from a member of the public gathered outside the church, as the monarch faces a slew of camera phones 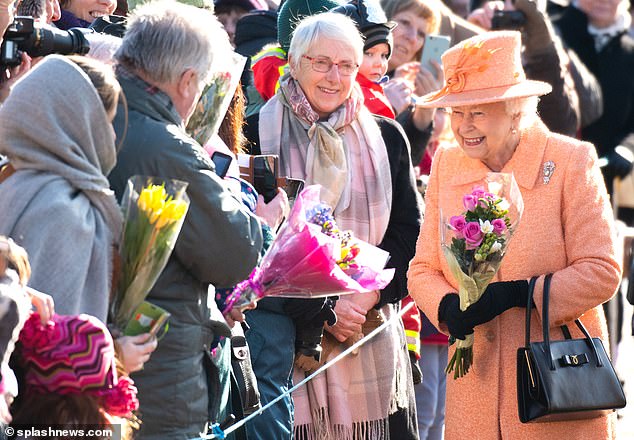 It’s not winter, honest! Braving the cold, the Queen was presented with dozens of pretty blooms as she made her way through the crowds 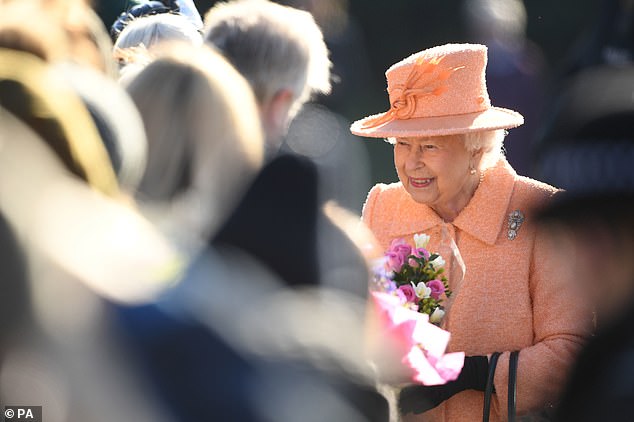 After the daffs came more colourful blooms, the Queen smiles as she’s handed a posy of pink and white flowers from a well-wisher 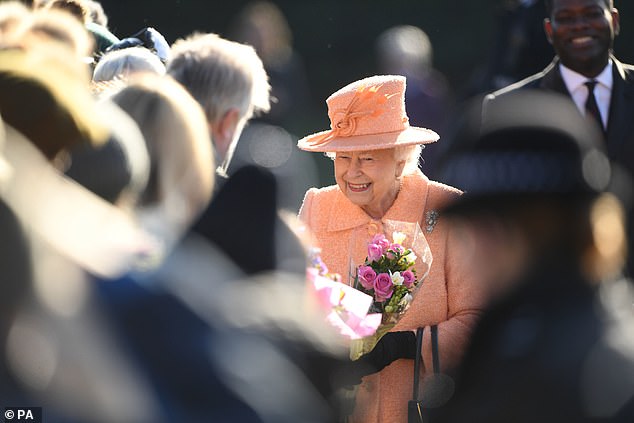 Warm welcome: The Queen appeared to be in jolly mood as she chatted to her people at the church’s entrance

Wearing her favoured black loafers with buckle detail, she accessorised with black gloves and a smart black leather handbag.

The Queen looked fit and well as she walked unaided up the 80 yard path of the 14th century church, accompanied by Sandringham rector, the Jonathan Riviere.

While the weather at Sandringham has hovered around the freezing mark all week, the mercury did rise to around 3 degrees Celsius today.

Many were brandishing smart phones, taking snaps of the monarch shortly after she arrived. One bystander handed her a bunch of daffodils, suggesting the change in seasons really is on its way.

Afterwards, the Queen walked to the neighbouring West Newton village hall, pausing to accept flowers from children and Royal fans.

All the bouquets were handed by a Queen to a lady in waiting before being passed to a policewoman and left outside the village hall. 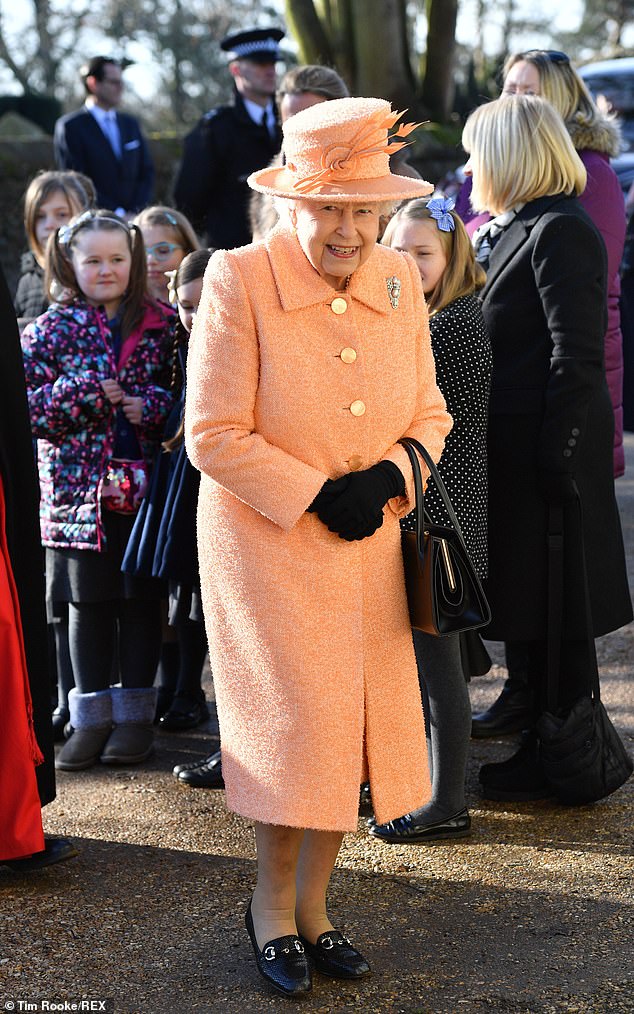 Regal surprise: The youngsters looked delighted to be in the company of the Queen as they waited patiently at the gates of the church, close to Sandringham 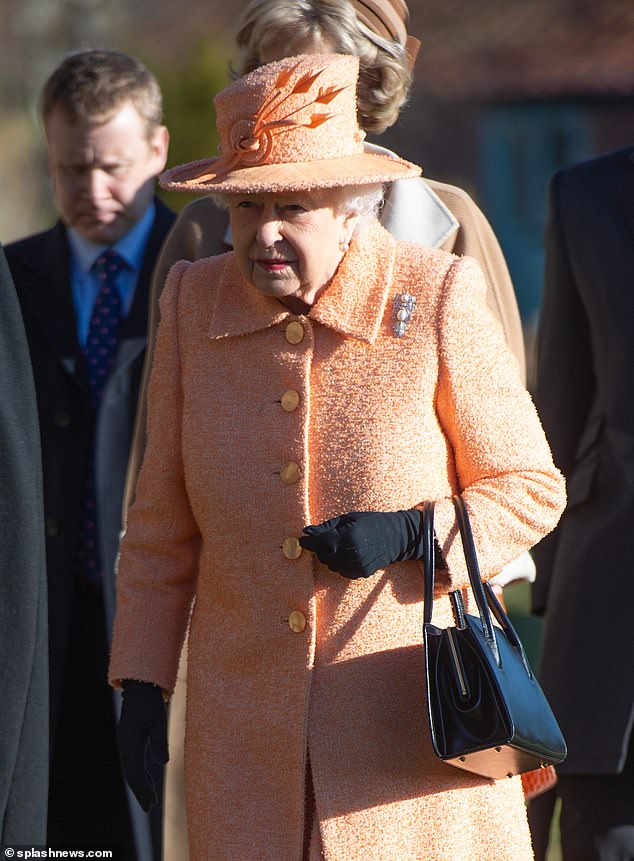 After the short service, the Queen walked to the neighbouring West Newton village hall, pausing to accept flowers from children and Royal fans. 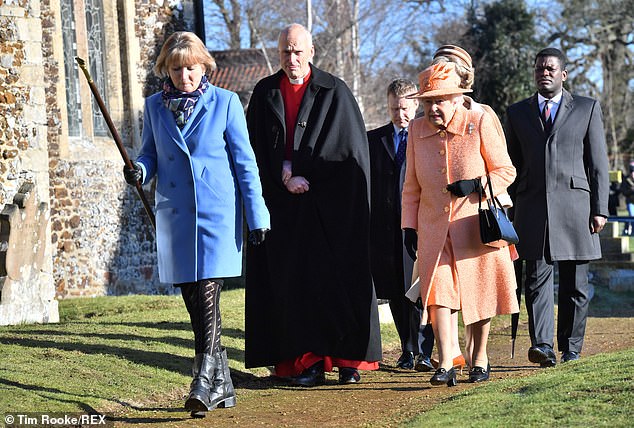 Led by the clergy at West Newton church close to the Sandringham estate, the Queen looked ready for a change in seasons as she donned a pretty peach ensemble this morning. The Queen walked alongside Sandringham rector Jonathan Riviere 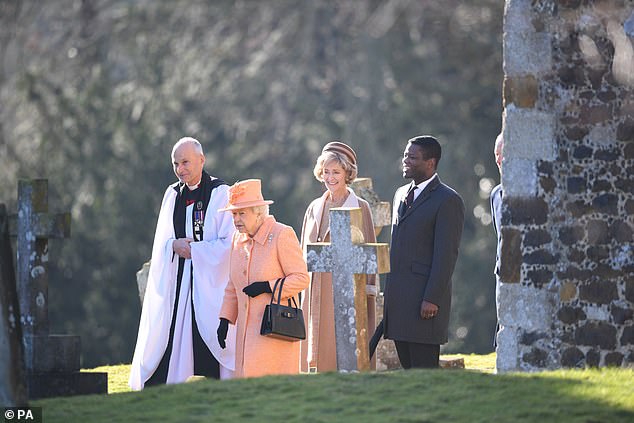 The spring weather brought out broad smiles, with the Queen’s entourage – including close protection officers – enjoying the Sunday morning outing 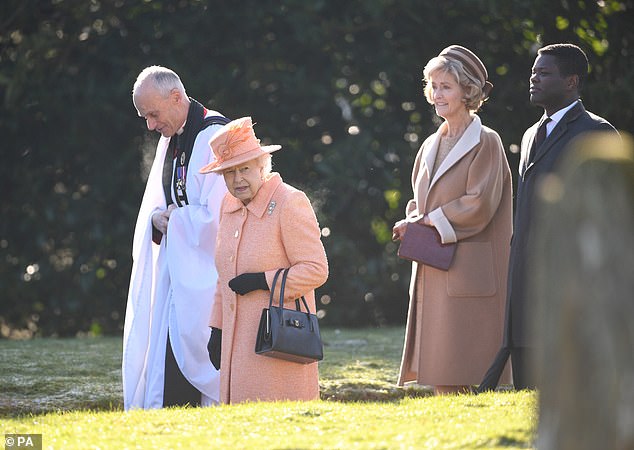 With a hat that perfectly co-ordinated with her woolen coat and dress, the Queen finished her church attire with her favoured black loafers with buckle detail and a smart black handbag 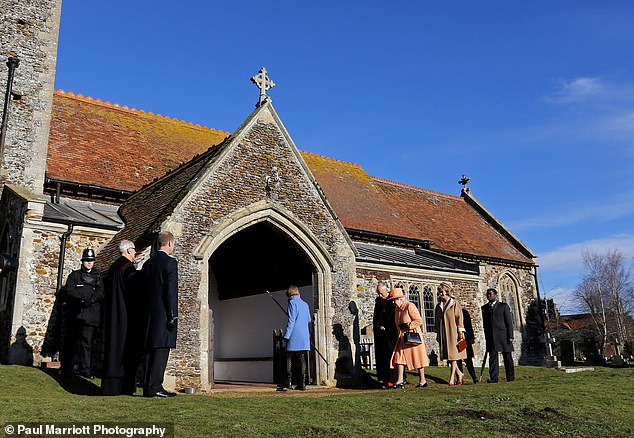 The 92-year-old will have welcomed the bright blue skies after a wintry week in Norfolk, where the Queen has been residing. Prince Philip did not attend the church service 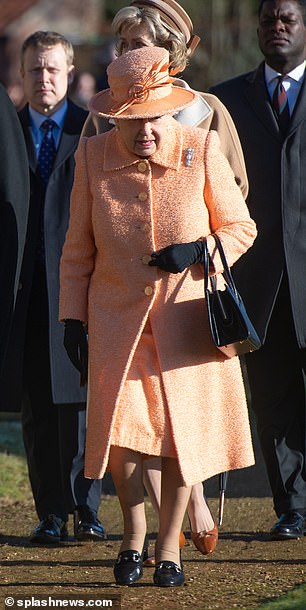 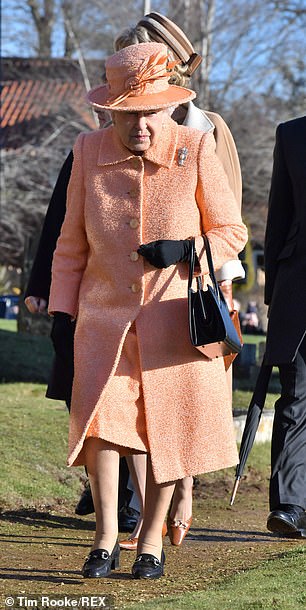 Flanked by close protection officers, the Queen makes her way to church. The monarch attended the service alone, with Prince Philip, 97, not attending

The Queen disclosed to one member of the crowd how her racehorse Estimate which won the Ascot Gold Cup in 2013 was in foal for the third time.

Hilary Marsh, 66, struck up a conversation with the Queen, saying how she had been coming to see her at Sandringham for 40 years and admired the statue of Estimate which was erected outside Sandringham House in 2016.

Mrs Marsh of Burwell, Suffolk, who was with her husband Brian, 70, said: “The Queen told me that Estimate was in foal at her stud farm in Sandringham and was due any day.

“Everyone knows that the Queen loves her horses so I hope she gets a chance to see the foal before she goes back to London. She seemed quite excited about it.”

The Queen also stopped to speak to six-year-old Freddie Reinhold of Rougham, Norfolk, who told her, “I’ve got a Lego Gem”, referring to the pirate treasure chest jewel accessories in the range of building bricks.

She looked as if she understood what he was saying and smiled as she replied: “That’s nice.”

The Queen also accepted orange and white roses from Evelina Curtis, four, of Syderstone, Norfolk, and Edie Freear, three, of nearby South Wootton. 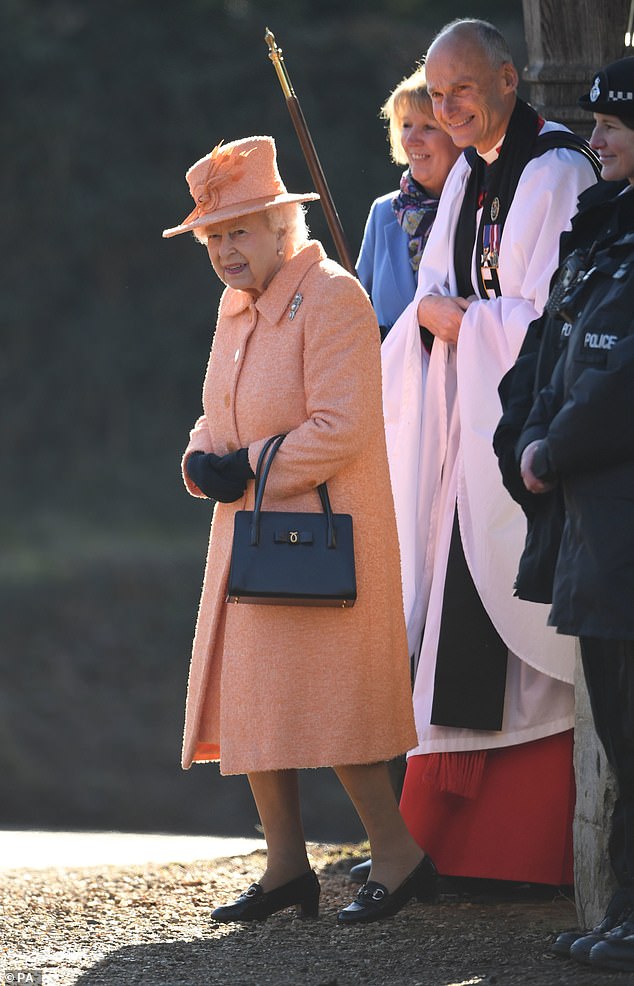 All smiles: The Queen, members of the clergy and a police officer beam as the Queen stops for a moment at the church’s entrance 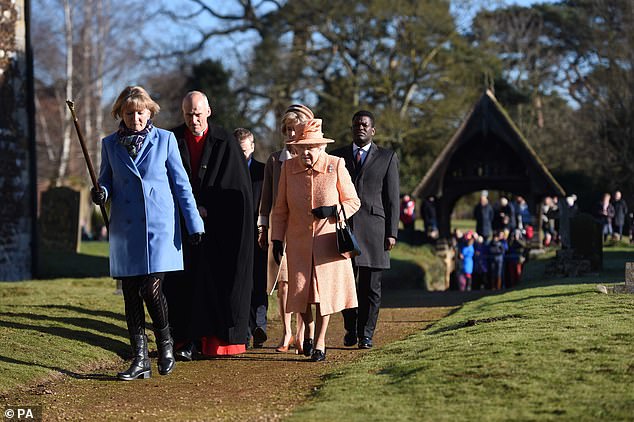 At least the snow has melted: The Queen looked sure-footed as she negotiated the rural pathways; Norfolk has been hit by icy weather this week 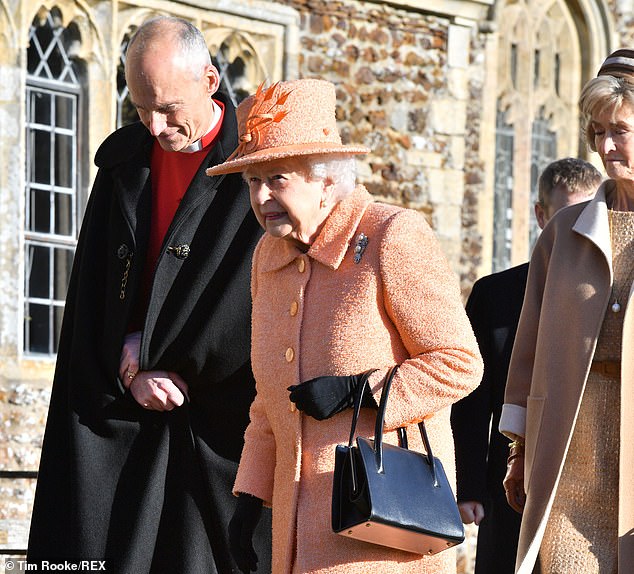 The Queen, attending without fellow family members, chatted to the clergy of the church as she made her way up West Newton’s gravel path this morning 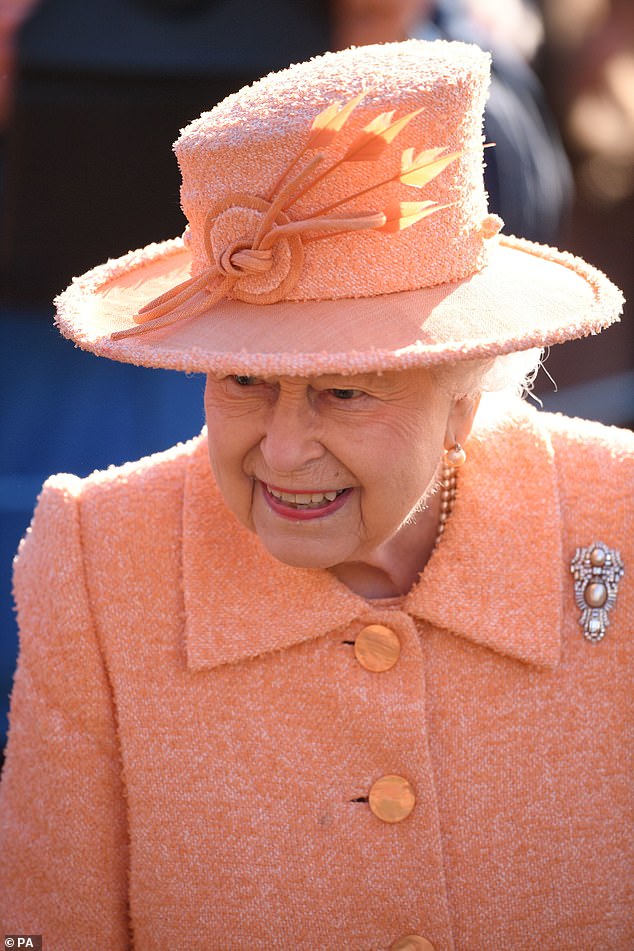 The Queen’s wide-brimmed hat, thought to be made by her favoured designer Angela Kelly, kept the sun from her eyes on a bright day in Norfolk 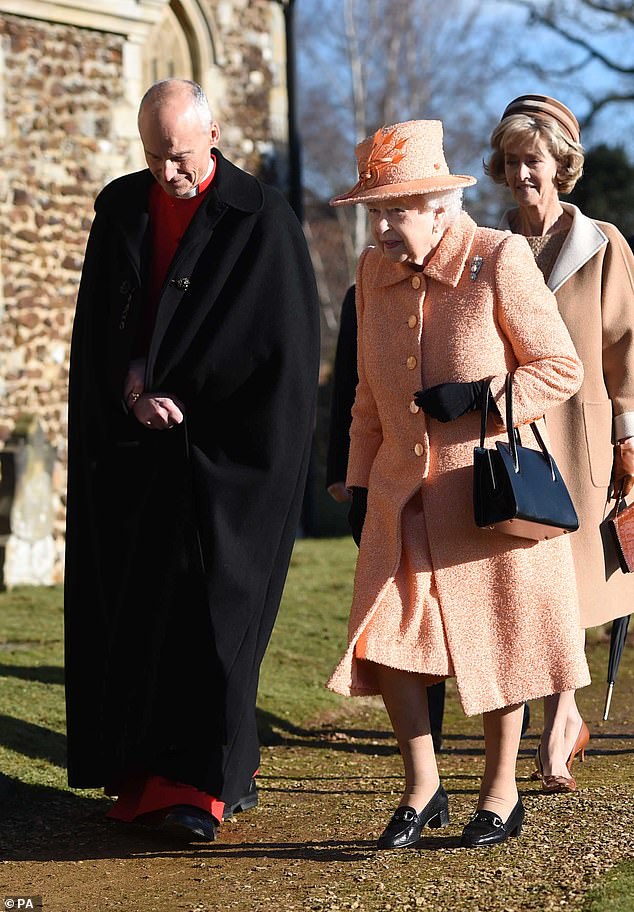 While the Queen is often accompanied by members of the royal family at Sunday church services, she attended the service alone today

Edie’s grandmother Maggie Anderson, 67, of South Wootton, said: “By coincidence the flowers were luckily the same colour as the Queen’s outfit.

“She said, ‘Thank you so much, they match’ which was nice. It made our day.”

An Italian care worker who only gave her name as Silvia, 21, from Verona, also earned herself a smile from the Queen when she wished her a “Good morning” and “Buongiorno” in her native tongue.

The Queen asked if she was visiting and Silvia explained that she was working as a carer for people with learning disabilities in King’s Lynn.

The Queen spoke to regular Royal watcher Julie McCarthy-Fox, 54, of Horsham, West Sussex, asking her: “Are you frozen, standing out here?” You are quite well covered up”. 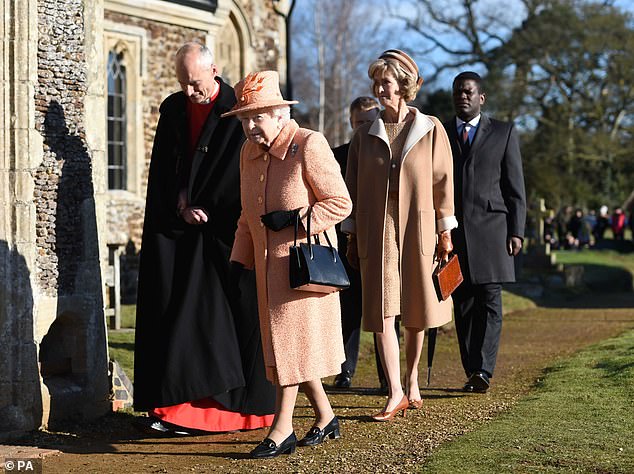 Striding forth: The Queen glances at photographers as she makes her way into the building 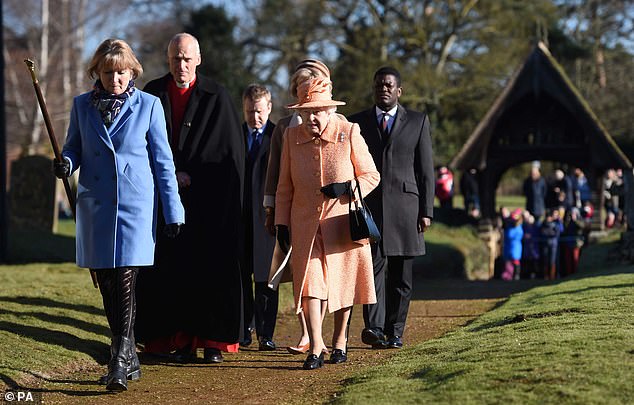 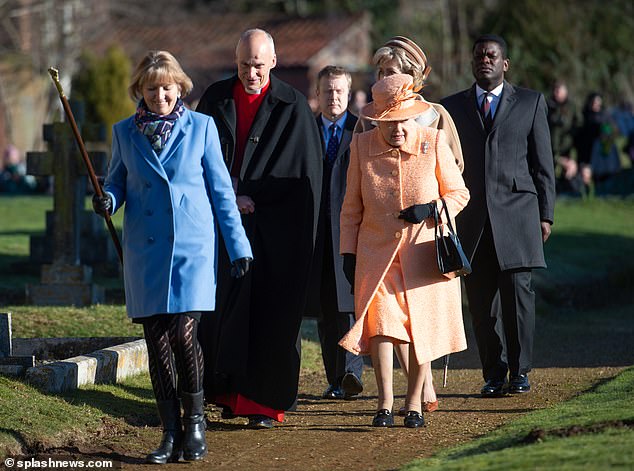 Holding a staff, the leading church member appeared to smile as she watched her step on the wintry path

She also talked to veteran Royal watcher Mary Relph, asking how she was because she knew she had been ill.

Mrs Relph of Shouldham, Norfolk, who has been following the Royal family for more than 70 years, said: “I asked her if she had enjoyed her stay in Norfolk and she said, ‘Very much so’.”

The Queen spent ten minutes after the service in the village hall, chatting to the Sunday School children who had been presented with bibles and Narnia books at their annual prizegiving.

The 92-year-old will have welcomed the bright blue skies after a wintry week in Norfolk, where the Queen has been residing. Prince Philip did not attend the church service.

The Duke of Edinburgh, who is officially retired from public duties, has kept a lower profile since his accident in January, which saw him collide with an oncoming vehicle after being ‘dazzled’ by the bright sunshine.

The accident happened as Philip pulled out of a side road on to the 60mph limit A149 road. His Land Rover collided with a Kia car, sending his vehicle tumbling across the road where it ended up on its side.

Last week, the monarch was seen enjoying a shoot with some close friends on the the Sandringham estate.

Joined by her daughter Princess Anne and her husband Tim Laurence, the 92-year-old led the way, using a walking stick to negotiate the rough terrain.

Prince Philip did not attend. However, racing legend Sir Jackie Stewart was among the shooting party, and is well known for being a keen marksmen.

The 79-year-old was a prize-winning member of the Scottish clay pigeon shooting team before he became a racing driver and competed in the UK and abroad.