The penny’s days, it seems, are numbered. The coin’s origins go back to Roman times but the Bank of England has intimated that it wants to scrap the penny because more than half are only used once.

The bank’s other argument is that if it were scrapped and retailers rounded up prices to the nearest 5p, it would create hardly any inflation — just 0.07 per cent.

In honour of this coin which has become part of our everyday life and British culture — with phrases such ‘a penny for your thoughts’ and ‘spend a penny’ — HARRY MOUNT tells its story . . .

Pennies last, on average, for more than 40 years, according to the Royal Mint, which monitors how many are damaged or lost.

Some, though, keep going for longer. Pre-decimalisation (until 1971), pennies were still in circulation that dated back to the 1860s in Victoria’s reign.

In a tradition that ended years ago, babies born on the same day as a future monarch were given a silver penny struck with the year of their birth. This was seen as a way of wishing them health — and wealth — for their whole life.

Under the Coinage Act 1971, the 1p coin is legal tender for amounts only up to 20p. So shopkeepers don’t have to accept the sale if you offer 21 pennies or more. An Essex mother, Laura Pulley, fell foul of this law when she wasn’t allowed on a bus because she tried to pay the 60p fare in 1p and 2p coins. (The 20p limit applies to 2p pieces, too). Three years earlier, in 2012, an accountant sued a difficult client who tried to pay an £804 debt in coppers — and won.

According to the Royal Mint, there are 11.278 billion pennies in circulation and 6.557 billion 2ps.

Millions of pounds-worth of pennies must be lying down the back of sofas or stashed in piggy banks — but not as much as the estimated £169 million of old pound coins believed still to be abandoned there .

Production of 1p and 2p coins by the Royal Mint has fallen sharply, with 288 million minted in 2016-17 compared with around 500 million the year before. Even so, that’s still more than nine pennies made every second. 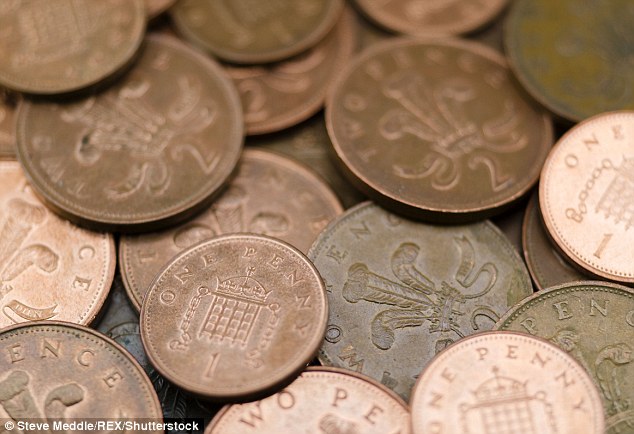 Pennies last, on average, for more than 40 years, according to the Royal Mint, which monitors how many are damaged or lost

Since 1975, all British coins have been made at the Royal Mint in Llantrisant, Wales. Previously, the Mint was in the City of London — originally at the Tower of London. The words ‘mint’ and ‘money’ come from the Roman goddess, Juno Moneta, the divine protector of money.

The pre-decimal penny was originally minted in silver and got smaller as silver’s price rose. When silver became too expensive, in 1797, pennies began to be minted in copper by Matthew Boulton at his Soho Mint, Birmingham. A penny’s worth of copper was in each coin, which was significantly bigger than its silver predecessors. Because of their thick rims, they were called ‘cartwheels’. After 1860, the penny was minted in bronze (97 per cent copper, 2.5 per cent zinc and 0.5 per cent tin).

At the start of decimalisation in 1971, the new penny was one of three new copper coins, along with the half-penny and the 2p piece. To avoid confusion with the old coins, all had the word ‘NEW’. This was removed in 1982.

In the early-Nineties, copper prices soared — making bronze too expensive. Indeed, the coins were worth up to 1.5p — more than the value of the coin itself. Scrap dealers could make money by illegally melting them down. So, in 1992, the first copper-plated steel pennies were introduced. The steel core makes them magnetic. For security reasons, the Royal Mint won’t disclose today how much it costs to make a penny. 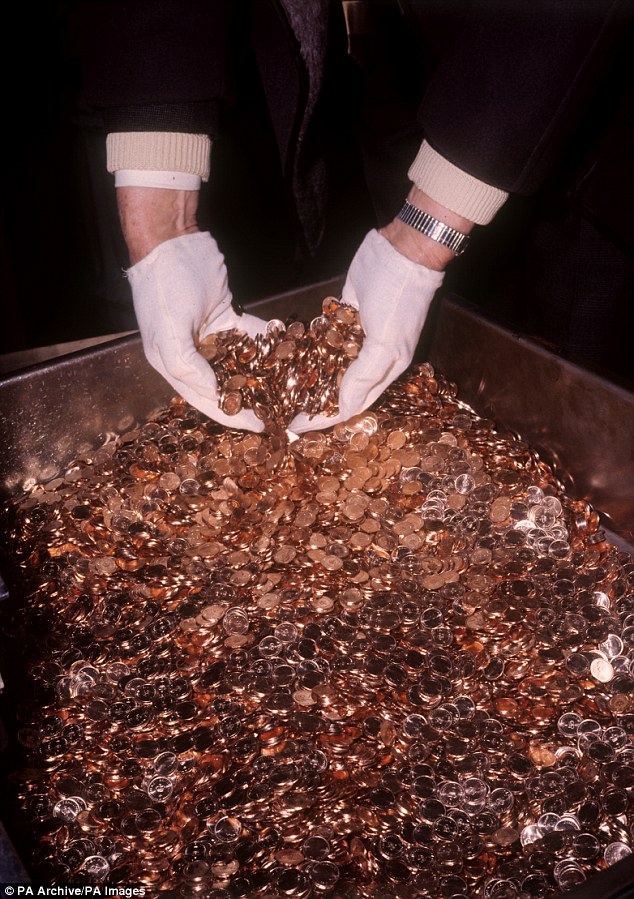 The Bank of England’s says if the penny were scrapped and retailers rounded up prices to the nearest 5p, it would create hardly any inflation — just 0.07 per cent

The ‘reverse’ side has had two designers: Christopher Ironside (from 1971 to 2008) and Matthew Dent (from 2008 to date). Dent’s penny features a fragment of the Royal Shield. When placed together with the 2p, 5p, 10p, 20p and 50p coins, the penny’s design completes the full shield. The earlier Ironside design (right) was a version of the Badge of Henry VII, now the Badge of the Palace of Westminster: a crowned portcullis with chains.

On all pennies since 1971, the inscription is ELIZABETH II D.G.REG.F.D. plus the year the coin was minted. The initials are short for Dei Gratia Regina Fidei Defensatrix — Latin for ‘Elizabeth II, by the grace of God, Queen and Defender of the Faith’. 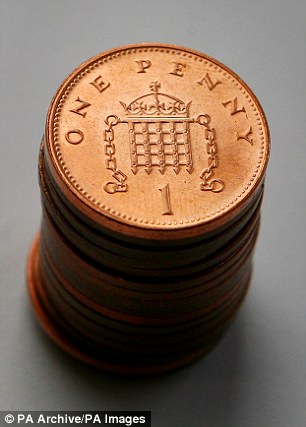 Since 1975, all British coins have been made at the Royal Mint in Llantrisant, Wales

When referring to a group of the coins, it’s right to call them ‘pennies’. But when talking about them in monetary terms, they’re called ‘pence’ — as in ‘two pounds and 30 pence’. To say ‘one p’ is regarded as poor English — it should be one penny.

There were 240 pre-decimal pennies to the pound, with 12 pennies to a shilling and 20 shillings to a pound.

The pre-decimal penny was abbreviated to ‘d’ (as in 1d, 2d etc). The ‘d’ was taken from the Roman silver coin, the denarius — from the Latin ‘deni’ (‘containing ten’), because there were ten asses (another Roman coin) to the denarius.

The ‘d’ combined to make ‘L.S.D.’. The L. stood for libra, Latin for ‘pound’, as in weight — which is where we get our pounds from, both in weight and currency. The S. stood for solidus, a Roman gold coin.

Edward VIII was on the throne for such a short time before he abdicated in 1936 that only a few Edward VIII pennies exist. In fact, they are so-called pattern coins, produced to receive official approval. They are dated 1937, the year after the Abdication. They show the king’s preferred left profile — breaking the convention that monarchs changed the direction of the previous monarch. Edward VIII’s vanity is thought to have brought bad luck and, in turn, the Abdication.

The British penny was introduced by Offa, King of Mercia, in the mid-8th century AD. They were called denarii, after the Romans practice.

Anglo-Saxon silver pennies had considerable buying power, the equivalent of £20 today. Back then, five pennies could buy a sheep, ten pennies a pig, 20 a cow and 30 an ox.

The value of the penny has been driven down by inflation. A pre-decimal penny’s buying power was equivalent to 6p today. In 1951, it would be worth 13p today. In 1901, a penny was worth the equivalent of 46p today. 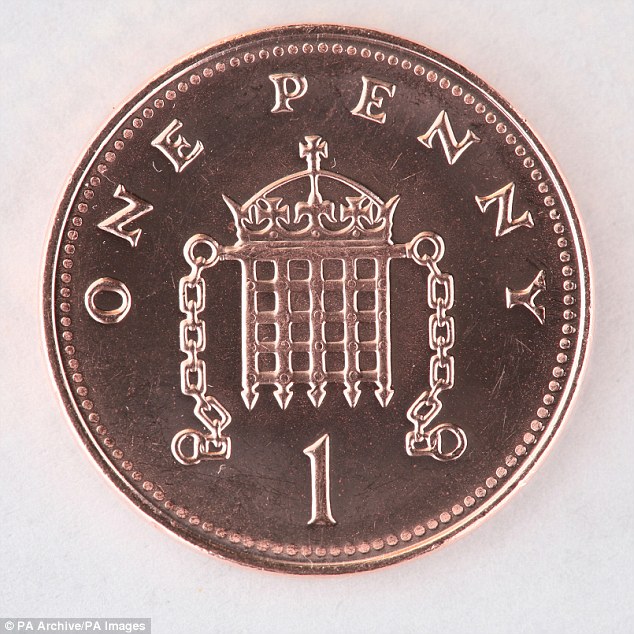 In New Zealand, they stopped making their cent and two-cent pieces in 1990. Many retailers rounded down prices to the nearest 5c as a gesture of goodwill

In the Sixties, a cigarette could be bought for a penny. In 1840, a stamp — the Penny Black — could be purchased for a penny. These days, a strip of six Penny Blacks can sell for £250,000 and a second-class stamp costs 56p.

The penny and a ‘pennyworth’ are mentioned 15 times in Shakespeare’s works. In Henry IV, Part 2, the magistrate Robert Shallow says: ‘A friend in the court is better than a penny in the purse.’

It cost a penny to watch the Bard’s plays at the Globe Theatre as a ‘groundling’ — standing on the ground rather than seated. These groundlings were mockingly called ‘penny-stinkers’.

Canada got rid of ‘pennies’ in 2012, when it cost more to produce the coin than they were worth. To stop people cashing on the change and causing inflation, retail prices were rounded down or up to the nearest five-cent figure. The Canadian Government saved £6 million a year by the change.

In New Zealand, they stopped making their cent and two-cent pieces in 1990. Many retailers rounded down prices to the nearest 5c as a gesture of goodwill.