Priest, 46, dies after bringing Ebola to the Congolese city of Goma

An Ebola patient has died after bringing the disease to the Democratic Republic of Congo’s (DRC) eastern city of Goma, the nation’s government has confirmed.

The unnamed patient, 46, became infected while visiting the town of Butembo, which has been an epicentre in the ongoing outbreak.

The DRC’s health ministry claims the man took a bus the 200km (124 mile) journey from Butembo to Goma last week. The patient, who was a priest, died while travelling back for treatment.

Goma, which borders Rwanda, is a major transport hub. It has a population of more than two million, making it the largest city yet to be affected by the outbreak.

Experts from the World Health Organization (WHO) have warned the priest’s case could be a ‘game changer’, with Goma being a ‘gateway to the world’.

Health officials have reportedly identified 60 people who encountered the priest after he became ill, of which just half have been vaccinated against Ebola.

The DRC’s outbreak is the second biggest in history, with more than 2,500 cases and over 1,600 deaths to date.

An Ebola patient has died after bringing the disease to the Democratic Republic of Congo’s (DRC) eastern city of Goma. The town lies 200km (124 mile) south of Butembo, which has been an epicentre in the DRC’s ongoing outbreak. These are just two of several affected cities 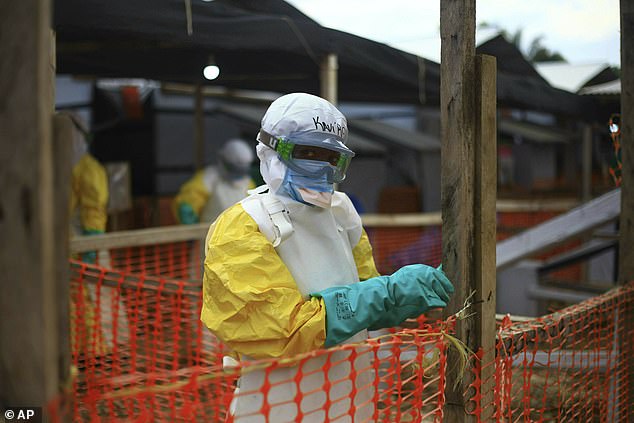 The unnamed patient, 46, became infected in Butembo. He later caught a bus to Goma, where he was diagnosed. A health worker is pictured at a treatment centre in the town of Beni

Tedros Adhanom Ghebreyesus, director-general of the WHO, said: ‘The identification of the case in Goma could potentially be a game-changer in this epidemic.

‘[Goma] is a gateway to the region and the world.’

‘Just when we start to get control of the virus in one area, it appears in another.’

However, Mr Ghebreyesus has also urged people not to panic.

‘We are confident in the measures we have put in place and hope that we will see no further transmission of Ebola in Goma,’ he said.

‘Nevertheless, we cannot be too careful.’ 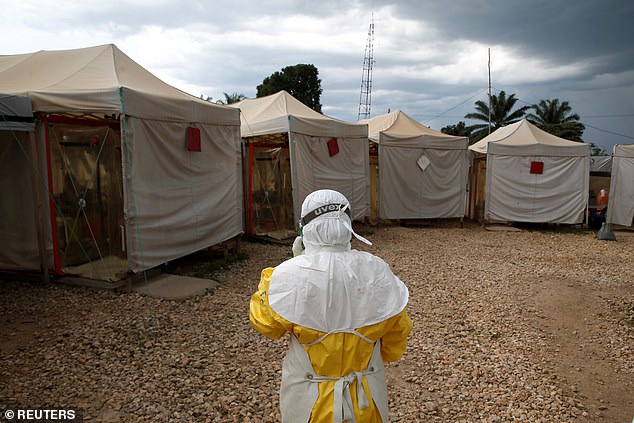 The priest showed no signs of ill health during the 18-hour bus journey to Goma and even made it through three medical checkpoints, The Guardian reported.

However, Standard Media reported: ‘At each checkpoint, he wrote down different family names and forenames on the passenger list, which probably indicates a will to hide his identity and state of health.’

When he arrived in Goma on Sunday, he sought medical help after becoming feverish, according to the DRC’s health ministry.

Once diagnosed, he was taken back to Butembo the following day. Butembo is better equipped to treat Ebola cases, authorities said.

‘He died during transfer by road,’ Aljazeera reported. 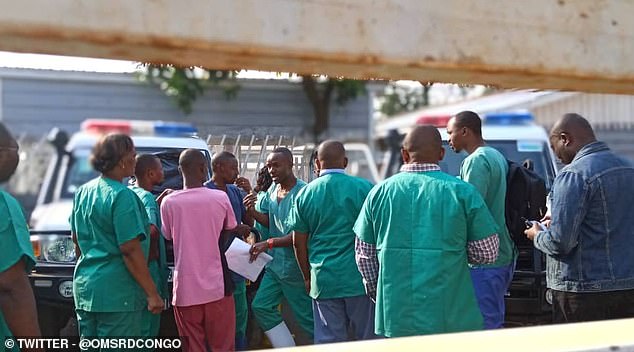 All 18 passengers on the deceased’s bus, as well as the driver, have been tracked down and vaccinated, the BBC reported.

Reuters reported that health officials have identified 60 people who came into contact with the deceased after he became ill.

Of these, just half have been vaccinated, the officials told the WHO.

The priest held regular services at seven churches in Butembo, where he would place his hands on worshippers, ‘including the sick’, the ministry said.

Ebola is highly contagious and spreads via the blood or other bodily fluids of patients, or contaminated surfaces.

‘Because of the speed with which the patient has been identified and isolated, as well as the identification of all passengers from Butembo, the risk of spreading to the rest of the city of Goma remains low,’ the ministry said in a statement. 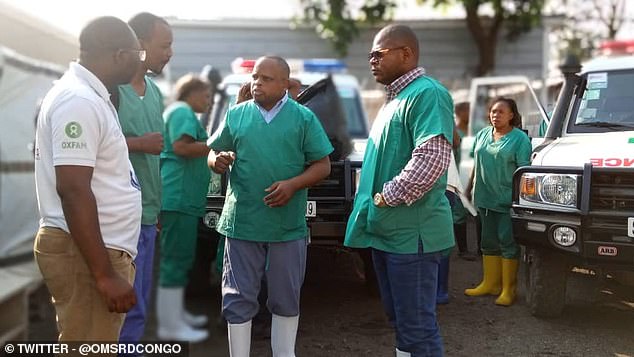 Around 3,000 health workers in Goma have been vaccinated.

Health officials have reportedly been dreading the arrival of Ebola to the city for months.

‘While not welcome news, it is something we have long anticipated,’ Mr Ghebreyesus wrote on Twitter.

‘We have been doing intensive work to prepare Goma so that any case is identified and responded to immediately.’

In a statement, Mr Kasivita said: ‘I call on the population of the city of Goma and its outskirts to keep calm.

‘[And] co-operate with response teams, by observing hygiene and prevention measures and notifying any suspected case of Ebola’.

A motorbike taxi driver who lives in Goma told France24: ‘I hope the authorities do everything to trace these people.

‘Goma is a huge crossroads, leading to several destinations.’

Rwanda is also said to be on high alert. Many people reportedly move between Goma and the Rwandan city of Gisenyi every day.

Diane Gashumba, health minister of Rwanda, urged residents to ‘think twice before crossing to where there is a disease’.

Doctors Without Borders (MSF), which has suspended operations in the Beni-Butembo area due to violence, said the Goma case ‘shows the situation is still worrying and the epidemic is still not under control.’

The WHO’s emergency committee are due to discuss whether the outbreak should be declared a ‘public health emergency of international concern’.