A school is giving 300 children every Friday afternoon off – because tired pupils ‘lack focus’ by the end of the week.

Primary school pupils at Neylands Community School in Milford Haven, Pembrokeshire, are set to get that Friday feeling early when they will be able to leave the school gates at 12.25pm.

And the school says this is not to save money – like other schools which shut early – but to help the children’s education.

Neyland Community School in Milford Haven, Pembrokeshire, will finish early on a Friday at 12.25pm from September because pupils tired pupils ‘lack focus’ by the end of the week

A letter was sent out to parents which claims the early finish could improve ‘greater family time’.

It hopes the early finish will ‘further raise standards and improve outcomes for learners across the school’.

Phil Ormond, responding to the news, wrote on Facebook: ‘What an amazing opportunity to give the children valuable hands on experiences like a Science extravaganza, an afternoon working in the environment planting trees, pond dipping, or a technology afternoon making bird boxes, hedgehog boxes etc.

‘There must be many highly skilled ‘oldies’ in the area who would love to share their skills and knowledge.

‘A problem… or an opportunity?’

One mum said: ‘It is a really good idea – I know that by Friday afternoon the kids are burnt out and don’t take anything in.’

But another dad fumed: ‘This is ridiculous. Both my wife and I work so this will mean one of us having to take Fridays off too to look after our kids.’ 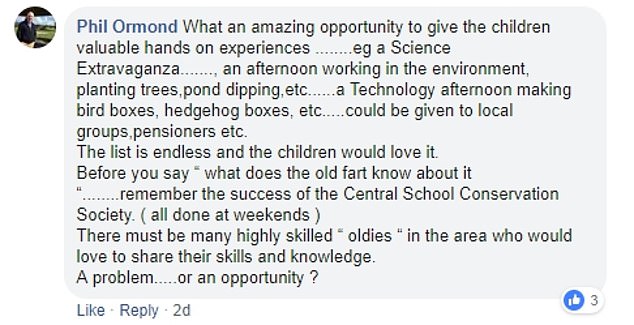 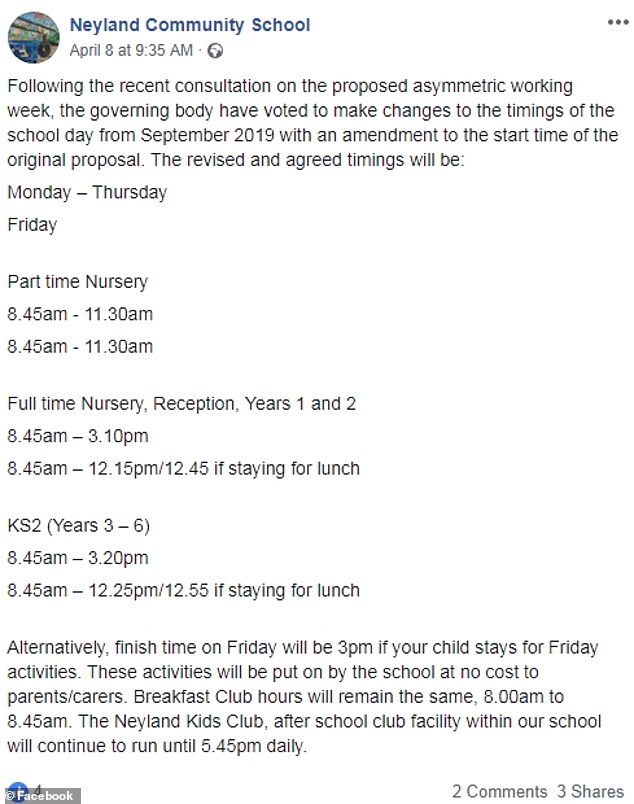 On Monday the school announced the updated timetable which will begin in September following a vote from its governing body.

After-school activities will also be available ‘at no extra cost to parents and carers’, on Friday’s meaning kids could still be picked up from 3pm as normal.

A spokeswoman for Pembrokeshire County Council said: ‘The intention is not to give teachers an afternoon off as has been mistakenly suggested by some. Teachers will have no change in their current contracted working hours – just in the way they work them.

‘The main reason for the schools wanting to implement these changes is to further raise standards and improve outcomes for learners across the school.

‘This will be achieved by increased professional learning to up skill the whole workforce – in line with the new National Mission for Wales and New Curriculum.

‘We want to establish a culture of inquiry, innovation and exploration where teaching approaches and interventions used in class are research and evidence based on an on-going basis. This is a change to existing arrangements.

‘If we cannot utilise Friday afternoons in this way then teachers will be end up being regularly taken out of class for training. Naturally this results in disruption for the children and supply teacher costs, both of which we really want to avoid.’

Two other schools in the area, Pembroke Dock Community School and Ysgol Harri Tudur school, have already said they will extend working hours Monday to Thursday and finish at 12.45pm on Friday.

‘In six months, we’ve been able to treble the amount of training to staff.

‘On alternative weeks staff can go home to spend time with their families on Friday afternoons.

‘It certainly has raised morale and all of the staff reported they wouldn’t want to go back to the way they were working. Sickness levels have also improved.’

The Welsh Government said opening hours were a matter for schools and governing bodies.

A spokesman said: ‘Schools must fully consult before making any changes, ensuring that the number of teaching hours are not being compromised and that the curriculum is being delivered in its entirety.’