A primary school teacher who documented her cancer battle on social media, becoming known as an ‘inspiration,’ has died.

Gill Slatter, from Whitstable, Kent, started recording her fight with bowel cancer – which she was diagnosed with in 2020 after previously beating breast cancer –  sharing regular updates on her Twitter page.

The 41-year-old developed a huge following, with her posts seen by more than 20,000 people at a time, captioning them #bebrave as she documented her treatment and saying that she felt ‘sad but calm’ when she ran out of treatment options in August.

This morning Gill’s family announced she sadly died in the early hours.

Writing online, her mother Lynne Slatter said: ‘We are heartbroken to tell you Gill passed away at about 5am today.

‘Your support and encouragement during the years of her suffering meant so much to her and us, her family.’

Gill had been diagnosed with breast cancer in 2013.

She then underwent chemotherapy, before going into remission. 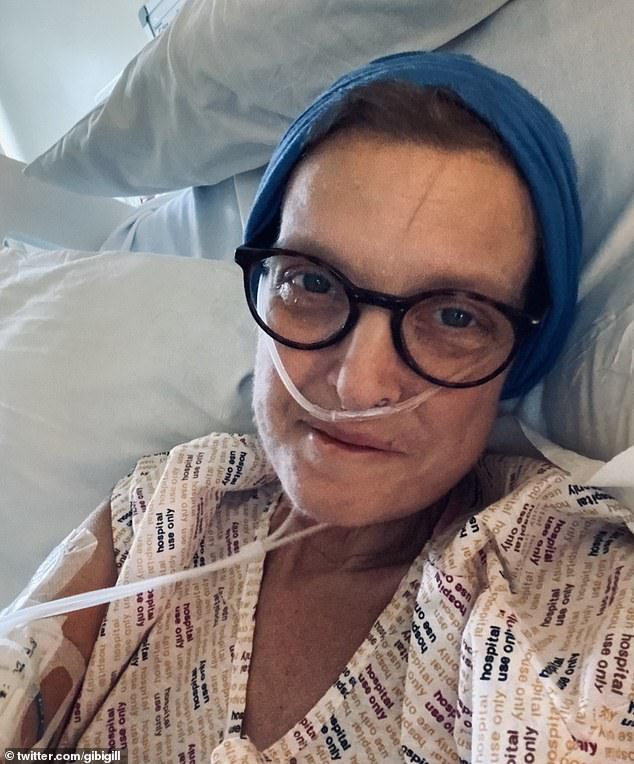 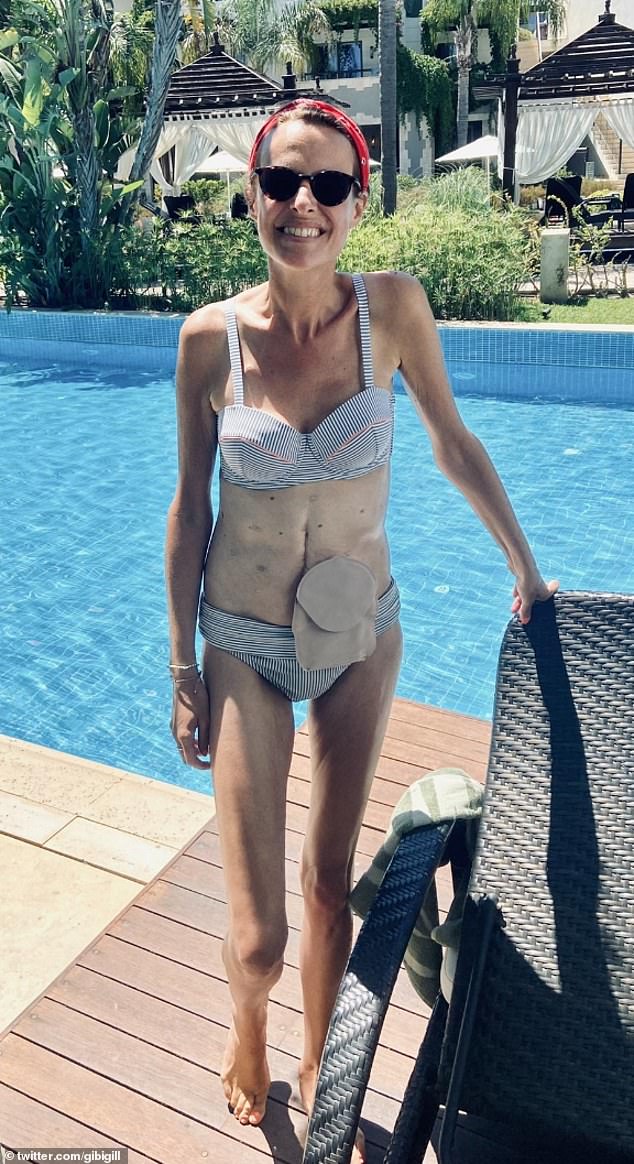 Thin but smiling: Gill (pictured here on holiday after having a colostomy bag fitted) was known to enjoy the moments when she wasn’t in hospital 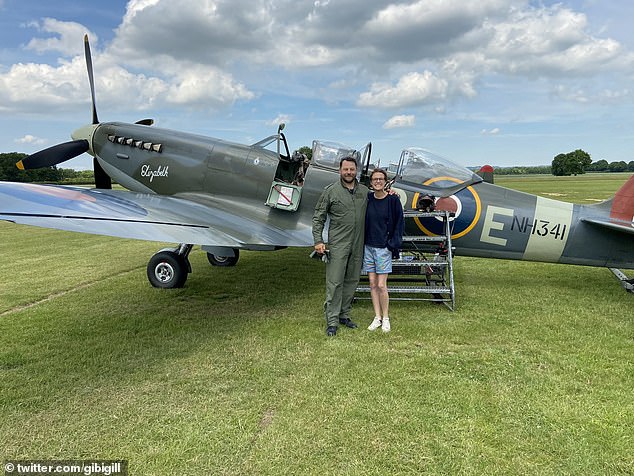 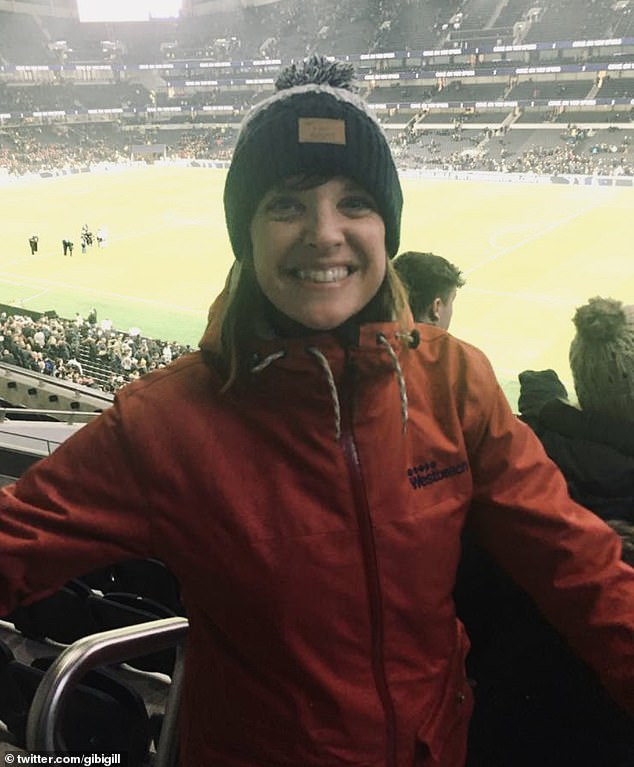 But just seven years later she was told by doctors that she had stage four bowel cancer.

Gill then began posting about her life and cancer journey, sharing precious moments such as holidays and going to the football.

She also encouraged people to donate blood and get the covid vaccine.

Like Dame Deborah James, who died of bowel cancer last year, she also urged people to check their poo. 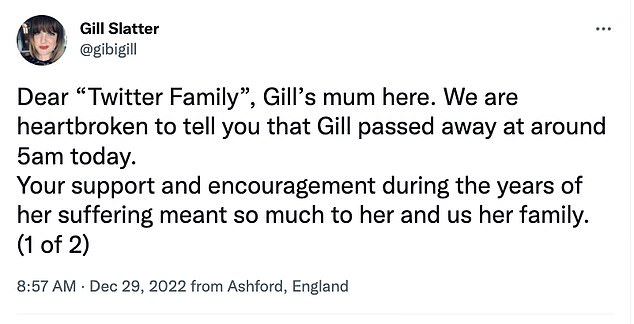 And she even gained the support of her favourite football club Tottenham Hotspur, who helped raise awareness of the symptoms of breast and bowel cancers.

She also shared her health news with her followers, often showing them photos of her wigs she wore after losing her hair to chemotherapy.

In August, she wrote: ‘Still in hospital however a scan this week showed more cancer spread in my bowel.

‘A decision will be made this weekend if I should be moved to a hospice as unfortunately surgery is not an option.

‘Feeling sad but calm with the situation.’ 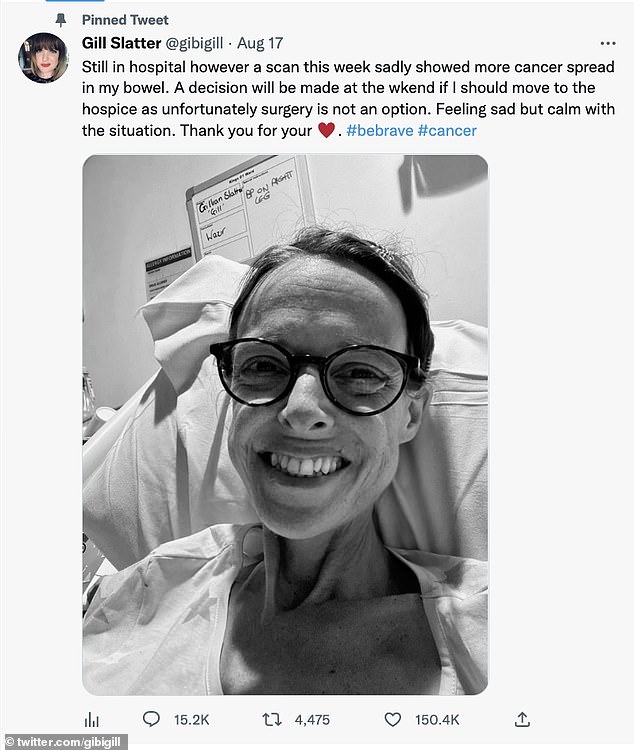 In August, Gill posted that the cancer had spread and that unfortunately surgery was not an option

Following news of her death, many Twitter users posted their condolences and how Gill was inspiring and brave

The symptoms of bowel cancer can be subtle and do not necessarily make you feel ill. But more than 90 per cent of people with bowel cancer have

– blood in the poo without haemorrhoids

– abdominal pain, discomfort or bloating always brought on by eating – sometimes resulting in a reduction in the amount of food eaten and weight loss

See a GP if you have any of the symptoms of bowel cancer for three weeks or more.

In her last social media post on December 22, Gill revealed she was still in hospital.

She wrote: ‘Unfortunately, the chemo has stopped working so I’m just relying on the wonderful NHS to keep me going.

‘I feel like I’m being surrounded by a big NHS family, along with my own who see me every day.’

Following the announcement of her death, tributes poured in from her ‘Twitter family’.

One wrote how Gill was clearly ‘so generous and brave’.

Another wrote: ‘Gill’s love, humour, and kindness will shine forever as a beacon of hope and encouragement for others.’

Many noted that she ‘touched so many lives’.

One wrote: ‘Although I never met her, I knew her to be incredibly stoic, inspirational and kind despite being dealt the toughest of circumstances.

‘The world is a darker place without her presence, but heaven has gained a tremendous angel.’

Mother, 41, who went to the doctor with a stomach ache shares her shock at terminal bowel cancer diagnosis – as she calls for under-60s to take a ‘fit test’ to check for symptoms