Pictured: Prince Andrew enjoys a party at Tramp nightclub just 72 hours after after he ‘danced with Virginia Roberts there when he was grabbing her hips’

By Charlotte Wace and Ian Gallagher For The Mail On Sunday

Deep in conversation with a female friend, Prince Andrew enjoys a party at Tramp nightclub just 72 hours after Virginia Roberts’s claims that she danced with him at the same venue when ‘he was grabbing my hips and… pouring with perspiration’.

On this occasion, March 13, 2001, the Duke was accompanied by his ex-wife Sarah Ferguson. They joined 150 guests celebrating the 40th birthday of racehorse breeder Guy Sangster, the son of racing tycoon Robert Sangster. Andrew was photographed talking to Guy Sangster’s wife Fiona.

Other luminaries at the event included fashion designer Bruce Oldfield and George Mountbatten, the Marquess of Milford Haven.

Prince Andrew, pictured in Tatler magazine, is seen enjoying a party at the Tramp nightclub just 72 hours after Virginia Roberts claimed that she danced with him at the same venue. He was talking to Fiona Sangster at a party to celebrate the 40th birthday of racing tycoon Robert

According to Tatler magazine, which sent a photographer, ‘In true Tramp fashion, the partying continued till 4am’. Whether Andrew stayed to the end is unknown but asked during his BBC interview last week about his ‘party Prince’ reputation, he replied: ‘Well, I think that’s also a bit of a stretch. I don‘t know why I’ve collected that title because I don’t… I never have really partied.’

Although the celebrations were held on March 13, Mr Sangster’s birthday actually fell on Saturday, March 10. Coincidentally, that is the date that Ms Roberts places Andrew at the club. Then aged 17, she alleges that after dancing with him at Tramp, they later had sex at Ghislaine Maxwell’s mews house in Belgravia – the first of three alleged sexual encounters with Andrew. The Prince denies all the allegations.

According to Tatler, dancing was in evidence at the Sangster party ‘although many of the guests’ routines seemed stuck in a time warp’.

When asked during the Newsnight interview whether he remembered dancing at Tramp on March 10, Andrew replied: ‘No, that couldn’t have happened because the date that’s being suggested I was at home with the children.’

Asked how he was so certain of this, the Duke replied: ‘On that particular day that we now understand is the date which is the tenth of March, I was at home, I was with the children and I’d taken Beatrice to a Pizza Express in Woking for a party at, I suppose, sort of four or five in the afternoon.’ 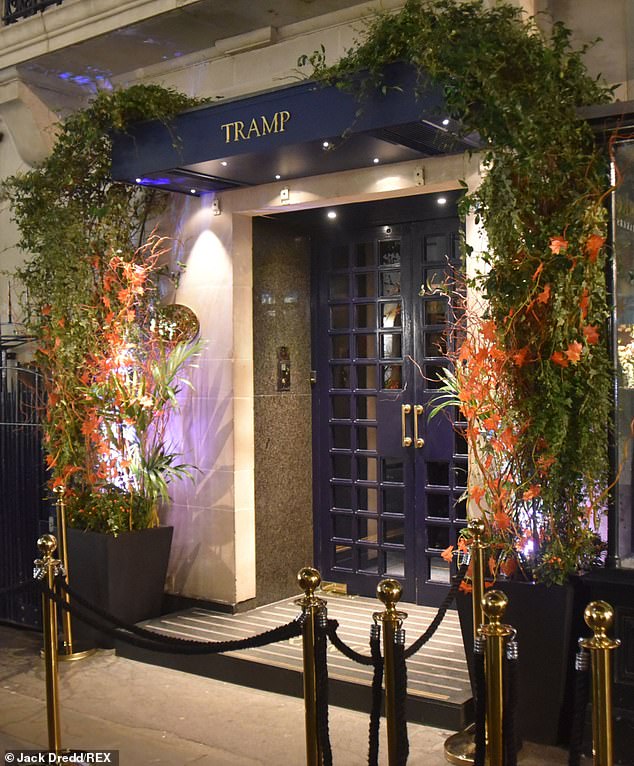 The doors of the Tramp nightclub pictured in London last week. Prince Andrew was in the club on the actual date of Robert Sangster’s birthday