Prince Andrew was seen braving the harsh winter weather this morning as he enjoyed a horse ride around Windsor Castle.

The Duke of York, 60, who lives at the Royal Lodge just three miles away from the residence, donned a black windbreaker jacket and a riding helmet for the outing.

Accompanied by a female groom, the royal seemed to be having an in-depth conversation and was pictured expressing himself with an arm in the air.

His early morning ride comes days after he was notably absent from the Queen’s end-of-year reunion at Windsor Castle with senior royals.

Her Majesty was joined by Princess Anne, Prince Charles and the Duchess of Cornwall, the Earl and Countess of Wessex, to welcome the Duke and Duchess of Cambridge back from their 1,250-mile ‘morale boosting’ tour of the UK.

The Duke of York has been notably absent from royal engagements since stepping back from duties late last year after his disastrous Newsnight interview about  his friendship with paedophile financier Jeffrey Epstein. 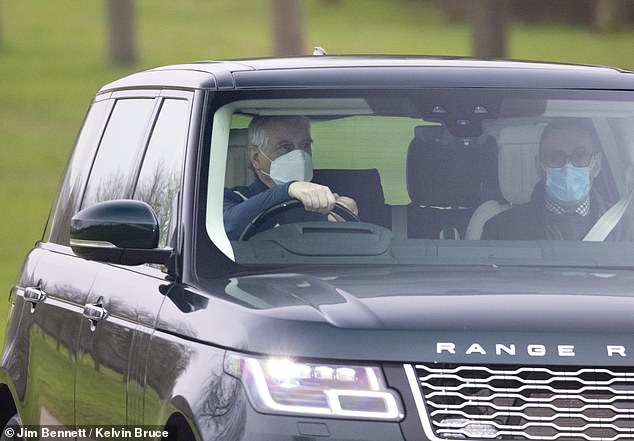 The Duke of York donned a black windbreaker jacket for his early morning outing and wore a white face mask, while driving a large black car with a male companion

It comes as the royal family prepares to spend the festive season apart, with the Queen and the Duke of Edinburgh having a ‘quiet’ Christmas at Windsor Castle, rather than inviting the family to Sandringham. The royal family have opted for an unconventional Christmas arrangement, despite lockdown rules being eased during the festive period.

The Queen 94, and Prince Philip, 99, traditionally spend the festive season with close family at Sandringham, in Norfolk.

However, this year the couple are expected to spend Christmas Day without any of their four children for the first time since 1949.

Prince Andrew who is widely regarded as the Queen’s favourite child, seemed content as he rode around the grounds this morning.

He was seen wearing a white face mask as he sat behind the wheels of his black Range Rover following horse riding. 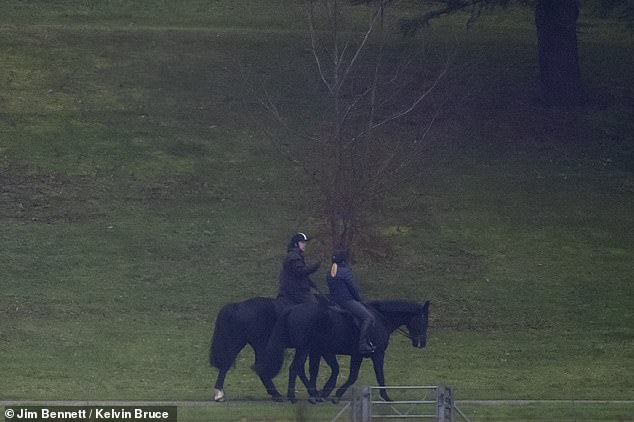 Accompanied by a female groom, the Duke of York appeared to be having an in-depth conversation and waved his arm in the air 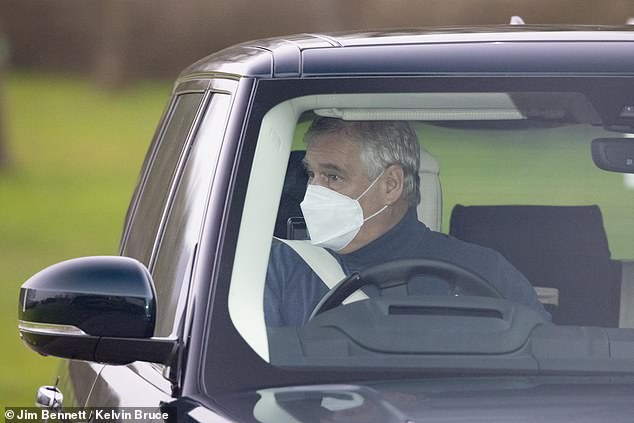 The Duke of York (pictured) is not expected to celebrate Christmas Day with his parents, as the Queen and Duke of Edinburgh have their first Christmas without any of their four children for the first time since 1949

It is likely the Duke of York will celebrate Christmas with Sarah Ferguson and their daughters Princess Eugenie and Princess Beatrice, as well as their husbands Jack Brooksbank and Edo Mapelli Mozzi.

He has been rarely seen since Buckingham Palace announced in November 2019, that he would be stepping back from royal duties for the ‘foreseeable future’ following his disastrous attempt to clear his name in a BBC interview.

In the Newsnight interview with the BBC’s Emily Maitlis, the duke denied claims that he slept with Virginia Giuffre, who says she was trafficked by the late paedophile billionaire Jeffrey Epstein, on three separate occasions, including when she was 17, still a minor under US law. 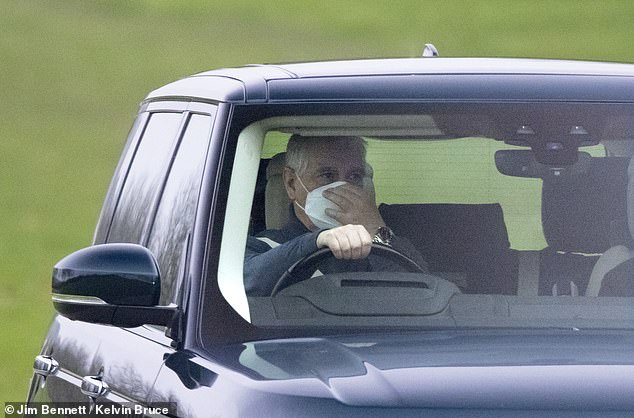 Prince Andrew is likely to spend Christmas with his daughters Princess Eugenie and Princess Beatrice, their husbands and Sarah Ferguson

Former socialite Ghislaine Maxwell is on remand for child sex trafficking charges linked to Jeffrey Epstein and may be in jail a year before her trial next summer. Pictured, the pair together in 2005

The duke was criticised for showing a lack of empathy towards the paedophile’s victims and a lack of remorse over his friendship with Epstein.

In a statement released on his parents’ wedding anniversary last year, Andrew said that the Queen had given her permission for him to bow out of royal duties for the ‘foreseeable future’.

He said: ‘The circumstances relating to my former association with Jeffrey Epstein has become a major disruption to my family’s work.’

The Duke of York’s name was redacted from Ghislaine Maxwell’s court desposition documents.

Alleged victim Virginia Roberts Giuffre has accused Prince Andrew of having sex with her when she was 17 years old.

Speaking in her adopted hometown of Cairns in Far North Queensland, American Ms Giuffre said while she was happy the documents were unsealed,  she questioned why several names including that of the Prince were redacted.

‘I don’t understand why we are protecting someone who hides behind mummy’s skirt and says “I didn’t do it”. His name should have been out there in the deposition.’

Prince Andrew added he continued to ‘unequivocally regret my ill-judged association’ with Epstein and pledged to help ‘any appropriate law enforcement agency’.

One year on from withdrawing from his public role, the duke is widely expected never to return to royal duties.

He has faced a war of words between his camp and American authorities over his availability to answer questions about Epstein.

Prince Andrew was accused of attempting to ‘falsely portray himself to the public as eager and willing to co-operate’ by US attorney Geoffrey Berman, who was leading the investigation into Epstein.

But the duke’s legal team said he had made three offers to give a witness statement.

Calls for him to speak to the authorities were renewed after Maxwell appeared in court in the US accused of facilitating Epstein’s sexual exploitation of underage girls. Her trial is set for July next year.

As the Royal Family adjusted to carrying out engagements via video call during the coronavirus outbreak, Prince Andrew, who categorically denies any wrongdoing, stayed out of the public limelight.

The duke’s milestone 60th birthday in February was a quiet affair, with his planned military promotion to Admiral deferred at his request.

He made a rare appearance in April when he was pictured on Instagram with his ex-wife Sarah, Duchess of York, packing cupcakes into care packages for a hospice.