The infamous photograph of Prince Andrew smiling as he stands with his left arm around the waist of a young Virginia Roberts has dogged him for years.

Both the photo and the claims made by the young American – that she had sex with the prince in society hostess Ghislaine Maxwell’s central London home – refuse to go away.

Miss Roberts maintains the photograph was taken in March 2001 when paedophile Jeffrey Epstein, Miss Maxwell and Andrew returned to Miss Maxwell’s mews house after dinner and a visit to Tramp nightclub in Mayfair.

Miss Roberts, who was 17, said the group went upstairs and it was then that she asked Epstein to take a shot of her with the divorced prince. Miss Maxwell is in the background.

She later revealed she wanted to show the photograph to her mother and, after the picture was taken, Epstein and Miss Maxwell left the pair alone.

Today the prince will tell Newsnight’s Emily Maitlis he does not recall meeting Miss Roberts.

The clear implication from his answer on the BBC is, therefore, that the photograph is a fake.

The picture was first published by the Mail on Sunday in 2011 after the newspaper found Miss Roberts living in a small bungalow in New South Wales.

In recent months, Andrew’s friends have tried to discredit the photograph – with some saying it had been doctored on a computer. 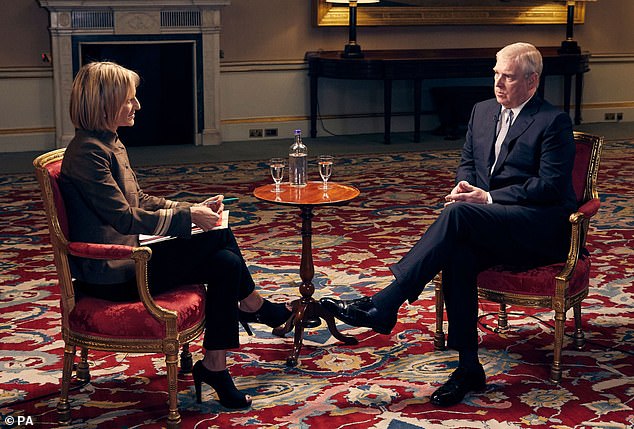 The Duke of York , speaking for the first time about his links to Jeffrey Epstein in an interview with BBC Newsnight’s Emily Maitlis

Andrew is seen dressed in dark trousers and a light blue shirt with several buttons undone and with the sleeves adorned with cufflinks. This was a ‘look’ he favoured at the time. Only a few months earlier a photograph was taken of the prince in almost exactly the same clothing.

Sources close to Andrew have also claimed his fingers ‘don’t look right’ in the photograph.

However Andrew has chubby fingers and in a shot taken of him at around the same time this appears to be the case. His fingers in the shot with Miss Roberts also look remarkably similar to other photos from the time.

Sources close to Andrew question his height relative to Miss Roberts. The prince is around 6ft, while Miss Roberts is said to be around 5ft 8in. The picture does seem to reflect this.

There is clearly the sight of a flash as the shutter button was pressed by Epstein and the style of the window matches Miss Maxwell’s then home.

Photographic experts point out that the practice of manipulating images was in its infancy when the picture was taken.