Prince Charles spoke of Palestinian ‘freedom, justice and equality’ yesterday – as the US prepared a peace plan expected to favour Israel.

The Prince of Wales, 71, made the comments as he addressed a reception in Bethlehem celebrating the ties between Britain and the region.

Donald Trump’s Middle East initiative is intended to finally resolve the Israeli-Palestinian conflict. However, it is believed to grant Israel more territory, as well as other concessions.

The royal trip is significant as the Queen has never made an official visit to Israel or Palestinian territories.

Prince Charles, 71, said he wished the Palestinian people ‘freedom, justice and equality’ today while making a historic first visit to the Occupied Palestinian Territories (pictured, speaking at a reception in Bethlehem) 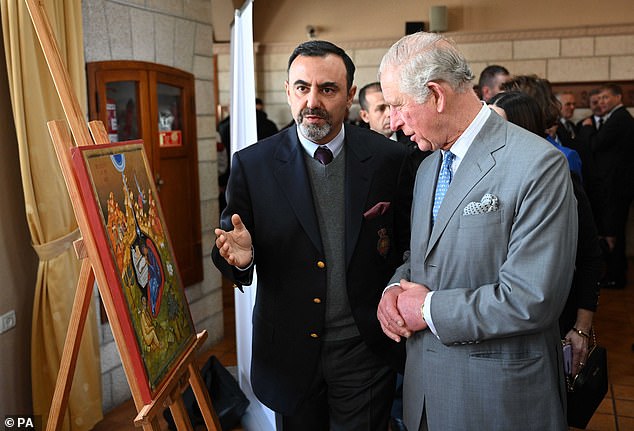 Speaking to a reception of clerics from different denominations at the Franciscan pilgrim house in Bethlehem, Charles said: ‘I have endeavoured to build bridges between different religions so that we might learn from each other and be stronger together as a result.

‘It breaks my heart, therefore, that we should continue to see so much suffering and division. No one arriving in Bethlehem today could miss the signs of continued hardship and the situation you face.

‘And I can only join you, and all communities, in your prayers for a just and lasting peace.

‘We must pursue this cause with faith and determination, striving to heal the wounds which have caused such pain. It is my dearest wish that the future will bring freedom, justice and equality to all Palestinians, enabling you to thrive and prosper.’

He began his historic visit to the West Bank with a symbolic gesture of unity by walking through Bethlehem with Muslim and Christian leaders from the Mosque of Omar to the Church of the Nativity, said to be built on the site of Jesus’s birth. 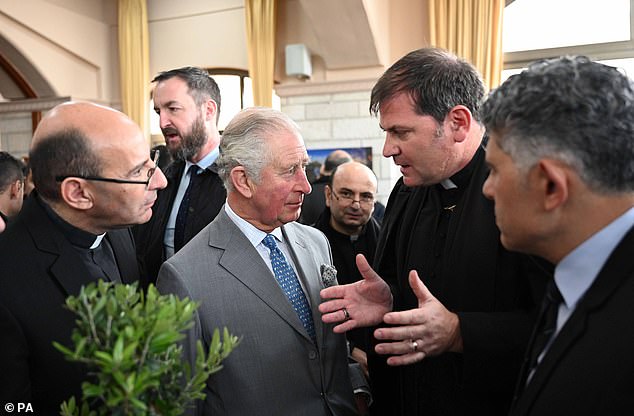 The governor of Bethlehem, Kamel Hmeid, told Charles how Christians and Muslims lived as neighbours successfully for centuries after Jerusalem was conquered by Caliph Omar in 637AD. Charles said the message of religious co-existence was a ‘wonderful example’.

Amnesty International UK praised the prince’s comments, saying he had offered ‘genuine sympathy and solidarity with Palestinians’ over what it said were their years of suffering.

She told the prince of her hope that ‘history will change’ and Palestinians will be ‘given our right as Palestinian people with an independent state and Jerusalem as our capital’.

Charles also stopped to chat with a group of Palestinian refugees, among them Dr Abdelfattah Abu Srour, director of the Al Rowwad Centre in Aida refugee camp. 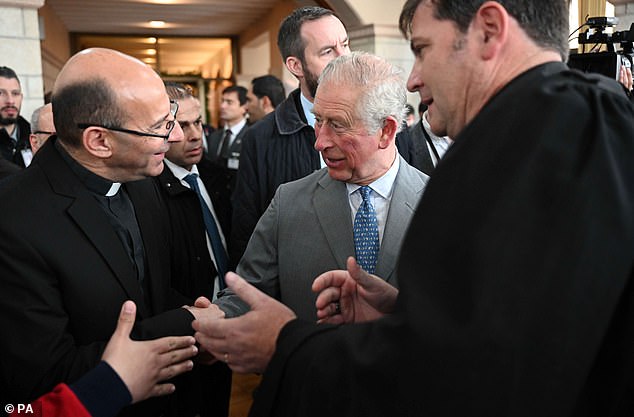 Prince Chalres made his speech while at a Franciscan pilgrim house close to the Church of the Nativity, where he spoke with church leaders and health and education officials (pictured) 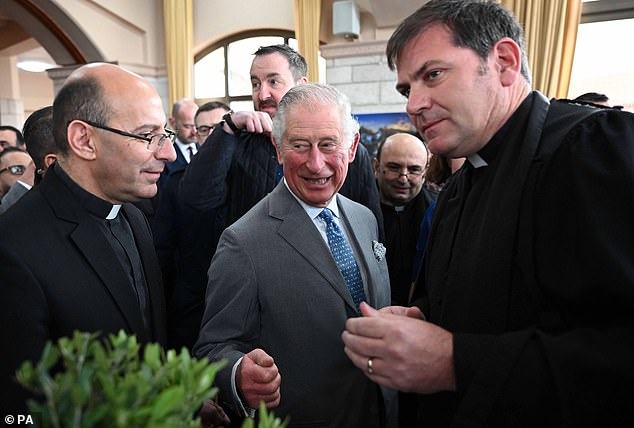 The royal appeared in high spirits at the event earlier today, which took place on his second day in the region

He told the royal visitor that he works with children as young as eight who, when asked what they want to be when they grow up, have responded ‘that they want to die because nobody cares’.

He said the prince replied: ‘It is painful to hear that.’

Charles also spoke with another refugee, Rua Ahmad Abuoda, a 20-year-old engineering student and member of a women’s empowerment group which works with mothers and disabled children in the Aida and Al-Azzeh refugee camps.

She said: ‘I spoke to him about disabled children. Some of them have been injured through Israeli soldiers and conflict.’

Kerry Moscogiuri, Amnesty International UK’s campaigns director, said: ‘Prince Charles’s words will resonate with many Palestinians because they appear to signal a recognition that half a century of Israeli military occupation has produced huge injustice. 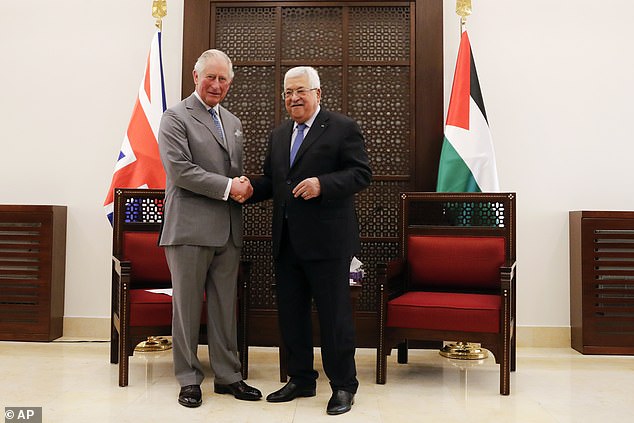 Prince Charles met Palestinian President Mahmoud Abbas at the official residence in Bethlehem, shaking his hand before sitting down for an official photocall and chat 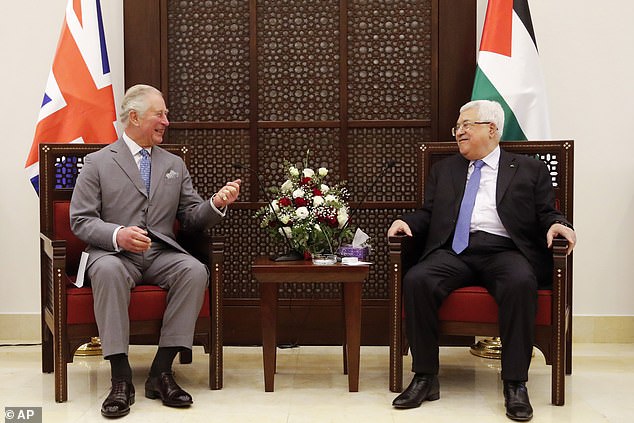 The meeting took place on the second day of his two-day visit to Palestine and Israel, after he toured Bethlehem and Jerusalem earlier in the day

‘In a discreet yet meaningful fashion, Prince Charles appears to have offered genuine sympathy and solidarity with Palestinians over their years of suffering.

‘One concrete step towards freedom, justice and equality for Palestinians must include the UK Government finally banning the sale in the UK of goods from the illegal Israeli settlements.’

The prince had been invited to the territories by Palestinian President Mahmoud Abbas and when they sat down for talks at his official residence in Bethlehem he praised Charles for his support.

Speaking though an interpreter Mr Abbas thanked the prince for supporting the ‘case of Palestine’ and said: ‘We hope in the near future Britain is going to recognise the state of Palestine. 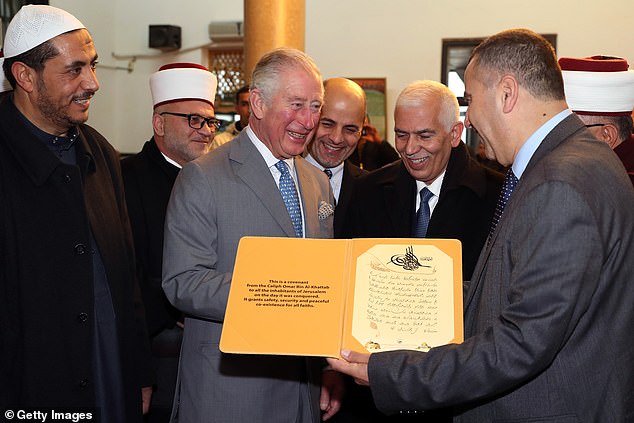 The Prince of Wales began an historic first visit to the Occupied Palestinian Territories by touring Bethlehem, the birthplace of Christ today, visiting the Mosque of Omar 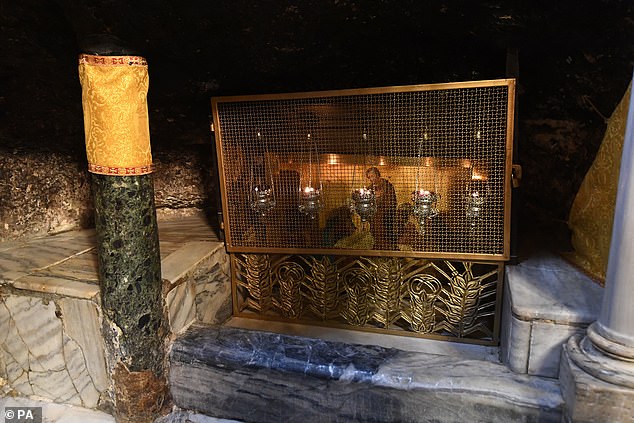 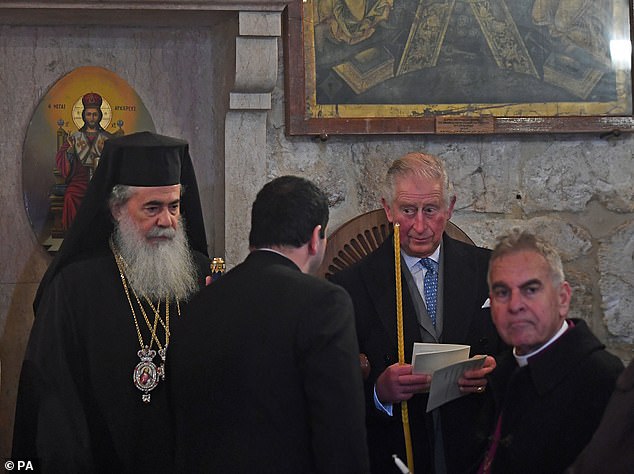 The Prince of Wales is currently on a two-day trip to the Middle East, meeting with the President of Israel Reuven Rivlin, Holocaust survivors and Palestinian President Mahmoud Abbas.

Charles began his historic first visit to the West Bank with a gesture of unity – walking through Bethlehem with Muslim and Christian leaders.

Earlier in the day, Prince Charles, whose visit to Bethlehem was not announced in advance, walked into the Mosque of Omar surrounded by a crowd.

The mosque is opposite the Church of the Nativity which contains a grotto said to be the site where Jesus was born. 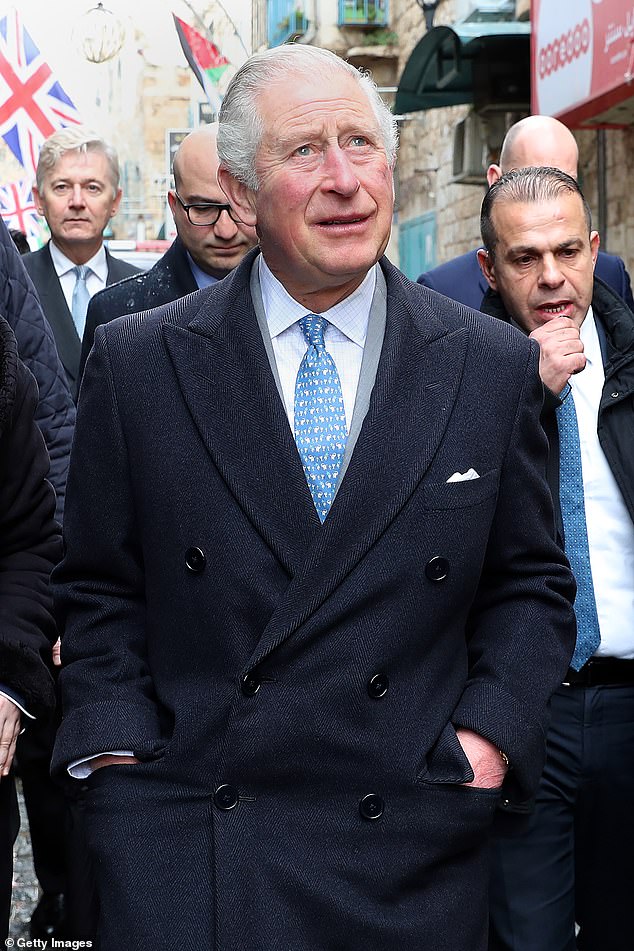 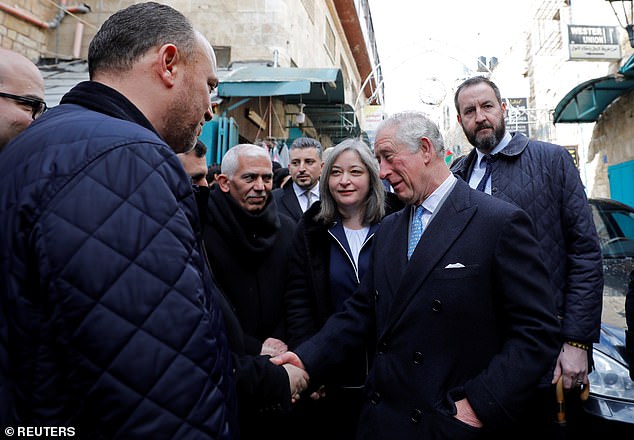 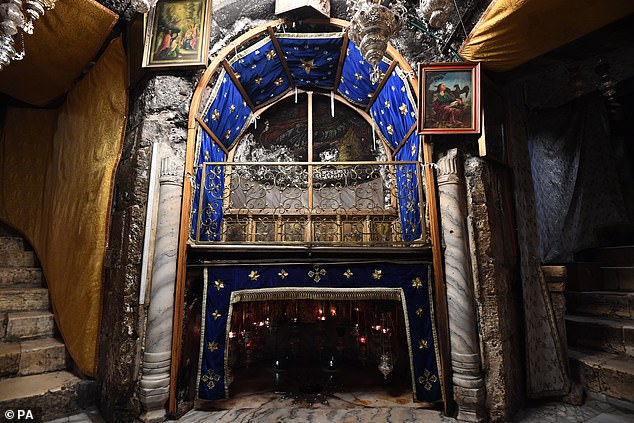 His appearance came after he gave a speech during a Holocaust memorial ceremony attended by some 40 world leaders in Jerusalem on the first day of his visit.

Charles paid homage to his grandmother, Princess Alice, for sheltering Jews in Nazi-occupied Greece during World War II, on Thursday.

Princess Alice of Battenberg and Greece was the mother-in-law of Britain’s Queen Elizabeth. A devout Christian, she died in London in 1969 and had asked to be buried in Jerusalem, next to her aunt, who like Alice had become a nun and founded a convent. 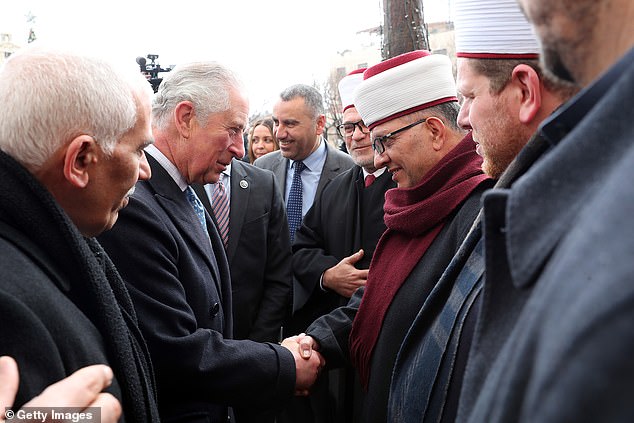 Pictured: Prince Charles, Prince of Wales arrives at the Mosque of Omar in Jerusalem, 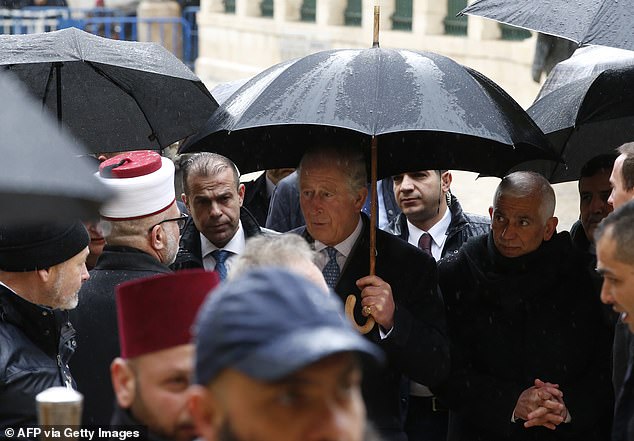 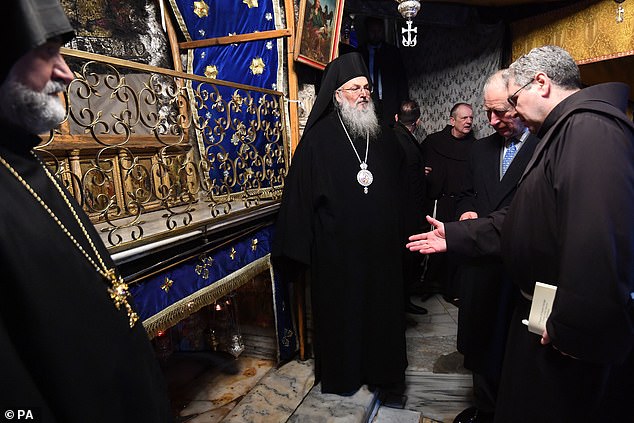 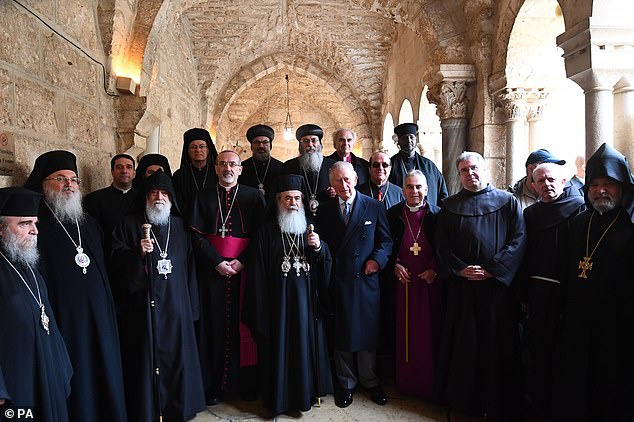 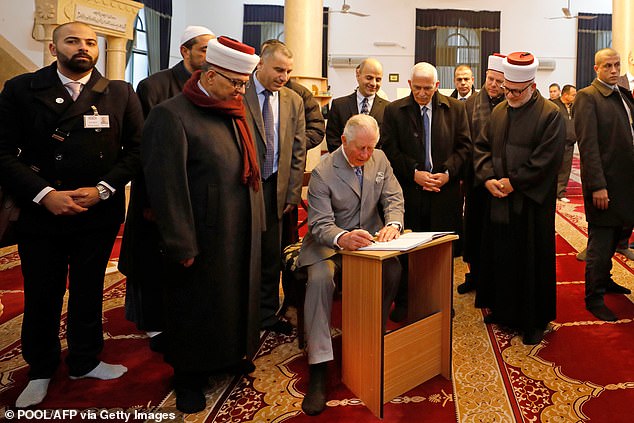 During his speech Prince Charles also urged nations to learn the ‘lessons’ of the Holocaust as he joined world leaders, amid the continued conflict of the Israel occupied Palestinian territories.

Charles’ tour – the highest level visit by a member of the monarchy to Israel and the Palestinian areas – marks the 75th anniversary of the liberation of the former Nazi concentration camp Auschwitz-Birkenau.

The heir to the throne’s visit follows one made by his son the Duke of Cambridge who toured Israel and the Occupied Palestinian Territories in 2018.

Charles has travelled to Jerusalem to attend the funerals of President Shimon Peres in 2016 and Prime Minister Yitzhak Rabin in 1995. 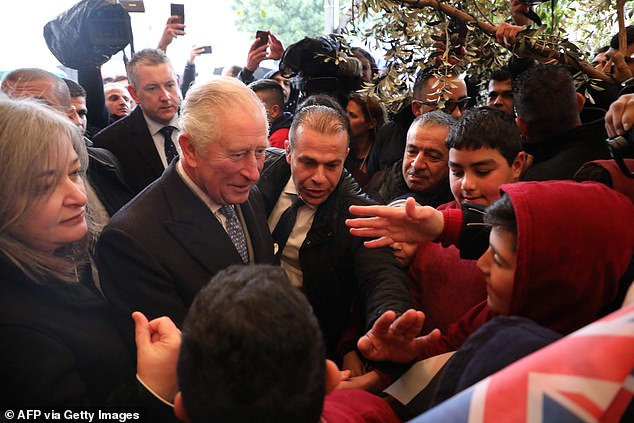 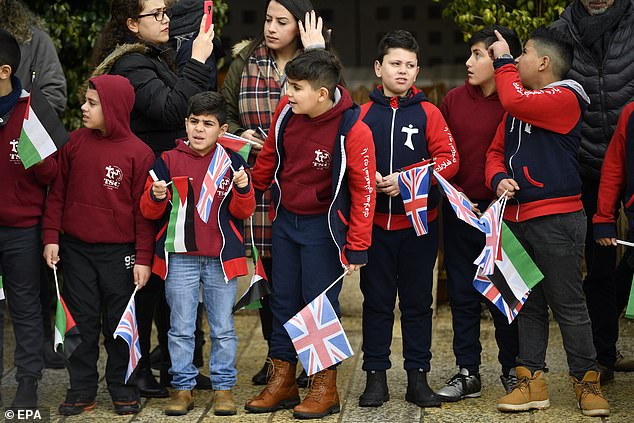 Children wait for the arrival of Britain’s Charles, Prince of Wales in Manger Square in Bethlehem 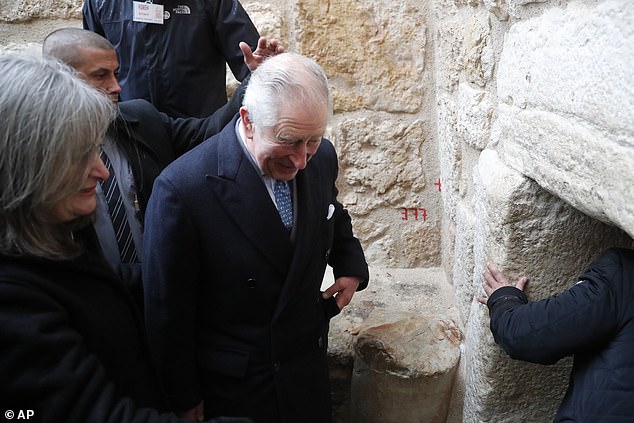 Pictured: Prince Charles visits the Mosque of Omar in Bethlehem 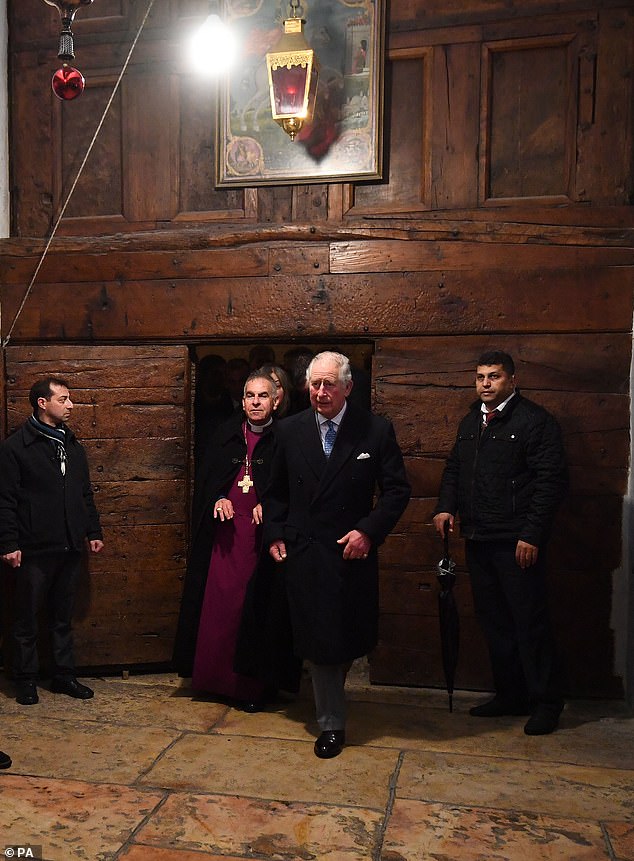 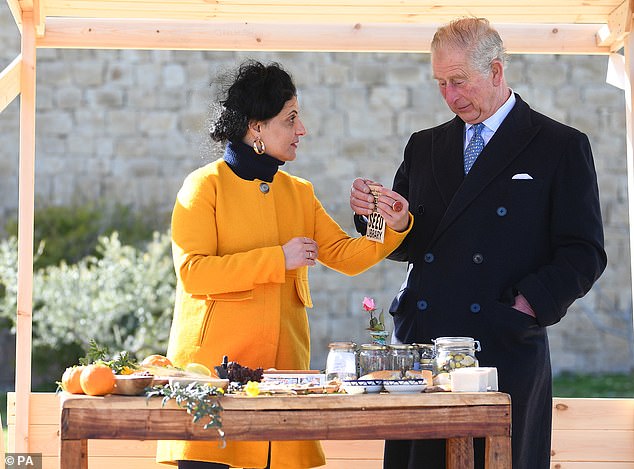 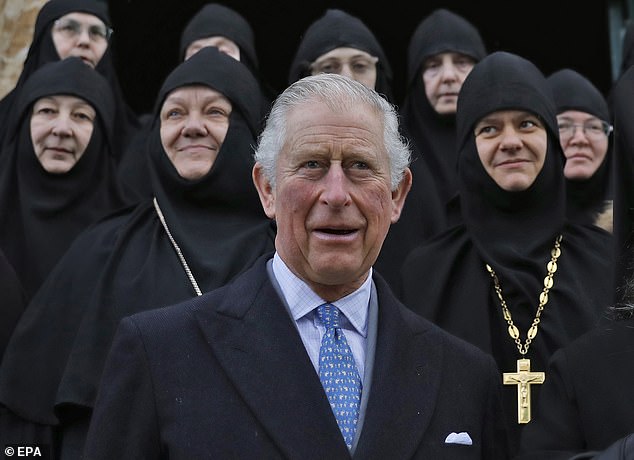 rince of Wales, poses for a picture with nuns and clergymen at the Russian Orthodox Church of Mary Magdalene on the Mount of Olives, Bethlehem

WHAT DO PEOPLE BELIEVE ABOUT THE TRADITIONAL BIRTHPLACE OF JESUS?

The Church of the Nativity, located six miles (10 km) outside of Jerusalem, is one of the most important religious sites in the world.

It has been recognised as the birthplace of Jesus since at least the Second Century and has been listed as a Unesco world heritage site since 2012.

The original church was built in 339 AD, but was rebuilt after fire in the 6th century and it is one of the oldest churches in the world still in daily use.

An estimated two million people make pilgrimages to the site each year to visit the church and the shrine below, the Grotto, where Jesus of Nazareth is believed to have been born.

But the region is of key importance to other religions as well. Almost 1,000 years before Jesus, Bethlehem was the city of King David.

Today, the site in Bethlehem is part of a large religious complex.

Set in the marble floor of the Grotto is a silver star which represents the spot where Jesus was born, installed in 1717 and surrounded by lamps to represent the different Christian communities.