The Queen’s cheeky great-grandson Prince Louis stole the hearts of the nation as he pulled faces and mucked about with his royal family at Her Majesty’s Platinum Jubilee celebrations this summer.

So mourners looking to have their spirits lifted even a little after the late Monarch’s death on September 8 were disappointed to learn that the Prince and Princess of Wales’s youngest – aged four – would not be attending yesterday’s historic state funeral for his ‘Gan Gan’.

Now Twitter users are joking about what antics the little prince might have gotten up to while ‘home alone’ for the day – with many kidding that the ‘real reason’ young Louis did not go was because of a ‘high chance of chaos’.

One meme shows the young royal’s face superimposed on the film poster of the classic 1990 movie Home Alone in place of Macaulay Culkin, while many others have shared memes of Culkin’s character Kevin running around the house after his parents accidentally forget to bring him on holiday under the caption: ‘And we now go live to Prince Louis at Buckingham Palace’.

Some imagined Louis leaving a trail of destruction at the Palace, comparing him to an appearance Mr Blobby made on ITV’s This Morning where he deliberately knocked items off the shelf.

And a spare thought was even made for the prince’s babysitter having to look after the mischief-maker. 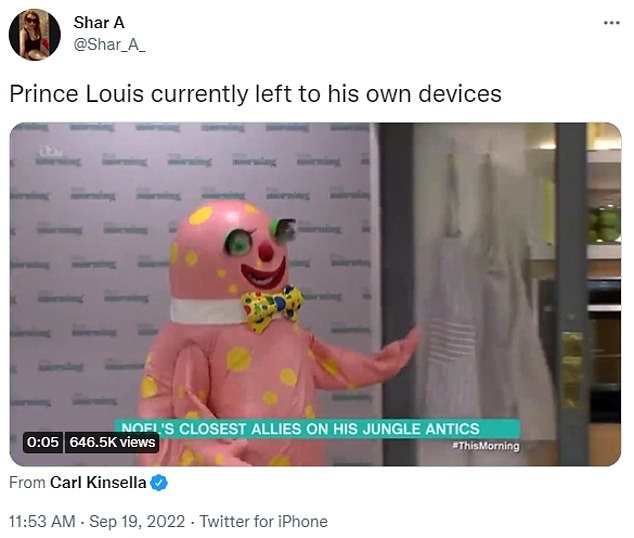 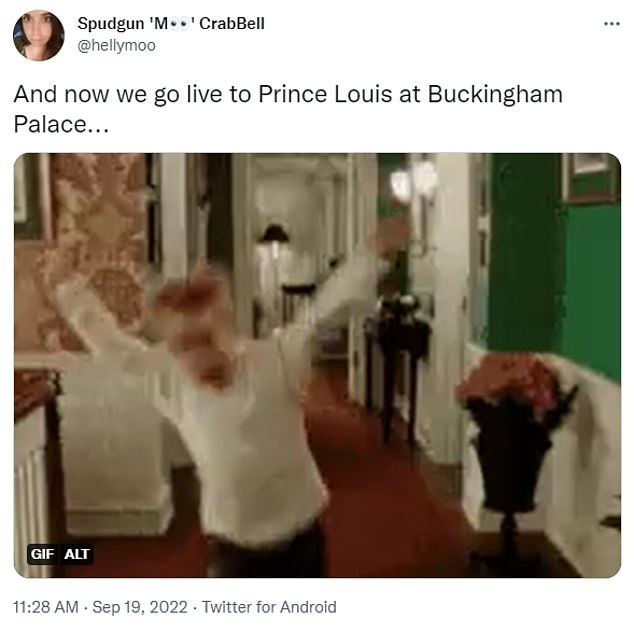 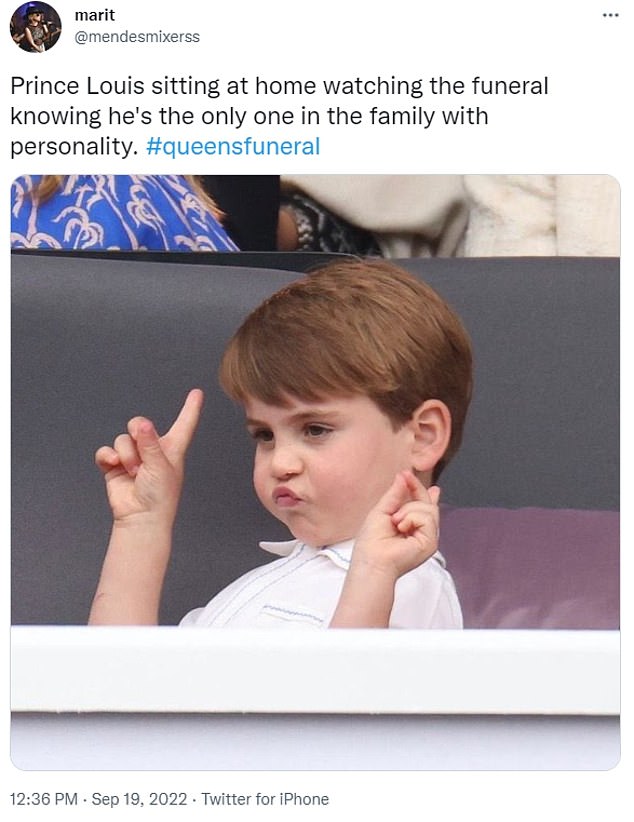 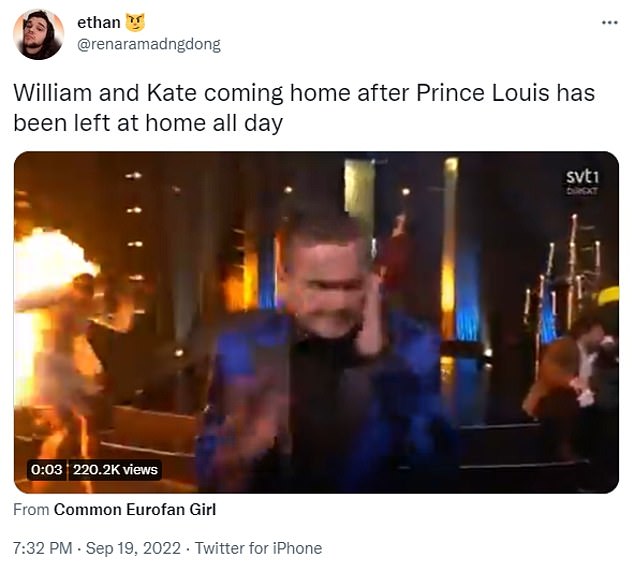 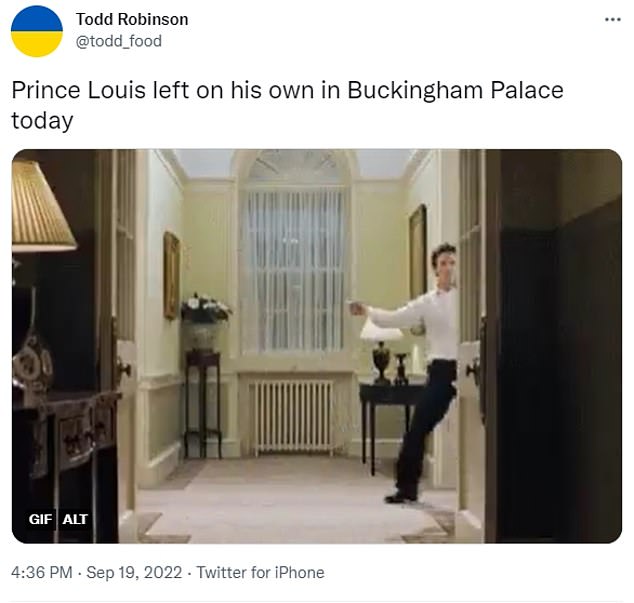 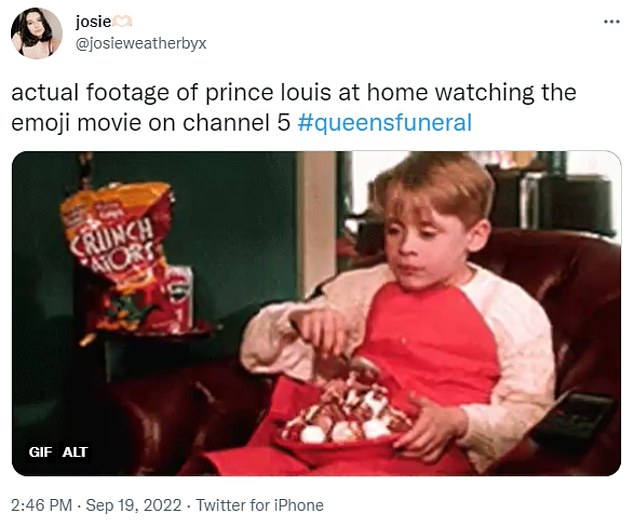 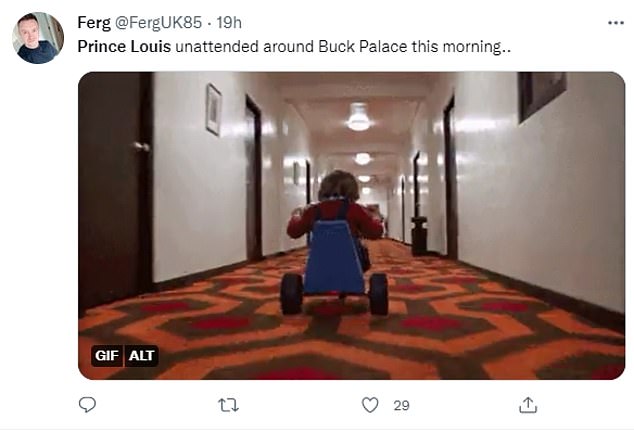 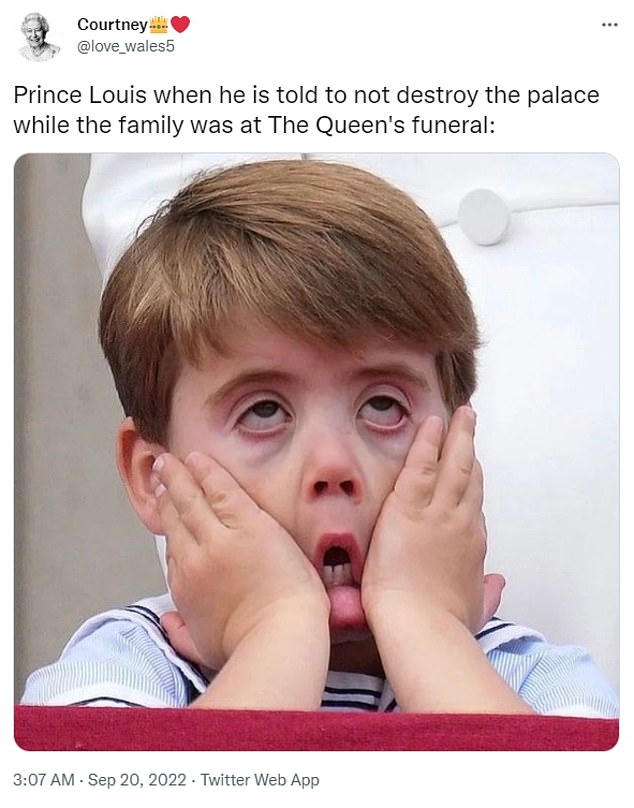 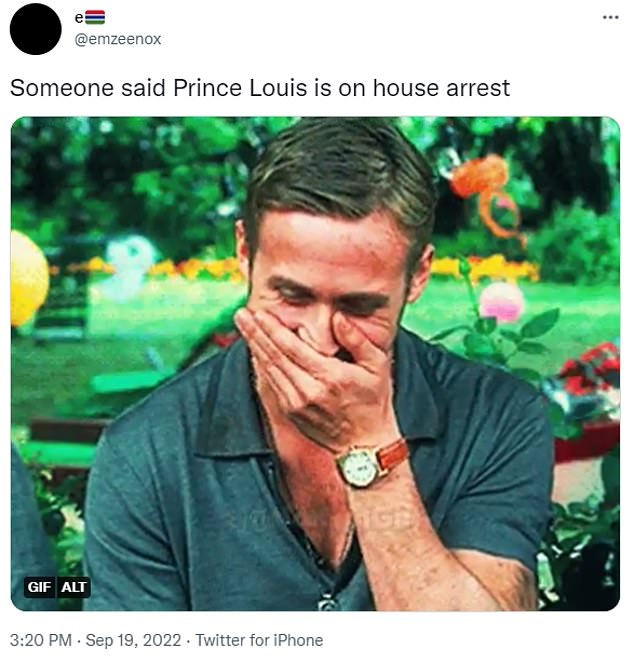 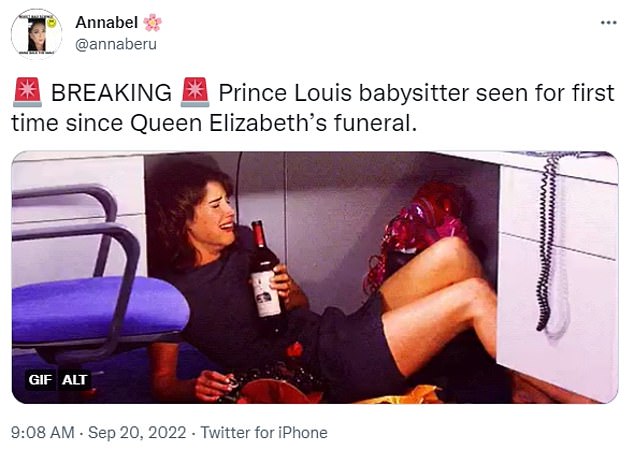 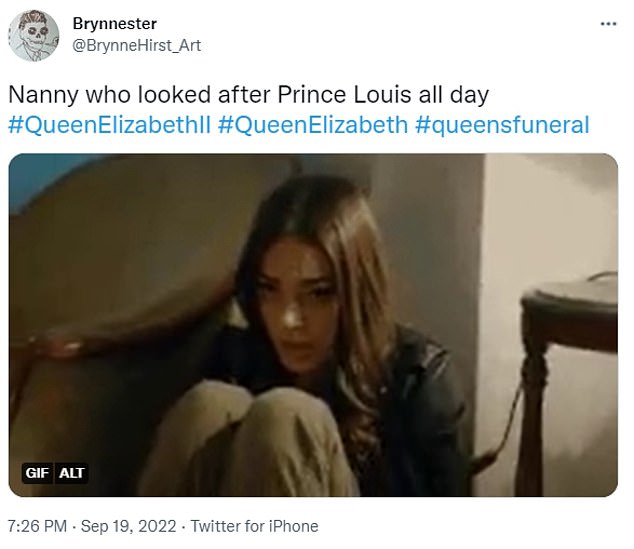 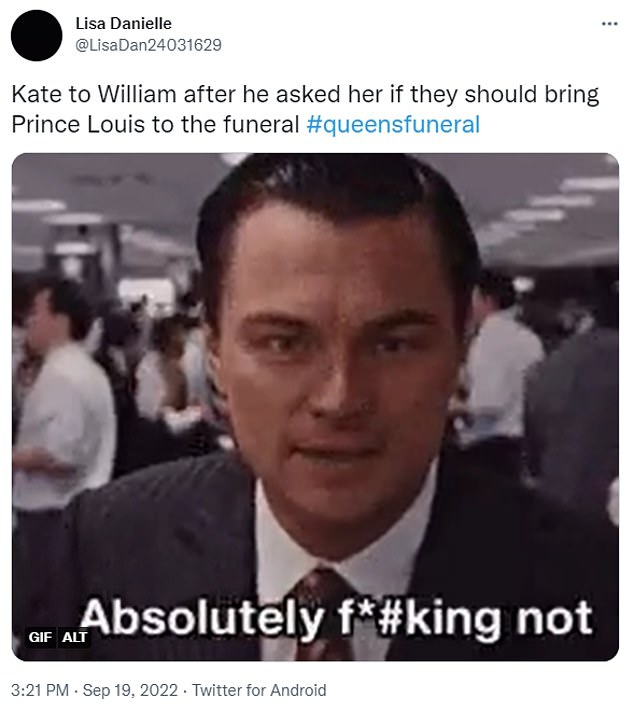 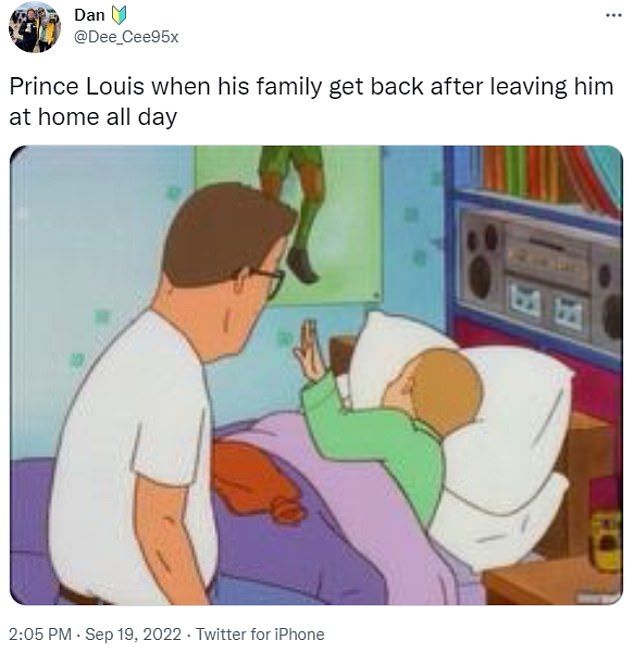 Louis and ‘Gan Gan’ at the Platinum Jubilee: The photos that stole the hearts of the nation

His mother the Princess of Wales earlier revealed how Louis is coping with the death of their great-grandmother the Queen.

Speaking to Australia’s Governor-General at a reception held for Commonwealth dignitaries ahead of the Queen’s funeral today, Kate explained her four-year-old is asking questions and struggling to understand.

Louis has been asking whether the family’s summertime visit to Balmoral Castle will still be as he remembers them.

‘The younger one is now asking questions like, ”do you think we can still play these games when we go to Balmoral’ and things like that, because she’s not going to be there?”’ Mr Hurley said.

The Daily Mail understands that the Prince and Princess of Wales thought ‘long and hard’ about whether their two eldest children, aged nine and seven, should join them.

But after George and Charlotte attended their great-grandfather’s memorial in March, William and Kate decided they could cope with the solemnity of the occasion.

‘As parents they have, of course, thought long and hard about whether their children should accompany them,’ a source said. ‘Of course little Louis is too young, but they think George and Charlotte are up to it.’

Yesterday the future King, Prince George, and his sister, Princess Charlotte, remained impeccably behaved through a long and solemn day as they bid farewell to their beloved ‘Gan Gan’.

The royal siblings, great grandchildren of the Queen, were among 2,000 guests at her state funeral and were the youngest members of the royal family to follow the Queen’s coffin through Westminster Abbey.

They also attended the committal service in St George’s Chapel at Windsor Castle later in the afternoon.

At Westminster Abbey, George, nine, and Princess Charlotte, seven, walked behind the Queen’s coffin as part of a solemn procession before hundreds of guests in the gothic church and watched from afar by a huge international TV audience.

As the young royals followed their great grandmother’s coffin, flanked by their parents, the Prince and Princess of Wales, Charlotte held her hands clasped in front of her, while George had his arms by his side.

The foursome walked a little behind the King, Charles, and Camilla, Queen Consort, and ahead of the Duke and Duchess of Sussex.

The young royals had arrived earlier in a car with Camilla and their mother, Kate.

George was dressed in a dark navy suit and black tie, while Charlotte wore a black coat dress with pleats at the back and a small silver horseshoe pinned on the front, black tights and a hat with a ribbon tied at the back.

Ahead of the service, the Princess of Wales could be seen holding Charlotte’s hand, and giving her a reassuring touch on the shoulder. 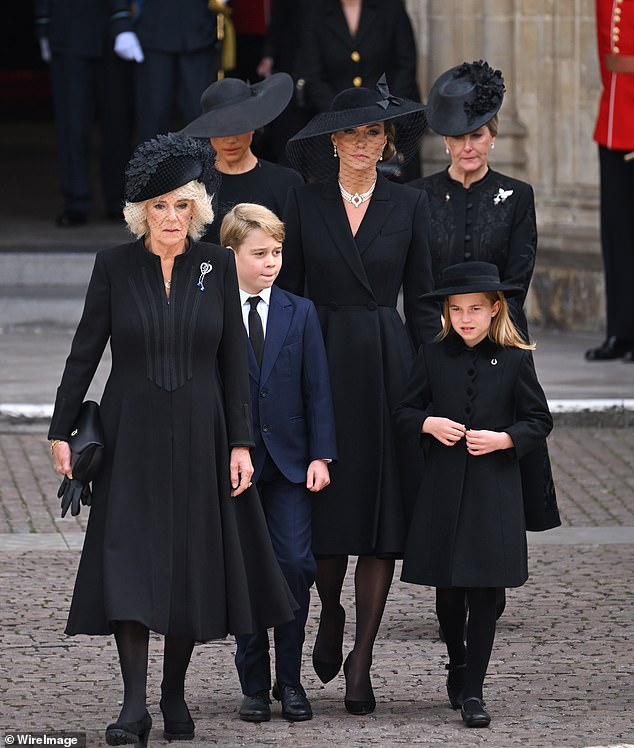 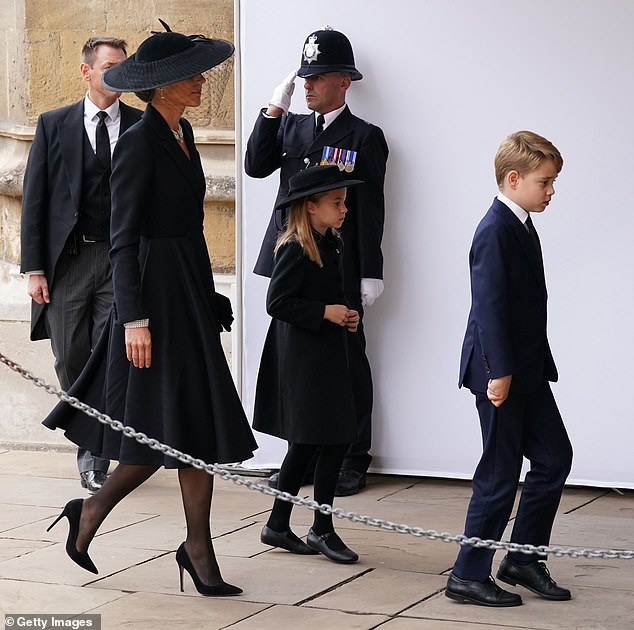 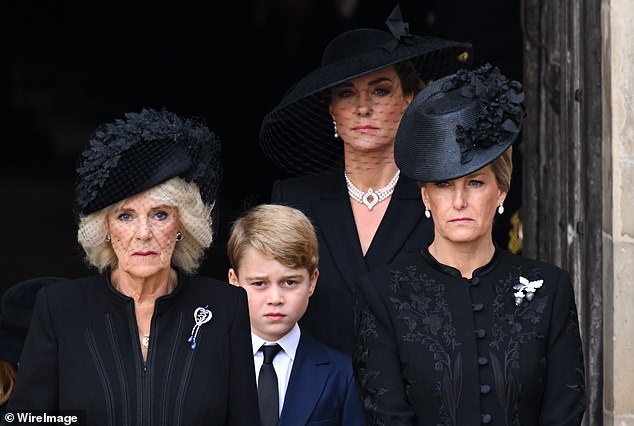 Camilla, Queen Consort, Prince George of Wales, Catherine, Princess of Wales and Sophie, Countess of Wessex during the state funeral

Throughout the service, the children could be seen studying their order of service at various points, with Charlotte looking around from under the brim of her hat while the mourners sang The Lord’s My Shepherd.

And her brother George was seen singing The Day Thou Gavest, Lord, Is Ended as he stood between his parents.

At one point, Kate could be seen comforting her son with a hand on his knee.

At the end of the service, George followed closely behind his father, while Kate put a guiding hand on the back of her daughter, as the foursome got up from their seats and stood behind the coffin.

As they filed slowly out of the Abbey both children looked down at times. They later stood with their mother Kate, Meghan, Camilla and the Countess of Wessex, watching as the Queen’s coffin began its final journey from Westminster. 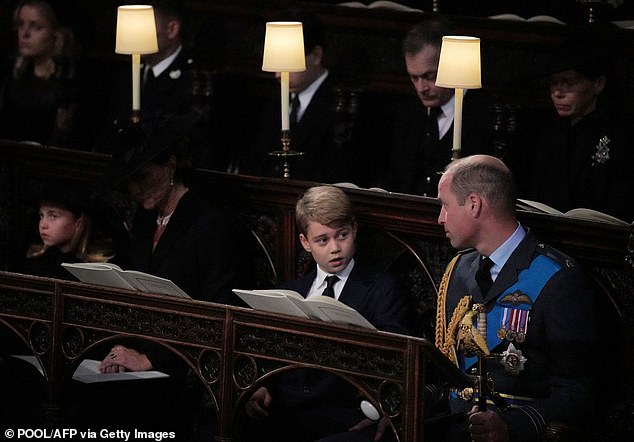 Charlotte, Catherine, George and the Prince of Wales attend the Committal Service 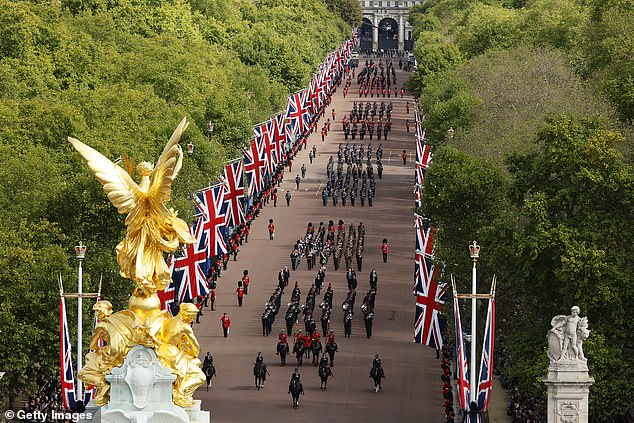 When the coffin reached Wellington Arch, it was transferred to the state hearse to be driven to Windsor, with senior royals watching at the side.

Charlotte clasped her mother’s hand and chatted briefly with her elder brother, gesturing at the coffin as it was carefully lifted off the gun carriage metres away.

At the committal service in Windsor, TV cameras gave only a few glances of the siblings, who remained impeccably behaved despite their young age.

Charlotte was seen exchanging a few words with the Dean of Windsor as the family left the chapel and was ushered to a waiting car.