Prince Louis stole the show as he held his mother’s hand and was guided by his older brother George as the royal family arrived at St Mary Magdalene Church in Sandringham for the Christmas Day Service.

The four-year-old prince had a mischievous look on his face as he walked behind his older siblings Charlotte, seven, and George, nine, on the way to the chapel on the Norfolk Estate. He was accompanied by his mother and father, the Prince and Princess of Wales. The royals were led by the King and Queen Consort.

As the royals walked into the church, a sweet moment of brotherly love was captured on camera as Prince George reached out to guide his youngest brother, who has taken part in his first ever Christmas Day walkabout – a big milestone for Louis, who stole the show during the late Queen Elizabeth II’s Platinum Jubilee celebrations in June.

Today also marks the first Christmas at Sandringham in two years after the late Queen stayed in Windsor for Christmas 2020 and Christmas 2021 due to the  coronavirus pandemic, and the first time the family is spending the holidays since the death of the late Monarch.

A brotherly gesture! Prince George, nine, holds out his hand to guide Prince Louis, four, on the youngest Wales child’s first ever Christmas Day walkabout in Sandringham, Norfolk, while walking with the Princess of Wales and Princess Charlotte, seven

As Prince Louis looked adorable in a black coat and a pair of shorts (traditional for young royal boys until the age of eight), his older sister Charlotte wore the same burgundy coat she had appeared in at the Together at Christmas carol service broadcast on ITV1 last night.

During the service at Westminster Abbey, which had been organised by her mother Kate, Charlotte was front and centre, giggling at the Dean of Westminster’s anecdote about his cat’s fondness for tinsel and lighting up as Hugh Bonneville read an extract from Paddington Bear in tribute to Her late Majesty Queen Elizabeth.

Today Princess of Wales, 40, looked poised in a recycled, military-style khaki coat as she walked to the service alongside her husband, ahead of the other members of the royal family.

Prince Louis, four, looked adorable in a black coat and shorts (which are traditional dress for royal boys until the age of eight) as he joined the Prince and Princess of Wales, nine-year-old Prince George, seven-year-old Princess Charlotte and his grandparents the King and Queen Consort 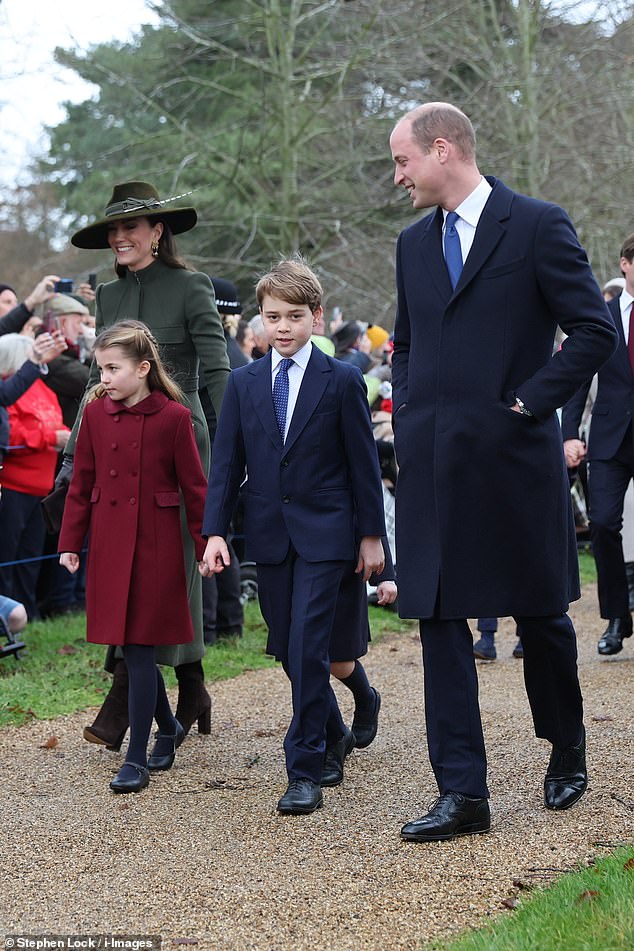 Picture-perfect family! The Wales family walked into St Mary Magdalene Church in Sandringham as they attended the first royal Christmas since King Charles ascended the throne

Kate had previously worn the coat to attend royal engagements in Bradford in January 2020, just days after Prince Harry and Meghan Markle announced they were stepping down as senior royals and moving to the US.

It is the first time the youngest son of the Prince and Princess of Wales’ children has attended, with Prince Louis proudly walking alongside his older siblings and parents.

At four, and after stealing the show during the late Queen’s Jubilee celebrations in June, he is just old enough to sit through the service.

While they are much older than him, it is only the second time that Prince George and Princess Charlotte have attended, due to the cancellations of 2020 and 2021 at the height of the covid-19 pandemic. 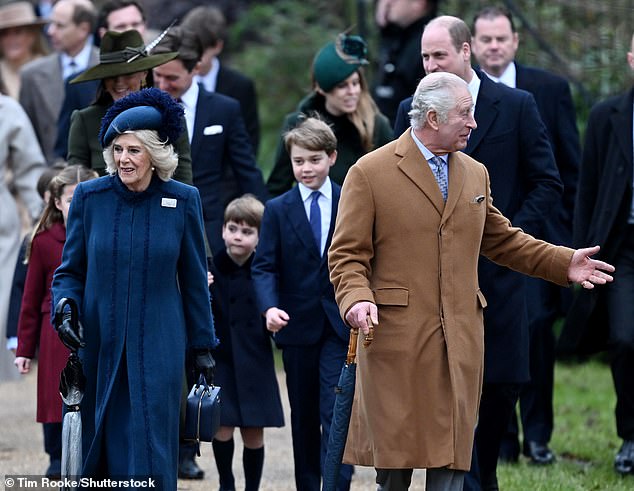 King Charles, 74 and Queen Consort Camilla, 75, led the way as the royal family walked towards the chapel on the Norfolk Estate as the King greeted crowds of well-wishers who had gathered to say hello

Hundreds of well-wishers have been queuing since the early hours to catch a glimpse of members of the royal family, and waved excitedly as the King and Queen Consort drove to the church.

The bittersweet occasion saw the family put on a show of unity as they marked the first Christmas since the death of Queen Elizabeth II, who died on September 8, and after the explosive Netflix documentary of the Duke and Duchess of Sussex.

It is the first time King Charles III is organising the event, marking the beginning of a new era for the royals.

The Prince and Princess of Wales are staying with the King and Queen Consort for the festive holidays, alongside the Earl and Countess of Wessex and their children.

Speaking ahead of the celebrations, Mike Tindall has admitted that the Royal Family’s first Christmas without the Queen will be ‘very different’ as he opened up about his family’s festive plans on his podcast The Good, The Bad &  The Rugby, which he co-hosts with James Haskell and Alex Payne.

Filming a Christmas special of the show for YouTube, Mike – who appeared in I’m a Celebrity Get Me Out Of Here earlier this month – was seen dressed in a Santa hat and wrapped in a strand of gold tinsel.

When asked by host Alex Payne if Christmas for the royals would be ‘very different’, Mike replied: ‘Yeah, it probably will be. I don’t really know, I’m quite looking forward to it.

‘Obviously, there’s a lot of change, there’s lots of firsts.’

This year will be the first time King Charles delivers a Christmas speech to the nation – something the Queen did every year of her 70 year reign.

He is expected to speak movingly about Queen Elizabeth in his first ever Christmas message which will be broadcast at 3pm today.

Smile from a young prince! Louis, four, beamed as he walked into St Mary Magdalene Church in Sandringham, Norfolk 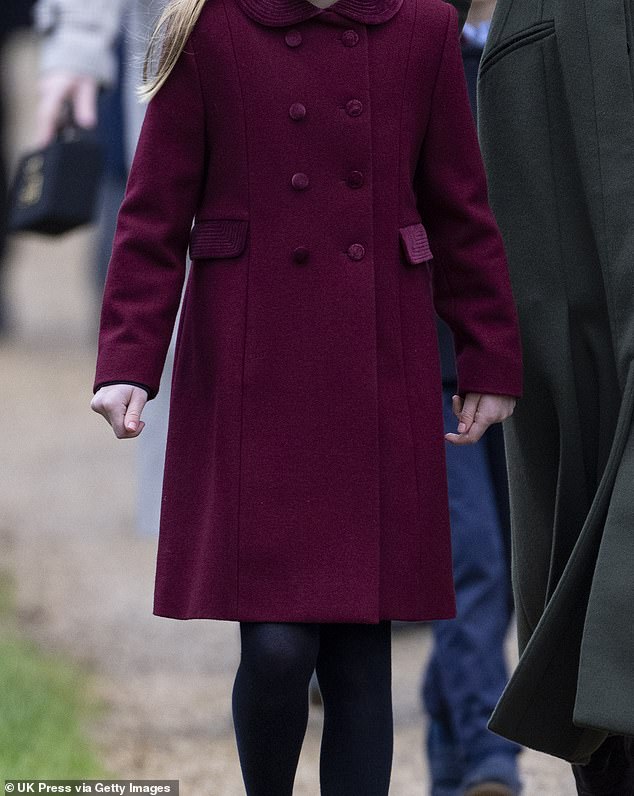 Princess Charlotte, seven, wore the same burgundy coat she had worn during the Christmas carol service, Together at Christmas, at Westminster Abbey which was broadcast last night on ITV1 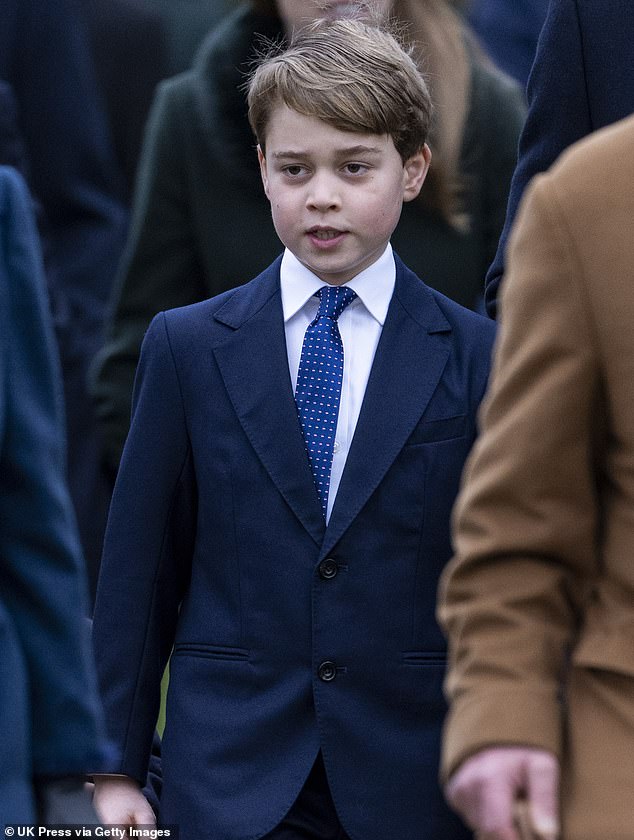 Future king Prince George, nine, looked regal in a sharp suit and tie as he attended only his second ever Christmas walkabout – but he looked ever the professional

The broadcast was produced by BBC Studios Events rather than ITV, whose turn it was to record the King’s first festive address under a rotating producer system between the BBC, ITV and Sky News.

It is believed the royal family went with the BBC because it has ‘experience of shooting in St George’s Chapel this year’.

The royal biographer Sally Bedell Smith told The Times that The Monarch has invited the Duchess of York to spend Christmas at Sandringham with the rest of the family for the first time since her divorce from Prince Andrew.

Meanwhile, the Duke of York will be spending Christmas at the royal estate as well, but did not appear this morning for the public walk to Church.

Yesterday, the country watched as the family put on a show of unity at Kate’s Together at Christmas carol concert at Westminster Abbey.

The event, which was recorded on December 15, was broadcast on ITV at 7:30pm last night to mark Christmas Eve.

Ahead of the event, the Princess of Wales revealed that the heart-warming concert had been dedicated to the late Queen, ‘and to all those who are sadly no longer with us’.

In an introduction shared ahead of the concert’s broadcast, Kate talked emotionally of the late Monarch’s affinity with the festive period ‘as a time which brings people together and reminds us all of important values’.

The 40-year-old royal held her first event last year, which was such a success that she decided to bring it back – in the likelihood that it could become an annual fixture. She said: ‘Last year’s event reminded me what I love most about Christmas, seeing people coming together, celebrating and experiencing special moments, whilst also thinking about the year that’s passed.

‘This Christmas will be our first without Her Late Majesty Queen Elizabeth. Her Majesty held Christmas close to her heart, as a time that brought people together and reminded us of the importance of faith, friendship and family, and to show empathy and compassion.’

This year, the Princess invited hundreds of ‘inspiring individuals’ to the service to recognise their contributions up and down the country.

She described them as: ‘Those who showcase the power of connectedness and community values, allowing us to continue Her Majesty’s tradition of recognising and thanking those who have gone above and beyond to support others.’

And she added: ‘Her Majesty leaves with us an incredible legacy and one that has deeply inspired many of us. This year’s carol service is dedicated to her and to all those who are sadly no longer with us.

‘So, whilst Christmas will feel very different this year, we can still remember the memories and traditions we shared.

‘Take time to slow down and celebrate with family and friends all the wonderful things that make Christmas so special.’

In a £400 black sequin knit crop cardigan, from Self Portrait, she recorded her the message last week during a visit to the Abbey amid final preparations for the service.

Supported by the Royal Foundation, the service was held at Westminster Abbey on December 15 and was attended by scores of senior royals including Their Majesties The King and Queen Consort.

The programme was narrated by Catherine Zeta-Jones, and featured tributes to Her Majesty The Queen and short films highlighting individuals who go above and beyond to support others.

King Charles ‘evicts Prince Andrew from Buckingham Palace after Epstein scandal and will no longer be allowed to have an office in the building or use its address for correspondence,’ source claims

And King Charles takes charge of Royal Christmas: Fergie will lunch with family at Sandringham as Harry and Meghan stay away but Prince Andrew WON’T join others in Christmas Day walk to church