EXCLUSIVE: Prince of Wales will NOT attend England’s World Cup quarter final against France this weekend – but may decide to travel to Qatar if they reach semi-finals

The Prince of Wales has declined the chance to attend England’s World Cup quarter-final against France on Saturday, but may travel to Qatar next week if Gareth Southgate’s side reach the semi-finals.

The Duke of Cambridge is also president of the FA and a big England fan, and previously attended the 2010 World Cup as a supporter.

He went to England’s final warm-up game against Peru at Wembley before the 2014 tournament, but Roy Hodgson’s side crashed out at the group stage which ruined his plans to travel to Brazil.

The Prince also opted to stay away from England’s group B clash against Wales, although Kensington Palace sources indicated this absence was due to his busy schedule rather being a deliberate decision to boycott the tournament.

Prince William has declined the chance to attend England’s World Cup quarter-final against France on Saturday. Pictured:  Prince William (left) along with Catherine, Duchess of Cambridge (right) and Prince George (centre) applaud prior to the UEFA Euro 2020 Championship Round of 16 match between England and Germany at Wembley Stadium on June 29 last year 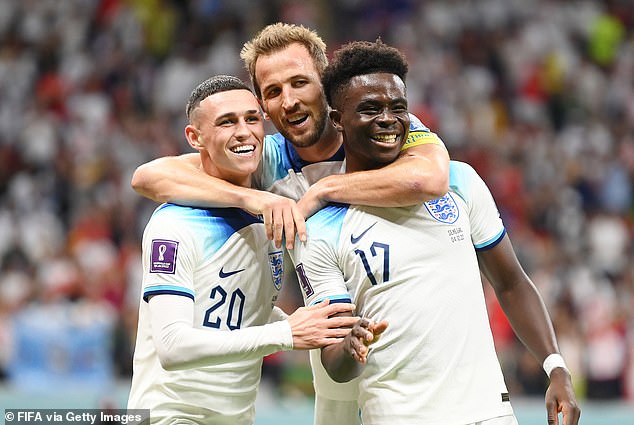 England’s Bukayo Saka (right) celebrates with Harry Kane (centre) and England’s Phil Foden (left) after scoring the Three Lion’s third goal during the World Cup round of 16 football match between England and Senegal, at the Al Bayt Stadium in Al Khor, Qatar, on Sunday

The Duke and Duchess of Cambridge have just returned from the United States after travelling to Boston last week to attend the Earthshow Prize Awards, an environmental project he founded, where they met president Joe Biden.

The Prince would form part of a government delegation including senior ministers if he opted to attend an England semi-final rather than attending in a personal capacity.

Sports Minister Stuart Andrew was in Doha for England’s win over Wales last week and Lord Ahmad of Wimbledon, the recently appointed Minister for the Middle East, North Africa and South Asia is still in the country.

The Prince’s apparent willingness to travel to Qatar contrasts with his approach to the 2018 World Cup in Russia, which he stayed away from altogether despite England’s run to the semi-finals. 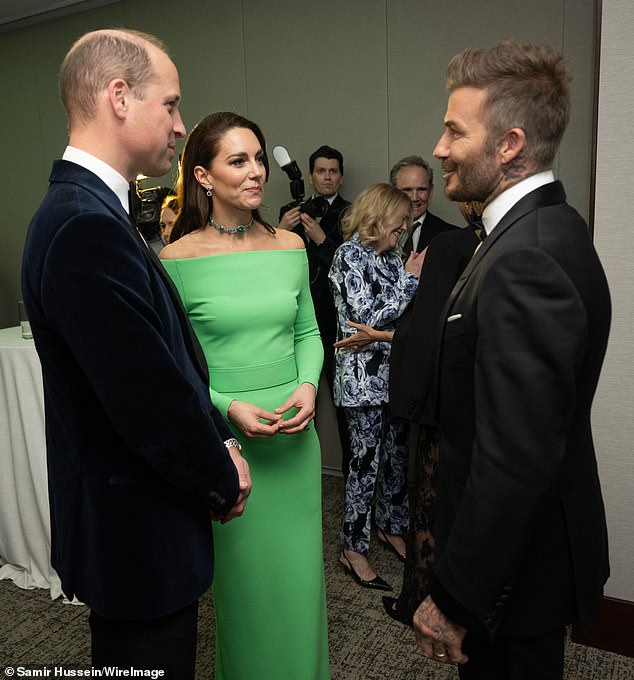 The Duke and Duchess of Cambridge (pictured) have just returned from the United States after travelling to Boston last week to attend the Earthshot Prize Awards. Pictured: Prince William, Prince of Wales, Catherine, Princess of Wales and David Beckham speak backstage after The Earthshot Prize 2022 at MGM Music Hall at Fenway on Friday 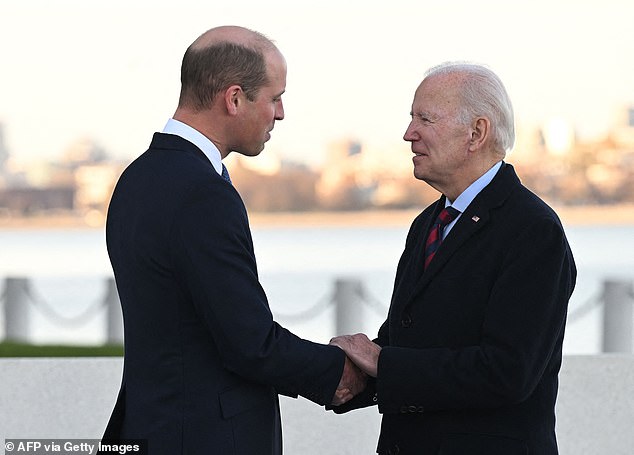 That decision was announced several months before the tournament at a time of growing political tension between the UK and Russia following the poisoning former spy Sergei Skripal in Salisbury.

The government’s relations with Qatar are far better despite repeated criticism of the country’s treatment of migrant workers and the LGBTQ+ community.