Prince Philip was a ‘heaven-sent consort’ for the Queen, Lady Prudence Penn says

Prince Philip was ‘extremely practical’ and ‘heaven-sent consort’ for The Queen as he would always ‘boost her ego’, a former lady-in-waiting for the Queen mother has said.

Lady Prudence Penn, 95, who is a close friend of The Queen, spoke to Tatler for their July edition which honours the Duke of Edinburgh in a special commemorative issue.

Speaking to the magazine, which is out just before the royal would have turned 100, Lady Penn discusses how the Philip ‘tackled everything with enthusiasm and skill’ and how he once told her off for jumping off a wall and breaking her leg.

She also reveals he has ‘a lot in common with ‘his predecessor Prince Albert, the prince consort’ but he ‘always decried the comparison’.

Prince Philip was ‘extremely practical’ and ‘heaven-sent consort’ for The Queen as he would always ‘boost her ego’, a former lady-in-waiting for the Queen mother has said. The Queen and Prince Philip are pictured in 2007 to mark their diamond wedding anniversary

‘He was one of the most practical men I have ever met. He was intensely interested in so many things, always curious to know more and, if possible, to make improvements,’ Lady Penn said.

‘On one occasion he dropped in for lunch with me at my house in Scotland en route to a carriage driving event. It so happened that a few days before, I had broken my leg and it was in plaster.

‘I had been trapped in my walled garden, the door having jammed, and the only way I could think to escape was to climb onto a low stone wall and jump down the other side – a drop of about 10 feet. It was the wrong decision.’

‘After lunch he wanted to inspect the scene of the accident and, in his usual practical way, explained to me how I should have handled the situation: “Never launch yourself off a high wall, turn around to face it holding the top and lower yourself with your hands.” With hindsight, of course, he was right.’

‘Any task he took on, he tackled with enthusiasm and skill. In many ways, I always felt that there were great similarities between him and his predecessor Prince Albert, the prince consort. I actually said that to him at the time and he decried it. I think I was right.’

‘I loved the way he would boost the Queen’s ego by telling her how lovely she looked on their way to an engagement.’ 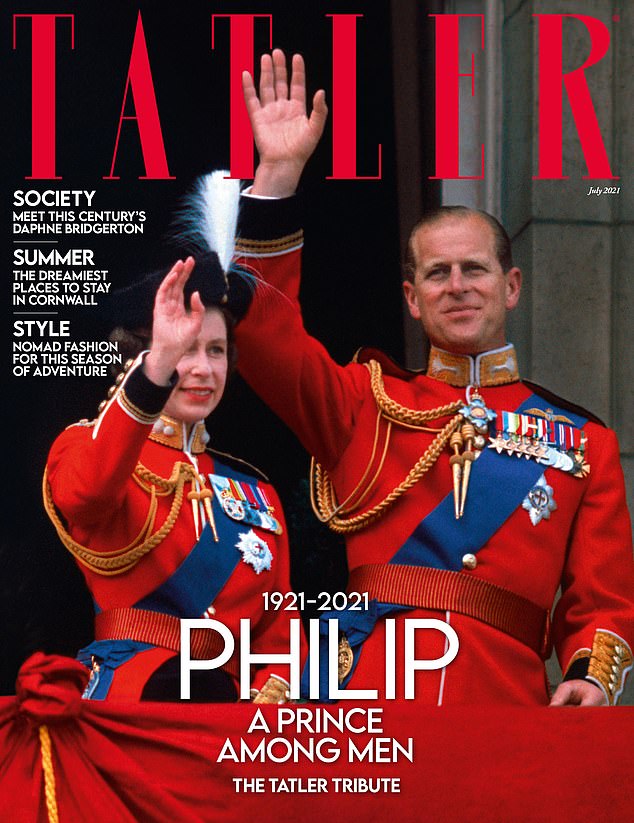 Lady Prudence Penn, 95, who is a close friend of The Queen, spoke to Tatler for their July edition which honours the Duke of Edinburgh in a special commemorative issue.

‘To my mind, the Duke of Edinburgh was a heaven-sent consort for Her Majesty in every way.’

Lady Penn is one of three writers discussing the Prince in the upcoming issue of the society bible which comes just months after he passed away aged 99 at Windsor Castle.

Hugo Vickers is a broadcaster and biographer of Queen Elizabeth, the Queen Mother writes:  ‘His main focus was on supporting the Queen. He relieved her of the running of the royal estates. He used to say that, unlike other men, he did not have to earn his living or support his family, so he was free to explore other projects. I do not subscribe to the view that he hated walking two steps behind the Queen.

‘Unlike Prince Claus of the Netherlands (who suffered from depression) or Prince Henrik of Denmark (who was less than supportive to his queen in many ways), Prince Philip had been brought up as a relatively minor member of the Greek royal family. He knew the system and he worked within it – and, in a way, around it.’ 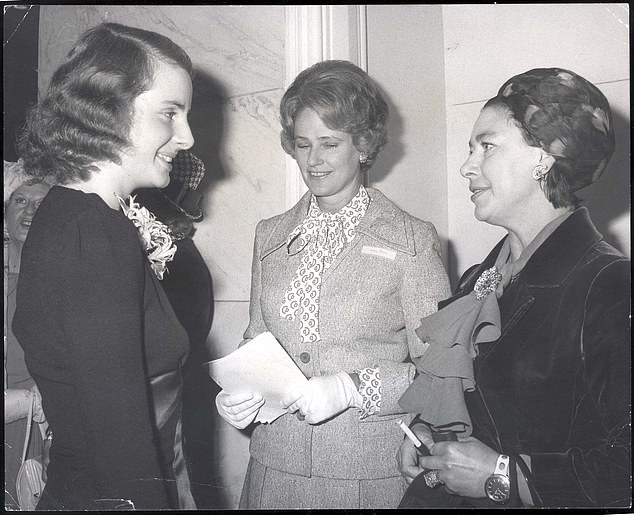 ‘He was totally consistent. You knew where you were with him. He cared not a jot for what people thought of him. He got on with the job.’

He added that Philip’s humour was ‘intrinsic to his character and served as a release from the royal straitjacket’ and that he was ‘never dazzled by status’.

‘The new Queen possessed an abundance of qualities that would make her an exceptionally good monarch, but Prince Philip’s restless energy and strident opinions made him rather less obviously cut out to play the supporting role, required to address his wife as “Ma’am” in public and bow whenever she entered a room,’ he said.

Philip Eade, author of Young Prince Philip, added that the royal’s ‘relentless energy’ helped the Queen become ‘an exceptionally good monarch.’ The Queen is pictured on the way to Philip’s funeral last month

‘The prince scarcely went out of his way to win over his detractors, and his refusal to ingratiate himself was a big part of the reason why the young Princess Elizabeth fell in love with him, accustomed as she was to the fawning deference of palace servants.

‘Having more royal blood in his veins than she did, he was also never going to be dazzled by her status, still less obsequious.’

‘Philip continued to exhibit a joshing attitude throughout his time as consort. It was intrinsic to his character and served as a release from the royal straitjacket. But behind the scenes he was a crucial support for the Queen, bolstering her confidence in private and acting as a more relaxed companion in public, enabling her to overcome her shyness in the same way her mother had with the stammering George VI.

‘The young Queen found it far from easy to put people at ease, her conversational gambits a little stiff, her smile too controlled to be encouraging. Whenever the awkward possibility of silence loomed, Prince Philip was adept at sauntering up and saying something to diffuse the tension and allow conversation to flow. His breezy irreverence was evident even at formal dinners at Buckingham Palace, when he was apt to study a menu written in elaborate French and remark cheerily to the guests: “Ah, good. Fish and chips again.’’

The July issue of Tatler, available on newsstands and via digital download on Thursday 27th May